Description. Preparatory female. Body (measurements of most segments unable to be made owing to torn body).

Carapace ( Fig. 7 View FIGURE 7 A). Broader than long, one pair of mid-lateral setae; rostrum round.

Pereonites ( Fig. 7 View FIGURE 7 A). Pereonites 4 and 5 longer than 1 –3, 6 and pereonites 1 and 6 shorter than 2–5, all rounded laterally; one pair of simple setae on anterior corners; hyposphaenia present on all pereonites.

Antennule ( Fig. 7 View FIGURE 7 C). First article about 2.5 times as long as second and third articles combined; inner flagellum with four articles; outer flagellum with ten articles, with one aesthetasc each on articles 4, 5, 6, and 8.

Pereopod 1 ( Figs. 8 View FIGURE 8 F, 9 A). Basis about 2.2 times as long as broad, with one spiniform and one simple seta on ventrodistal margin. Ischium naked. Merus longer than broad, about as broad as basis, with one dorsal and one ventral spiniform seta and with several simple setae on ventral margin. Carpus about one-third length of merus, with two ventrodistal and one dorsodistal serrate spiniform setae. Propodus shorter than carpus, with five ventral and two dorsal serrate spiniform setae. Dactylus represented by a sensory organ, about as long as propodus, with numerous long, terminal sensory setae and with one short simple seta on inner surface; unguis absent. Exopodite (broken off, Fig. 8 View FIGURE 8 G) present, with three plumose setae.

Cheliped ( Figs. 11 View FIGURE 11 D, E). Propodus more robust than that of female, about 1.2 times as long as broad (not including fixed finger), with a setal row increasing in length distally adjacent to dactylus attachment; cutting edge with two large teeth. Dactylus cutting edge with one medial triangular tooth, one spinule just anterior to tooth, and a few short spinules posterior to tooth.

Etymology. Named for Dr. Charles Messing, professor and mentor, who introduced the author to research in marine biology and to the study of Tanaidacea   .

Remarks. Kalliapseudes messingi   , n. sp. is the first member of the genus to be reported from the northwest continental shelf of Australia and is distinguished from all other congeners by (1) the presence of two small medial setae ( Fig. 12 View FIGURE 12 C) on the dactylus of pereopods 4 and 5, (2) the female having a tuft of sensory setae subterminally on the dactylus of pereopod 6, and (3) having three plumose setae on the cheliped and pereopod 1 exopodite. Only one sixth pereopod remained intact on the adult male allotype and subadult male paratype and they did not have the subterminal tuft of sensory setae on the dactylus. It is not known whether this structure was lost or if it represents a sexually dimorphic character. Until further specimens can be studied, it is tentatively placed in K. messingi   .

The antennal peduncles on the females of K. longisetosus   and K. messingi   appear to be composed of four articles; whereas, antennal peduncles on the males of these two species appear to have five articles. Shiino (1966) also recognized this phenomenon in K. tomiokaensis   . The presence of a four or five-articulated peduncle has often been used as a diagnostic feature for distinguishing individual species within the Kalliapseudidae   ( Guţu, 1996; 2001). I therefore recommend that this character be interpreted with caution and that in future taxonomic and systematic studies on this family the antennae of both males and females be carefully examined to determine the number of articles present.

Table 1 View TABLE 1 lists the distribution of all the known members of the genus Kalliapseudes   . A key for the separation of the known kalliapseudid genera and species from Australian waters is presented here. 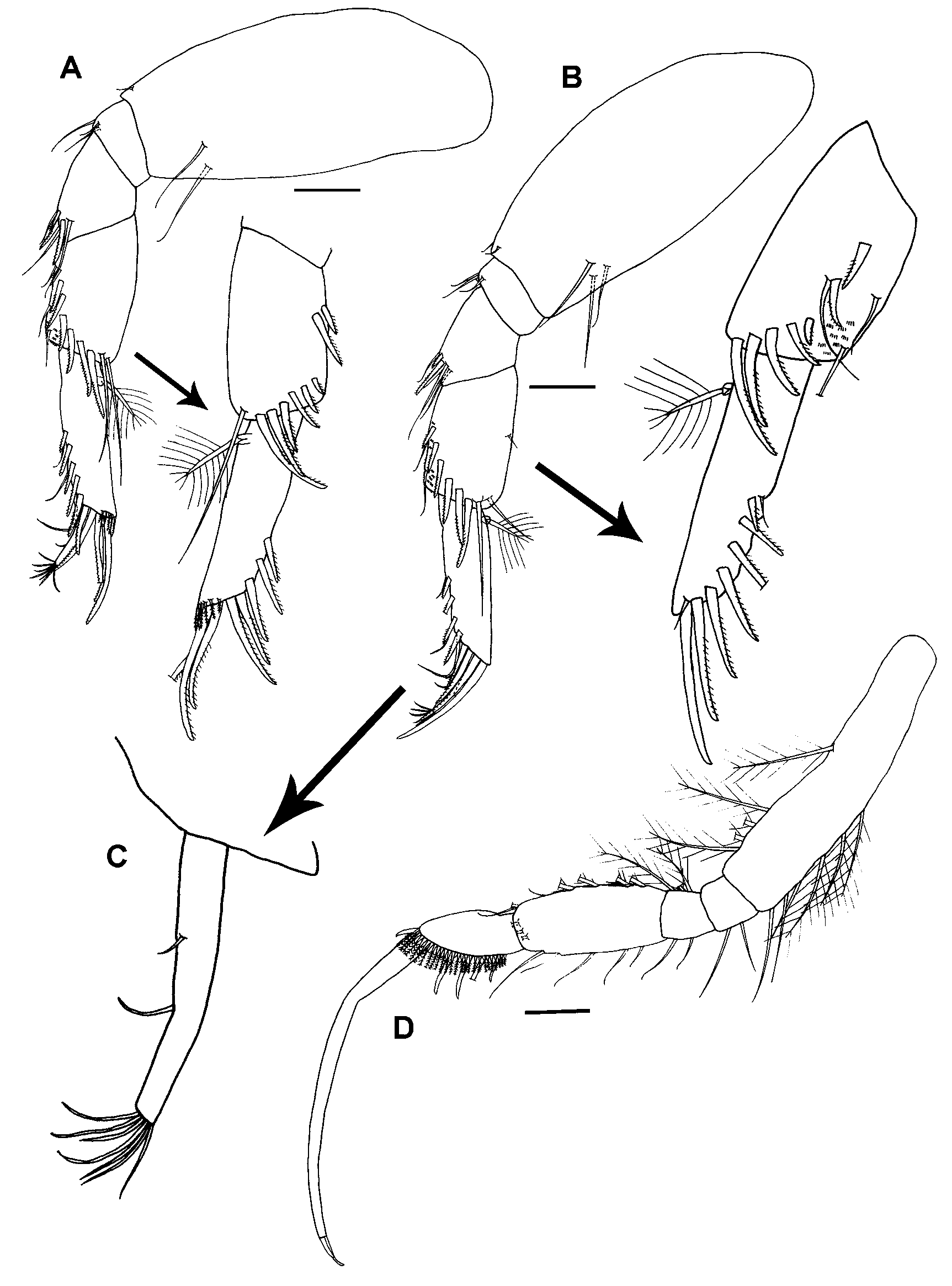