Color. General color pale yellowish-straw; very faint pigment reticulation on prosoma (anterior and lateral borders, and both sides of the ocular mound), pedipalps (femur, tibia), legs I–III (femur, patella, tibia) and area V and free tergites; most scutum very pale, though in some specimens there are faint reticulate stripes on the scutal areas too. Leg IV of female of the general color. Leg IV of male darker (sclerotized appearance): coxa with same color as scutum except for the distal border and the prolateral apophysis, hazel-orangish; same color on trochanter, femur, patella and tibia, only distal end of femur and tibia slightly lighter; metatarsus and tarsus of the general color. Ventral surface of coxae quite uniform, slightly more hazel-orangish than the dorsum, with darker borders of coxa-trochanter articulation near stigmata. Color of smaller males tend to be more uniform than larger ones. Some females are exceptionally uniformly light hazel-orangish.

Trochanter IV elongated, armed with distinctive apophyses; one prodorsal sub-basal apophysis, ear-like and sclerotized; a marked prodorsal thickening of the apical border, from which a large, blunt prodorsal apophysis emerges, oriented upwards; a strong, acute retroventral apical apophysis, pointing caudad; in addition, 2–3 small conical apophyses (or acute grains in some specimens) on the retrolateral side.

Femur IV sub-straight, only weakly curved to the median line, gradually and slightly thickening towards the apical end; it is covered by longitudinal rows of conspicuous granules and a few distinct apophyses; retrolateral side with a sub-basal, small acute apophysis, and a row of 3–5 acute apophyses on distal half, with increasing size, ending in a large subapical one; proventral row of 4–5 smaller apophyses on the distal one third, ending in a large apical one; retroventral row insinuated by taller grains on the basal and distal portions, it ends in a rudimentary retroventral apical apophysis.

Patella IV: dorsal side densely covered by rounded grains; on the ventral side grains are taller and acute, ending in two large apical apophyses: a proventral, bifid one (seldom as two separate, close apophyses), and a retroventral apophysis.

Male genitalia ( Fig. 5View FIGURE 5). Distal end of trunk markedly swollen and curved (first dorsad, then ventrad), so that the distal end is ventrally shifted from the trunk axis. VP subrectangular, slightly wider at the base; distal border straight; macrosetae forming two groups on each lateral: 3 apical C macrosetae, short and strong, transverse, and 3–4 longer basal macrosetae A, diagonally pointing proximad; a small macroseta D aligned to the C group, and two rudimentary macrosetae E, ventrally of the latter; the basal group has also one smaller ventral macroseta B. Ventrolateral surface of VP covered by two independent spiny fields in its whole extension, reaching the distal end of trunk. Subdistal portion of glans has a dorsad projected border. Stylus emerges in a single stem, then diverges from VPS; stylus smoothly bent dorsoapically, it bears heavy backward-pointing spination on its ventral border; VPS curved, its flabellate tip (with irregularly scalloped margins) points dorsad, thus giving the apical end of the glans a forked appearance.

Distribution and field observations. Qorimayus alticola  was collected in a reduced area (two localities separated by less than 5 km), on the eastern slope of Sierra de Famatina, La Rioja province, Argentina ( Fig. 7View FIGURE 7). The Famatina range originated in the Ordovician— i.e., it is older than the Andes—and behind the latter, is the second most elevated massif in South America ( Cei 1982). Its most outstanding feature, the ‘Nevado del Famatina’, covered by a permanent snow cap, has the highest peak in the non-Andean interior of Argentina (Cerro General Belgrano, 6097 m a.s.l.). The Sierra de Famatina has a remarkable biogeographical interest, because of its semi-insularity (surrounded by xeric basins), and its recognition as a relevant area of endemism. Aagesen et al. (2012) listed 27 endemic vascular plants in this range, of which 21 exist above 1500 m a.s.l., the highest record at 4090 m a.s.l. Barboza et al. (2016) updated this number to 28 endemic entities (25 species, 3 varieties), out of 909 taxa (692 species, 34 subspecies, 137 varieties, and 5 forms) they counted in their checklist of Famatinan vascular plants. Famatinanthus  ( Asteraceae  , monotypic) is the only endemic plant genus in this area ( Barboza et al. 2016). Examples of endemic animals include two lizards, Liolaemus famatinae Cei, 1980  , and Phymaturus mallimaccii Cei, 1980  , captured between 3600 and 4200 m a.s.l. ( Cei 1980, 1982); a bothriurid scorpion, Orobothriurus famatina Acosta, in Acosta & Ochoa, 2001  , with records at 2450–3060 m a.s.l. ( Acosta & Ochoa 2001), as well as several high-Andean bird subspecies ( Nores 1995).

The general landscape is dominated by aridity, thereby making the presence of a gonyleptid completely unexpected when ascending the slopes. Up to 2400–2500 m, the lower parts of this mountain are covered by the xeric Monte shrubland ( Cei 1982). It is followed by an herbaceous / arbustive transition belt at 2400–3500 m a.s.l., above which the physiognomy changes into the high Andean vegetation, dominated by grasses and pulvinate plants. From 4500 m a.s.l. onwards vegetation is scarce and is replaced by periglaciar rocky substrate ( Cei 1982). These altitudinal limits and the general conditions may vary dramatically, depending on the topography and the orientation. For example, on the road to Mina La Mejicana aridity reaches up to 3170 m a.s.l. (see Acosta & Ochoa 2001 for a map), so that all collecting efforts for harvestmen yielded negative results there. A different situation was met on the 4WD track to the type locality (Mina El Oro), which borders the Río Oro (also known as Río Amarillo). From approximately 2400 m a.s.l., the river canyon becomes narrower, and the vegetation (not more than grasses and shrubs, indeed) starts to look contrasting green ( Fig. 8View FIGURE 8), slightly more humid than the xeric surroundings ( Acosta & Ochoa 2001). I captured Qorimayus alticola  between 2450 and 2550 m a.s.l. under rocks, in grassland and scrubland on the slopes. This species showed a weak bluish fluorescence under U.V. light, a feature known for a few other gonyleptids, like Pachyloidellus goliath Acosta, 1993  (fluorescence is yellowish in the latter; Acosta et al. 1995). U.V. sampling required much less effort than manual search, and enabled me to detect many specimens climbing at night on the vertical wall along the path cut on the hillside. A remarkable feature of those captures was the high proportion of ‘soft-bodied’ specimens, suggesting that in December (i.e., the end of spring) the final molt to reach adulthood happened shortly before. In manual search (specimens sheltered under rocks) 60% of the individuals were soft-bodied, and the male-female ratio was 1:4. With U.V. light (specimens active at surface) the proportion of soft-bodied individuals decreased to less than 7%, and the male-female ratio turned to 2:1. When captured, Q. alticola  rapidly elicited its defensive secretions, resembling the quick response of the well studied Pachyloidellus goliath  (as described in Acosta et al. 1993); however, secretions themselves look different, consiting in Q. alticola  of a dense white fluid with a curious smell recalling synthetic adhesives (no chemical analysis was available). No other gonyleptid was found in the area, but an undetermined Ceratomontia  ( Triaenonychidae  ) was caught at 2550 m a.s.l., under stones. 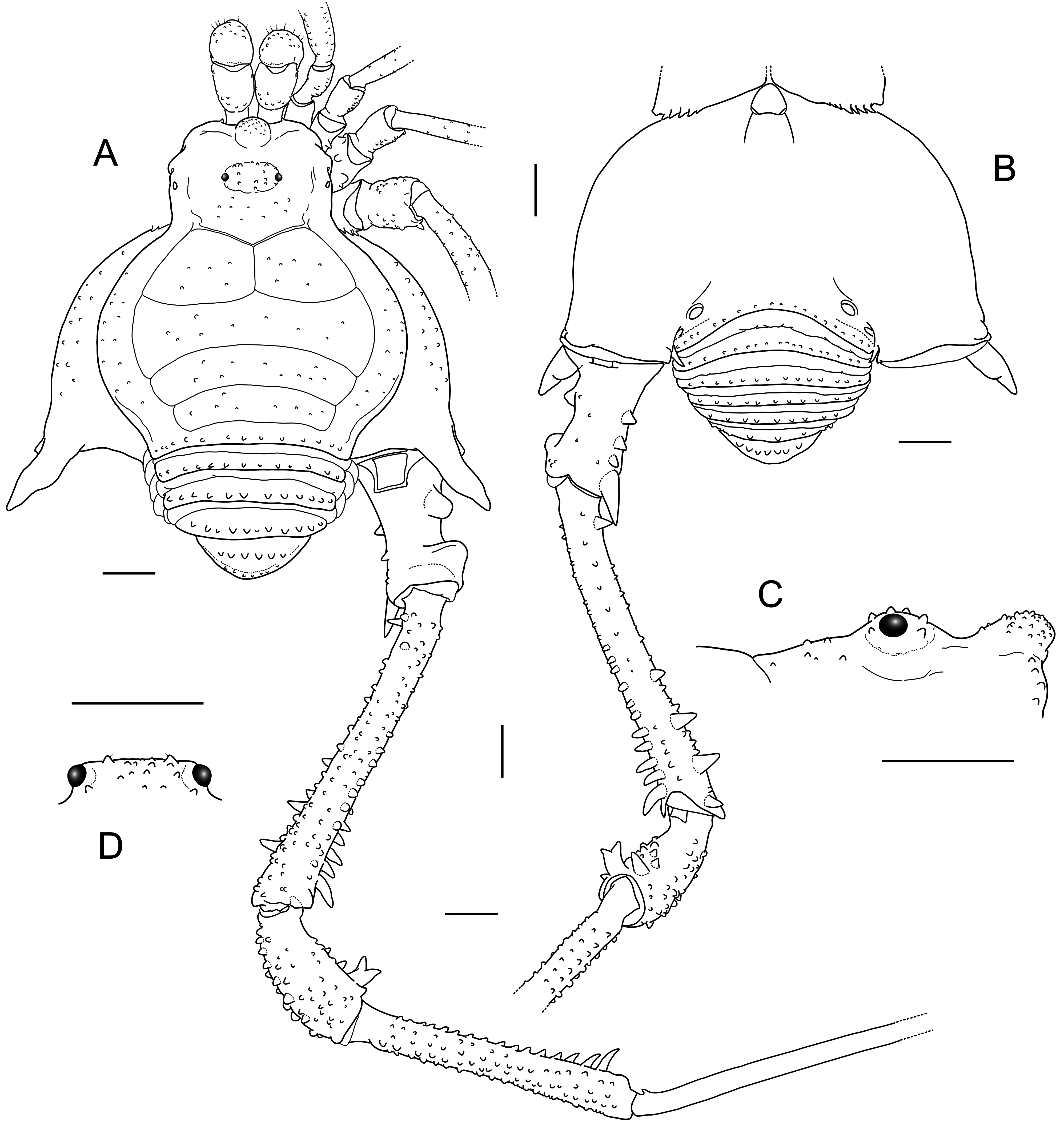 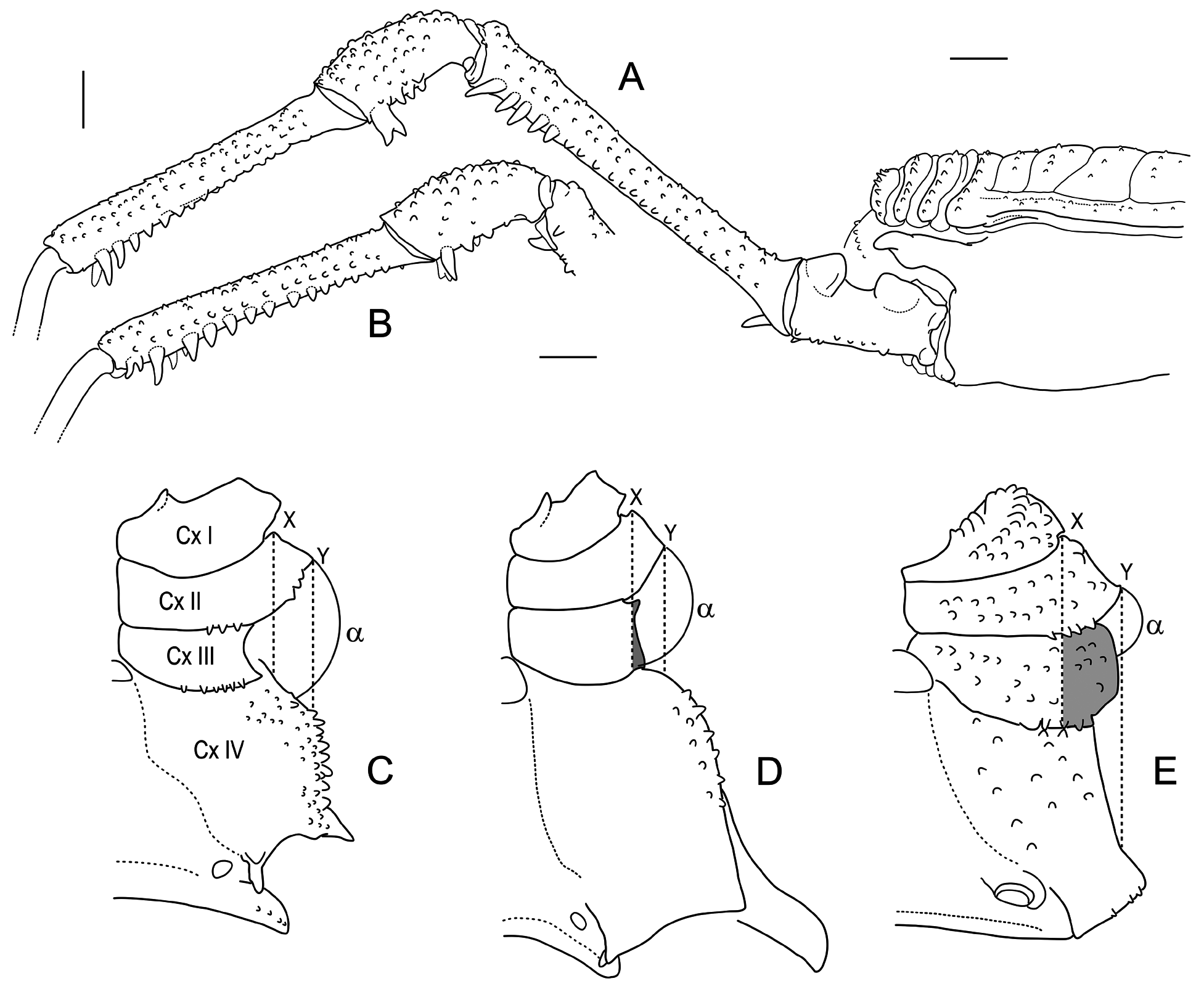 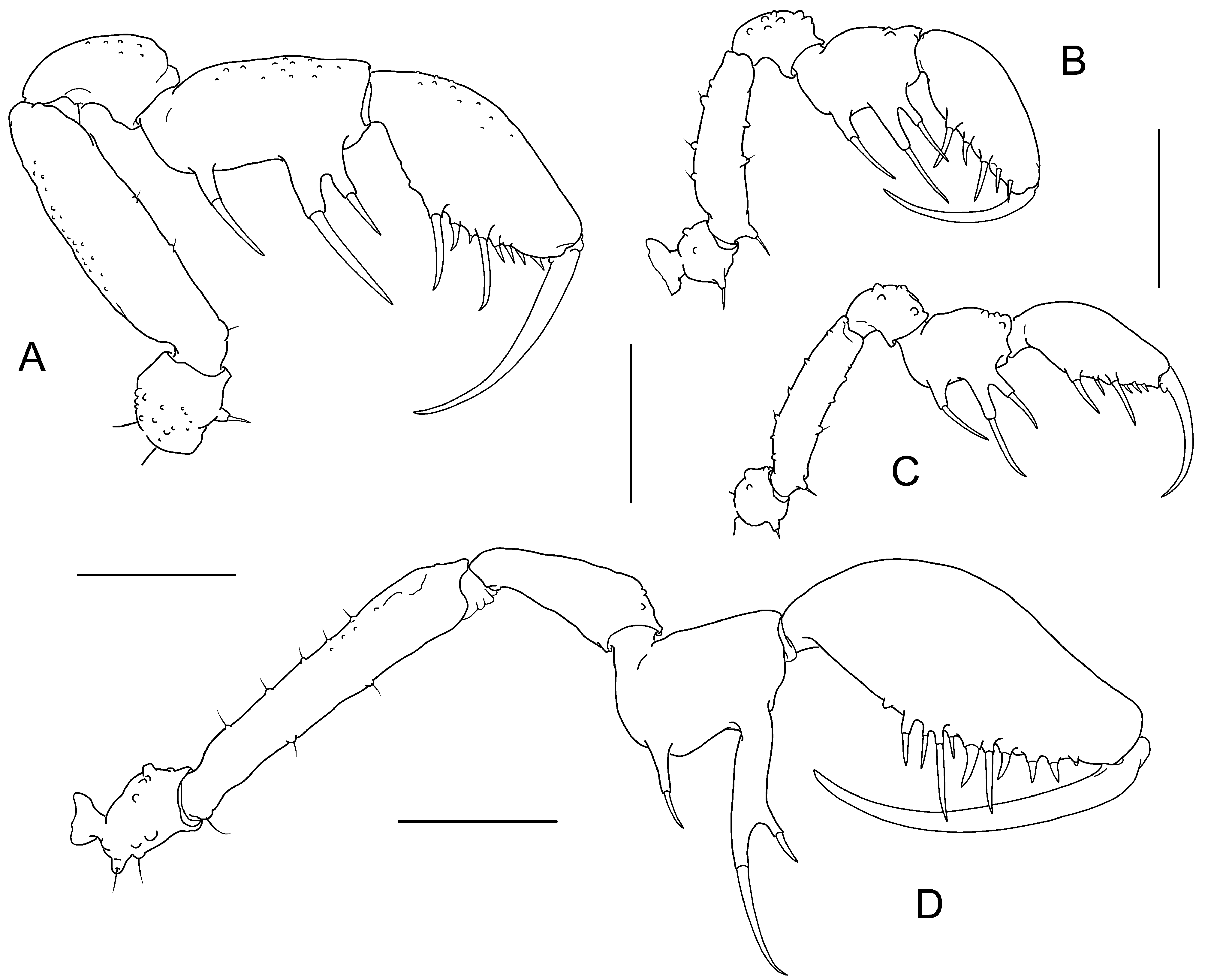 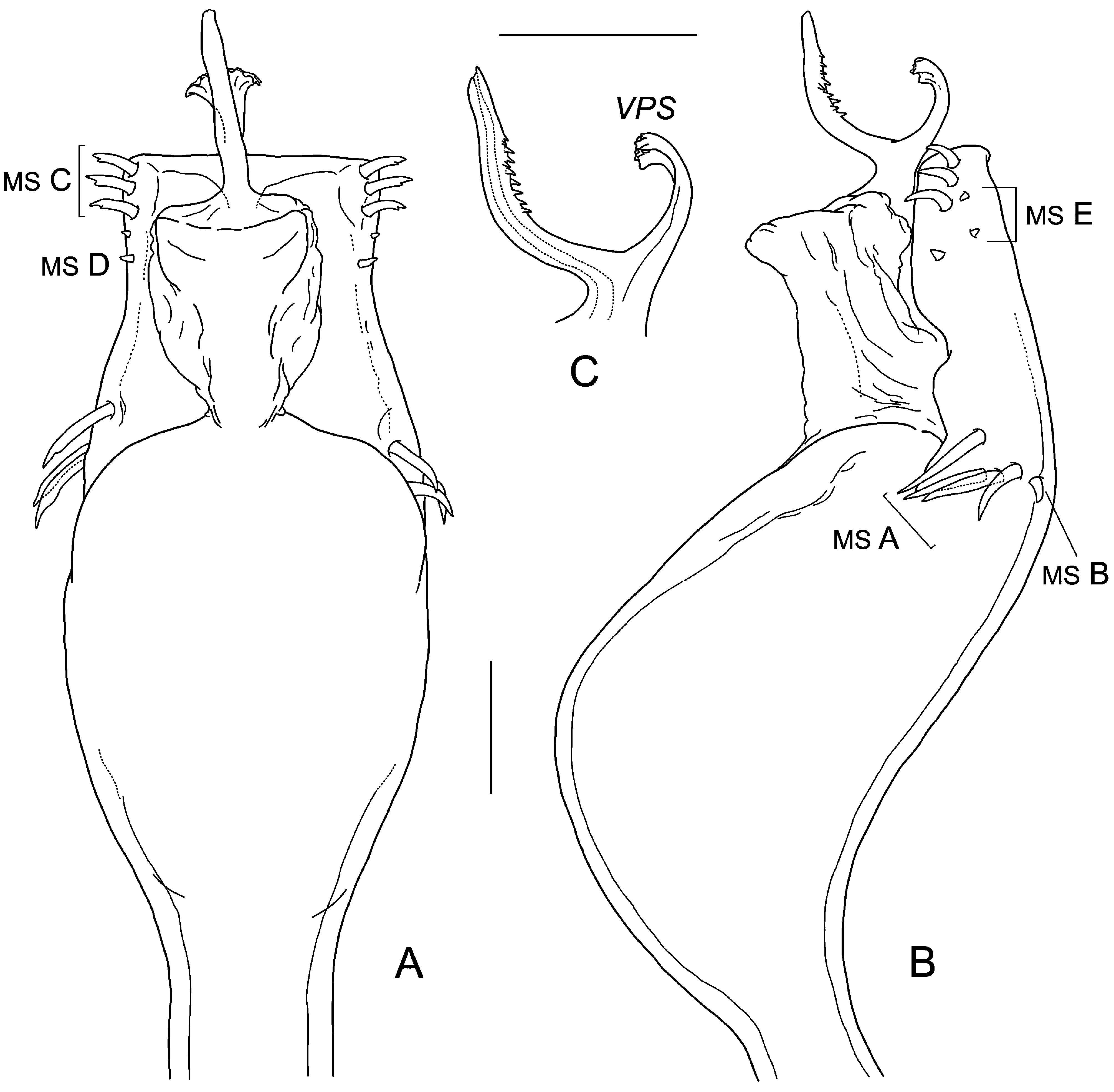