Remarks. Sakai (2017) presented the following argument for the new genus and family: “ Neoaxius nicoyaensis sp. nov. as described below, is very characteristic in that it possesses highly unique morphological features of the genital organs, which cannot be found in any species of any genera of the families currently included in the superfamily Axioidea. This means that this new species could not be classified under any of the genera of these families. That is precisely why the new species is to be classified under a new genus established in the present paper, as Neoaxius nicoyaensis gen. et sp. nov. ”. By genital organs he presumably meant the unmodified pleopod 1. Most decapods have a modified first male pleopod so this finding should have been seen as suspect to any knowledgeable reviewer as it was to us.

Study of the holotype of Neoaxius nicoyaensis shows clearly that Sakai has overlooked the small, uniramous first pleopods that are still attached (flexed on right side) on the ventrally narrow pleomere 1 ( Fig. 1A, B View FIGURE 1 ). He dissected the right pleopods 2–4, interpreted one of either the third or fourth as pleopod 1 (fig. 2A) labelling the other pleopod 3 (fig. 3D) and correctly figured pleopod 2 (fig. 3B); all were erroneously stated to be from the left side.

As the ‘unique’ character used to establish the new higher taxa is based on an error, Sakai’s (2017) reasons to establish a new genus and family lack any justification. Neoaxius is hereby synonymised with Guyanacaris and Neoaxiidae with Axiidae .

Although Sakai (2017: 504) mentioned in his remarks on the new family that the new genus is similar to Litoraxius Komai & Tachikawa, 2008 , he compared his new species with Guyanacaris hirsutimana in his table I, referring to two specimens (the holotype USNM 137428 from British Guyana and one male, SMF 31827 View Materials , from Pacific Costa Rica) he had dealt with earlier ( Sakai 2011). This table contains—besides the misinterpreted pleopod 1—other errors: (1) the holotype of G. hirsutimana has a postcervical carina as figured by Boesch & Smalley (1972: fig. 1) and Sakai (2011: fig. 22B); (2) G. hirsutimana sometimes also possesses distinct carinae on pleomeres 1 to 5 as shown by Blanco-Rambla (1995: fig. 11g). Sakai (2017) overlooked the prominent spines near the cervical groove (see Fig. 1C View FIGURE 1 ) that are typical of G. caespitosa .

Guyanacaris is known from two species, G. hirsutimana from the Atlantic (Gulf of Mexico to British Guyana) and G. caespitosa from the Pacific ( Mexico to Colombia). Squires (1979: table 1) outlined the differences between the two species, noting that the median carina of G. hirsutimana has eight spines while that of G. caespitosa has three. The specimen ( MZUCR 1665-01) attributed to G. caespitosa by Dworschak (2013) had more than three. That this specimen was found only about 30 km west of the type locality of N. nicoyaensis supports the synonymy of the two species.

Sakai (2011) reported two specimens of G. hirsutimana (the Atlantic species) from the Pacific, one from Golfo Dulce, Costa Rica ( SMF 31827 View Materials ) and one from Peru ( RMNH D31563 View Materials ). We could not study those specimens, but they are certainly attributable to G. caespitosa . Sakai’s (2011) account with almost identical diagnosis for both species of Guyanacaris shows that he was not aware of their differences. 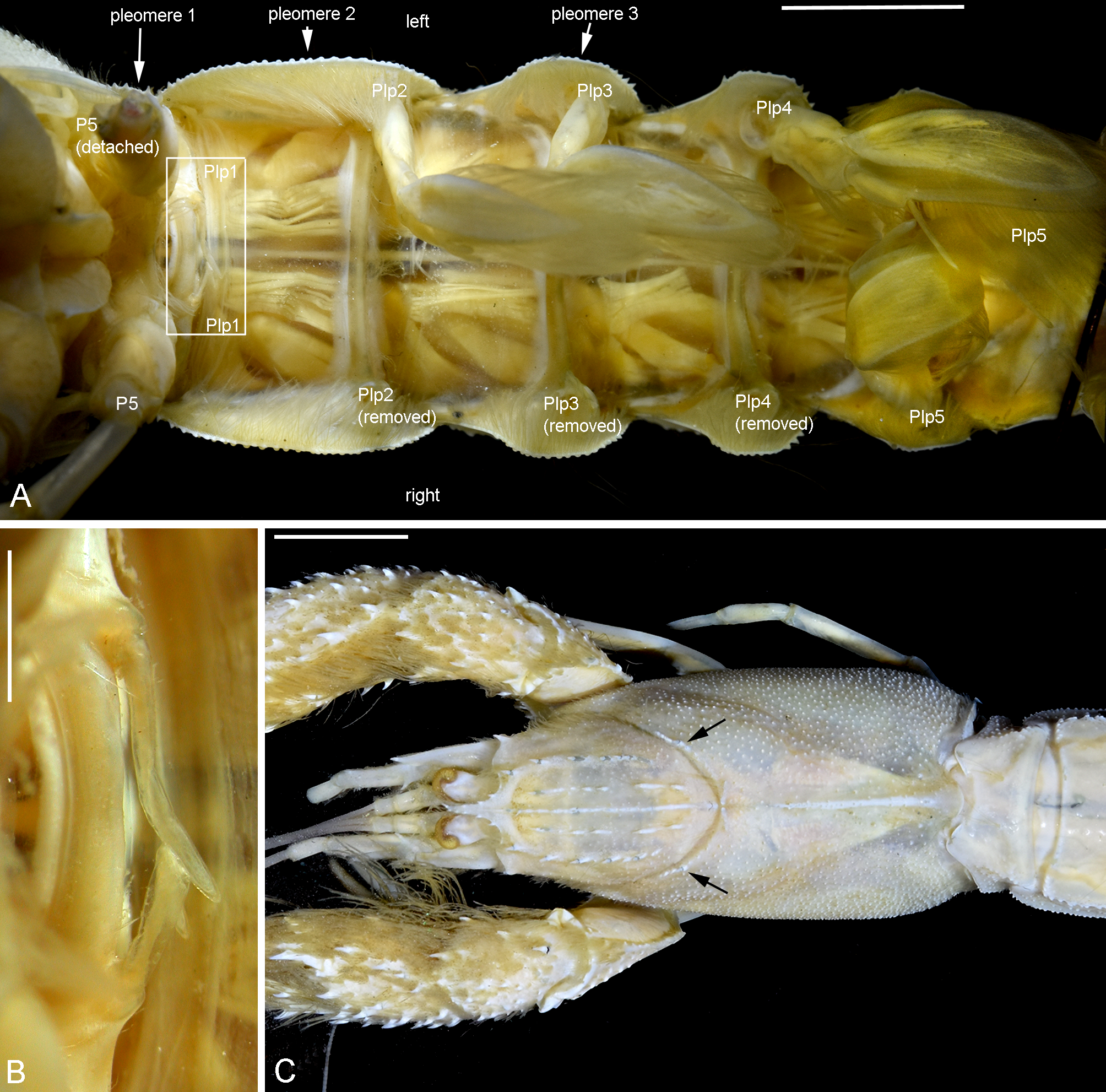