Description. Variable in shape ( Figs. 4a–d View FIGURE 4 ), but rather persistently shallow cup-shaped, bumpy-irregular outside, optically smooth inside. Largest size in situ (the paratype, Figs. 4c–d View FIGURE 4 ) up to 16 cm in diameter, 15 cm high, of which a fragment of 4 x 2.5 x 2.5 cm was retrieved. The holotype ( Figs. 4a–b View FIGURE 4 ) is about half the size of the paratype, and two fragments were preserved, each of which is 2 x 2 x 2 cm in size. If the Barbados material is indeed conspecific then size may be up to 20 cm high. Surface rough to the touch, consistency hard, incompressible, somewhat crumbly. Oscules not apparent, but in the cup-bottom of the paratype a cluster of small openings is visible. Colour alive greyish white, on deck and in preservation light beige.

Skeleton. Ectosome consisting of a dense layer of oval microrhabds, pierced here and there by the cladi of subectosomal calthrops. Choanosomal skeleton thoroughly confused, without radiate architecture. Calthrops of all sizes are strewn randomly in the interior, separated by few canals and open spaces. Microscleres abundantly present throughout the choanosome.

Ecology and distribution. On limestone rockwalls and in the sand at their base, depth range 153–232 m. Bonaire, Barbados.

Etymology. The name honors Dr Paco Cárdenas, in acknowledgement for his great efforts to make sense of the phylogeny and classification of tetractinellid sponges.

Remarks. Our material is close to but apparently not the same species as the holotype of P. abyssi Schmidt, 1870 , redescribed recently by Cárdenas & Rapp (2012). Aside from the usual Pachastrella complement, this has rare dichotriaenes and more robust amphiasters and also spiraster-like amphiasters, unlike our specimens. Furthermore, the diversity of microrhabds in P. abyssi is larger with fat curved and elongate microstrongylote forms added to the oval ones. It is likely but not entirely certain that our material is the same species as the Barbados material of Van Soest & Stentoft (1988). In the Barbados specimens the microrhabdose streptasters, which were only rarely observed in our specimens, are quite common and thicker. The oval microrhabds/ microstrongyles of the Barbados specimens are thinner and more centrotylote, and the largest calthrops have smaller cladi than in the present material. According to Cárdenas & Rapp (2012) the variability of specimens of Pachastrella is unusually large making delimitation of closely similar species difficult, so for the time being we assume the Bonaire and Barbados specimens to be conspecific. Molecular research may be helpful in determining species diversity in the Caribbean Pachastrella . Cárdenas & Rapp (2012) insist that Pachastrella abyssi has a complement of small smooth oxeas, suggested to have been overlooked by Van Soest & Stentoft (1988). However, many of such oxeas are likely foreign as they appear typically haplosclerid in shape and size. Part of our present material also possessed lots of such small oxeas, 150–200 x 6–10 µm, but this is attributed to a green-yellow thin crust seen to grow over part of the specimens in photos made of them on deck. 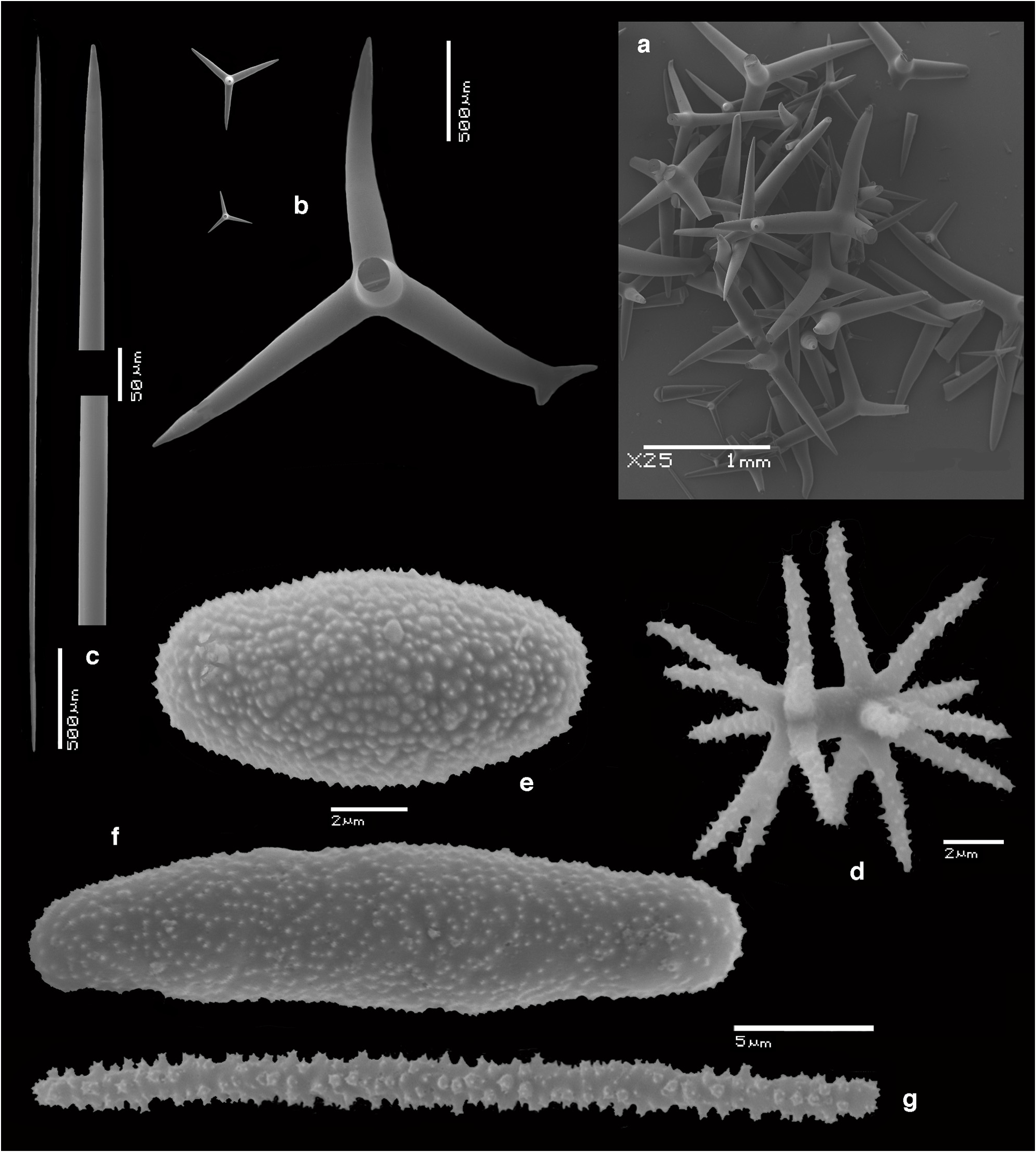