Description. Bright orange sponge, thinly to massively encrusting limestone rockwalls ( Fig. 10a View FIGURE 10 ). Size several dm 2 in lateral expansion, about 2–3 mm in thickness. The holotype consists of a dozen small fragments ( Fig. 10b View FIGURE 10 ), each approximately 1 cm 2 or less, sucked off from the rock. Surface smooth. No apparent oscules visible in situ nor in the fragments. Consistency hard.

Acanthomicrorhabds ( Fig. 11d View FIGURE 11 ), densely distributed on the surface of the discotriaenes and strewn in the interior, in a single rather uniform size range, 15– 20 – 25 µm.

Ecology and distribution. On vertical walls, in the upper dysphotic zone, at Bonaire.

Etymology. adhaereo (L.) = to cling to, referring to the habit thinly encrusting on rocks, which is so far unknown in the genus.

Remarks. From the Western Atlantic several Discodermia species have been reported, but only two species are currently considered accepted unequivocal species of Discodermia , viz. the type species of the genus, D. polydiscus ( Bowerbank, 1869) , originally from Saint Vincent, subsequently reported from Barbados ( Van Soest & Stentoft 1988), and D. dissoluta Schmidt, 1880 from Cuba, subsequently reported from various localities across the Caribbean, and also herein (see Table 2 View TABLE 2 and Fig. 21c View FIGURE 21 ). Our new species differs from these two species by the encrusting growth form, whereas D. polydiscus is cup-shaped and D. dissoluta a group of cylinders. Further clear differences are the single category of microstrongylote microscleres, whereas the two other species have separate categories of microxeas and microstrongyles, and the very short rhabds of the discotriaenes which are only about 40 µm, while those of the other two species are always over 100 µm, even up to 170 µm in D. polydiscus . An interesting feature of our new species is the presence of proliferated discotriaenes, which appear to form a link with the underlying desma-skeleton, providing zygosed margins locking into the peripheral desma skeleton. No such zygosed discotriaenes have been reported in the literature so far, but possibly these have gone unnoticed in other species.

A fourth Caribbean Discodermia species might be D. inscripta ( Schmidt, 1879 as Collinella ), but the type material is deciduous and no discotriaenes or microscleres have been found in it ( Pisera & Levi 2002), making the species incertae sedis. On the eastern side of the Atlantic, several further species have been reported, D. ramifera Topsent, 1892 , D. verrucosa Topsent, 1928 , and D. polymorpha Pisera & Vacelet, 2011 . None of these species conforms closely to our new species in shape and spiculation. 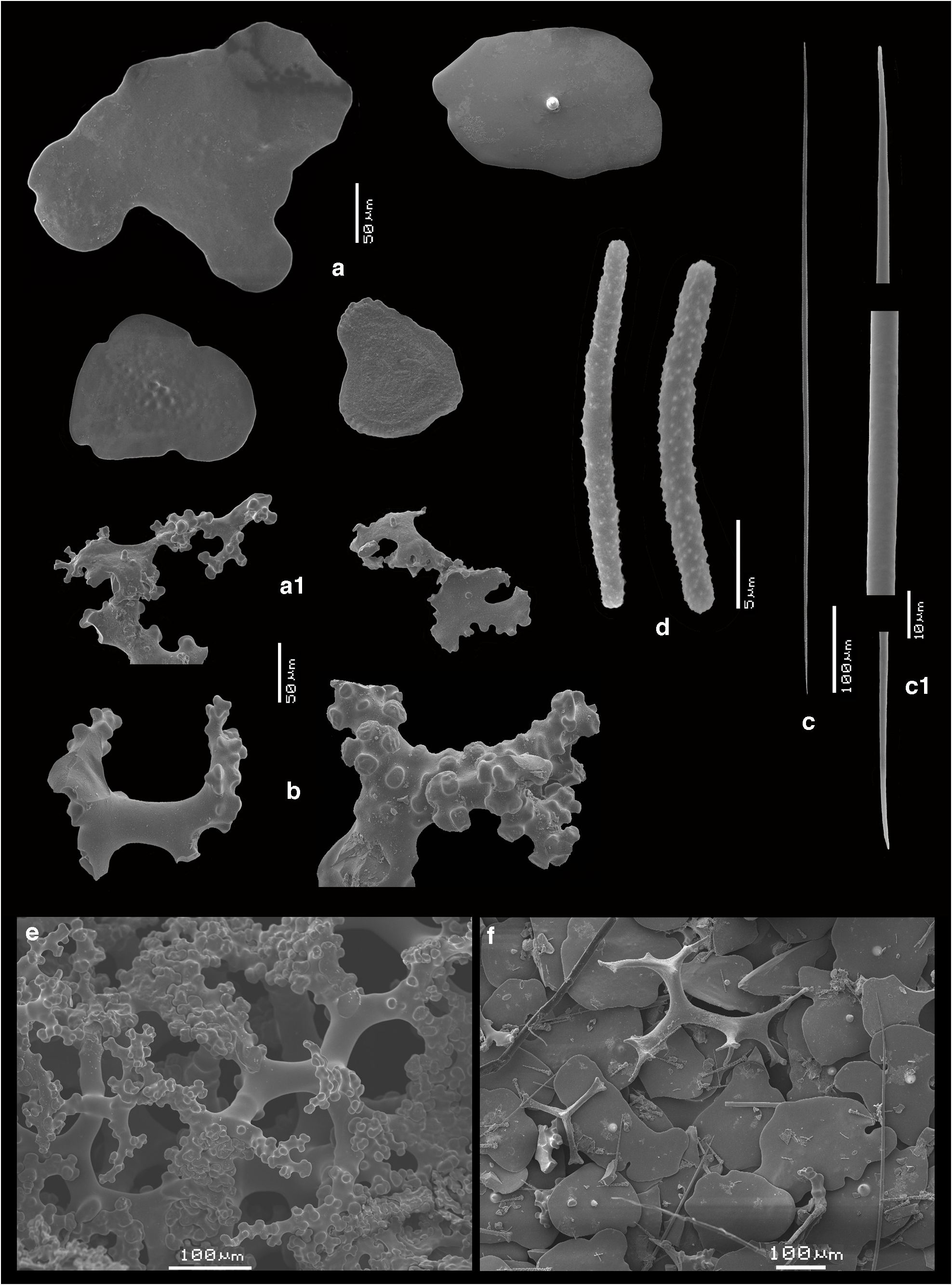