Skeleton. The surface skeleton ( Fig. 19e View FIGURE 19 ) is a vague tangential reticulation of single spicules or two or three aligned spicules. Underneath there are regularly distributed subdermal spaces of 200–400 µm diameter. The choanosomal skeleton ( Fig. 19f View FIGURE 19 ) is isotropic but with a superimposed anisotropic orientation as is typical for many Neopetrosia species. There is little or no visible spongin.

Ecology and distribution. In the mesophotic zone at or around the 100 m mark, off the SW coast of Bonaire; at 120 m off Barbados.

Remarks. The species was reported by Van Soest & Stentoft (1988: 132) as Xestospongia cf. proxima . It is not the encrusting Neopetrosia proxima (see above). At first glance it appears close to the common shallow-water sponge Xestospongia muta in habit. However, the spicules of our new species are definitely significantly shorter and thinner than those of X. muta . Van Soest (1980: 68) compared spicule sizes of shallow-water populations of X. muta in several Greater Caribbean localities: Curaçao specimens measured 360–345 x 11–16 µm, Puerto Rico specimens 303–412 x 14–23 µm, and Bahamas specimens 290–430 x 3.5–12 µm. The spicules of our deep-water specimens do not exceed 200 µm in length. Although the shallow-water specimens of X. muta have predominantly oxea spicules, there is always a good proportion of strongyle forms. In the present deep-water material there are no strongyles, all spicules are sharply pointed oxeas. Finally, the skeletal structure of X. muta specimens is more loosely organized, and does not have the superimposed anistropic arrangement of spicules and meshes. No other Neopetrosia species in the Central West Atlantic have a vase-shaped habit.

The niphatid Cribrochalina vasculum (Lamarck, 1814) shares the vase-shaped habit with N. eurystomata n. sp., but it is different in color (brown) and the spicules include forms as small as 50 µm and up to 300 µm or more. The skeleton is also radically different with an emphasis on ascending spicule tracts separated by large spaces in which only loose spicules occur, with few interconnecting tracts ( Wiedenmayer 1977: 119; Zea 1987: 91). 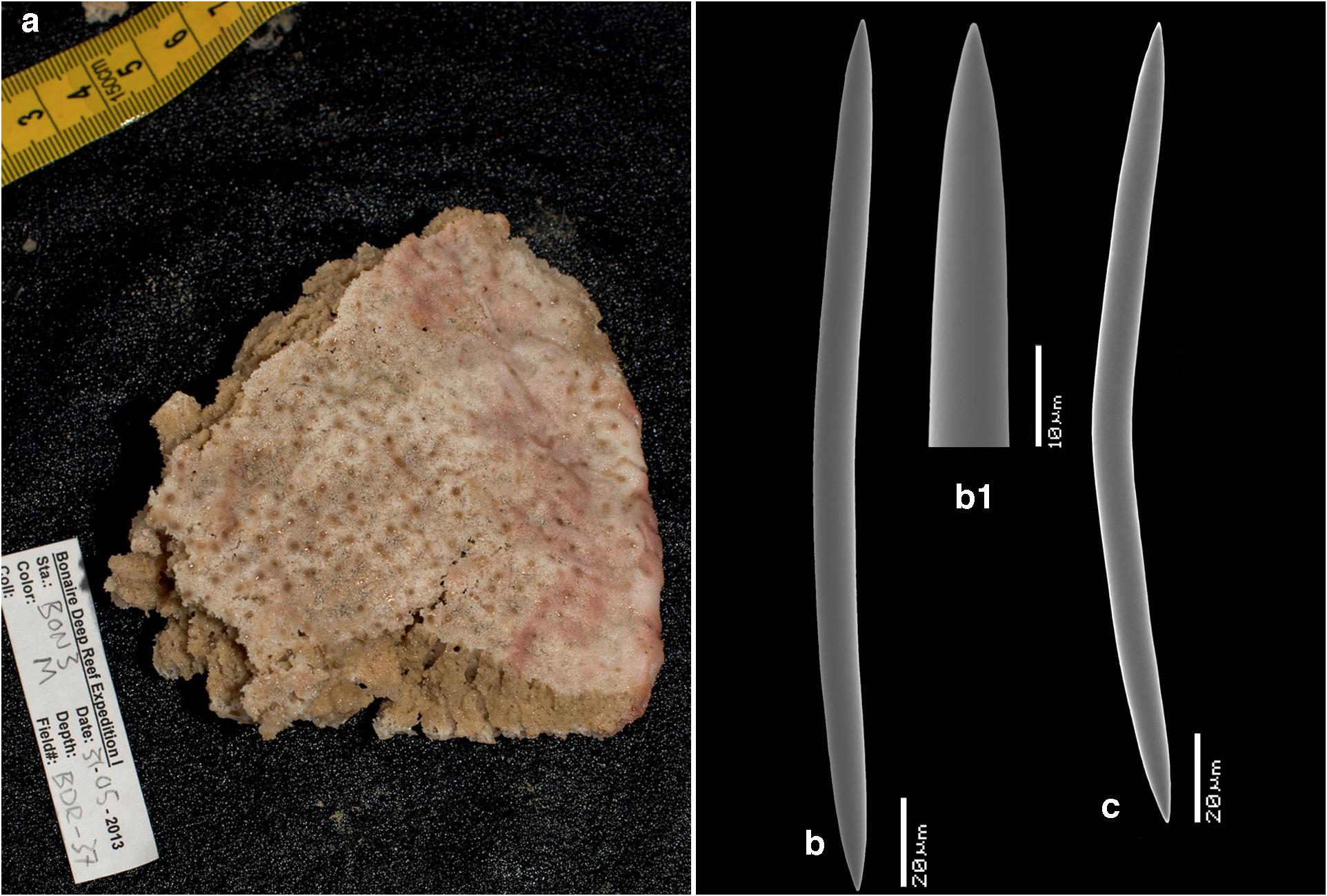