Male (semiad.). — Labium pale orange-yellow. Labrum wholly black. Mandible-bases, genae and anteclypeus bright blue. Postclypeus, frons and vertex black, postclypeus very shining, base and apex of second joint of antennae and a pair of elongate transverse marks just posterior to the antennae, on either side connecting each lateral ocellus with the margin of compound eye, blue. These head-marks are irregular in shape, rather expanded mesially, narrower and linear laterally. Remainder of head black, save for a pair of very small, transverse, blue postocular spots, restricted to the middle of the epicranial lobes and just visible in dorsal view.

Prothorax with anterior and posterior lobes black, middle lobe blue with a fine median black line. Transverse lateral suture black. Posterior lobe simple, its free margin with a very shallow concavity so as to form a minute obtuseangulate projection on either side of it.

Synthorax bronzy-black above, light orange-yellow at the sides and underneath; antehumeral stripes broad, complete, gently tapering to a point dorsally and ceasing about 0.5 mm before ante-alar triangles, which are black; at the top of either shoulder and outdistancing the stripes, lies an oval yellow spot. On the side of the thorax a black line, narrowly connected dorsally with the black of the mesepimeron, on the second lateral suture, stopping short 0.5 mm before the spiracle.

Abdomen slender. Segm. 1 bright yellow, with a thick median line of black, 2 yellow-brown, paler below, with narrow black apical ring; 3 - 6 each with an indistinct, transverse basal yellow ring, interrupted mid-dorsally (most conspicuous on 3). and narrow black apical rings. The remaining segments progressively darker, 9 10 black; 9 with a large blue dorsal patch, bluntly pointed basallv, and 10 with a mid-dorsal point of the same colour, at extreme base. Articulation between 9 and 10 likewise blue.

Female (ad). — Differs from the male only in details of coloration and in the shape of the prothorax. Posterior lobe of prothorax shaped as shown in fig. 8 View Fig , the median division of the lobe depressed. Antehumeral stripes and metepisternum blue.

Wings with 12-14/11-13 postnodals. Abdomen coloured as in male. Distal 2/3 to 1/3 of segm. 8 entirely, and a thick stripe bordering the tergal margin, bright blue; 9 and 10 and ann] appendages wholly black. Valves very long, with slightly convex ventral border, projecting beyond apex of segun. 10 for almost twice t-he length of this segment. 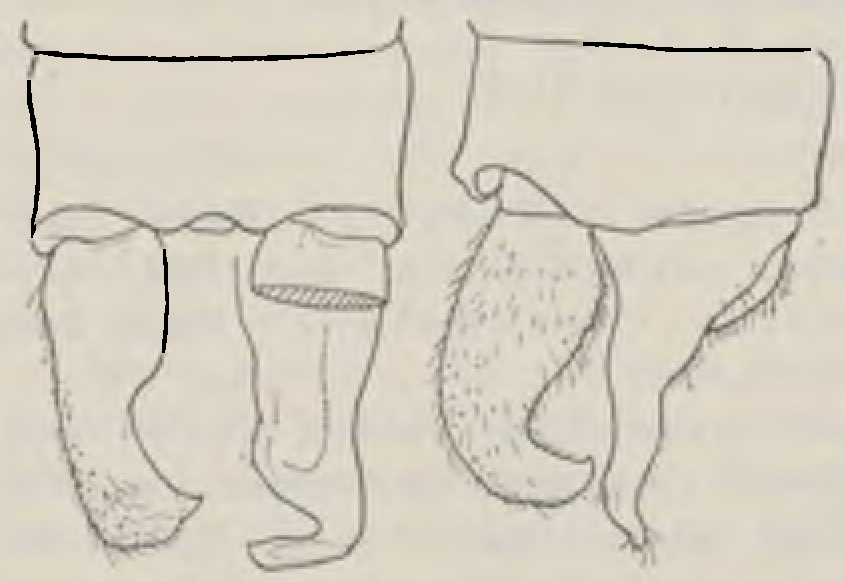