The specimens examined by me agree closely with the original description. except that the thorax of the male is not “ einfarbig sammetbraun ”, but is marked dorsally With a pair of oblique green antehumeral bands, followed by a transverse streak of the same colour, on each side in front of the ante-alar- triangles. The sides of the thorax are also marked with green but the exact shape Of the lateral bands is not easily made out because the colours have faded from decomposition. The Malaysian species of the genus Oligoaeschna obviously present a very uniform colour-pattern of the body.

The following notes may be added to Forster's brief diagnosis and Martin's description of the male.

Male - Head coloured much as described for platyura . Green markings Un dorsum of synthorax as in that species; lateral bands diffuse, indefinite, though apparently also similar in principle to those of platyura and modiglianii ; no visible pale spots on metepisternum. Legs coloured as in platyura .

Wings palely suffused with greyish-yellow (sub-ad.), or with a greyishbrown tinge all over the membrane (ad).

Pterostigma greyish-brown, shaped as in the other species, that of fore wing 2.2 mm in length. Only one row of cells between M4 - Mspl (rarely and irregularly one double cell in one of the wings). Anal angle shaped as in modiglianii ; membranula very narrow (fig. 16). Nodal index in one specimen 10.18 18.9/10.12.12 11 Abdomen. constricted on segment 3 (1.0 - 1.1 mm), slightly spindle-shaped beyond, acquiring its maximum width (2.3 mm) towards the end of segm. 4, from where it is at first parallel-sided, then diminishes very gradually in width till the end of 7; finally, 8 10 again somewhat broadened. Terminal segments depressed. Dark brown, markings obscured and discoloured. Segment 10 reddish-brown, smooth and shining, without any indication of transverse striae or warts (cf. MARTIN, loc. cit. fig. 129).

Female. — I have not seen this sex of amata , and although MARTIN described it in his monograph, there are neither identified nor unnamed females in the Paris Museum corresponding with this description. 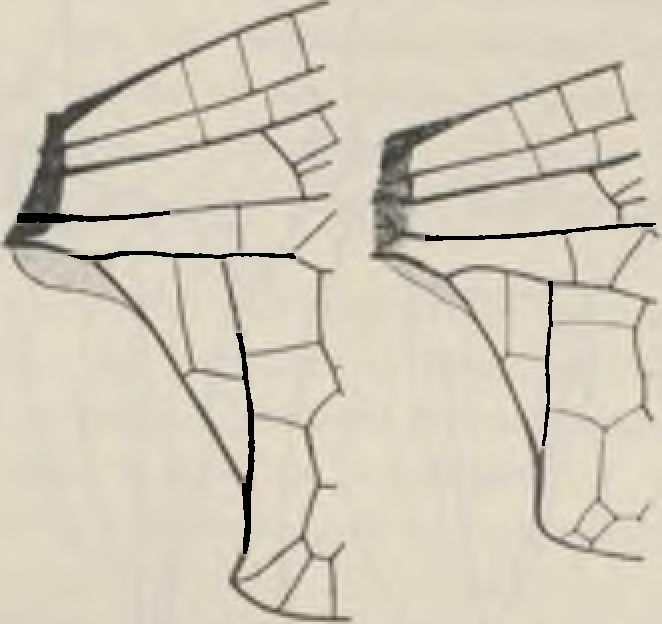