Variations. Examined specimens measured between 3.28 and 4.19 mm in disc diameter (dd). Small morphological variations were observed. Only one specimen of 3.61 mm dd presented the primary plates well developed ( Fig. 6View FIGURE 6 D), these were the only plates present at the central region of the disc. The dorsal arm plate can vary from triangular to pentagonal. Usually, dorsal arm plates of triangular shape are observed on the first arm segments.

Color. Specimens preserved in alcohol are whitish. There is no information regarding color of living specimens.

Remarks. Nielsen (1932) described Amphipholizona perplexa  on the basis of two specimens, with a disc diameter between 3 and 3.5 mm ( Fig. 6View FIGURE 6 A, B, C), from Perlas Archipelago (Pacific Panama) at 45.72 m depth. This species has been rarely cited since its original description, being considered extremely rare. Amphipholizona perplexa  is currently known from only 10 specimens collected along the coast of California and Panama Bay, Pacific Ocean.

Amphipholizona perplexa  (junior synonymy Amphigyptis perplexa  ) was originally placed in the family Hemieuryalidae  (see comments for the genus), on the basis of the shape of the arm plates, of the oral structure, and of the shape of the bursal slits. However, this classification is incorrect. Amphipholizona perplexa  differs from Hemieuryalidae  in several characters, among which are: the presence of a circular disc, infradental papillae, six arm spines, tentacle scale lacking, and arm spine articulation formed by two parallel, slightly curved, ridges of equal length, and abradial and adradial genital plate long and similar in size. All these characters concur with the pattern seen in Amphiuridae  , and fit perfectly with the new diagnosis provided for the genus Amphipholizona  . Consequently, we propose the new combination Amphipholizona perplexa  and recommend transferring this genus to the Amphiuridae  .

According to Thomas (1966), A. perplexa  is similar to Amphipholis pentacantha H.L. Clark, 1915  . However, according to our observations, this similarity is restricted to the absence of a tentacle scale beyond the fourth arm segment in A. pentacantha  (there are two tentacle scales on the first segment and one on the second and third arm segments). In all remaining characters (e.g. disc covering, radial shields, dorsal and ventral arm plates, oral and adoral shields) these species are very different (see H.L. Clark 1915: 241, 242, pl. VI, figs. 1–2). Amphipholizona perplexa  is very closely related to A. delicata  . However, A. perplexa  differs from this latter species for having a short and slightly dorso-ventrally flattened arm, no tentacle scales along the arm and by the shape and ornamentation of the dorsal and ventral arm plates ( Table 1). Furthermore, the two species have a well-defined geographical distribution, A. perplexa  occurs in the Pacific Ocean, while A. delicata  is only known from the Atlantic Ocean. We thus consider the differences sufficient for maintaining A. delicata  and A. perplexa  as distinct species.

Morphological characters Species The genus Amphipholizona  is clearly an Amphiuridae  in several morphological aspects. However, this genus shares some characters with other, apparently non-related genera. One example is the morphology of the lateral arm plate, which has spine articulations, particularly the knobs on the inner side, which are typically amphiurid, while the general outline of the plate and especially the outer surface ornamentation are similar to the pattern found in some species of Ophiolepis  (see Thuy & Stöhr 2011: 36, Fig. 21), Ophiozonella Matsumoto, 1915  , and Ophiozonoida H.L. Clark, 1915  ( Ophiolepididae  ) (Ben Thuy and Daniela Y. Gaurisas personal communication).

Amphipholizona  seems to be more closely related to Amphipholis  than any other genus of Amphiuridae  . Both share a very similar pattern in the shape and arrangement of the oral frame and have one or no tentacle scales. It should be stressed that the great majority of species of Amphipholis  have two tentacle scales. The arrangement of oral papillae is presently considered important in separating genera in Amphiuridae ( Martynov 2010)  , and the presence of oral papillae appear to represent a conservative pattern within the Amphiuridae ( Hendler 1988)  . They may thus be indicative of deep phylogenetic affinities. Notwithstanding, the absence of tentacle scales is recorded in species across the Ophiuroidea, which suggests that this absence may be homoplastic. Only a thorough phylogenetic study may confirm possible historical relationships between these genera and will be able to clarify the affinities of this genus with some genera of Ophiolepididae  .

With the present study we have clarified the systematic position of the genus Amphipholizona  , and have contributed to the systematics, at least in part, of the families Ophiolepididae  and Hemieuryalidae  . Further efforts are needed in order to characterize these less-known taxa and to reconstruct phylogenetic relationships within Ophiuroidea. 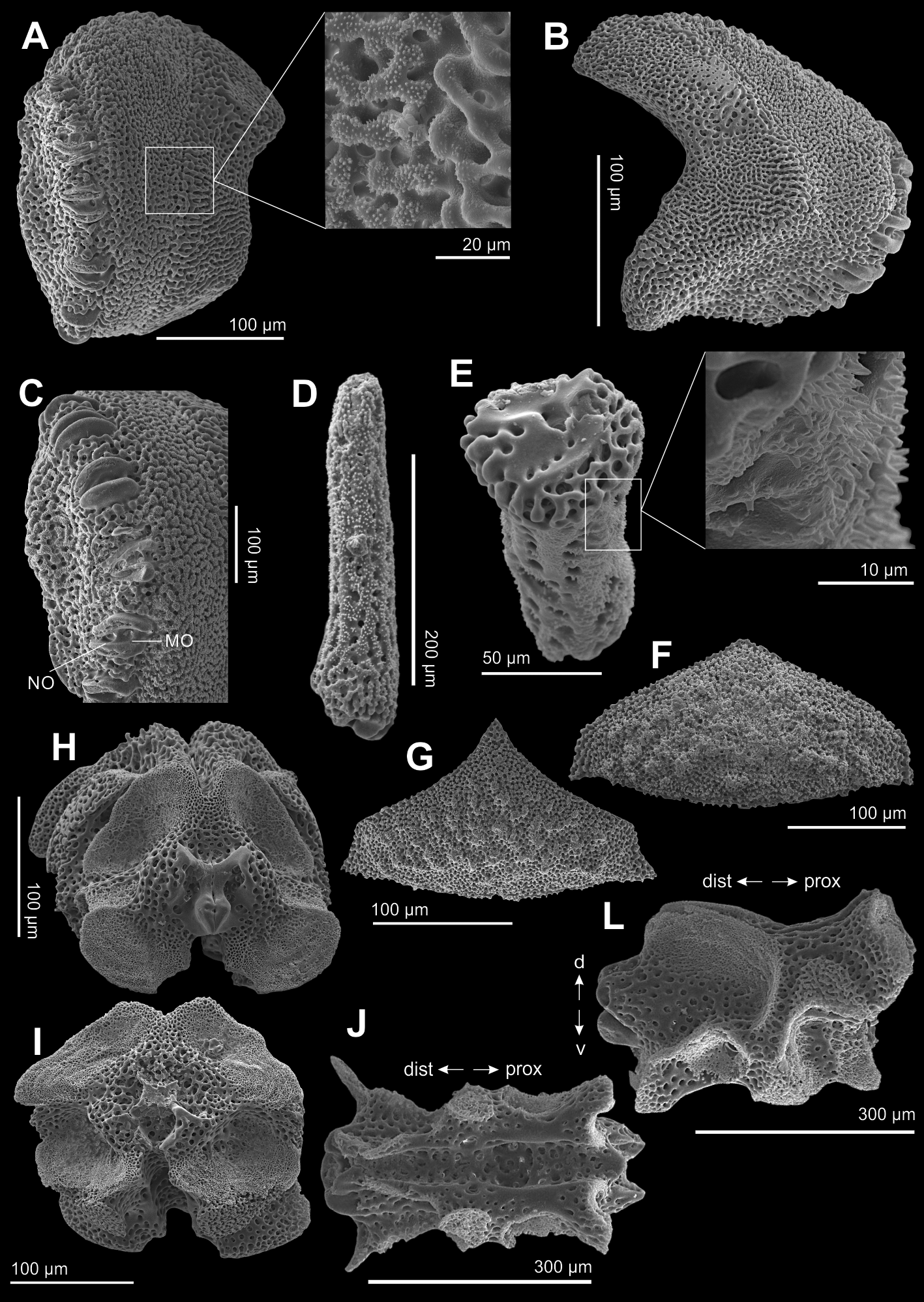 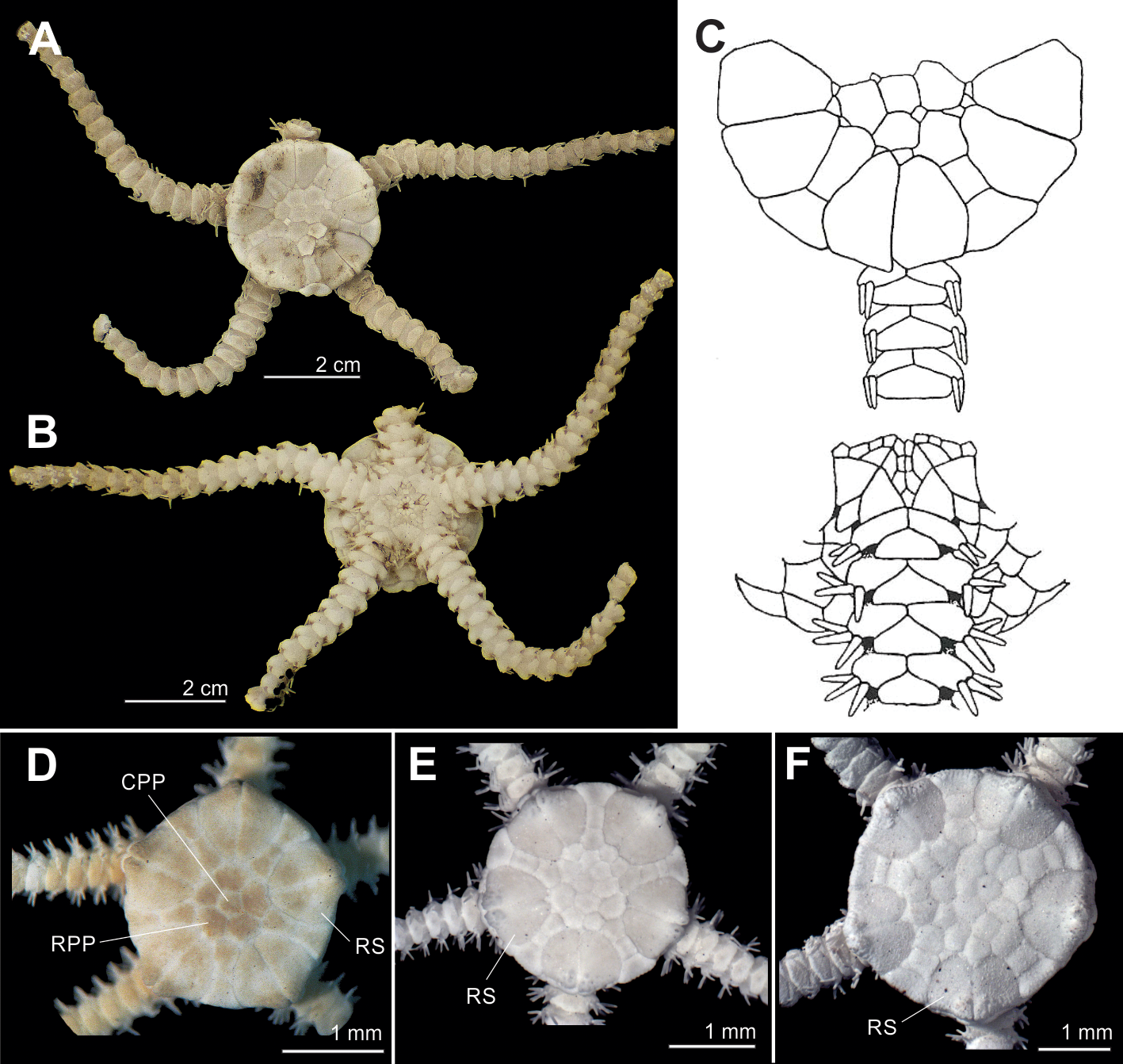