Material. CM 24274, r tarsometatarsus   with damage to the hypotarsus and repair to the shaft ( Fig. 1Q View FIGURE 1 ). Referred to Perisoreus canadensis   by Brodkorb & Mourer-Chauviré (1984).

Description. These five passerine bones are recognizable as New World jays, family Corvidae   , based on size and morphological agreement. They represent either a single species or multiple species of similar size. They cannot be assigned to any of several fossil species of North American jays of late Blancan and Irvingtonian ages ( Protocitta dixi Brodkorb 1957   , Protocitta ajax Brodkorb 1972   , Henocitta brodkorbi Holman 1959   ), which are considerably larger in body size. One of the fossil tarsometatarsi (CM 24274) has a particularly narrow shaft distally, and the tibiotarsus also has a narrow distal shaft in relationship to condyle breadth. These traits are not diagnostic to species according to the morphometric analysis described below.

Morphometric Analysis. I used a morphometric approach to compare the fossils with modern species of jays from continental North America north of Mexico ( Canada Jay P. canadensis, Blue Jay   Cyanocitta cristata   , three species of scrub jays, Aphelocoma coerulescens   , woodhouseii   , and californica   , and the larger Steller’s Jay Cyanocitta stelleri   ). Bone lengths could only be taken from the fossil carpometacarpus and the two tarsometatarsi. Boxplots for these measurements illustrate differences in intermembral proportions among the taxa, with Aphelocoma   having a long tarsometatarsus relative to carpometacarpus, and Perisoreus   and even more so Cyanocitta cristata   having a short tarsometatarsus relative to carpometacarpus ( Fig. 2 View FIGURE 2 ). For the fossils, even with the small sample size, it can be seen that if only one species of jay is present, its body proportions are not consistent with assignment to Aphelocoma   . The fossil tarsometatarsi are also distinctly smaller than in C. stelleri   .

Brodkorb & Mourer-Chauviré (1984) referred the tarsometatarsus CM 24274 to P. canadensis   based on its slender shaft. To evaluate the intramembral proportions of the two fossil tarsometatarsi, I measured tarsometatarsus length and four width measurements covering proximal and distal articular and shaft widths (Appendix 1). I performed a principal components analysis using four variables: 1) length from intercotylar area to the trochlea of the third metatarsal, 2) proximal width across articular facets, 3) proximal shaft width at level of proximal vascular foramina, 4) distal shaft width at level of distal vascular foramen ( Fig. 4 View FIGURE 4 ). I also ran this analysis with five variables (distal width across trochleae included), with very similar results (not shown). In the four-variable analysis, for the first principal component, the variables’ loadings had the same sign and a moderate range of values (variable 1 = -0.52, variable 2 = -0.55, variable 3 = -0.49, variable 4 = -0.44). This component, weighted most heavily on length and the proximal widths, reflects size and also some shape variance, as clearly shown by the reversal of the positions of C. cristata   and P. canadensis   relative to their tarsometatarsus lengths (compare Figs. 2b View FIGURE 2 and 4 View FIGURE 4 ). The second principal component contrasted tarsometatarsus distal shaft width (component loading -0.80) with proximal shaft width (loading +0.48) and total length (loading +0.33). This component tended to distinguish A. californica   and A. woodhouseii   from the other taxa but otherwise was ineffective at separating the species. The two Cumberland Bone Cave fossils are centrally placed in the principal components biplot ( Fig. 4 View FIGURE 4 ). CM 24274 falls just outside the probability ellipse for P. canadensis   , which supports Brodkorb & Mourer-Chauviré’s opinion of the bone; however, it also falls within the probability ellipse for C. cristata   and just outside the ellipses of the three species of Aphelo- coma. USNM PAL 641989 falls near the center of the plot, within the ellipses for C. cristata   and A. coerulescens   . Considering that these are merely 68% probability ellipses, representing one standard deviation, I conclude that the tarsometatarsus data are indecisive with regard to the genus or species of jay(s) represented.

Remarks. The fossil jays received extra scrutiny because Brodkorb & Mourer-Chauviré cited their identification of P. canadensis   as evidence that the Cumberland Bone Cave assemblage accumulated during a cold climate phase. Although the osteometric analysis eliminated C. stelleri   on size and provisionally eliminated Aphelocoma   on body proportions (assuming only one species is represented by the fossils), it was otherwise indecisive as to the genus and species represented. Perisoreus canadensis   has also been reported as a fossil in another southerly location, Cheek Bend Cave in Tennessee ( Parmalee & Klippel 1982). The bird and mammal assemblage from Cheek Bend Cave includes a number of boreal species and was interpreted as dating to the Last Glacial Maximum. In the case of Cumberland Bone Cave, Perisoreus   , if present, would be the only purely boreal element in the avian assemblage (see Discussion). 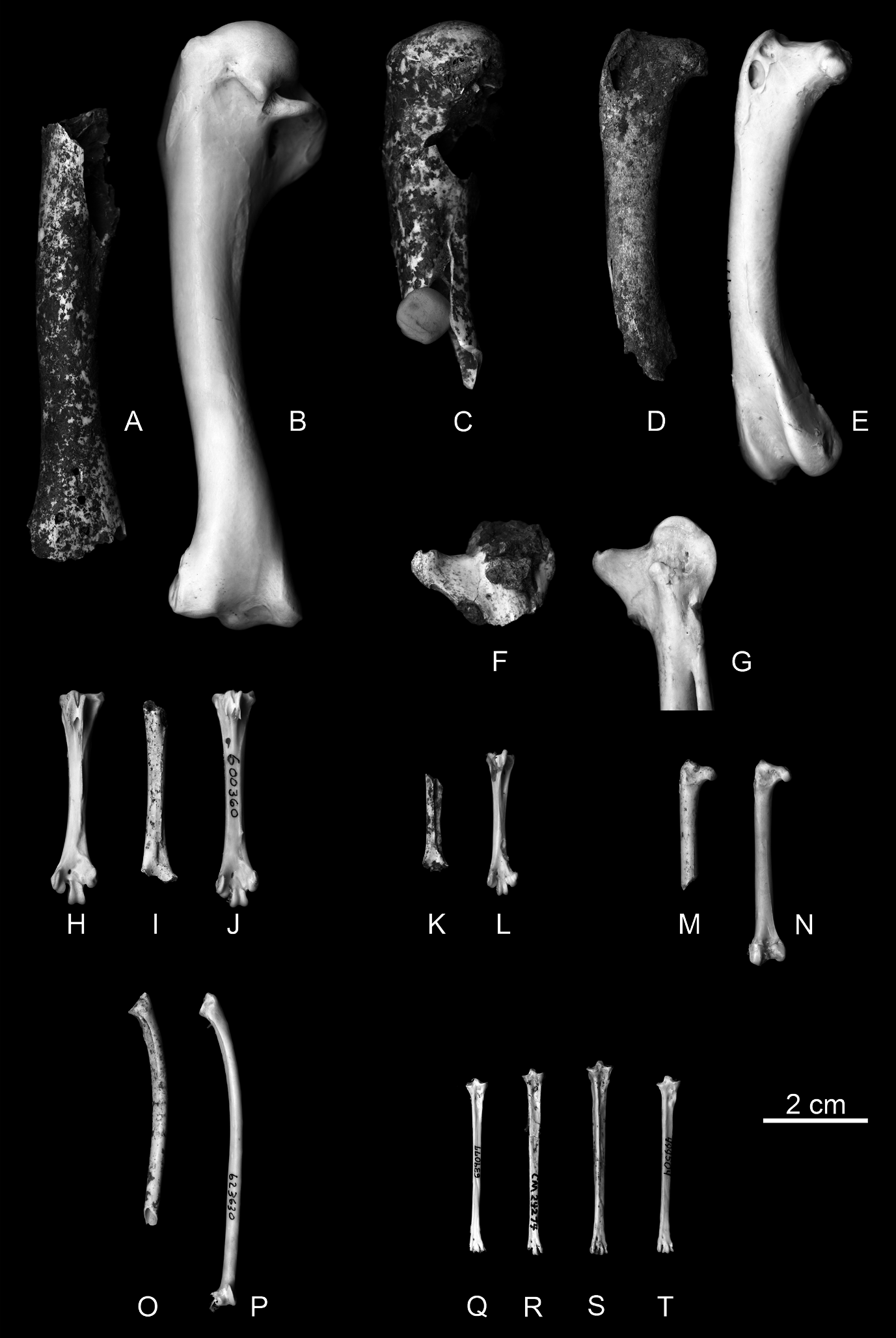 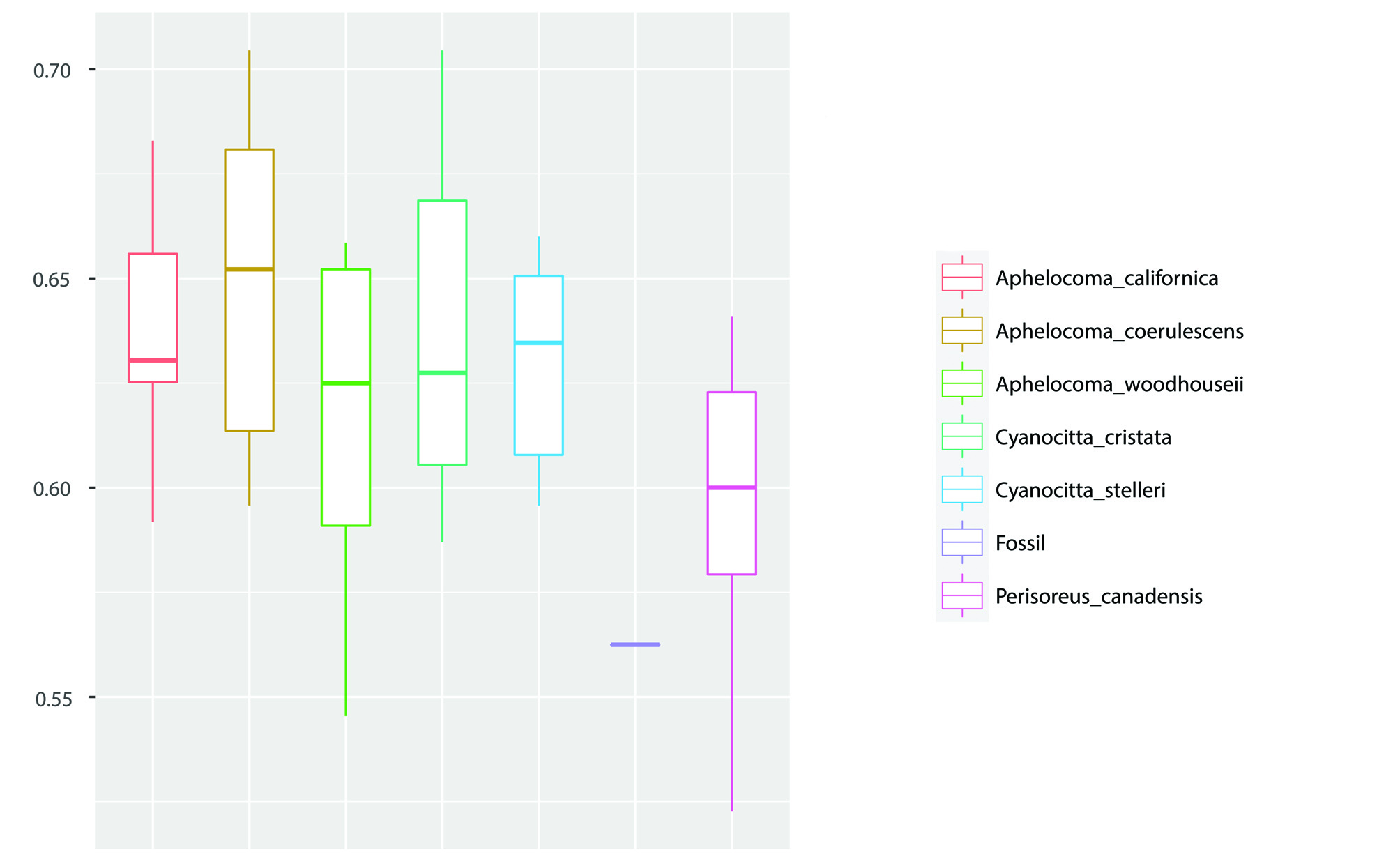