Etymology. Named noveloi after Dr. Rodolfo Novelo Gutiérrez, a great friend, teacher, and devoted odonatologist, whose special interest in the immature stages led him to make great contributions to the field of odonatology. His kindness and willingness to help have motivated several students and researchers to work with odonates in Latin America.

Wings. Hyaline with dark brown venation and pt ( Figs. 7a–b View FIGURE ), which overlies one cell and has a ratio between distal and proximal length of about 1:1. FW with Px 12 in left and 11 in right; HW with Px 10 in.

Genital ligula. With four basal setae on each side, apical segment clubbed with lateral margins expanded in lateral view and directed backwards ending in a blunt tip, with a small inner fold ( Figs. 5c–d View FIGURE ).

Wings. Hyaline with dark brown venation and pt ( Fig. 7b View FIGURE ), which overlies one cell and has a ratio between distal and proximal length of about 1:1. 12 Px in FW, and10 Px in HW.

Abdomen. Same pattern as males except green instead of blue and brown instead of black, also S8–9 brown and anterior margin of S9 and S10 blue ( Fig. 7b View FIGURE ). Cercus brown, semitriangular in lateral view, half as long as S10, triangular in dorsal view, almost in contact at base, gonapophyses finely serrulated, styli brown, as long as cerci ( Fig. 6b View FIGURE ).

Variation in male paratypes. number of spurs on metafemur: 6–8; on metatibia 7–10. Px 10–13 in FW, Px 9–12 in HW. Light coloration goes from light green to light blue ( Figs. 5a–b View FIGURE ), some specimens are mostly green. The light colored metepisternal stripe can be divided in two small stripes one close to the coxae and the other close to the alar suture ( Fig. 7a View FIGURE ). Amount of pruinescense on inner surface of cercus varies from totally covered to none ( Figs. 5f, h View FIGURE ).

Variation in female paratypes. Light coloration goes from light green and blue to brown, across some yellowish tones.

Differential diagnosis. Males of this species can be placed in group M- 4 in Garrison (2009), because distance between bases of cerci is larger than 0.50 of the basal width of each cercus, wings are hyaline, cerci do not have a complete elongated seam and in lateral view are three times the length of paraprocts ( Figs. 5e–h View FIGURE ). Within this group T. noveloi shares the absence of red coloration on abdomen only with T. demarara (Williamson, 1917) ; these two similar species can be differentiated because the cercus in T. noveloi has a ventral tooth on its inner side, directed inwards, which can be easily seen in dorsal view ( Figs. 5f–h View FIGURE ), which is not present in T. demarara , whose cercus has instead an apical recurved tooth which is not present in T. noveloi . Another difference is the presence of a tubercle on hind margin of mesostigmal plate in both sexes in T. demarara which is lacking in T. noveloi . The other species in Garrison’s M4 group can also be differentiated from T. noveloi by: paraprocts in lateral view almost as long as cerci in T. racenisi Bick & Bick, 1995 , whereas they are about a third of the length of cerci in T. noveloi ; ventral side of cerci convex in lateral view in T. rubricauda , while in T. noveloi they are slightly concave; cerci with a ventrobasal process in T. corbeti , which is not present in T. noveloi . Based on the morphology of its genital ligula, T. corbeti belongs in group Ma-5 of Garrison (2009), characterized by distal segment clubbed with lateral margin expanded in lateral view. Within this group the most similar species are T. williamsoni and T. rubricauda due to the coloration blue in thorax and black in the rear of head, and the rounded shape of the lateral margin of prothoracic posterior lobe. Telebasis noveloi can be differentiated from both because the lateroapical margins of the ligula are expanded in lateral view and directed backwards ending in a blunt tip.

Females lack mesepisternal pits lateral to mid-dorsal carina, ovipositor does not extend beyond S10 ( Fig. 6b View FIGURE ) and dorsum of S10 lacks a supplementary transverse carina, they lack prothoracic horns, and have thorax coloration mostly light brown with a linear mesepisternal stripe ( Figs. 6a, c–d View FIGURE , 7b View FIGURE ), which places them in Garrison’s (2009) group F5. Within this group, T. noveloi shares the presence of a pair of medio-lateral tubercles on the posterior lobe of prothorax ( Figs. 6c–d View FIGURE ) with T. brevis Bick & Bick, 1995 , T. corbeti , and T. selaopyge De Marmels, 1989 , but it can be differentiated from all of them by the ridge-like nature of these tubercles ( Figs. 6c–d View FIGURE ). 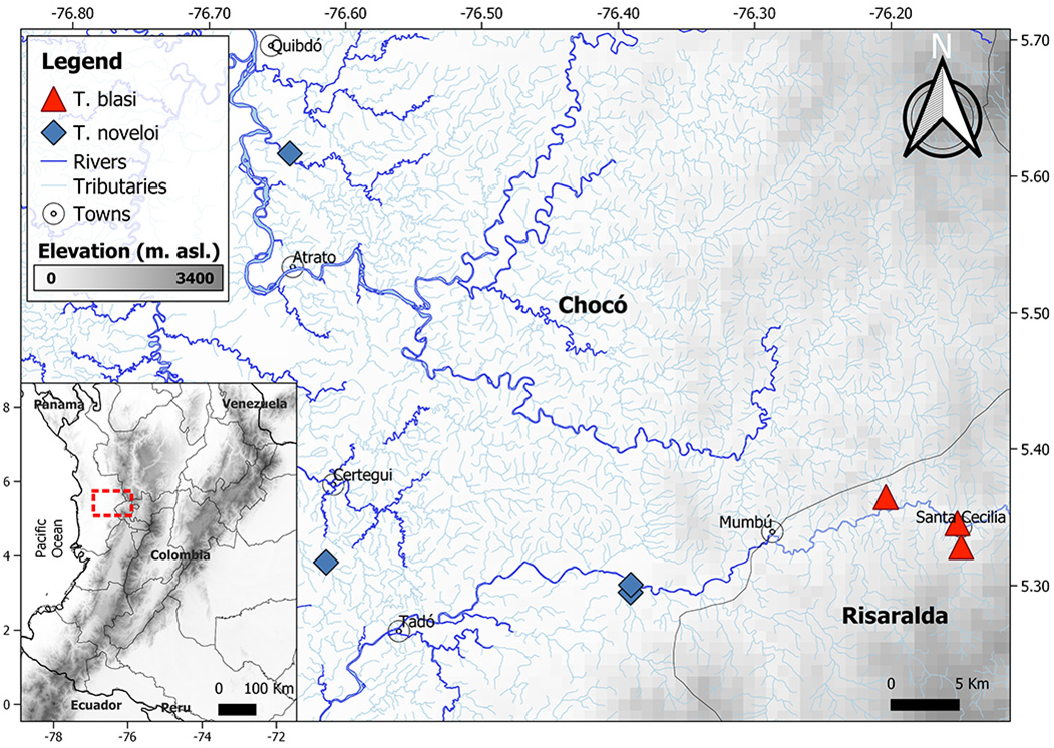 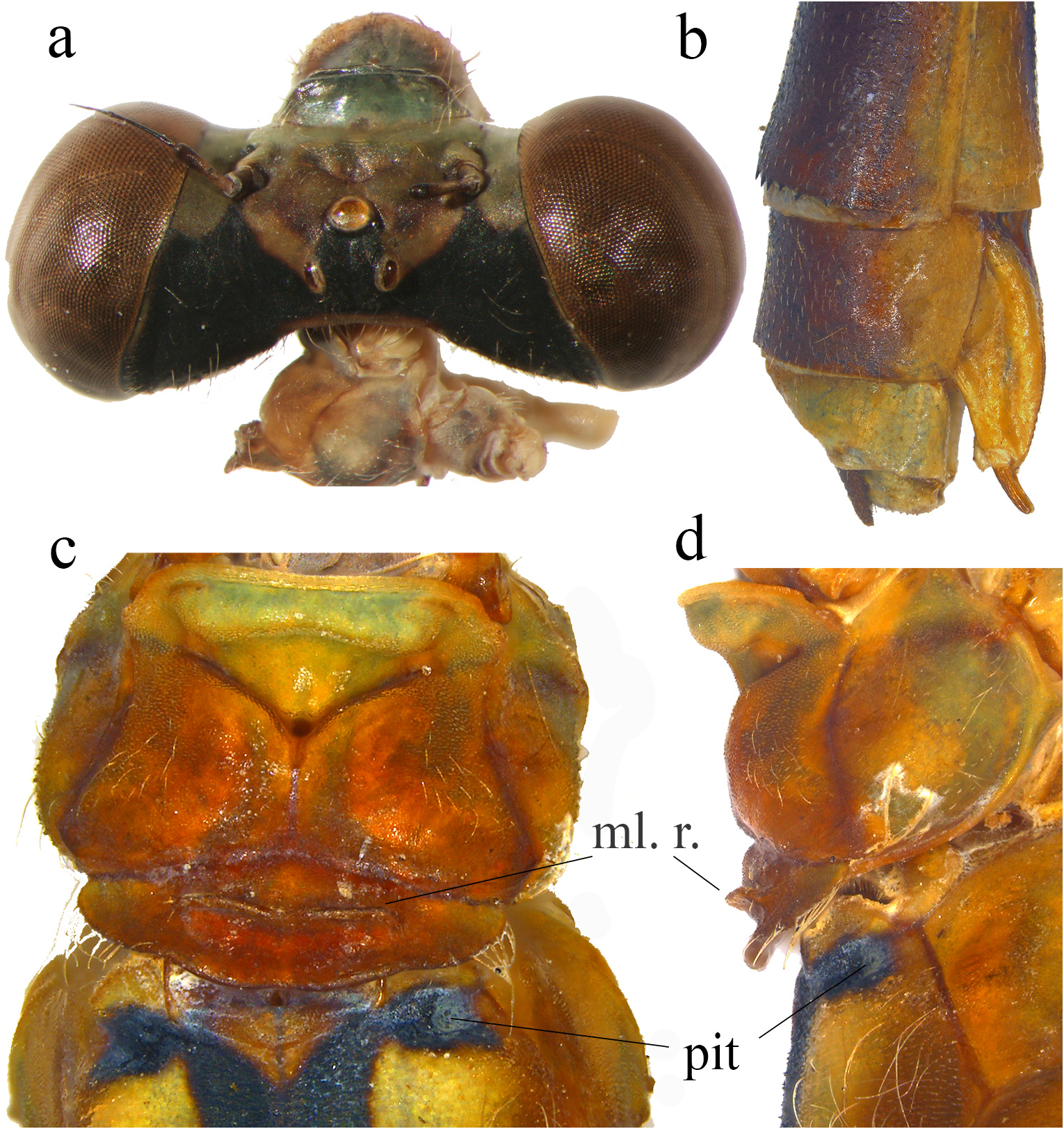