Diagnosis. Cobitis fahireae  is distinguished from C. elongatoides  , C. pontica  and C. tanaitica  by having a small or no black spot at the caudal-fin base (vs. roundish or ovoid, large, about size of pupil or eye) or if larger, then having one black spot at the upper and one black spot at the lower caudal-fin base (vs. always one spot only). It is distinguished from other Cobitis  species in the eastern Aegean Sea basin by having one lamina circularis in the male (vs. two in C. dorademiri  , C. phrygica  and C. strumicae  ).

Distribution. Cobitis fahireae  occurs in the eastern Aegean Sea basin where it is found from the upper Dalaman River drainage (around Gölhisar) in the south to the Madra River drainage in the north.

Remarks. Erk'akan et al. (1998) described C. fahireae  from "Küçük Menderes, Selçuk-Aydin" (= Küçük Menderes River at Selçuk in the Aydın province) and they described another species, C. vardarensis kurui  , from the (Küçük) "Menderes River, Selçuk-Aydin, Saplik Bridge". Both species have been collected at the same day and probably from the same spot or close by. Despite several visits, we failed to find Cobitis  in the remains of the Küçük Menderes River drainage. This might be related to the massive environmental changes in the area in the past 34 years. We examined one paratype of C. fahireae  (from the Gediz River drainage) and the holotype and four paratypes of C. v. kurui  from the type locality. Three paratypes of C. v. kurui  are identified as C. afifeae  (described below).

Erk'akan et al. (1998) described Cobitis v. kurui  as a subspecies of C. vardarensis  and distinguished both subspecies by the brown, very small or absent spot at the upper caudal-fin base in C. v. kurui  (vs. large and black in C. v. vardarensis  ) and having more blotches along Z4 (no details given). Indeed, based on the description by Erk'akan et al. (1998) and the types examined, both subspecies can be immediately distinguished by the very small or absent upper caudal-fin base spot in C. v. kurui  (vs. large in C. v. vardarensis  ) and the pigmentation in Z3 formed by one line or a narrow band of brown spots (vs. many small, brown spots the in Z3 giving it a "sandy" pattern).

Cobitis damlae  was described by Erk'akan & Özdemir (2014) based on one female individual from the stream Bayındır in the upper Dalaman River drainage. Erk'akan & Özdemir (2014) claim that C. damlae  is a subterranean species but it has been collected from surface waters and not from an underground habitat. Erk'akan & Özdemir (2014) speculate that the sole individual was washed out from underground waters nearby. However, they provide no evidence for this speculation. Baran Yoğurtçuoğlu (Ankara) & JF visited the type locality of C. damlae  in 2017 and found no spring or any subterranean waters adjacent to the type locality. The stream Bayındır flows down from a reservoir and we found no tributaries, which might originate from an underground source. Erk'akan & Özdemir (2014) mentioned the caves Keloğlan and Aslanini in the upper Dalaman River drainage about 30 km from the type locality of C. damlae  , but no troglomorphic fish have ever been reported from these caves. It remains unclear how these caves or other subterranean habitats might be connected to the stream Bayındır.

The holotype and single known individual of Cobitis damlae  ( Fig. 13View FIGURE 13) has no pigmentation and its eye is not reduced in size. Surprisingly, Erk'akan & Özdemir (2014) distinguished C. damlae  by having vestigial eyes, a character state not seen from the picture. In subterranean fishes, the eye is usually reduced in size already in the very early phase of adaptation to an underground environment, while the pigmentation pattern is reduced later on, resulting in many subterranean fish with very small eyes but still having a colour patter ( Proudlove 2003). Furthermore, many subterranean fish with eyes become grey or brown, if exposed to light for some days (own observation). The situation is the opposite in C. damlae  . Here the pigmentation is absent, but the eye is fully developed. On the picture ( Fig. 13View FIGURE 13), the eye-background is orange, suggesting, that the animal is albinotic. While it is impossible to exclude that the holotype of C. damlae  originates from an underground habitat, there are strong indications that it is just an albinotic individual of a surface population.

Our own molecular data ( Fig. 1View FIGURE 1) and Perdices et al. (2018) place Cobitis fahireae  in the C. taenia  species group ( C. avicennae  , C. elongatoides  , C. emrei  , C. fahireae  , C. faridpaki  , C. pontica  , C. puncticulata  , C. satunini  , C. saniae  , C. splendens  , C. tanaitica  , C. taurica  and C. vardarensis  ). Based on DNA barcoding, C. fahireae  is well separated from all other Cobitis  included in this study and it is distinguished from its closest relative, C. tanaitica  , by a minimum K2P distance of 4.5%, also supported as single PTP entity. It is further distinguished from C. elongatoides  and C. pontica  by having one line or a narrow band of brown spots in Z3 (vs. many small, brown spots the in Z3 giving it a "sandy" pattern). See below for details to distinguish C. fahireae  from other species in the C. taenia  species group in Anatolia ( C. puncticulata  , C. splendens  , C. taenia  , C. satunini  ) and from other Cobitis  species found in the eastern Aegean Sea basin. FIGURE 2. Site scale records of Cobitis species in the Middle East based on materials examined for this study and additional records listed in Table 10. 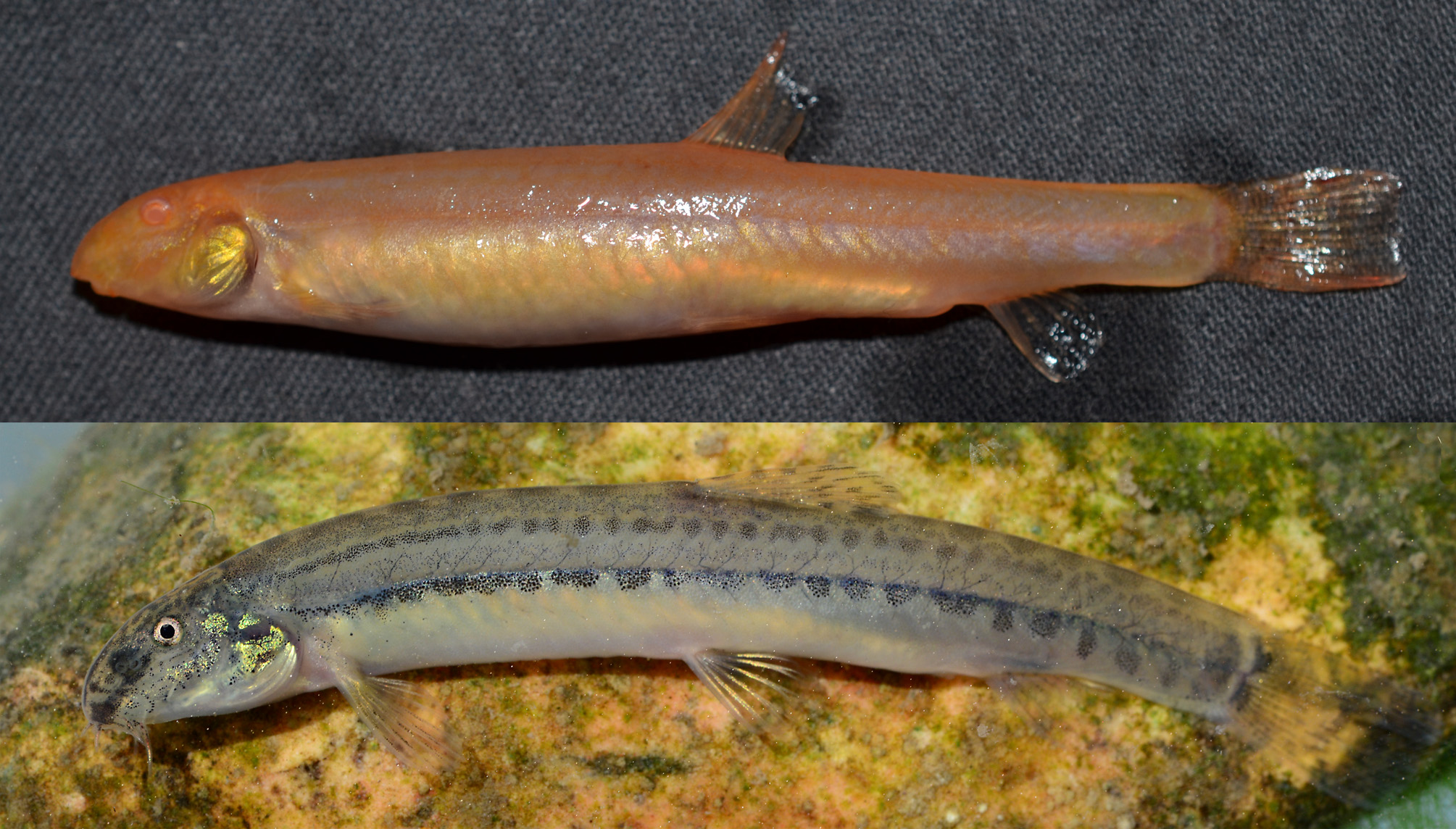