Diagnosis. Body of medium/large size (15–35 mm in length). Branchiae comma-shaped, with anterior lobe and posterior ventral lobes thinner than dorsal ones, directly emerging from branchial stem and with well-developed thin terminal filament. TC1 notopodia and notochaetae longer than following thoracic ones. Thoracic neurochaetae with rostrum / capitium length about 4/1, and capitium with a first row of 2–3 very large teeth followed by three rows of also large, but smaller teeth.

Abdomen. About 40% of body length, with 29 pairs of neuropodia as erect pinnules, with around 30 uncini per torus having three teeth above main fang surmounted by an upper crest of several minute teeth ( Fig. 18DView FIGURE 18).

Other body features. One nephridial papilla behind each TC1 notopodium and nephridial openings in TC4 and TC5 notopodia. Pygidium blunt, funnel-like depression.

Variability. Body between 15 and 35 mm in length.

Etymology. The species is named after the French zoologist Pierre Fauvel (1866–1958) for his many contributions to the study of the Polychaeta  across world oceans, especially in Europe and Africa.

Terebellides fauveli  sp. nov. has shorter TC1 notopodia and notochaetae than T. kobei  , lacks a conspicuous triangular dorsal projection in TC3 notopodia (present in T. kobei  ), has a white lateral colouration in anterior chaetigers (absent in T. kobei  ) and has a different capitium denticulation, being all teeth small and of similar size in T. kobei  , as illustrated by Hessle (1917: textfig. 32, p. 140).

Terebellides californica  was described from shelf and slope depths in the Pacific Ocean (Oregon to Western Mexico) and is characterized by the author only by the “ very well developed first chaetiger with greatly prolonged fine notosetae ” ( Williams, 1984: p. 128), which is clearly longer than the one in T. fauveli  sp. nov. and lacks any special development in TC3 and body colour pattern. This species was later redescribed by Hilbig (2000) as having a “ trilobed structure of the peristomium ” as potential new diagnostic character, which is not present in T. fauveli  sp. nov. However, in our opinion, the relevance of this character should be considered with caution as its presence in T. californica  has not been sufficiently assessed.

Terebellides mediterranea  most closely resembles T. fauveli  sp. nov. in branchial shape. However, T. fauveli  sp. nov. bears larger branchiae that reach TC6 (instead of TC3−4) and has posterior branchial lobes with terminal filament. Moreover, both species differ in number and size of the denticulation of thoracic uncini, with 3−4 mediumsized teeth above main fang and surmounted by a row of 6−7 slightly shorter tooth in T. mediterranea  (see Parapar et al., 2013: Fig. 7BView FIGURE 7).

Terebellides anguicomus  and T. lanai Solís-Weiss et al., 1991  resemble T. fauveli  sp. nov. in the shape (commalike) and size of the branchiae, also reaching TC6. However, T. lanai  bears branchial lobes fused for most of their length, and T. anguicomus  has a large transverse dorsal hump on TC5, 17 thoracic chaetigers (instead of 18) and a shorter TC1.

While some of the French species recently described by Lavesque et al. (2019), such as T. lilasae Lavesque, Hutchings, Daffe, Nygren & Londoño-Mesa, 2019  , have similar general branchial shape as in T. fauveli  sp. nov., the capitium denticulation of the thoracic uncini is very different; in fact, the shape of the thoracic uncini in T. fauveli  sp. nov. has not been recorded so far in any other species of the genus. 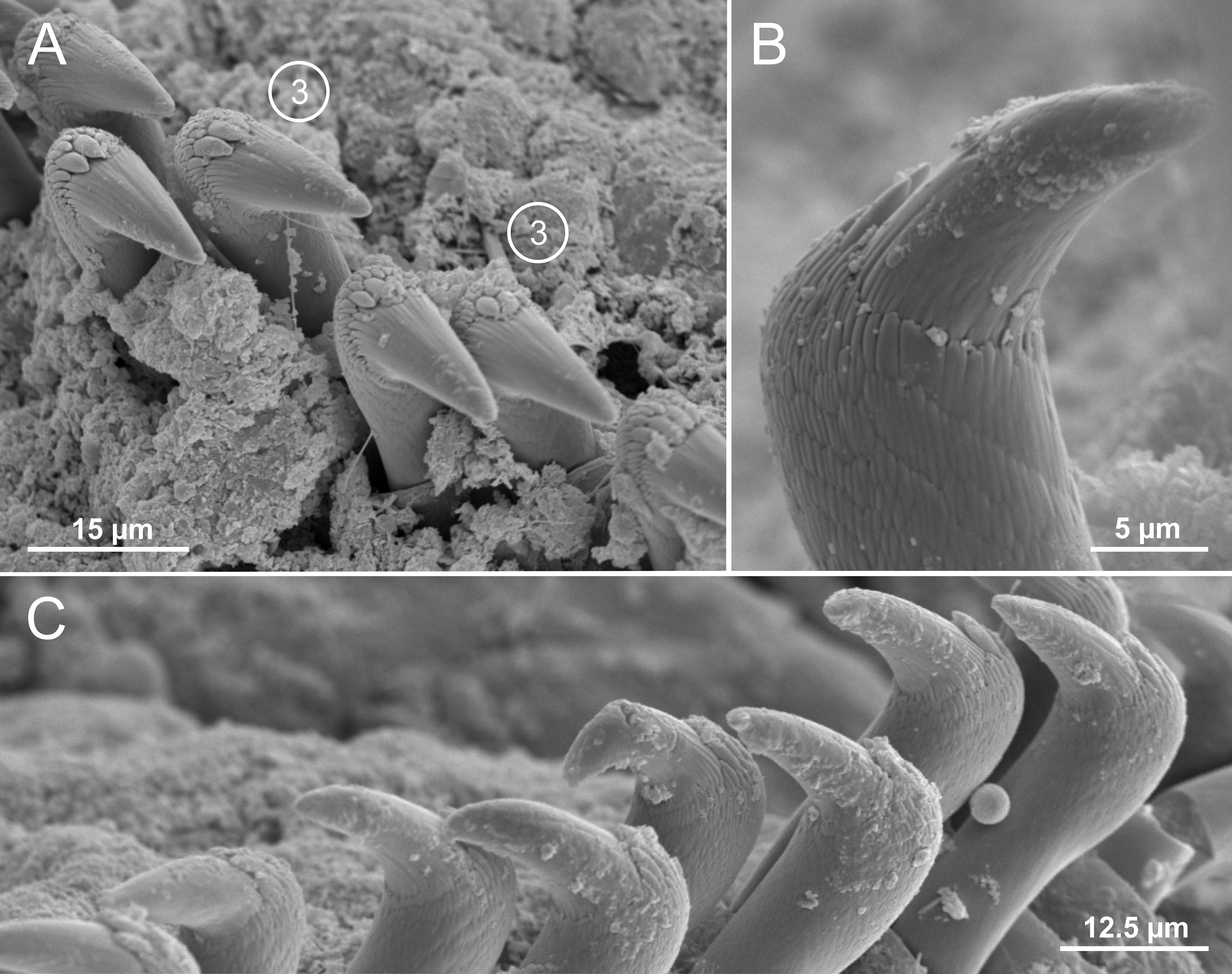 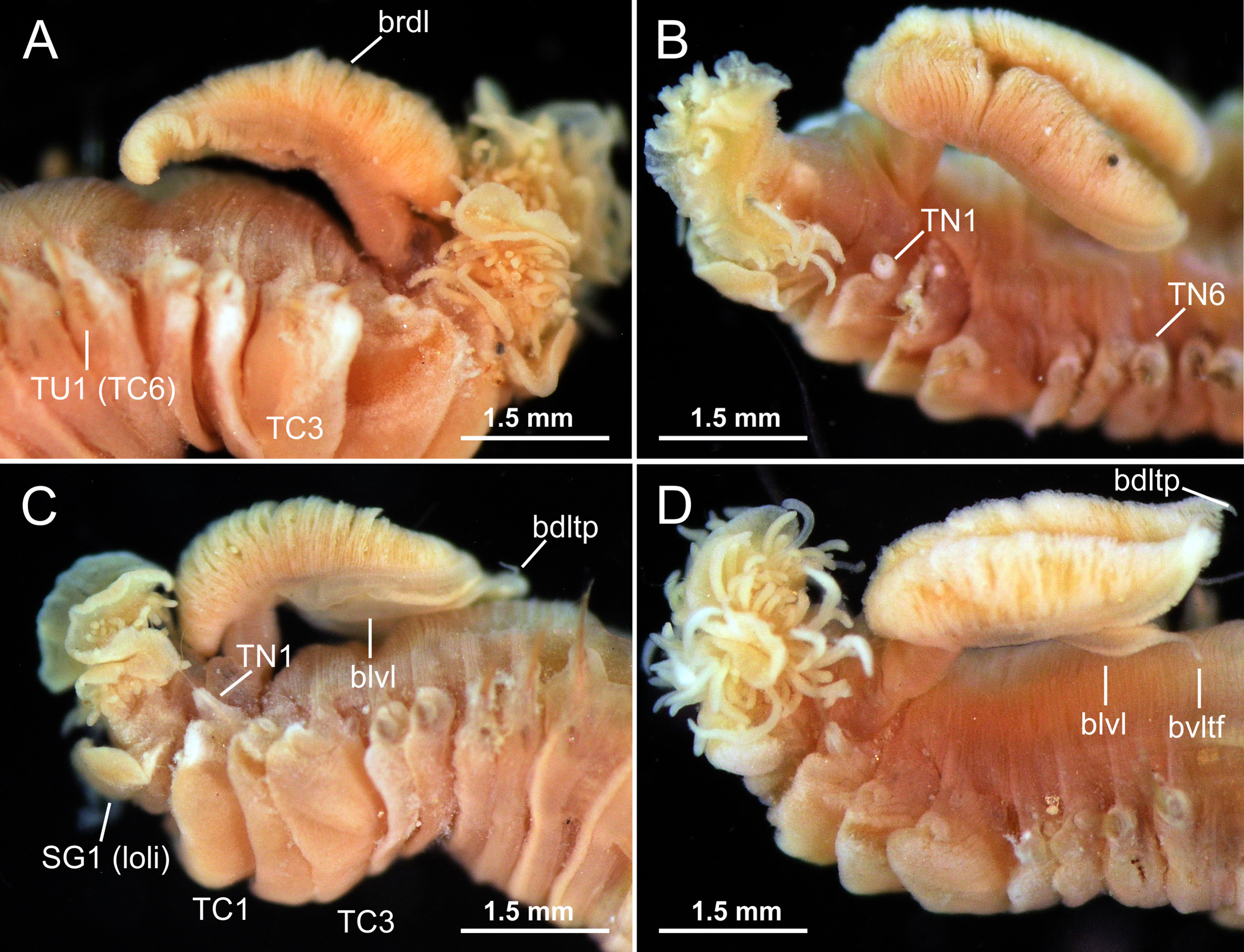 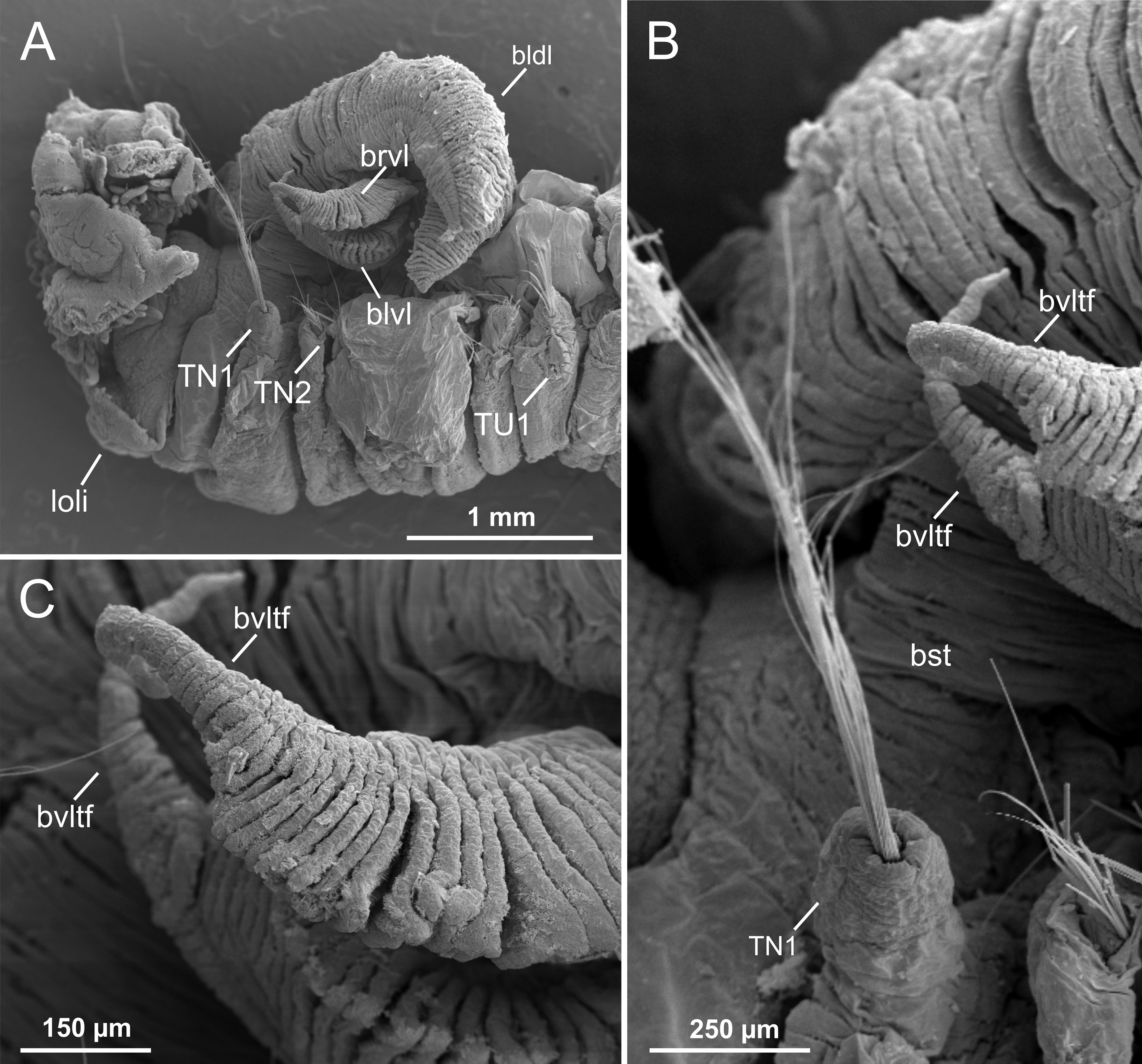 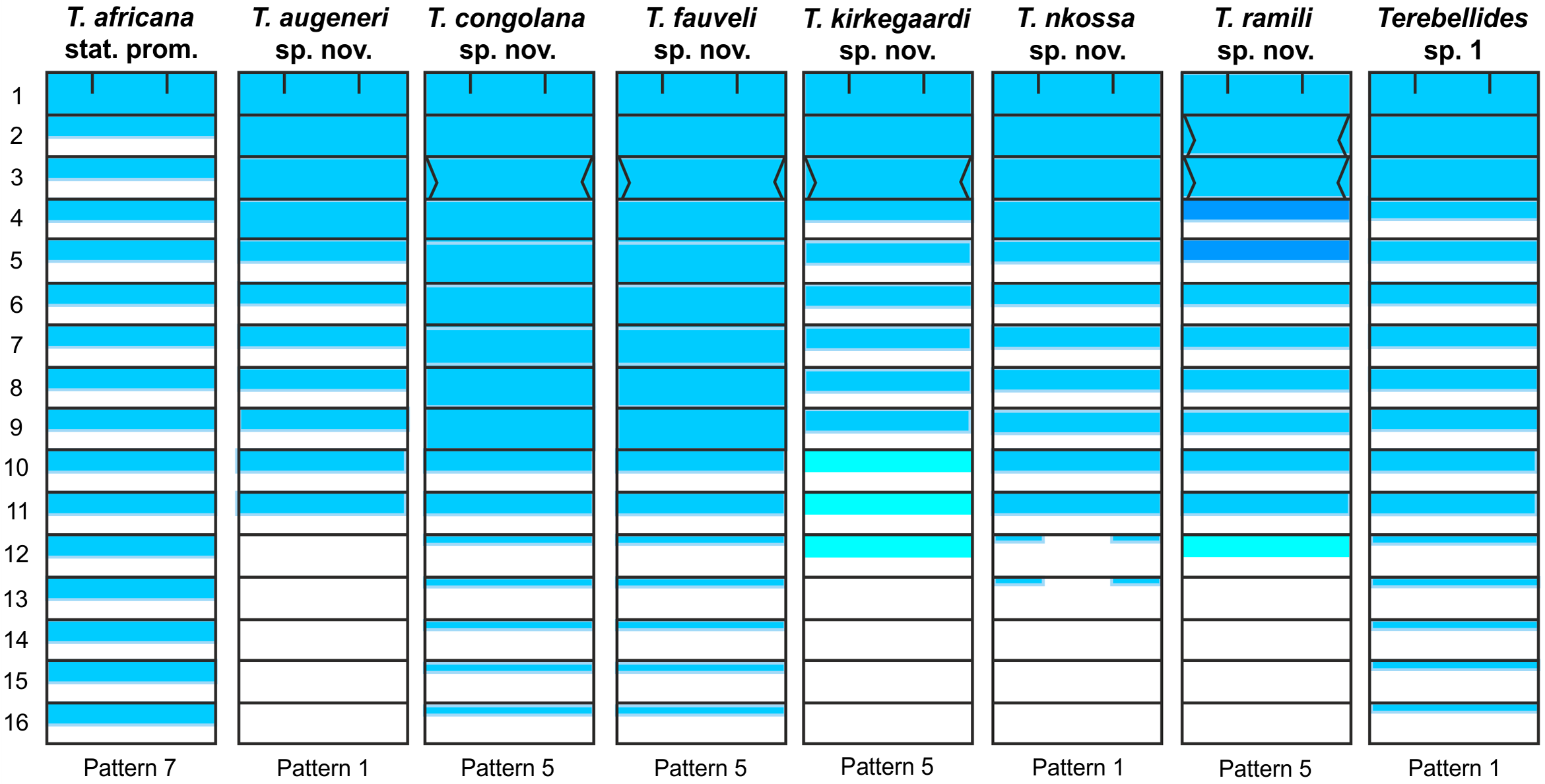