Diagnosis. Uniquely derived characters of this genus include: the single, strong seta at the tip of the fourth palpal segment; the somewhat narrowed eyes at the vertex of the head; the placement of parts of the male terminalia beyond the posterior half of the gonocoxite; the presence on the gonocoxite of a posteroventral lobe; the female cerci with many elongate, broad, round-tipped setae on distal half; the reduced number of larval papillae, some with very long setae; the very short shaft of the spatula, and the conical pair of protuberances on the pupal vertex. Other non-unique derived characters that serve to limit this genus are: the reduced number of curved setae and enlarged alveoli on the female flagellomeres; R 5 reaching C slightly anterior to wing apex; the cylindrical and completely setulose gonostylus: and the elongate-protrusible ovipositor with fused cerci.

Pupa ( Figs. 38–40 View FIGURES 35 – 42 ): Integument unpigmented except for antennal bases and enlarged abdominal spicules. Vertex on each side with large, conical, pointed projection and large seta situated on conspicuously raised base. Antennal bases each with two prominent conical projections, one apically, the other basally. Face smooth, without lobes; with 2 papillae on each side of labellum, the outer with seta, the inner without; on each posterolateral corner 2 papillae, 1 with seta, 1 without. Prothoracic spiracle moderately long. Abdomen ( Fig. 38 View FIGURES 35 – 42 ) on second through sixth segments with elongate, anteriorly recurved spiracles; second through sixth terga with enlarged, spinose spicules at midlength on dorsum; terga elsewhere and pleura and sterna uniformly covered with short spicules.

Larva, third insta r ( Figs. 41–42 View FIGURES 35 – 42 ): Body elongate, generally spindleform, deeply incised intersegmentally. Head capsule black, hemispherical, apodemes much shorter than head capsule; antennae conical, about as long as wide. Spatula ( Fig. 53 View FIGURES 52 – 53 ) short, shaft wider than long, with 2 long, acute, anterior teeth. Integument white, dorsally with short spicules anterior to dorsal papillae and large, black, pointed verrucae posterior to dorsal papillae; ventrally with rows of minute spicules centrally; elsewhere, including collar segment, smooth. Papillae reduced in number, some setae very long: present are a pair of lateral short-setose papillae on each side of spatula, pair of setose ventral papillae and pair of sternal papillae without setae on all thoracic and first through seventh abdominal segments; 4 dorsal and, on each side, 2 pleural papillae on thoracic and first through seventh abdominal segments, setae of the dorsal papillae and the dorsalmost pleurals black and very long; eighth abdominal segment without dorsal papillae and only 1 short-setose pleural papilla per side; terminal segment with 6 papillae with short setae.

Etymology. The name Pellacara combines the Greek pella and cara, for black and head, respectively, in reference to the black head capsule of the larva. This is the first instance noted of a black instead of a brown larval head among Cecidomyiinae   .

Remarks. No other genus of Neotropical Lasiopteridi has such distinctive male terminalia, with most of the inclusive parts situated beyond the midlenth of the gonocoxite, and with the gonostylus broad and evenly cylindrical throughout its length. Pellacara resembles Myrciariamyia Maia (1995)   among unplaced Neotropical Lasiopteridi in having enlarged spinules on the pupal abdominal terga. The enlarged spinules are a modification that presumably allows a pupa to gain purchase against the gall wall while exiting. In this case, the resemblance appears to be superficial because the two genera are otherwise distinct. Myrciariamyia   adults have the more usual type of male terminalia, with the various parts connected to the base of the gonocoxites, and fused female cerci that are deeply notched and splayed. Also, it appears from the drawings in Maia (1995) that Myrciariamyia   , unlike Pellacara, has lost the anterior pair of trichoid sensilla of the abdominal tergites and sternites. 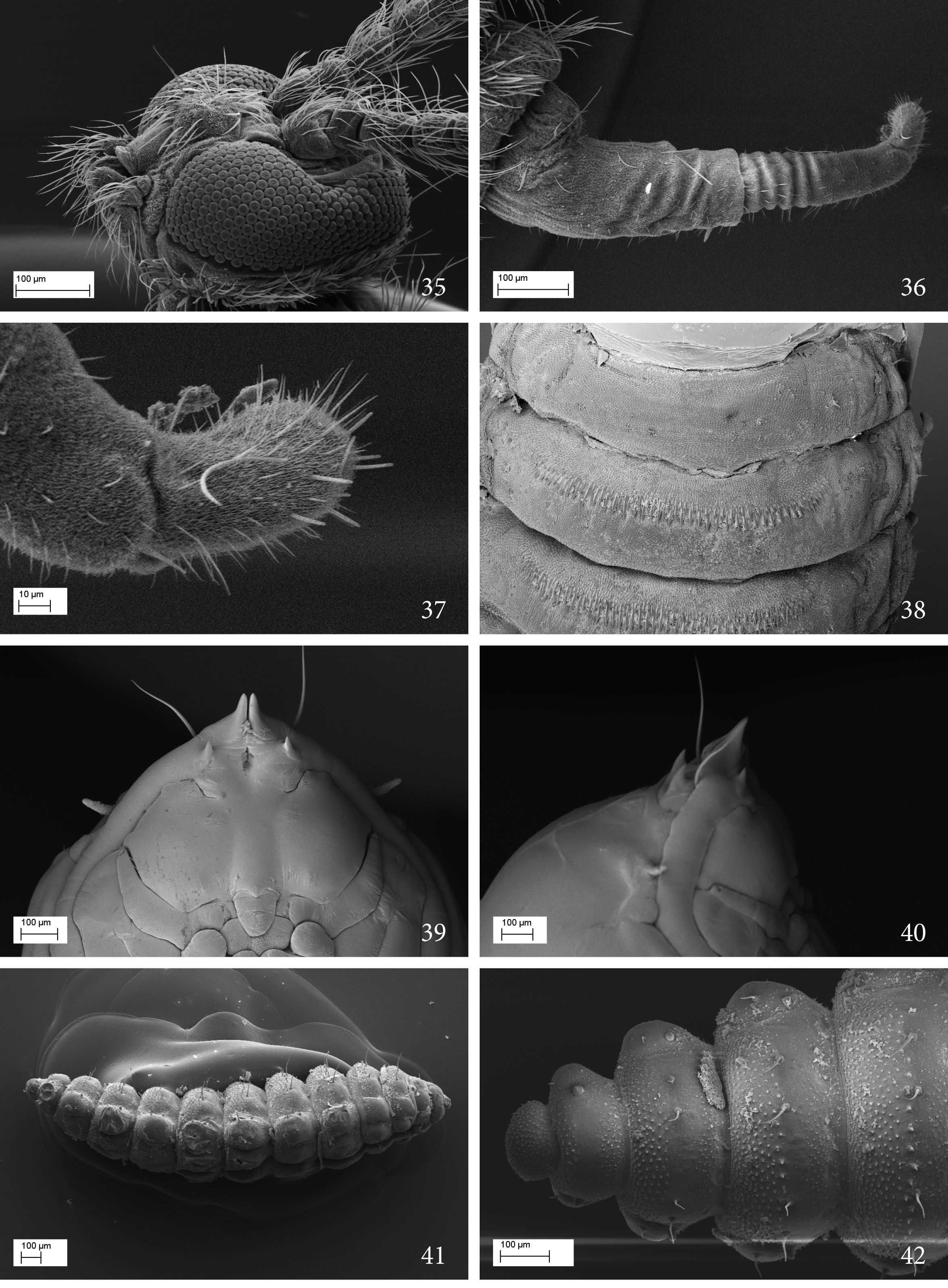