Diagnosis. Uniquely derived characters of this genus are: the separated eyes at the vertex; the swollen tarsal claws; the abdominal tergites and sternites not demarcated by sclerotization from surrounding area; the swollen female fused cerci covering the end of the abdomen; and the sclerotization of the area surrounding the spatula. Other non-unique derived characters that serve to limit this genus are: the palpus of a single large segment bearing some setae appreciably longer than the palpus; antennae reduced to 10–11 flagellomeres; greatly reduced number of bent setae and enlarged alveoli on the female flagellomeres; R 5 reaching C slightly anterior to wing apex; and abdominal sclerites lacking an anterior pair of trichoid sensilla.

Female abdomen (Figs. 21, 33): Tergites and sternites undefined as in male except that setation of seventh and eighth tergites similar to preceding segments and eighth sternite unmarked with setae. Ovipositor only slightly protrusible, setose posteroventrally, setae fairly dense and of uniform length; cerci fused, swollen and foreshortened, covering posterior end of ovipositor, with peripheral setae as long as posteroventral setae of protrusible part of ovipositor and posterior surface covered with very short, dense, erect setae no longer than surrounding setulae; hypoproct in ventral depression of fused cerci.

Larva, third instar: Integument smooth. Head capsule hemispherical, without apodemes; antennae about as long as wide. Venter of first thoracic segment ( Fig. 34 View FIGURES 24 – 34 ) with spatula bilobed at apex and considerably broadened at posterior end of shaft, and a lunulate area anterior to spatula beginning at collar segment and encompassing sternal papillae. Papillae other than prothoracic sternal papillae not visible in preparations. Spiracles visible but tiny.

Etymology. The name Anapeza combines the Greek words ana and peza to mean "without a border," in reference to the lack of sclerotized demarcation on the abdominal sclerites.

Remarks. Anapeza most resembles Novocalmonia Ozdikmen   among other unplaced Neotropical genera of Lasiopteridi chiefly in reductions of body parts, such as the one-segmented palpus, the short antenna, the widely separated antennal bases of the pupa, and the reduction of larval papillae ( Gagné & Etienne 2009). Species of both genera are tiny, but with miniaturization the same body parts are affected and cannot be presumed synapomorphic. The two genera differ most strikingly in that Anapeza has unpigmented, differentially unsclerotized abdominal sclerites that are well delimited in Novocalmonia   . Major differences between the two genera are in the female cerci and tarsal claws. Cerci of Anapeza are fused and bulbous (Fig. 21) while those of Novocalmonia   are discrete and much smaller. The swollen tarsal claws of Anapeza ( Figs. 27–28 View FIGURES 24 – 34 ) are unlike any found elsewhere in Lasiopteridi. 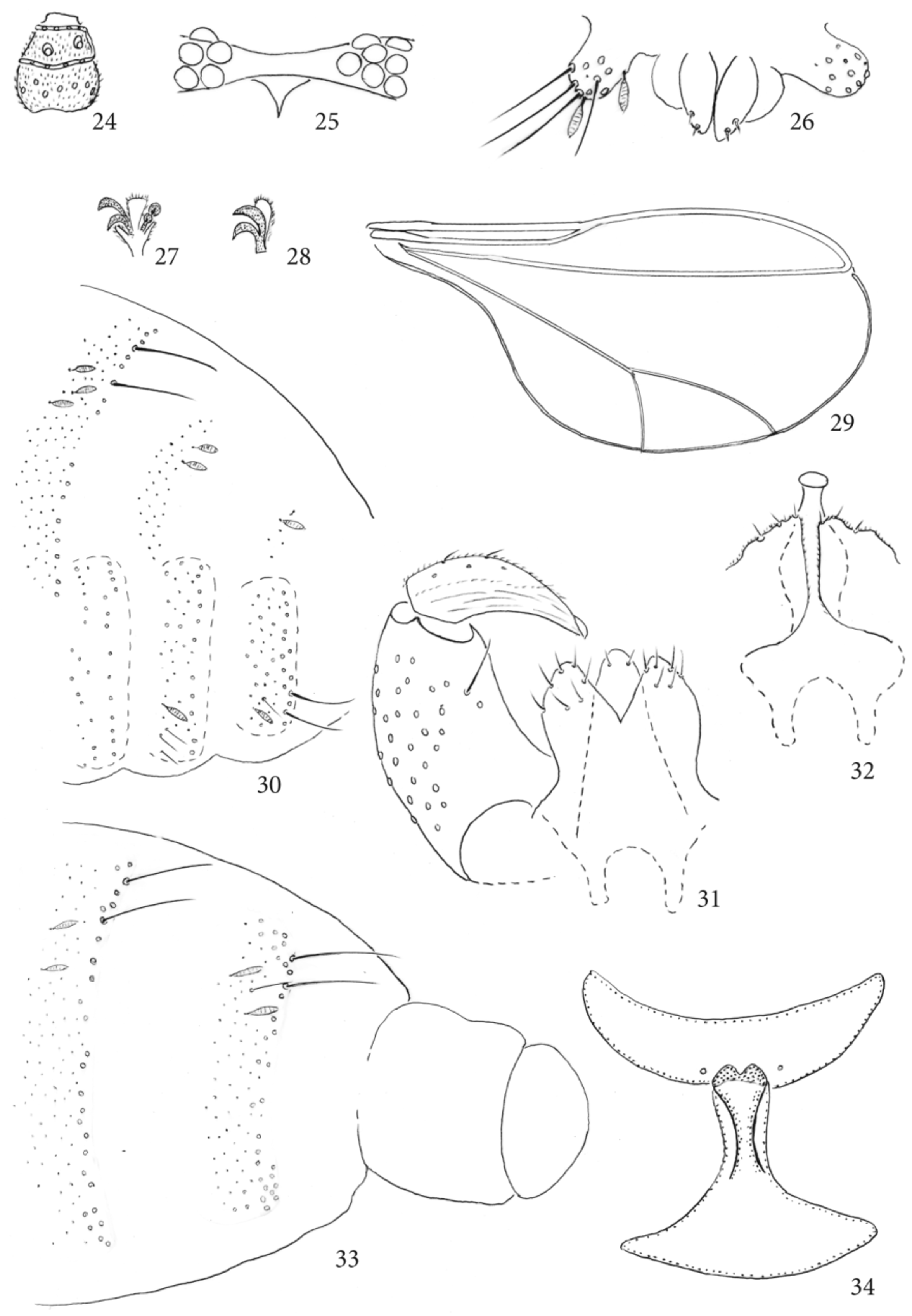