Diagnosis. Uniquely derived characters of this genus include the short, strong setae present on all palpal segments, the broad male seventh and eighth tergites without vestiture, the planiform female fused cerci, and the reduction in number of larval papillae, some of them with enlarged setae. Other non-unique derived characters that serve to limit this genus are the three-segmented palpus with some strong, short setae, the lack of trichoid sensilla on the abdominal terga and sterna, and the tapered, protrusible ovipositor with fused cerci.

Description. Adult: Head ( Fig. 5 View FIGURES 5 – 13 ): Eyes at vertex nearly connate, about 5 facets long. Eye facets circular, contiguous except slightly farther apart near level of antennal bases and between the eyes at vertex. Antenna: scape and pedicel with a few setae and several setiform scales ventrally; first and second flagellomeres connate. Male antenna with 15–16 flagellomeres, all but apical with short necks; flagellomeres ( Fig. 6 View FIGURES 5 – 13 ) with circumfila consisting of a complete subbasal ring and a partial distal ring connected by two vertical strands; short, straight setae encircling base below proximal circumfilum, many long, basally curved setae from hooded alveoli situated between circumfilar rings, these present chiefly on venter. Female antenna with 17–18 flagellomeres ( Fig. 7 View FIGURES 5 – 13 ), as for male but without necks, with 2 complete circumfilar rings, and with fewer hooded alveoli and their setae. Frons with many setae and setiform scales. Labella hemispherical in frontal view, with several, strong setae apically. Palpus of 3 segments, first and second spheroid, not much longer than wide, the third usually about twice as long as wide, all segments variously covered with scales and setae, including short, strong setae similar to those of labella.

Larva, third instar ( Figs. 18–19 View FIGURES 14 – 18 View FIGURE 19 ): Cylindrical. Head capsule hemispherical, apodemes about as wide as head; antennae about as long as wide. Spatula ( Fig. 18 View FIGURES 14 – 18 ) robust, elongate, with 2 triangular, anterior teeth. Spiracles present on metathorax. Integument: with large pointed verrucae present on dorsum of first thoracic segment, also a less extensive area on second thoracic segment, and present elsewhere laterally and dorsolaterally on remaining segments, also dorsally but not pointed on eighth abdominal and terminal segments; short, pointed spicules present on anterior and posterior thirds of venter of third thoracic segment and all abdominal segments; smooth elsewhere. Papillae: reduced in number, their setae, when present, barely longer than socket width; present are one group of 3 lateral papillae, 2 setose, on each side of spatula, 4 dorsal and, on each side, 2 pleural papillae on each thoracic and on first through seventh abdominal segments, 1 ventral papilla on each side of eighth abdominal segment, and 6 terminal papillae; abdominal sternal papillae not apparent.

Etymology. Faramitella is Latin-derived, combining the first part of Faramea   , the host's generic name, and most of remitella (small paddle) in reference to the flat, flipper-like, fused female cerci.

Remarks. Nothing relates Faramitella to the other two genera described here or to Apodiplosis Tavares   , the only other genus of Lasiopteridi known from Rubiaceae   and described from the female and pupa taken from leaf galls of a Brazilian Psychotria   sp. Apodiplosis   has discrete instead of fused female cerci, and simple instead of toothed tarsal claws. Males of Faramitella are distinct for their wide male seventh and eighth tergites that are very broad and devoid of vestiture, and females for the fused and flattened cerci that are unlike any known elsewhere. The striking presence of short, strong setae on each of the three adult palpal segments is presumably unique among unplaced genera of Neotropical Lasiopteridi. Interestingly, the larva has metathoracic spiracles. Cecidomyiids are normally peripneustic and lack the metathoracic spiracles. The only other known instance of metathoracic spiracles in Cecidomyiidae   occurs in Novocalmonia paucula Gagné (Gagné & Etienne 2009)   , another taxon of Lasiopteridi with no apparent close relationship to Faramitella. The larva of Faramitella is unique among unplaced Neotropical Lasiopteridi for its very large spatula, and a reduced number of papillae with setae shorter than their sockets. 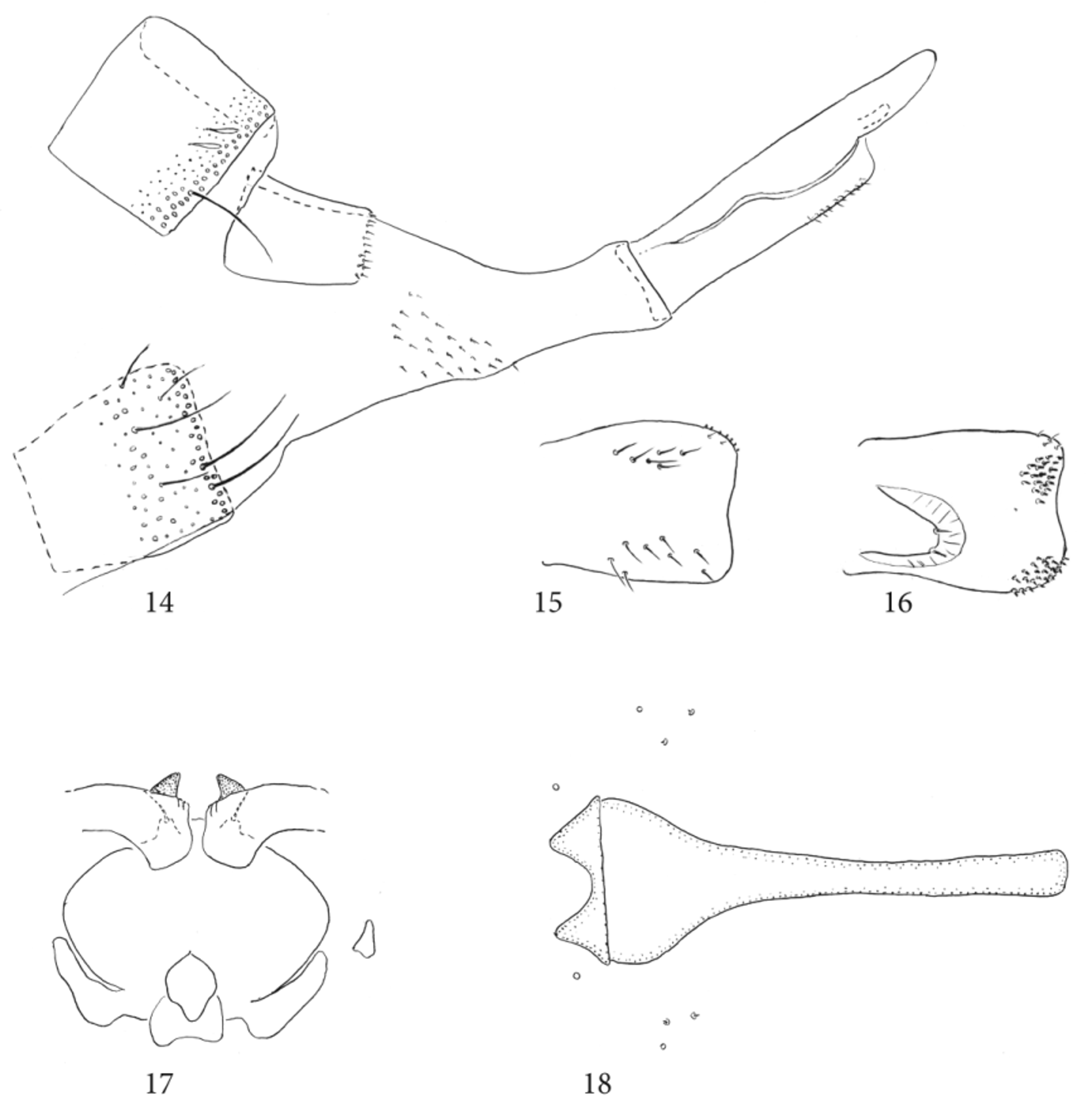