1. If viewing in electronic form, figures may be zoomed in for more detail as the images are high resolution.

Right chela (left in Figs. 2View FIGURE 2 c –f) distinctly elongate, subovate in cross section, weakly depressed. Mesial margin with row of 8 tubercles subtended by more squamous ones dorsally and ventrally; tubercles present over all except ventrolateral part of palm and also present on basal parts of both fingers. Dorsal and ventral longitudinal ridges not obvious on either finger. Opposable surface of fixed finger with dorsally situated row of 10 (12 on left) tubercles along proximal third and lower row of 7, one of which much larger than other tubercles on finger; broad band of minute denticles situated between rows of tubercles extends entire length to base of corneous tip of finger; except for proximolateral squamous tubercles, finger is covered by scattered weak to moderate punctations. Opposable margin of dactyl with row of 8 (9 on left) tubercles on proximal fourth; broad band of minute denticles present on distal 4 / 5 ths; mesial surface with row of 3 (4 on left) tubercles on proximal fourth followed distally by punctations; dorsal and ventral surfaces weakly punctate.

Carpus of cheliped longer than broad with distinct oblique furrow dorsally, tuberculate mesially, dorsomesially and ventromesially; mesial surface with 2 tubercles larger than others, one near midlength and one distomesially; ventral surface with usual 2 tubercles on distal margin.

Hooks on ischia of third and fourth pereiopods ( Fig. 2View FIGURE 2 h) simple, that on third overreaching basioischial articulation, that on fourth not overreaching articulation and not opposed by tubercle on corresponding basis.

Allotypic female. Differing from holotype, except in secondary sexual characters, as follows: Areola 18.1 times as long as wide with no punctations at narrowest part. Cephalic section of carapace 1.8 times as long as areola, length of latter comprising 35.3 % of entire length of carapace (44.9 % of postorbital carapace length). Acumen with apex reaching distal margin of ultimate segment of antennular peduncle, base with weak marginal tubercles. Rostrum without hint of median carina. Abdomen slightly longer than carapace (44.0 and 41.1 mm, respectively).

Main body of epistome with less distinct longitudinal groove, cephalic end approaching form of fovea. Both flagella broken, missing distal extremities. Antennal scale 1.9 times as long as wide. Right chela less distinctly elongate and somewhat more depressed; mesial margin of palm with row of 6 tubercles; opposable surface of fixed finger with dorsally situated row of 7 (5 on left) tubercles along proximal third (one larger than rest) and single large tubercle corresponding to lower row in holotype; opposable margin of dactyl with row of 11 (12 on left) tubercles on proximal half. Merus with few weak tubercles distomesially; ventral surface with mesial row of 11 (12 on left) tubercles and lateral row of 6 (11 on left). Ischium with ventromesial row of 4 tubercles (5 on left). Annulus ventralis and adjacent sternal region ( Figs. 5View FIGURE 5 a, b) as described in "Diagnosis".

Morphotypic male, form II. Differing from holotype in following respects: Cephalothorax slightly raised. Areola 14.5 times as long as wide. Cephalic section of carapace 2.1 times as long as areola, length of latter 32.2 % of entire length of carapace (41.5 % of postorbital carapace length). Rostrum with more distinct indentations at base of acumen, dorsal surface without hint of median carina and with punctations restricted to lateral margins. Cervical spine present. Abdomen slightly longer than carapace (37.8 and 36.0 mm, respectively). Cephalic lobe of epistome apunctate. Flagellum of antenna nearly reaching caudal margin of telson. Antennal scale 2.4 times as long as wide. Right chela mesial margin with row of 6 tubercles; opposable surface of fixed finger with dorsally situated row of 6 tubercles and lower row represented by single large tubercle at midlength; opposable margin of dactyl with row of 10 (11 on left) tubercles on proximal third. Ventral surface of merus with mesial row of 13 (15 on left) tubercles and lateral row of 11 (7 on left). Ischium with ventromesial row of 4 tubercles. Hooks on ischia of third and fourth pereiopods and bosses on fourth and fifth much reduced. First pleopods ( Figs. 4View FIGURE 4 b, c) with all terminal elements evident, but noncorneous and reduced compared to holotype; cephalic process and central projection directed at about 80 degrees to axis of shaft; subapical setae present; juvenile oblique suture clearly visible on shaft.

Type locality. Canal and roadside ditch near Interstate 37 and County Road 17, San Patricio County, Texas (28.09435, - 97.80987). Site is bordered by a large highway and cropland. At time of collection, the ditch contained water one foot deep and 12 feet wide, but appeared temporary as the bottom contained non-hydrophilic vegetation. The canal was unvegetated and unflowing with water to one meter deep.

Disposition of types. The holotype, allotype, and morphotype (Nos. 1154636, 1154637 and 1154638) are deposited in the National Museum of Natural History, Smithsonian Institution. The paratypes remain in the author's collection, but will ultimately be deposited at the same location.

Variations. The palm width of the cheliped of most first form males is proportionately wider than in the holotype, indicating the holotype's chelipeds could possibly have been regenerated from a young age; although its tuberculation is not significantly different from that of other first form males. The number of tubercles on the opposable margin of the fixed finger varies from 4 to 12; while the number for the opposable margin of dactyl varies from 8 to 12. The gap between the proximal extremities of the first pleopods of first form males is always present, but varies in width from 1.5 % to 7.6 % of the pleopod length. A large majority of specimens show no hint of a rostral median carina; however, one paratype has a pronounced one and the holotype has a hint of one. In small juveniles with carapace lengths from 7 to 17 mm, the marginal spine at the base of the acumen is well developed; the spine is occasional present in medium sized individuals; in adults the spine is missing or reduced to a barely discernible tubercle, a marginal indentation is always present however. Cervical and branchiostegal spines are comparatively more pronounced in younger specimens. In small females, the caudomedian tongue-like prominence of annulus ventralis is less pronounced than in adults.

Further supporting Procambarus ( O.) luxus  as a valid species is its geographic isolation from other members of the subgenus. Its range is separated from that of the geographically closest "member", the zonangulus  - texanus  complex (defined in "Introduction"), by 80 km and from that of P. ( O.) nueces  by 110 km, while the ranges of P. ( O.) acutus  and P. ( O.) nechesae  are far removed. 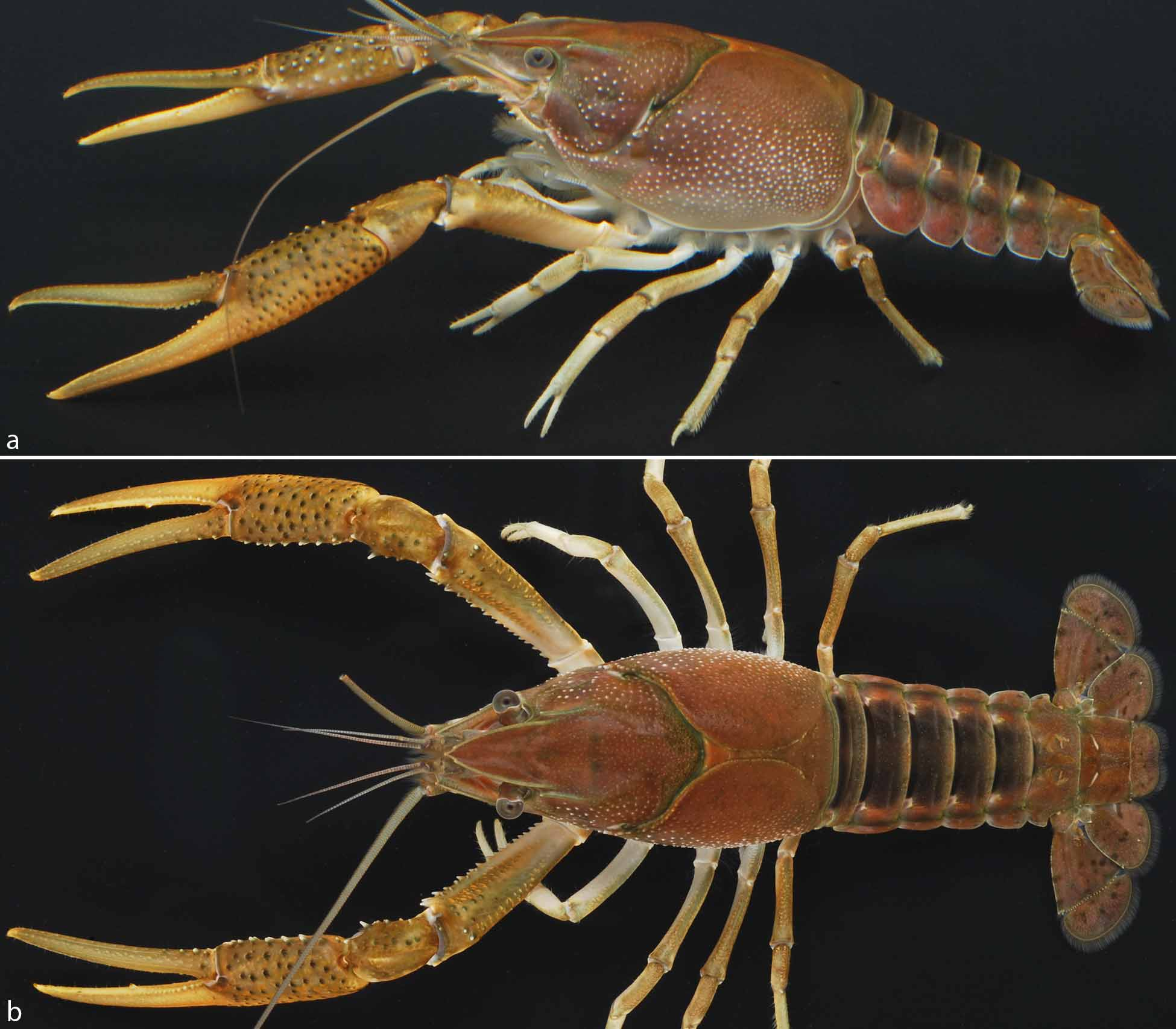