Description. Body moderately elongate, subcircular to posterior third of tail, then becoming more compressed, its depth at gill openings 24–28 in TL. Branchial basket moderately expanded. Head length 4.2–4.9 in trunk length. Head and trunk 1.8–1.9, head length 9.6–11.1, and tail length 2.2 in TL. Snout rounded, moderately acute when viewed from above; a short groove bisecting underside of snout from the mid-base of anterior nostril tube. Upper jaw overhanging, snout tip extends forward by diameter of orbit. Upper jaw not elongated, rictus behind a vertical from posterior margin of eye by diameter of eye. Eye not enlarged, 2.9–3.1 in upper jaw and 6.8–9.4 in head. A shallow groove along interorbital region from snout to nape. Anterior nostrils tubular, not elongate, extending ventrolaterally from snout at ca. 30 o, reaching snout tip and chin when directed to them. Posterior nostril opening medially directed in upper lip, not visible externally. Two minute barbels along lower edge of lip of upper jaw, the first between the anterior and posterior nostrils, the second below mid-orbit. Dorsal-fin origin begins above middle of pectoral fin, predorsal length 7.3–8.6 in TL. Median fins obvious, not set in shallow grooves, slightly elevated and moderate in height anteriorly, then notably elevated approximately one-half head length prior to the tail tip, then diminishing in height approximately a snout length in advance of the pointed tail tip. Pectoral fins elongate, not lanceolate, the longest rays in dorsal third. Length of pectoral fins 2.7–2.8 in head length, 26–31 in total length. Gill openings about twice in isthmus width, from mid-body to below pectoral-fin bases, its upper edge opposite upper pectoral-fin rays. Head pores apparent ( Figs. 1View FIGURE 1 & 2View FIGURE 2). Single median interorbital and temporal pores. Supraorbital pores 1 + 4, infraorbital pores 4 + 2, lower jaw pores 5, preopercular pores 3, supratemporal pores 3. Faint rows of sensory papillae visible along the nape. Lateral-line pores apparent: 9 before gill opening in an arching sequence, 71 before mid-anus, total 147 pores. The last pore before the tail tip in a distance a little greater than eye diameter.

Teeth small, conical, uniserial, slightly retrorse and not close-set ( Fig. 3View FIGURE 3). One medial followed by 2 teeth medially and 2 laterally at tip of snout, followed by an intermaxillary rosette of 2 medial and 2 lateral irregular pairs of teeth, followed by a gap, then a single row of 12 small vomerine teeth, decreasing in size posteriorly. Maxilla with 9–10 uniserial teeth on each side. Lower jaw with 11–12 teeth in a single row.

Etymology. From Latin, in reference to its coloration.

Distribution. Known from the holotype and paratype, trawled from a soft substratum from 35–63 m depth off Jizan, southern Saudi Arabia. At this point it is considered a Red Sea endemic.

Remarks. The new species differs from the majority of its congeners in having its anal-fin origin behind midbody and in having fewer total vertebrae. It is most similar in its morphology and meristics to Ophichthus echeloides ( D’Ancona 1928)  from the Red Sea, and to Ophichthus oligosteus Hibino, McCosker & Tashiro 2019  from Tosa Bay, Kochi, Japan ( Hibino et al. 2019a). Ophichthus echeloides  was described as Leptocephalus echeloides  based on a leptocephalus captured in 1923 at 276 m depth near Perim (= Barim) Island, located near the intersection of the Red Sea and the Gulf of Aden. It had the characteristics of an ophichthid, however, no one was able to assign it to a described species. An adult Ophichthus  was captured in 1989 by a trammel net at 300 m off Eilat, in the Red Sea.

The new species is also similar in its morphometry and meristics to Ophichthus ishiyamorum McCosker 2010  , a deepwater species from the Gulf of Aden, Somalia, where it was trawled and trapped between 258– 400 m. Ophichthus ishiyamorum  is similar in possessing a wedge-shaped pectoral fin, a dorsal-fin origin slightly in advance of the pectoral-fin tip, uniserial dentition, and a third preopercular pore. It differs from the new species in its body proportions (tail 52–55% and head 14–15% of TL) and vertebral number (MVF 15–50–131, total vertebrae 130–132).

Ophisurus apicalis Bennett 1830  was described from Sumatra in two lines of text and without an illustration. Nothing in its terse description could separate it from our new species as well as several other recognized taxa. The type specimen is lost. Data for the species are scarce, McCosker & Castle (1986) reported its tail length to be about 1.6 in TL and its total vertebrae 136–139; Kimura et al. (2018) did not provide the tail length but gave total vertebrae as 138–141. In addition, O. apicalis  has biserial vomerine teeth. All three characters differentiate it from O. olivaceus  . Y. Hibino is preparing an extensive description and history of the taxon and will be creating a neotype. Kimura et al. (2018), in additional to their five described species, briefly reported upon five unrecognized species from Vietnam. Their Ophichthus  sp. 5 is very similar to O. olivaceus  in having olivaceous coloration, but described it as having two rows of teeth on its vomer.

Molecular phylogenetics. The two specimens of Ophichthus olivaceus  sp. nov. form a joint clade that is sister to a clade formed by two specimens of O. lithinus  , both collected from the Western Pacific (i.e., Philippines and Taiwan, respectively, see Fig. 4View FIGURE 4). The two most closely related sequences of any specimen from each of the two clades are in average 0.015 nucleotide substitutions apart from each other, corresponding to a HKY distance value of 0.7 percent. The next higher nodes in the phylogeny did not receive substantial support from bootstrapped analyses, but together with 15 other sequences those from O. olivaceus  and O. lithinus  form a well-supported larger clade within the Ophichthinae  . Most of these are also identified as members of Ophichthus  by the respective sequence authors, but several sequence vouchers are identified as members of the genus Pisodonophis  . 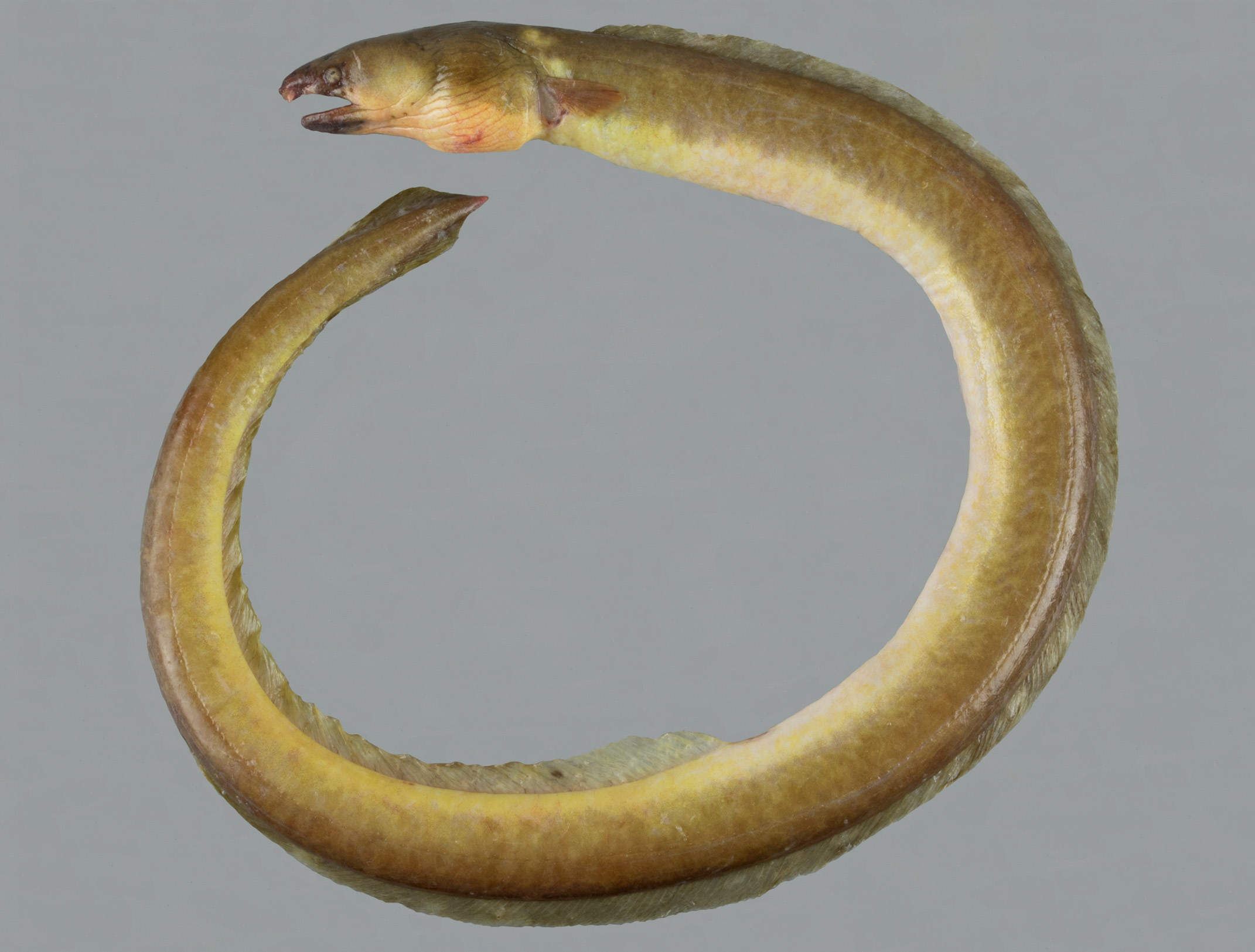 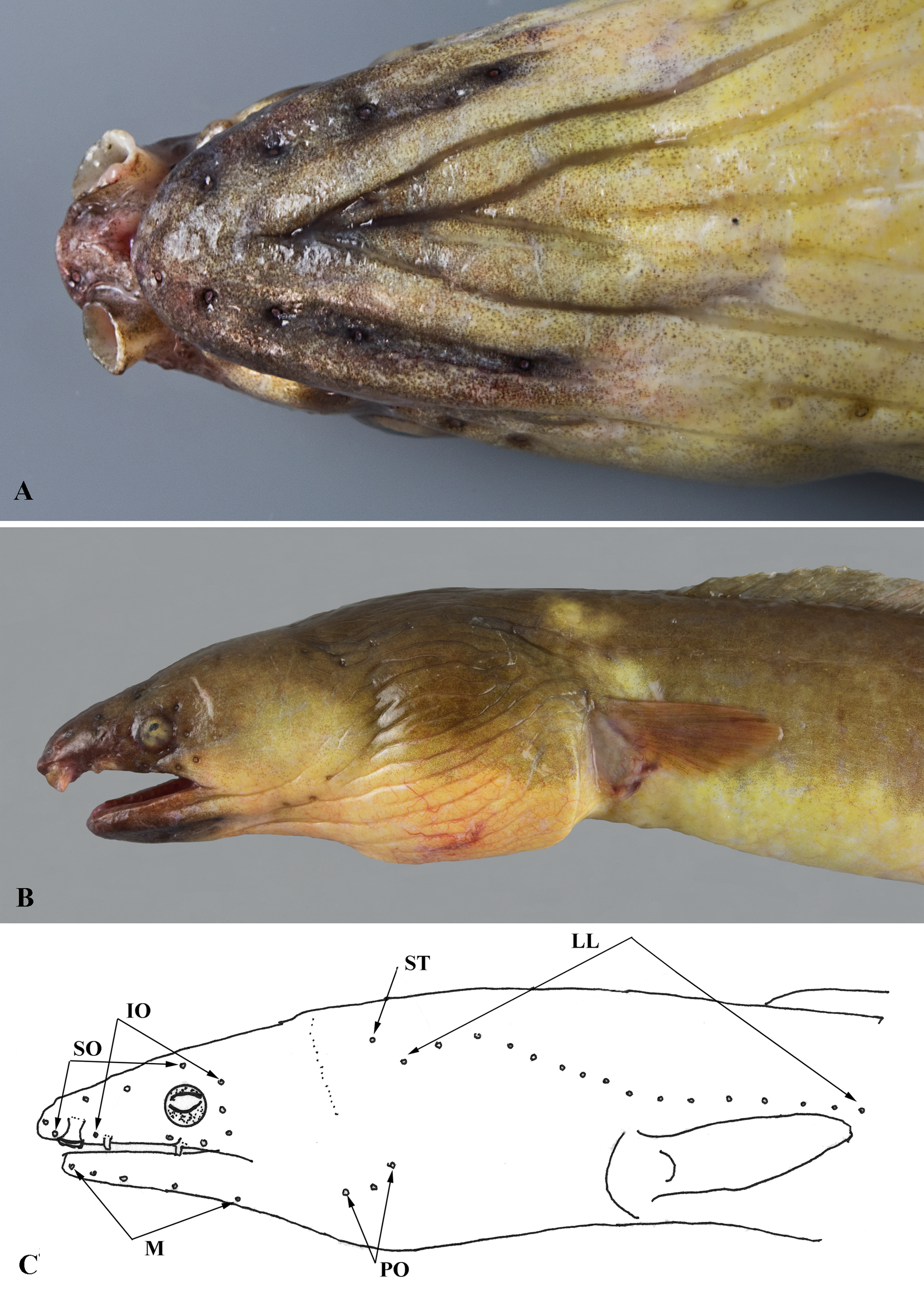 FIGURE 4. Maximum Likelihood phylogenetic tree based on partial sequences (652 bp) of the mitochondrial COI gene includ- ing available sequences of Ophichthinae and COI barcoding sequences from the two type specimens of Ophichthus olivaceus sp. nov. and several sequences of the subfamily Myrophinae as the outgroup. Branches with 100 percent support from bootstrapped analyses (1.000 replicates) are depicted as broad lines, other bootstrap values higher than 50 percent are shown. Scale bar represents the average number of nucleotide nucleotide substitutions per site.