Diagnosis. Panorpa cryptica  can be differentiated from the similar P. nebulosa  by the tufts of setae on the apices of the male basistyles not borne on pronounced caudally directed tubercles or lobes as in P. nebulosa  . Further, the male ventral parameres are thin and nearly sigmoidal, typically curving corkscrew-like ventrally out of the genital bulb.

Etymology. The specific name cryptica  or “hidden” refers to the morphologically cryptic nature of this species.

Taxonomic remarks. Panorpa cryptica  appears very similar to P. n e bu l o s a and somewhat similar to P. f l e xa, but the males of P. cryptica  differ in having thin, nearly sigmoidally curved ventral parameres, which typically curve corkscrew-like ventrally out of the genital bulb. The ventral parameres of P. nebulosa  are slightly thicker, are either straight or curve slightly mesad, and remain within the genital bulb. Further, the tufts of long, black setae on the apices of the basistyles of P. cryptica  (Fig. 7) are not borne by pronounced caudally directed tubercles or lobes, whereas those of P. n e bu l o s a (Fig. 8) are pronounced in all specimens examined from Wisconsin to Canada and New England to Tennessee. The basistyle apices of P. flexa  (Fig. 9) are somewhat similar to those of P. cryptica  , but the dististyles have shorter and thicker falcate tips than P. cryptica  and P. nebulosa  . The ventral parameres of P. flexa  curve strongly mesad, and the apices are broad, bare, and do not curve ventrally out of the genital bulb. Panorpa acuta  may be readily differentiated from P. cryptica  and all other North American Panorpa  by its unique truncate tergum 9 and uniquely shaped dorsal parameres and hypovalves.

In the field, P. ac u t a appears comparatively larger and males have a reddish orange abdomen (segment 6). Panorpa flexa  typically has a black abdomen (segments 2–5) and unmarked or faintly marked wings. Panorpa cryptica  is the smallest of the four species and the males have a paler genital bulb than P. n e bu l o s a. Panorpa cryptica  flies earlier in the year than P. nebulosa  .

Biology and ecology. Individuals of P. cryptica  were observed from mid-April through until early July sitting horizontally on the top surfaces of vegetation in partially broken to deep shade. Other scorpionflies, such as Panorpa isolata Carpenter, 1931  , tended to be more abundant in areas that offered slightly greater sunlight, while P. cryptica  tended to be more abundant deeper into the forest shade. Males of P. cryptica  were observed on the top surfaces of vegetation ( Fig. 10) offering dead insects to females. Males were not observed offering salivary masses to females, although it is possible that males do when dead insects are scarce. Ma et al. (2011) presented internal structural evidence of why some species of Panorpa  do not offer salivary masses as nuptial gifts. We have not attempted to dissect males of Panorpa cryptica  to determine the extent of development of the male salivary glands. 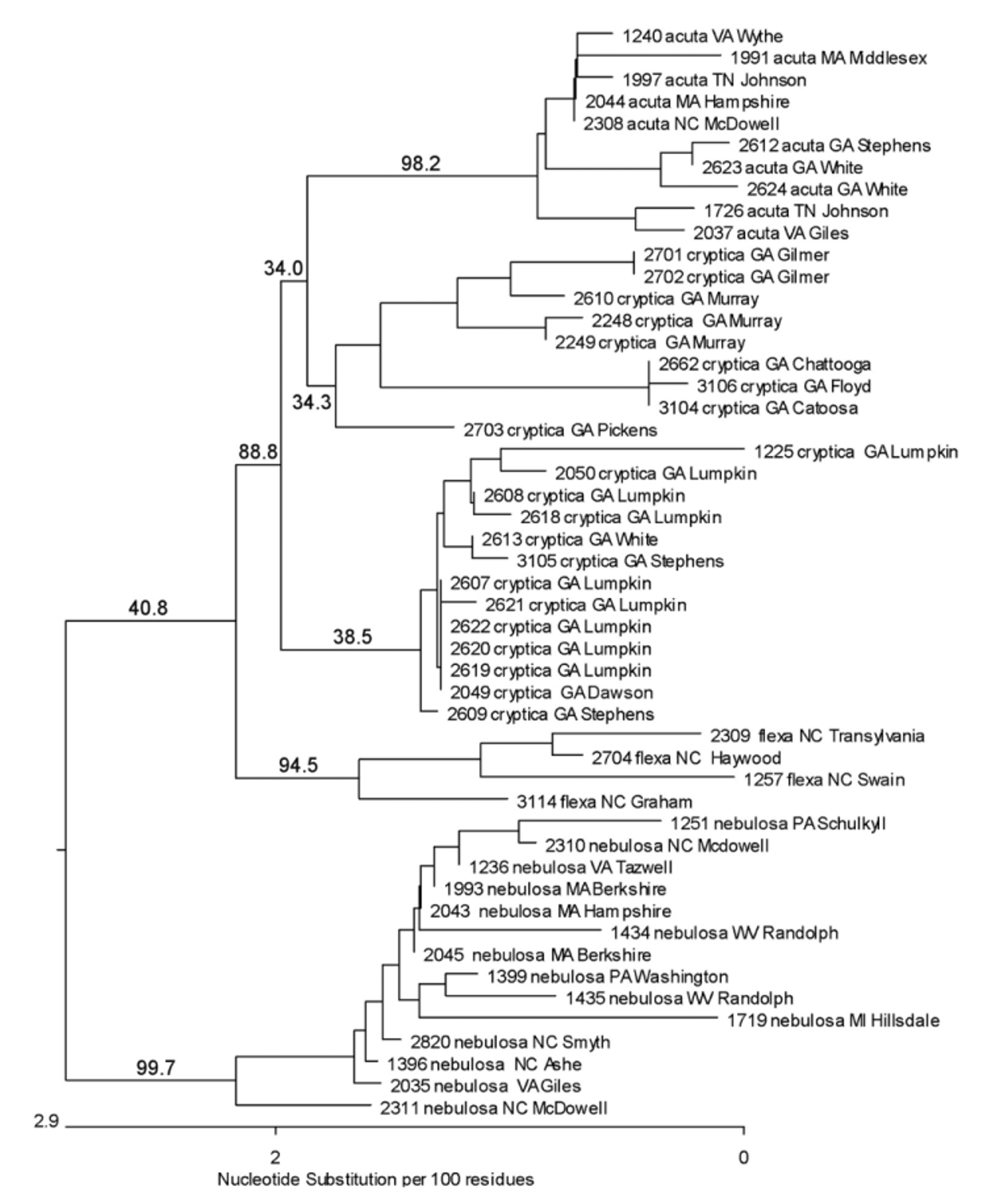 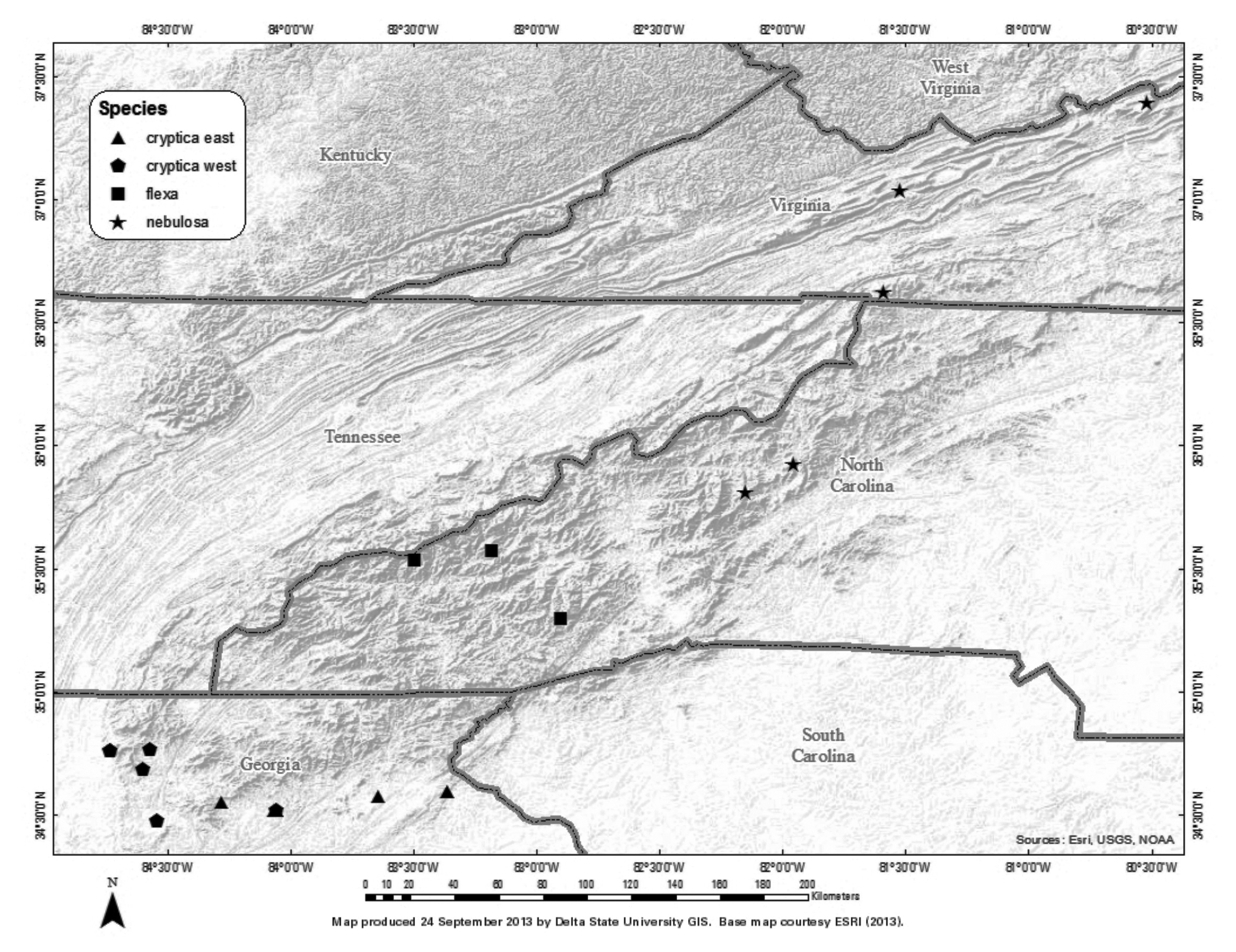