Male. Pronotum: dorsal surface lacking irregularities in posterolateral areas and longitudinal groove in lateral areas; punctures dense; anterior margin not explanate; pronotal width usually less than humeral width, subequal to humeral width in hydrophila   . Anterolateral corners rounded obtuse; lateral margins in anterior half divergent, lateral margins in posterior half either divergent along their length or subparallel-sided in some leii   and ficta   where dimension B=C; lacking indentation at mid-point, or sinuousity in either horizontal or vertical plane; subparallel-sided margins straight; lacking indentation in lateral margin near posterolateral corner, and irregularities at corner; posterolateral corners rounded obtuse, approximately 90 ° or <90 ° in some hydrophila   , lateralis   ; posterolateral corners either not projecting as far as median posterior margin ( leii   , ficta   ), or projecting as far as it and separated from it by a shallow emargination.

Elytron: punctures dense, not linear, not as large as those of pronotum, nor widely and evenly spaced; apices not deflexed; epipleuron and suture extend beyond mid-point, to apex or almost so but not extending around apex and neither expanded in apical half; no interstitial lines well defined; elytral carina absent; in horizontal specimen viewed from beneath epipleuron at elytral base wide, humerus narrowly visible from below; in specimen viewed from above epipleuron first visible at side of elytron anterior to or level with posterior margin of MS; epipleuron developed as lateral ridge along most of length; sutural margins approximate along most of their length in closed elytra; lateral margins parallel-sided.

Head: moderately depressed between eyes except in hydrophila   where it is minimally depressed; moderately exposed in front of pronotum, not capable of complete retraction within prothoracic cavity; eyes moderately separated beneath at level of posterior margin of mouthpart complex; eyes above labrum close to moderately separated; frons-vertex ‘junction’ rounded, not well defined; posterolateral eye excavation not visible in resting head position; antennal sockets on head between eyes, not contiguous, separated by up to, or subequal to, ASW; clypeolabral suture present, flexible, not in front of anterior eye margin when head viewed with labrum horizontal; outer edges of flexible labrum reach inner edges of closed mandibles. Mouthparts: functional; apical segment of labial palpi more than half the length of the apical segment of the maxillary palpi, strongly flattened, shaped like a wide triangle, with inner edge dentate; carrying 3 or more teeth. Antennae: 11 segmented; length subequal to GHW – twice GHW; no segments flattened, shortened, or expanded; pedicel not produced; FS 1 not shorter than pedicel.

Legs: with inner tarsal claw not split; lacking MFC; no femora or tibiae swollen or curved; no basitarsi expanded or excavated.

Aedeagal sheath: elongate, longer than wide, never> 4 times as long as wide; lacking paraprocts; asymmetrical in posterior area where sheath sternite irregularly emarginated on right side from point of attachment of tergite and narrowly to widely emarginated on left side also; sternite appears angulate on L or R sides in some leii   , ficta   where anterior half of sternite is bent to the right; right and left sides of posterior area of sternite bearing toothed projections; posterior area of sternite with elongate dark area in median area, may incline obliquely; median dark area either begins level with tergite attachments or posterior to them; posterior margin entire and rounded or emarginated, shallowly in lateralis   ; anterior half of sternite broad, apically rounded; tergite lacking lateral arms extending anteriorly at sides of sheath sternite; tergite not subdivided, lacking projecting pieces along posterior margin of tergite 9; anterior margin tergite 9 lacking transverse band.

Aedeagus L/W 3 / 1 or shorter; LL lack lateral appendages, are visible from beneath at sides of ML, LL/ ML wide; LL of equal length, slightly shorter than ML, usually close along inner margins in basal area where margins are toothed in lateralis   , then diverging strongly in apical half or more, separated there by> half their length; LL apex width wider than ML apex and much narrower than LL base width; LL apices not expanded horizontally and may be toothed on inner ventral margin; inner margins of LL apices may incline towards the median line (thus inturned); dorsal base of LL symmetrical, not excavated. ML symmetrical, elongate slender I along most of its length with basal section at least 2 – 3 X as wide as rest; lacking lateral toothed projections, moderately arched, apex rounded and slightly expanded when viewed from side, not shaped like arrowhead; BP not very narrow, not strongly sclerotised, not hooded, usually in two pieces and not strongly emarginated along anterior margin.

Female. Macropterous and observed in flight in all species. Pronotum lacking irregularities in posterolateral areas; punctures moderate to dense, pronotum> humeral width; lacking indentation of lateral margin, and irregularities at posterolateral corner. Elytral punctures not as large as pronotal ones nor evenly spaced. No legs or parts thereof swollen and/or curved. LO in V 6 only, lacking any elevations or depressions or ridges on V 7. Bursa where investigated with narrow paired plates, and median oviduct with large irregular plate in leii   .

Larva. Aquatic. Eight pairs of gills arising from the laterotergites of abdominal segments 1–8; elongate, slender, tapering a little in front and behind, and somewhat flattened; lacking laterally explanate tergal margins thus laterotergites and gills visible from above. With three thoracic and nine obvious abdominal segments (a tenth may be represented by a narrow ring of cuticle following segment nine). Dorsally paired hardened plates surrounded by pale membranous areas on all but terminal segment; punctation on dorsal plates evenly spread over entire surface; a narrow median line runs from the anterior margin of thoracic tergum 2 to the posterior margin of abdominal tergum 7. Head with mandibles lacking inner teeth; both terminal segment of antenna and adjacent sense cone elongate slender. Protergum with slightly rounded anterior and posterior margins, lateral margins straight and diverging slightly posteriorly, all corners rounded; no median line. Thoracic terga 2, 3 with narrow to wide median line, corners rounded and lateral margins in anterior 1 / 3 converging; thoracic terga 2, 3 subequal in length, at least tergum 2 longer than abdominal terga. Abdominal terga 1–8 of similar form to that of thoracic terga 2, 3, with well defined narrow to very wide median line, but diminishing slightly in both length and width towards tail; abdominal tergum nine lacking median line, lateral margins converging anteriorly, posterior margin rounded as are posterolateral corners. Ventrally a lateral pleural suture delimits laterotergites above in the thorax and abdomen; transverse subdivisions of the meso and metathorax being part of the sternal area, and each of these segments bearing paired laterotergites with the anterior pair in the mesothorax bearing spiracles; the ventral area of abdominal segments one to seven with a median subrectangular sternal area, margined by elongate narrow paired and pigmented laterosternites, delimited by folds from both the laterotergites above and the median sternal plate below; segments one to eight have single laterotergites at each side, and from these plates arise the gills on segments 1–8. Tracheal gills are fork-shaped and compound. A spiracle is located at the tip of the shorter branch of each. First instar larvae have tracheal gills only. Aquatic larvae with 10 pairs of similar pale white, forked eversible organs located laterally on the meso- and metathorax and above the tracheal gills on each of the 8 abdominal segments. On the external surfaces of the larval eversible organs, numerous flower-shaped protuberances discovered, similar in shape but with different numbers of apical spines, and protuberances with different apical spine number appearing in the same eversible organ.

Etymology. Aquatica   , latinised from the English word aquatic, is a feminine noun and the name reflects the environment in which the larvae are found.

Remarks. Aquatica   gen. n. is a SE Asian genus with representatives from mainland and offshore China ( Taiwan) and Japan, and is distinguished most obviously by its larval aquatic habitat with lateral abdominal gills. Branham and Wenzel (2001, 2003) separated lateralis   from L. cruciata   and indicated they interpreted the adult male light organ of lateralis   as being a ‘center strip’ (page 13). It is probably more correctly interpreted as a basal strip as the light organ is continuous across the base of V 7 and retracted from the apex, so that up to half of the posterior area may be devoid of light organ. 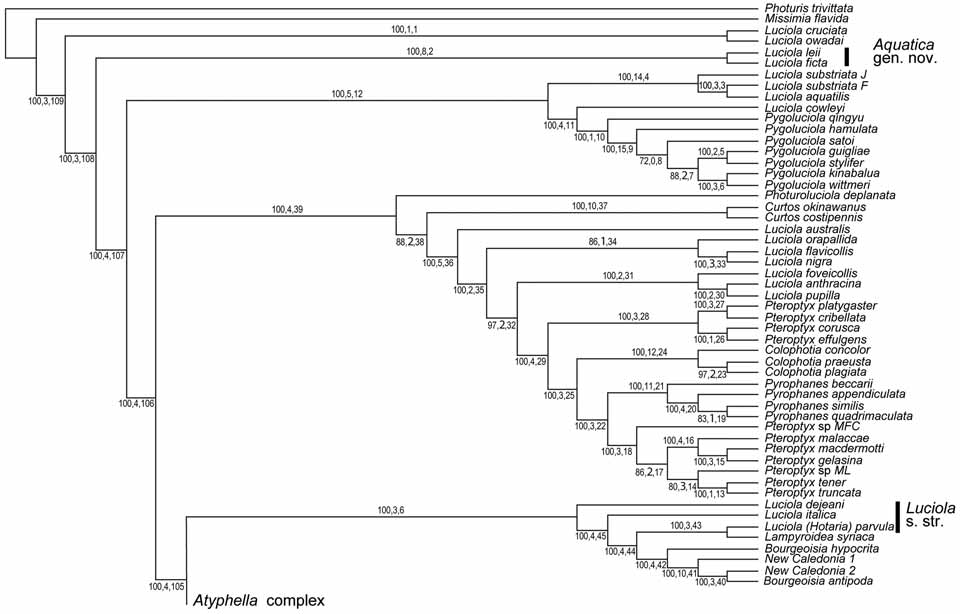