Description. Morphometric and meristic details are given in Table 1; following data summary is provided for holotype, followed by those of paratype, if different, in parentheses.

Etymology. The specific name africanus  refers to the regional locality of the types, and its decorated color pattern is reminiscent of some strikingly coloured African animals, such as the giraffe.

Remarks. Chaunax africanus  n. sp. can be distinguished from other members of the C. fimbriatus  -species group by its unique dorsal coloration. It is morphologically most similar to C. nebulosus  and C. reticulatus  , but differs mainly in having long, deep-brown bars on its body surface (vs. dark bars absent). It also differs from C. fimbriatus  , as does C. nebulosus  , mainly in lacking two large white spots on the dorsal surface, and having 6 neuromasts in the infraorbital series (CD) and 3 in the lower preopercular series (DG) (vs. 7 and 4 respectively); and from C. umbrinus  in lacking a fine reticulate colour pattern and having 10–12 neuromasts in the pectoral series and 31–32 on the body proper (vs. 13 and 33–38, respectively).

Comments on members of the C. fimbriatus  -species group. There are presently six species recognized in the C. fimbriatus  -species group: C. fimbriatus  , C. umbrinus  , C. flammeus  , C. reticulatus  , C. nebulosus  n. sp. and C. africanus  n. sp. These species can be distinguished from all other members in the genus in having cirri present on the dorsal head (including a dense cluster above the eye), 3 or more (usually more) pairs of spines bridging the neuromasts, and, if present, a complex pattern of spots or reticulations on the dorsal surface.

Of the group, C. flammeus  probably is the most poorly known nominal species, represented conclusively only by the unique holotype collected off northern Madagascar in the western Indian Ocean. Le Danios (1979) mentioned that the holotype had yellowish spots when fresh, which faded totally after preservation. Other species in C. fimbriatus- group retain a grayish or brownish color pattern dorsally, even after long-term preservation. Chaunax flammeus  seems to be either plain reddish or with yellowish spots when fresh, distinguishing it from all other members of the fimbriatus  -group.

Chaunax umbrinus  is also poorly known, represented only by a few specimens collected from the Hawaiian Islands and the Emperor Seamount (based on specimens deposited in the National Science Museum, Tokyo). It can be distinguished mainly by its very fine reticulate pattern on the dorsal surface, even in large individuals. Other characters that might be used to distinguished it from its congeners in the C. fimbriatus  group are mainly 13 neuromasts in the pectoral series (vs. 12 or less in its congeners) and slightly more numerous neuromasts on the body proper (33–38, vs. 29–37 in its congeners).

Chaunax fimbriatus  is commonly collected from the seas around Japan and Taiwan, but has not been reliably reported from outside this part of the western North Pacific. The first author regularly collected this species from northern Taiwan, but only one specimen has been confirmed in the past 15 years from off southwestern Taiwan (off Tungkang). This species may inhabit the East China Sea and/or the Okinawa Trough, but rarely occurs in the South China Sea. Chaunax fimbriatus  can be distinguished from its congeners mainly by the two large pale patches on its dorsal surface, one associated with the embedded third dorsal spine and another before the origin of the soft dorsal fin, and mainly 4 neuromasts in the lower preopercular series (vs. mainly 3 in other congeners). Record of this species from Hawaii (Chave & Mundy 1994 is misidentification of Chaunacops cf. coloratus  and those of Mundy 2005), the western central Pacific (Caruso 1999), Australia (Paxton et al. 1989), and New Caledonia (Fricke et al. 2011), are most likely invalid and need to be checked.

Chaunax reticulatus  ( Fig. 3View FIGURE 3) was described from New Zealand, New Caledonia and eastern Australia. It differs from congeners mainly by the pale reticulate pattern on a grayish background in juveniles, and fine brownish spots on its dorsal surface in adults.

Chaunax apus  ( Fig. 6View FIGURE 6) was described based on a single specimen collected from the Bay of Bengal. Only a few species had been described before this species, C. pictus  , Chaunax nuttingi Garman 1896  (= C. pictus  ), C. fimbriatus  and C. umbrinus  . The first author examined the holotype of C. apus  and determinated that it belongs to the C. abei  -species group (sensu Ho & Shao 2010), which is characterized by its lack of filaments on the dorsal surface of the head and flap-like cirri laterally on the body associated with the lateral line. As C. pictus  is in the C. pictus  -species group (sensu Caruso, 1989) and both C. fimbriatus  and C. umbrinus  are in the C. fimbriatus  -species group (sensu Ho et al., 2013, not Caruso, 1989), none of the three is conspecific with C. apus  . Le Danios (1979) suggested that C. apus  was a junior synonym of C. endeavouri Whitley 1929  , an impossibility as C. apus  was described before C. endeavouri  . We provisionally recognize C. apus  as a valid species in the C. abei  -species group but caution that it needs further study.

Although C. pictus  has been recorded globally, confirmed identifications are only known from the Atlantic Ocean (Caruso, 1989) and Mediterranean Sea (Ragonese & Giusto, 2005); we have seen no specimens from outside the Atlantic Ocean among the substantial amount of material we examined. Based on our observations, records of C. pictus  from outside the Atlantic Ocean are likely to be misidentifications of various species, notably C. nudiventer  ( New Zealand; Ho et al. 2013), C. abei  ( Japan and Taiwan), and some unidentified/undescribed species in Australia and South Africa (Ho, pers. observ.).

Le Danios (1979) described C. umbrinus flammeus  based on a single specimen collected from northern Madagascar. Examination of the holotype and the original drawing show that it is clearly a member of C. fimbriatus  -species group (sensu Ho et al., 2013). Its unique coloration indicates that it should be treated as a valid species distinct from the three other nominal species of the complex (i.e. C. fimbriatus  , C. umbrinus  and C. reticulatus  ), and two new Indian Ocean species described herein.

Although Fricke (1999) recorded C. umbrinus  from Reunion Island, western Indian Ocean, no vouchers were indicated. He most likely confused Le Danios’ (1979) C. umbrinus flammeus  with C. umbrinus  , a species now considered to be endemic to the Hawaiian region.

Hutchins (2001) recorded C. cf. fimbriatus  from Western Australia but his species is most likely C. nebulosus  , described in the present study.

Chaunax penicillatus  was recorded from eastern Africa by Smith in Smith & Heemstra (1986). The vouchers were examined by the first author and the presence of this species in the Indian Ocean is confirmed. Additional specimens collected off Western Australia (deposited in AMS, NMV and CSIRO) and India (deposited in Cochin Unit, National Bureau of Fish Genetic Resources and Centre for Marine Living Resources & Ecology) were also examined by the first author.

Specimens of Chaunax russatus  Ho et al., 2013, collected from the western Indian Ocean, are also recognized in this study and the species is now thought to exhibit a trans-Indian Ocean distribution. 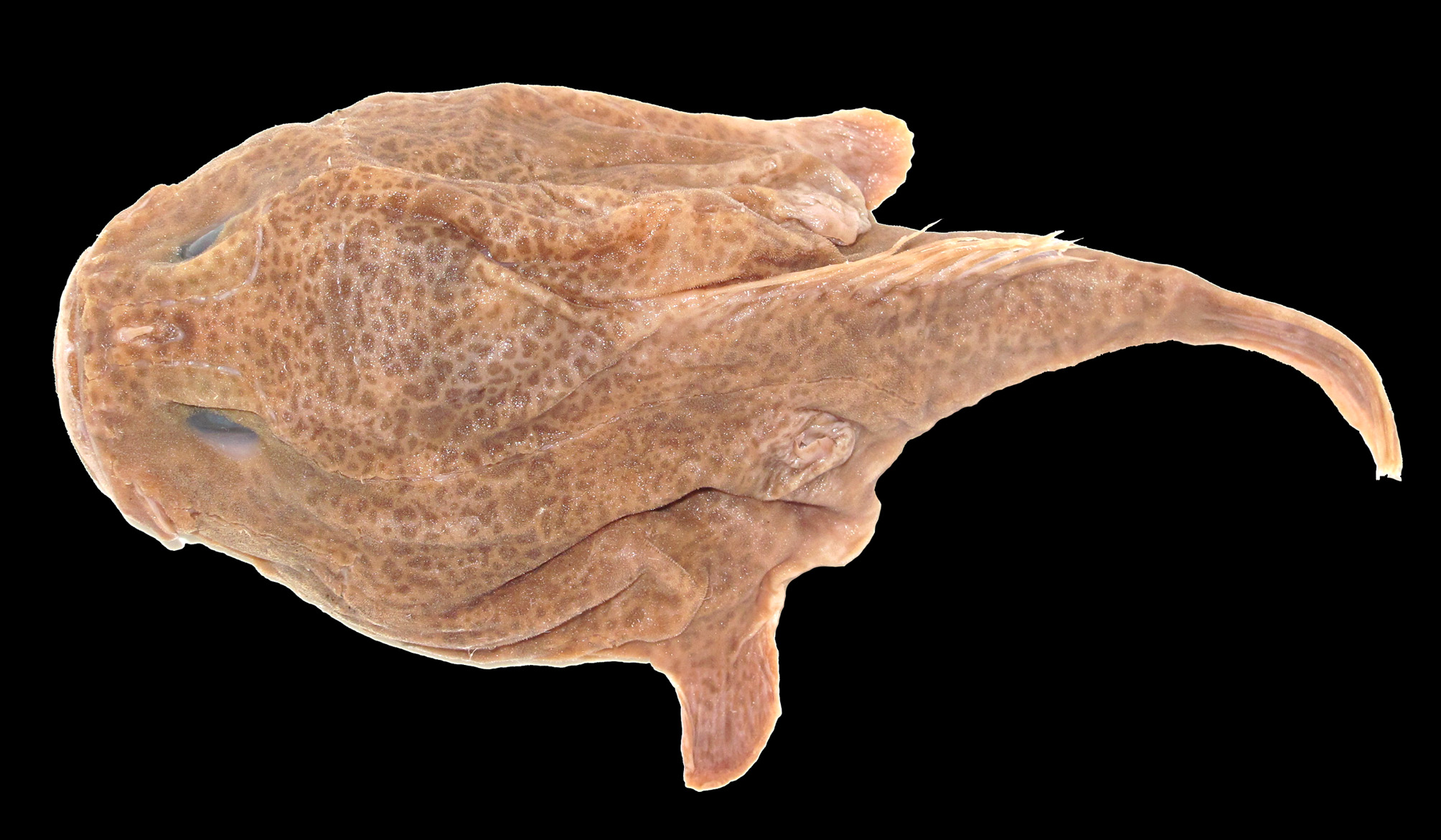 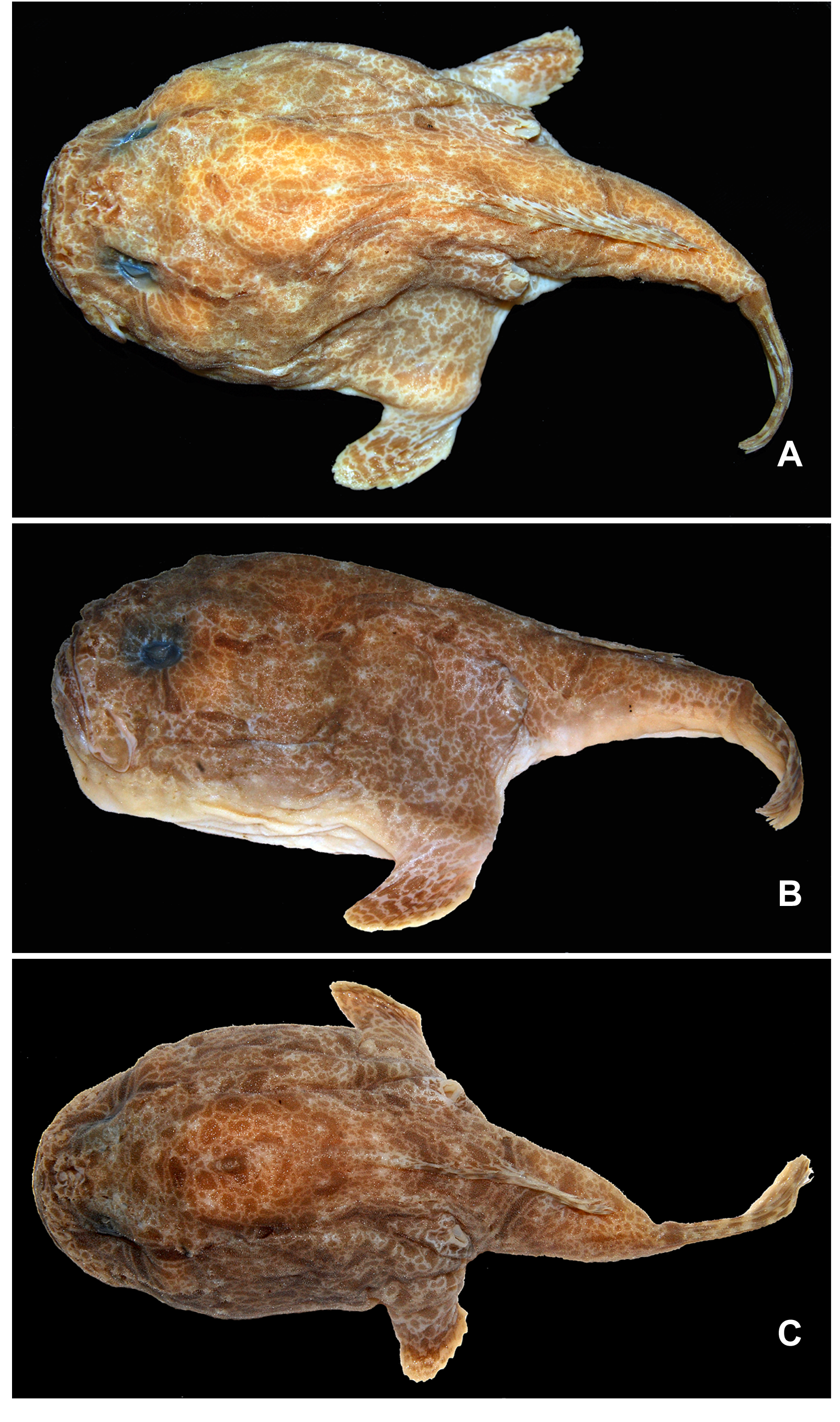