A rough definition of the subgenus Megaphyllum  s.str. was given by Lazányi et al. (2012) on the basis of previous publications (Verhoeff 1894 d, Attems 1927); prior to that it had never been defined under the subgenus name Megaphyllum  . Verhoeff (1896 a, 1896 b) focused on gonopod structure, occasionally supplemented with other characters of the head, eye, repugnatorial glands, and form and setation of telson (Verhoeff 1930).

Diagnosis. A subgenus of the genus Megaphyllum  with considerably broader promere than opisthomere, tightly “embracing” the latter antero-laterally, with an oblique riffle on its caudal surface. Opisthomere always with a well-developed posterior process, joining the main opisthomere body at an acute angle; usually with an anterior process, this being vestigial or fully absent in some species; solenomere with two distinct processes—posterior and anterior, the latter positioned at the end of the flagellum-conducting lamella. Vulvae subcylindrical, with an oval, mostly apically positioned opening; operculum shorter than bursa.

Males: Gnathal lobe well-developed. First leg-pair in the form of a simple hook (Fig. 6 l). Penis flattened from antero-posteriad, apically with very short lobes and with two small, wide, (usually) rounded lamellae running parallel (ll for left and rl for right lamella) and pointing posteriad in some species—these lamellae sometimes not visible. Penis occasionally bent along its longitudinal axis (e.g. in M. montivagum (Verhoeff, 1901)  , see Figs 11 f and 11 fView FIGURES 11 a – g *). Second pair of legs with two pads on postfemur and tibia (pf and t, respectively), coxa simple, without hump (Fig. 6 n). All subsequent legs with three pads on femur (f), postfemur (pf) and tibia (t) (Fig. 6m). Pads on postfemur and tibia sometimes rippled (as if additional pads would exist on the same article) (see pf on Fig. 6m), or with vestigial proximal parts (i.e. only the distal part visible). Tarsus of midbody legs shorter than tibia: (tarsus/ tibia)= 0.65–0.9, although an unusual individual with ratio 1.15 was also found. 7 th pleurotergum protruding like a simple shovel on the border of pro- and metazonum.

All species groups with a basic arrangement of opisthomere parts ( Figs 1 b – 1 eView FIGURES 1 a – e), while shape of opisthomere parts different within the actual species groups. Basically ( Fig. 1 aView FIGURES 1 a – e): opisthomere with a well-developed posterior process (pp) in every species group—most likely this was called “ Paracoxit ” or “ Coxalfortsatz ” (i.e. coxal process) by Attems (1927 and 1940, respectively) and all the other parts of the opisthomere were probably gathered under the name “Telopodit” (Attems 1927: fig. 287.). Opisthomere usually also with an anterior process or anterior ridge in same position (ap). Occasionally the apical part of the opisthomere is in the form of a hump around the solenomere, around the end of the flagellum-conducting lamella, posteriorly and/or anteriorly variably developed (ah for anterior hump and ph for posterior hump)—probably this hump was called “ Polster ” (i.e. pillow or pad, see e.g. Attems 1927, 1940). Solenomere always with an anterior and a posterior process (asp and psp) displaying several shapes and a great variation in length within species groups and species; sometimes even intraspecifically. Anterior solenomere process tubular (see Figs 9–11 dView FIGURES 9 a – gView FIGURES 10 a – gView FIGURES 11 a – g, 15 dView FIGURES 15 a – g)—this may be the sperm channel, i.e. “ Spermarinne ” by Lohmander (1936, p. 107) while the opening for the flagellum is basal to the anterior solenomere process (see Figs 6 p, 8 d). 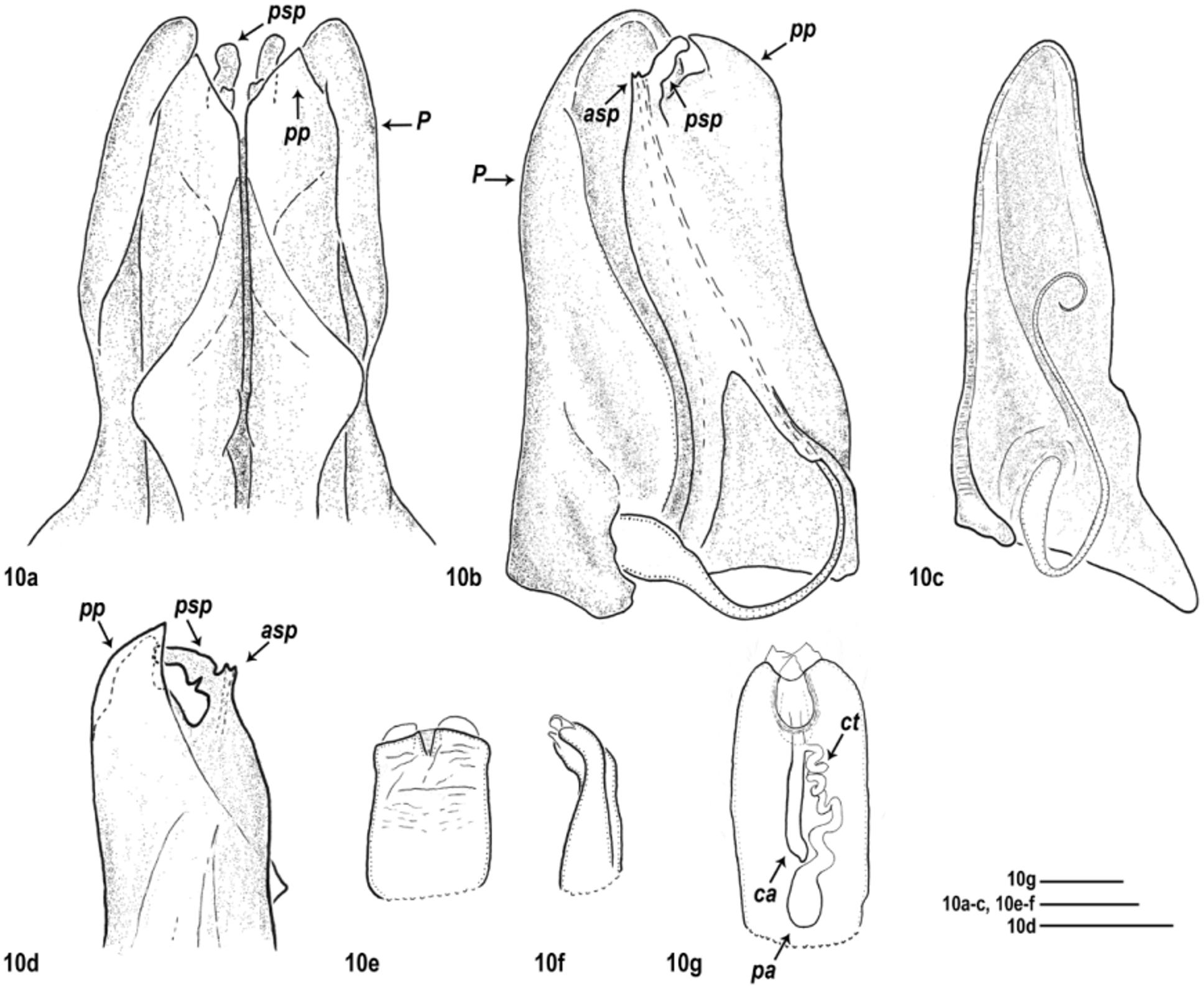 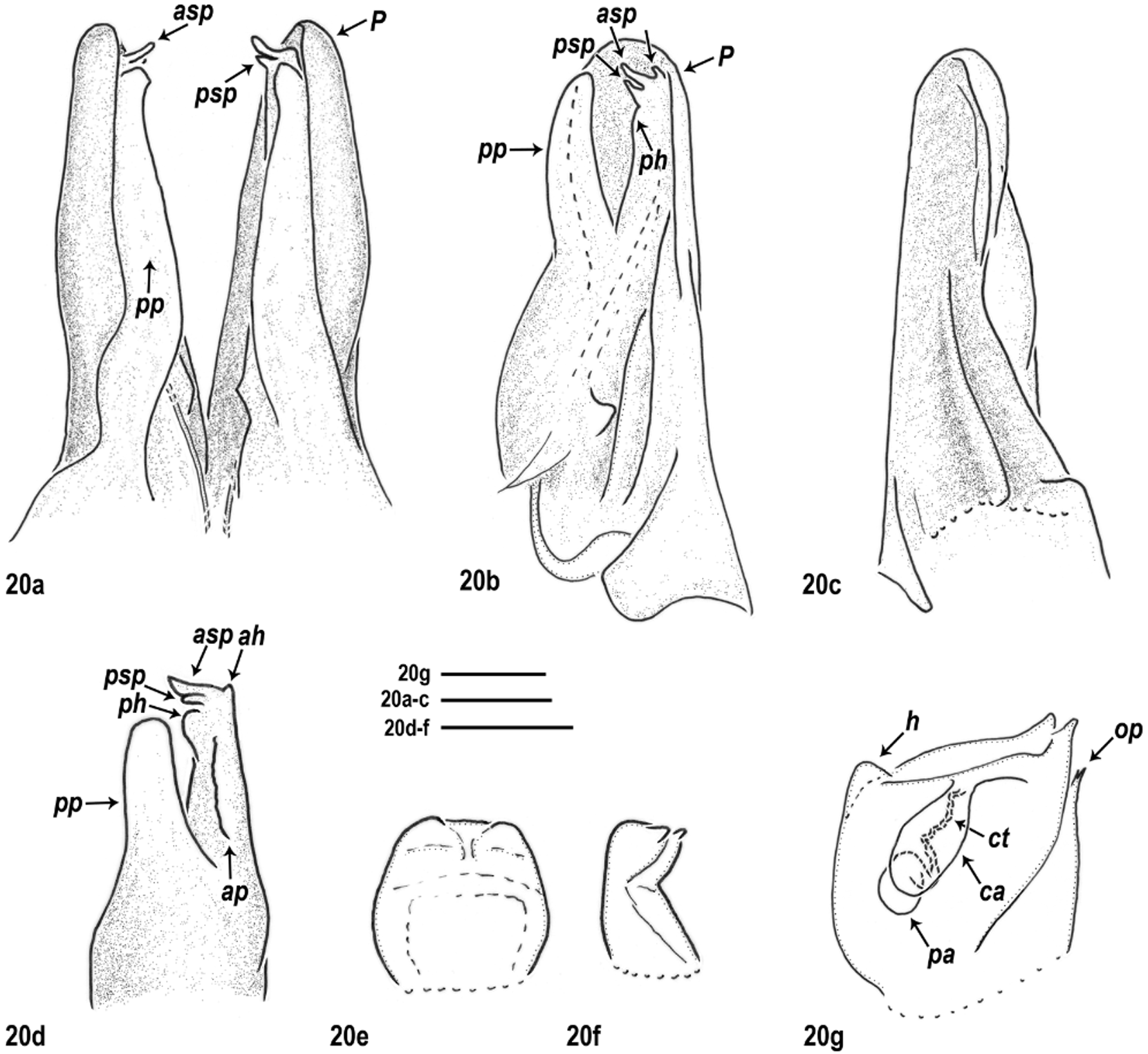