Sympycnus desoutteri ( Figs 20–22 View FIGURES 20 – 22 ): LECTOTYPE (here designated in order to fix identity of the species), ♂, [ FRANCE], labelled: [white] “[Dept. Manche (Normandy)] F[erman]ville” / “ 8.[19] 33 ”; [white] “ Symp. Des -“ / “ Souteri Par.”; [red] “ lectotype des. Marc” / “Pollet, 2015 ”; [white] “ Sympycnus desoutteri ” / “ Parent, 1925 ”. PARALECTOTYPE: ♀, [ FRANCE], labelled: [white] “[Dept. Manche (Normandy)] Cotentin [Peninsula]” / “[19] 28 ”; [red] “ paralectotype des. Marc” / “Pollet, 2015 ”; [white] “ Sympycnus desoutteri ” / “ Parent, 1925 ” (both MNHN (coll. Parent)). Notes on synonymy. Without designating a holotype or allotype, Parent described S. desoutteri in 1925 on the basis of a couple (male + female), collected in Fermanville (Normandy, France). In his collection, a large number of specimens from Fermanville were present, but only with 1929 and 1933 as label dates (together with a large number of specimens lacking any label). Moreover, none of the females of the Fermanville series were separately pinned. Type specimens could thus not be detected, and the lectotype and paralectotype were selected among the Parent specimens based on their conservation status and the fact that they were separately pinned. Both specimens are in a good state; in the paralectotype, only the apex of both wings is slightly damaged and tarsomeres III 3-5 of the left hind leg are missing.

Remarks. Types of S. desoutteri were not designated in the original description ( Parent, 1925), but the concept of this species sensu Parent could be easily established thanks to the large number of specimens in his collection from the Manche Department ( France), including the type locality (Fermanville). Specimens mounted on micropins were often put together on one piece of styrofoam and individual pieces contain up to 13 specimens. Surprisingly, Parent consistently misspelled the name of his new species as “ Dessouteri ” on the identification labels, while his fellow-collector in the Vallée des Moulins was Dr “Desoutter” ( Parent, 1925).

Due to its size, the historical Parent collection ( MNHN) of S. desoutteri enabled us to gather quantifiable information on some morphological features. All specimens most probably originated from sites in the Manche Department (Normandy), although 38 of the 252 specimens did not carry any label. Only two out of 122 male specimens showed a slightly longer postpedicel (1.1 x as long as wide) whereas in the other specimens it was about as long as wide; in all those specimens the postpedicel had an acute apex. The lectotype specimen, indeed, features a slightly shorter postpedicel (0.9 x as long as wide) with a blunt apex, but no other differences with the other specimens were detected. The external bristle of the hind coxa is mostly white in the male of this and the other species, and black in the female (also reported by Lundbeck 1912), but exceptions were found in the Parent collection as well. Of 67 males, only one showed a black bristle instead of the normal white one, whereas among 28 females, 19 had a black bristle (at each side), 6 had two brown bristles, 2 had two white bristles and one specimen even showed one black coxal bristle at one side and a white coxal bristle at the other side. Neither the shape/length of the postpedicel nor the hind coxal bristle colour in the females seem reliable for identification.

The single Californian record ( Pollet et al. 2004) of S. pulicarius proved correct and is based on six specimens. If the current seemingly disjunct distribution is reliable, then its occurrence in California might be explained by human introduction. However, the species has been reported from eastern Russia (Altai) and possibly occurs also in the Far East of Russia and Japan, but has not yet been collected there. 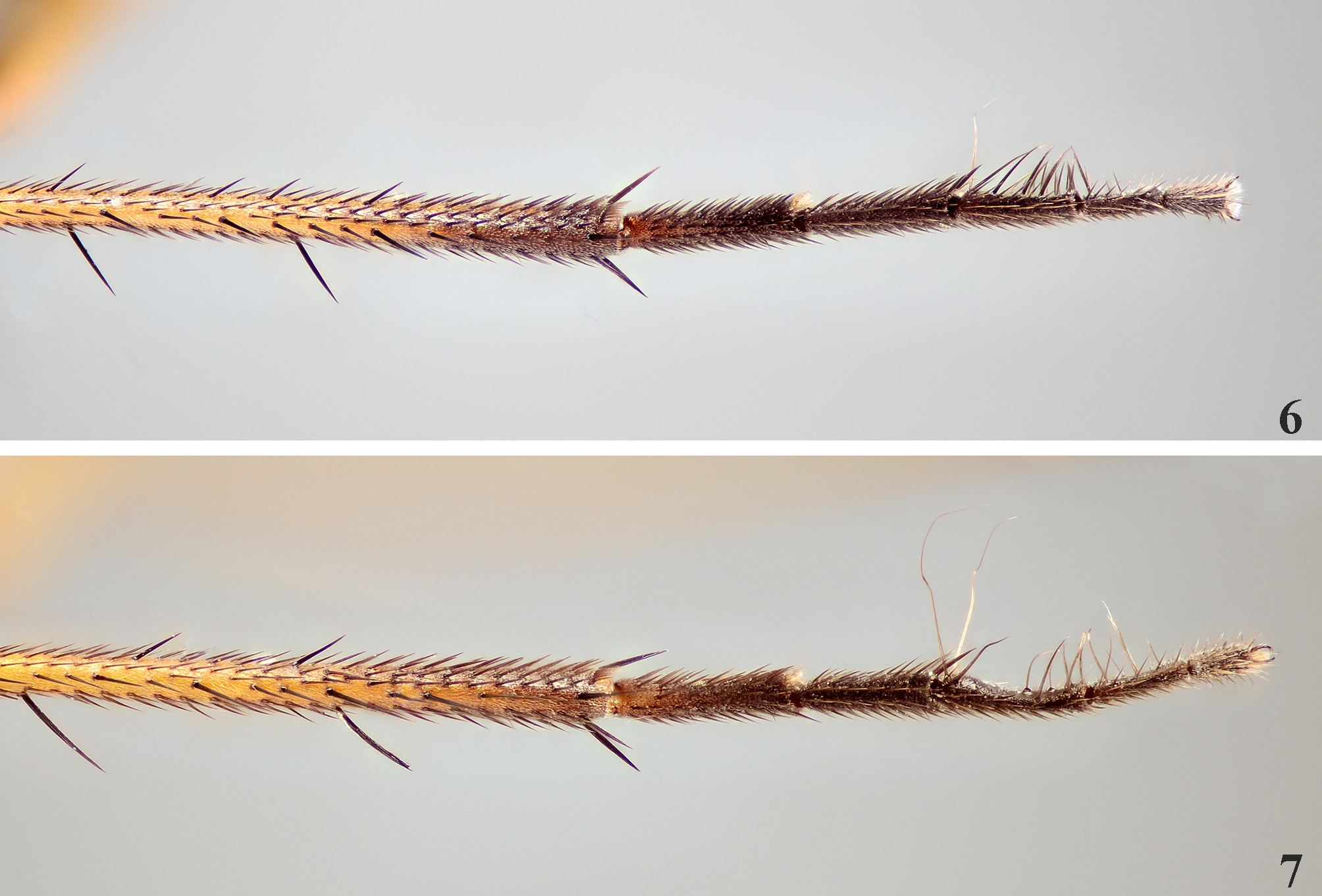