Note: The Lectotype designated here is a male specimen from Vachal’s collection in MNHN, labelled with the type locality and a date “ 12 v ” which not exactly matches that mentioned in the original description by Vachal (1907): “Trois ♂, d’Adana, 7-V ”. Other putative syntypes are unknown. For this reason, and because original types by Vachal typically were not marked with type labels ( Rasmussen 2012), D. B. Baker labeled this specimen as Neotype rather than Lectotype in 1990 but has not published his Neotype designation. It is however very unlikely that two independent series of specimens from the same locality and nearly the same date were deposited in Vachal’s collection and that one series was ignored in the species description. It is thus assumed here that this specimen is part of the original type series and that Vachal has made a mistake when reading the label. The Lectotype was examined via photographs including the dissected genitalia and S7 that despite being incomplete are diagnostic of E. aequata  (see Acknowledgements).

Pollen plants: Based on analyses of scopal pollen contents of seven females that were available for study this species is either mesolectic on Boraginaceae  and Fabaceae  , or polylectic with preference to Boraginaceae  . Six females that were collected in Israel and in Cyprus collected exclusively or mainly Echium- type pollen ( Boraginaceae  ) with a small amount (up to 6.2%) of Fabaceae  pollen. A seventh female that was collected on Echium angustifolium  in Israel had a mixed load with mainly pollen of the Vicia  - type ( Fabaceae  ) and 18% pollen of the Echium  - type. Floral records of females and males include Alkanna tinctoria  , Anchusa undulata  , and Echium angustifolium  (all Boraginaceae  ).

Diagnosis: This species is easily differentiated in the female sex from E. wattsi  sp. nov. by the combination of its larger size and lighter vestiture: the upper mesepisternum being light, greyish fulvous comparing to bright ferruginous in fresh specimens of the latter (compare Figs 4 and 6View FIGURES 1–12, respectively), and the apical fascia are lighter as mentioned in the key. The females further differentiate from those of the two other species by their smooth, almost impunctate scutellum ( Fig. 21View FIGURES 21–29) and marginal zone of T1 ( Fig. 24View FIGURES 21–29), and by the complete apical fascia of T3 that hide the tergite margin in fresh specimens (although this character cannot be evaluated without fresh specimens) ( Fig. 24View FIGURES 21–29) as indicated in the key. Finally, females are usually easily separated from those of the equally large E. dafnii  sp. nov. by the more densely punctate mesonotum (compare Figs 21 and 22View FIGURES 21–29, respectively); in some female specimens of E. aequata  a small area posteromedially on the mesonotum is more sparsely punctate with smooth puncture interspaces, but this area is never as conspicuous and almost impunctate as in E. dafnii  sp. nov.. Males can be differentiated by the characteristics mentioned in the key.

Description: Female: body length 14–16 mm; forewing length 9–10 mm; head 1.25 times broader than long on average; inner margins of compound eye weakly diverging below, such that ratio of upper to lower interocular distance equals 1.09 ( Fig. 13View FIGURES 13–20); vertex short, ocelloccipital distance about equal to lateral ocellus diameter; clypeus protuberant, produced in front of anterior tangent of compound eye by between 2/3 and full eye width in profile; galea long, 1.8 times as long as compound eye in profile; maxillary palpus about as long as mandible width at base; clypeoocular distance moderately long, about as long as malar distance and about 1/3 as long as mandible width at base; malar area nonlinear, distance from upper mandibular articulation to compound eye greater than distance from lower mandibular articulation. 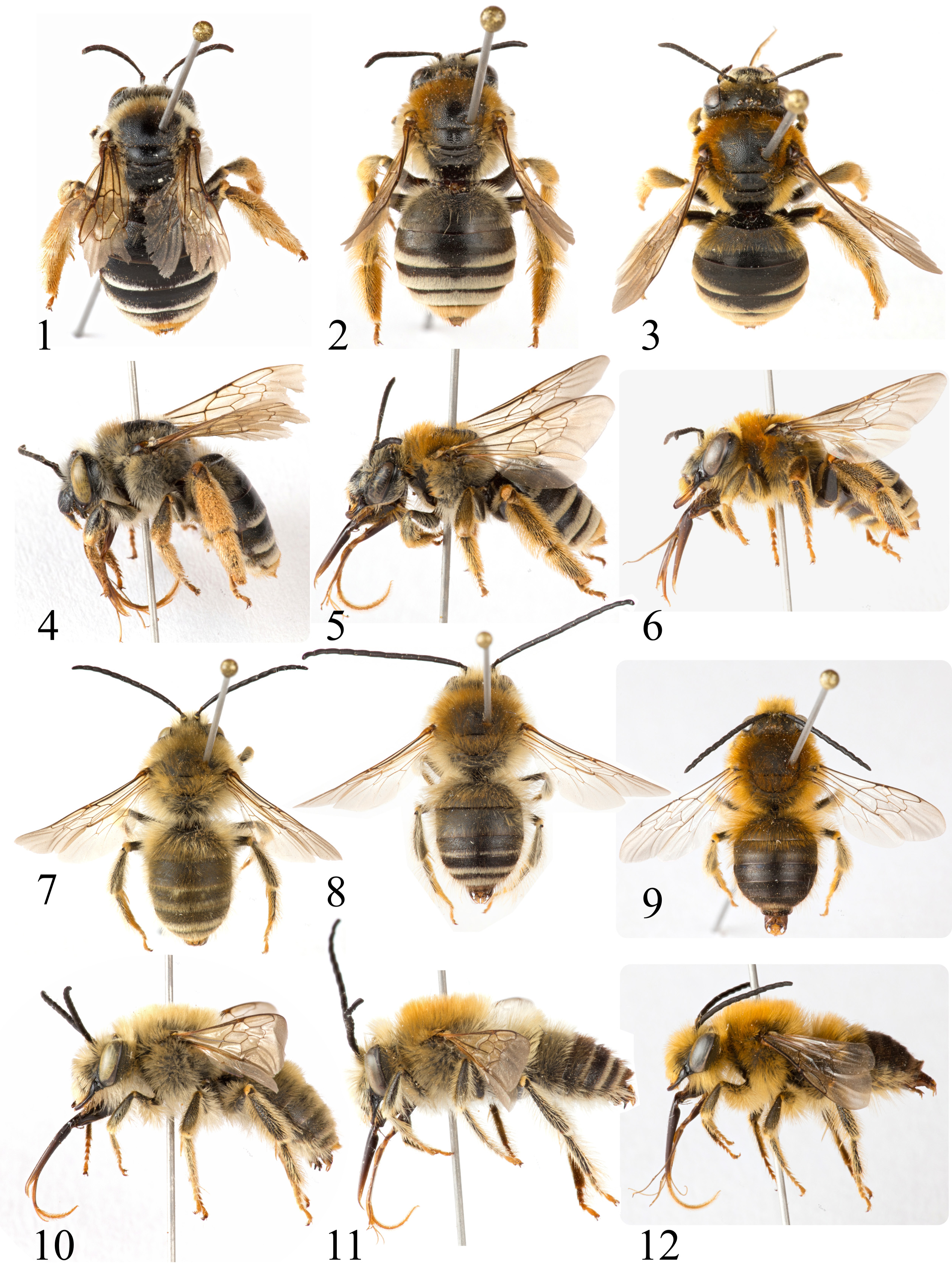 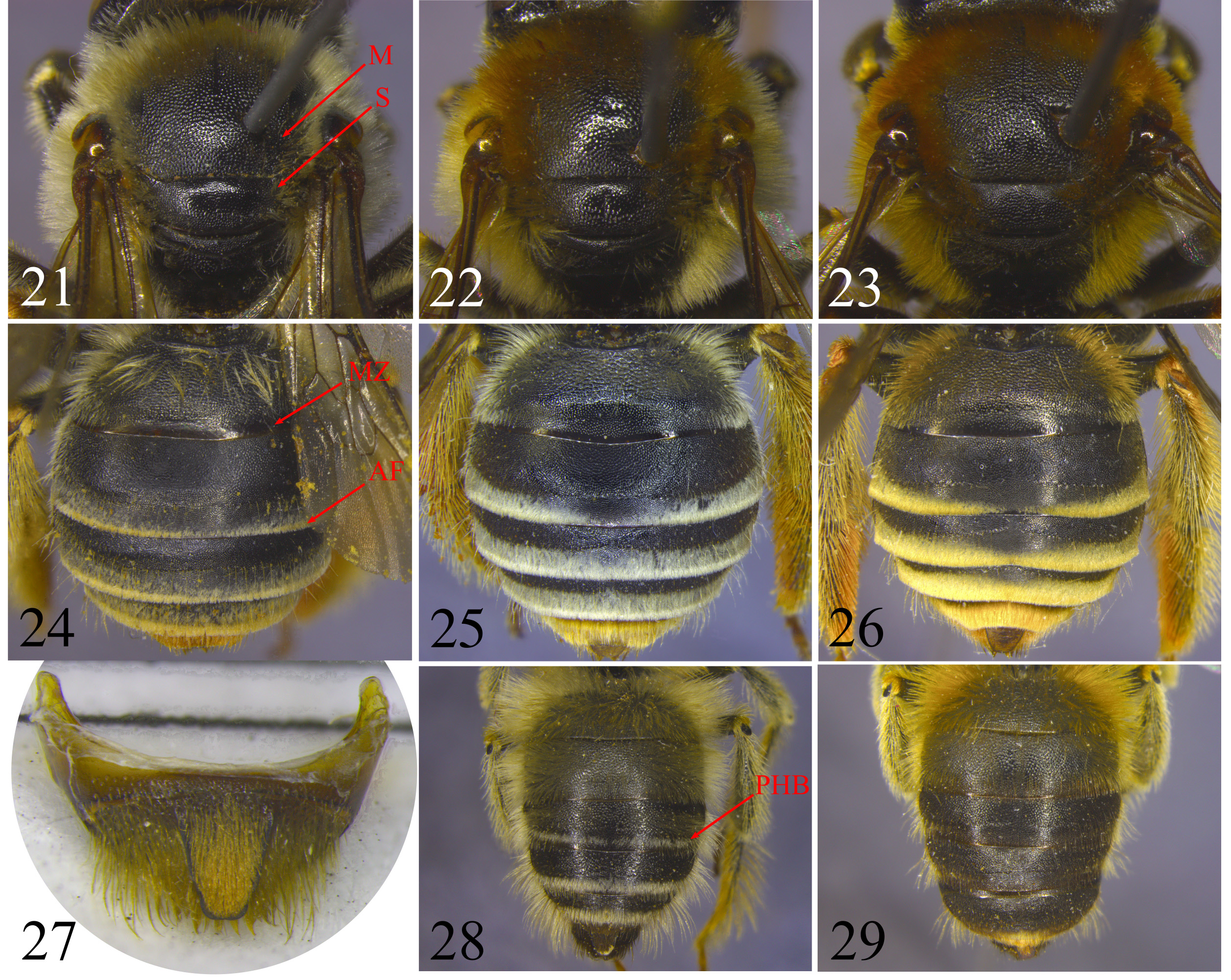