Etymology. The name philornisae  refers to the generic name of the known host, Philornis  .

Head somewhat narrower (0.92×) than mesosoma, 2.21× as wide as long and 1.25× as wide as high. Left mandible with 2 teeth, the right with 3 teeth; teeth sharp, lower one the largest, median one not much shorter than the upper; surface of mandibles strongly depressed near base, mesal surface punctured, rugulose and densely setose. Labrum semi elliptic, faintly alutaceous, with marginal fringe and a few hairs centrally. Clypeus subtriangular, receding on a narrow ventral stripe, its upper margin below lower ocular line, smooth except for piliferous punctures—7 large punctures mostly in a dorsal row and 4 smaller punctures ventrally ( Fig. 6View FIGURE 6 B, C). Lower face except between subtorular swellings and gena densely setose, punctulate-rugulose, the setae thin, about as long as the shorter distance between antennal scrobes and clypeus ( Fig. 6View FIGURE 6 A, B). Subtorular swellings converging to each other and tapering ventrally ( Fig. 6View FIGURE 6 B). Adtorular ridge vestigial and incomplete, visible only in certain light ( Fig. 6View FIGURE 6 C). Oral fossa 2.38× length of malar space. Malar grove present but narrow, underlined below lower edge of eye by an adjacent swelling, continuing as postorbital carina and hence delimiting a long and deep postorbital grove which is ventrally crenulate-punctulate and with 1–4 imbricate rows of setae oriented downwards ( Fig. 6View FIGURE 6 A).

Carina bordering gena concave in lateral view, leaving the postgena partly visible ( Fig. 6View FIGURE 6 A). Eyes large, separated by 0.89× their own height, completely bare. Interantennal projection compressed and with 21 setae. Antennal scrobes large, 1.27× as high as broad, and reaching lower margin of median ocellus. Adscrobal stripe and frontovertex punctured, the former with 3 rows of setae directed downwards. Preorbital carinae merging near twothirds of antennal scrobes height, blunt along eyes, continuing on vertex where sharper and together forming an inverted U-like ornamentation ( Fig. 5View FIGURE 5 A). Ocelli large, about same size, the median ocellus separated from lateral ocellus by about own diameter. Setae on either side of median ocellus directed upwards. Lateral ocellus with small fovea along outer side. Median ocellus diameter 2.6× OOL. Occiput strongly sloping, setae adpressed and directed outwards. Temples not progressively merging to occiput but forming a right angle with it ( Fig. 5View FIGURE 5 A). Genal carina continuing upwards behind eyes.

Variation and comments (Table 3, Fig. 7View FIGURE 7 G). Most of observed variation involves the size of the paratypes TRMO T25 #1 and #2, which are distinctly smaller. This smaller size affects the dimensions of their different parts, but apparently in the same proportions, as the calculated ratios are within the range of variation of the other specimens (Table 4). The small size partly affects the number of setae on the basal fold. Some paratypes exhibit a visible unpunctured median stripe on the center of mesoscutellum. The dissection of paratype TRMO #10 showed that the metepisternum (= ventral shelf of metapleuron) is entirely black except for a brownish ridge of the petiolar foramen.

Male. The two males reared are about the same size as the two females TRMO T25. The only informative character of this sex, the special setation on the ventral side of the flagellum, was not visible because of their fairly poor condition.

Recognition. B. philornisae  is readily separated from B. subconica  by the antennal scrobes reaching the lower edge of the median ocellus, the much shorter ocellar ocular distance, stouter mesosoma, less densely setose basal fold, and relatively longer gaster. The last two states also distinguish it from Brachymeria  'Brassolis'. It is separated from B. subrugosa  and B. costalimai  by the denser setation on its gena, lower face and supracoxal stripe of the metepimeron, the ornamentation of the clypeus, the thin and vestigial adscrobal carina, and incomplete black ring on the mesotibia. It is also distinguished from the former species by the antennal scrobes being shorter than eye height. It differs from B. costalimai  by the reduced orange parts on the ventral side of the mesosoma, especially the upper half of epicnemium. 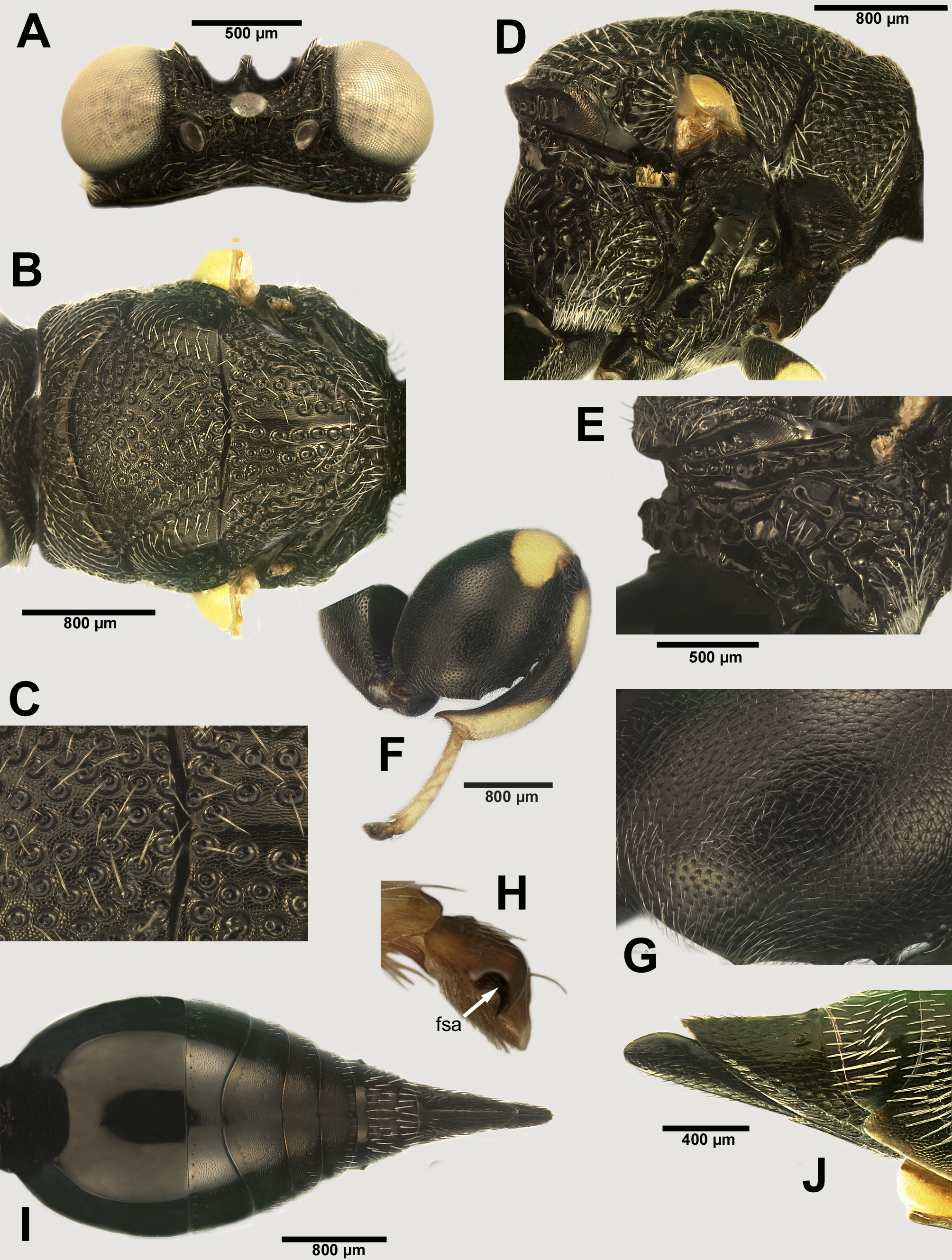 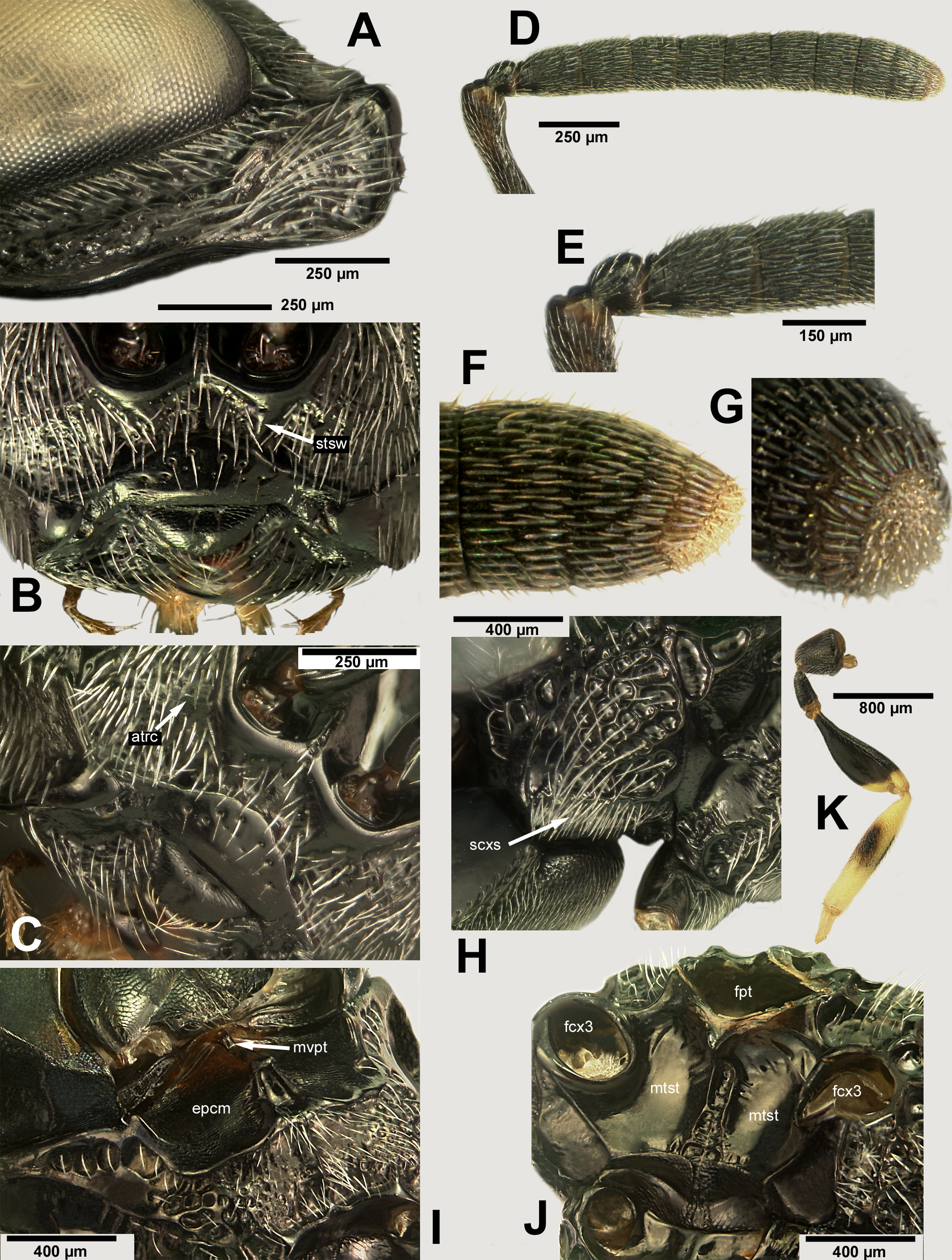 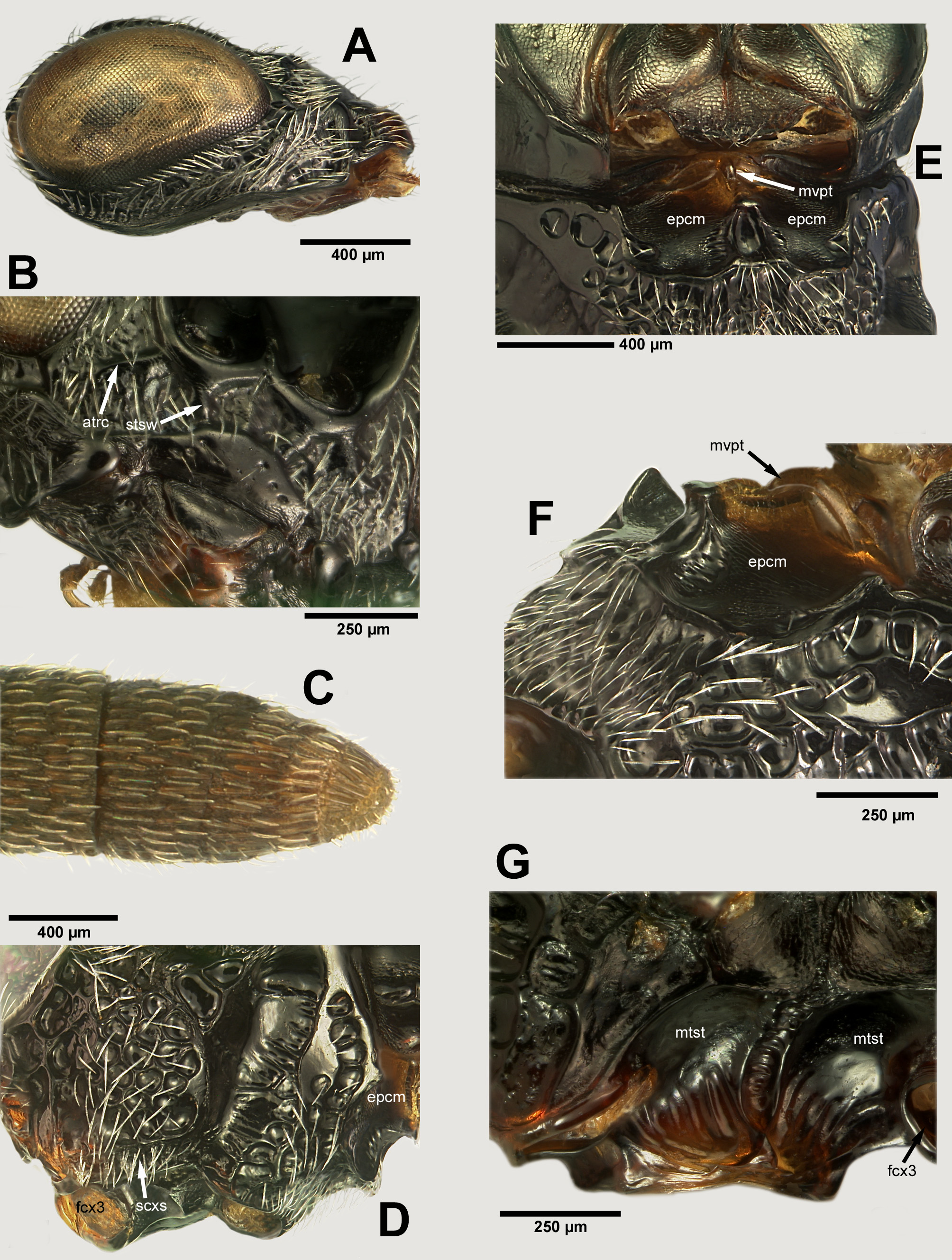