Prevalence of infection and distribution ― 80% (four of five spiral intestines), seeming to be restricted to the Atlantic coast of Colombia.

Remarks. The original description of Rhinebothrium tetralobatum  was based on six specimens and did not include information on tegumental structures (i.e., microtriches). In addition, we also detected some discrepancies between the original description and re-examination of the type series. Brooks (1977) reported R. tetralobatum  as being 15–30 mm in length, with a genital pore position between 44 and 48% from anterior end of proglottid and an ovary measuring 198–300 in length. These accounts differ from our measurements of the type series (i.e., 5.4–9.7 mm, 23–33%, and 86–159, respectively). Furthermore, the examination of additional material shows that R. tetralobatum  ranges from 4.1 to 19.0 mm in length, possesses genital pores that are located 18 to 33% from the anterior end, and that the ovary is 68–348 in length ( Table 1). Also, Brooks (1977) reported the presence of a cephalic peduncle, which was not seen in either the newly collected specimens, or the type series, and described the worms as apolytic rather than euapolytic (sensu Caira et al. 1999).

Rhinebothrium ditesticulum  and R. fulbrighti  most closely resemble R. tetralobatum  in their total length (9.6– 28.7 and 3.1–18.0 mm vs. 4.1–19.0, respectively) and the number of proglottids (160–276 and 40–168 vs. 80–206, respectively). Besides the slightly overlap, R. fulbrighti  possesses fewer bothridial loculi in comparison to R. tetralobatum  (43–53 vs. 47–69, respectively). In addition to that, the former has been described as having only two ovarian lobes whereas the latter has four. Rhinebothrium ditesticulum  can be distinguished from R. tetralobatum  by the morphology of the bothridia. It has a single posterior-most loculus on the bothridia and the anterior and posterior bothridial surfaces are completely separated, whereas, R. tetralobatum  possess two posterior-most loculi and the anterior and posterior bothridial surfaces are not completely separated, but have a constriction at the center. 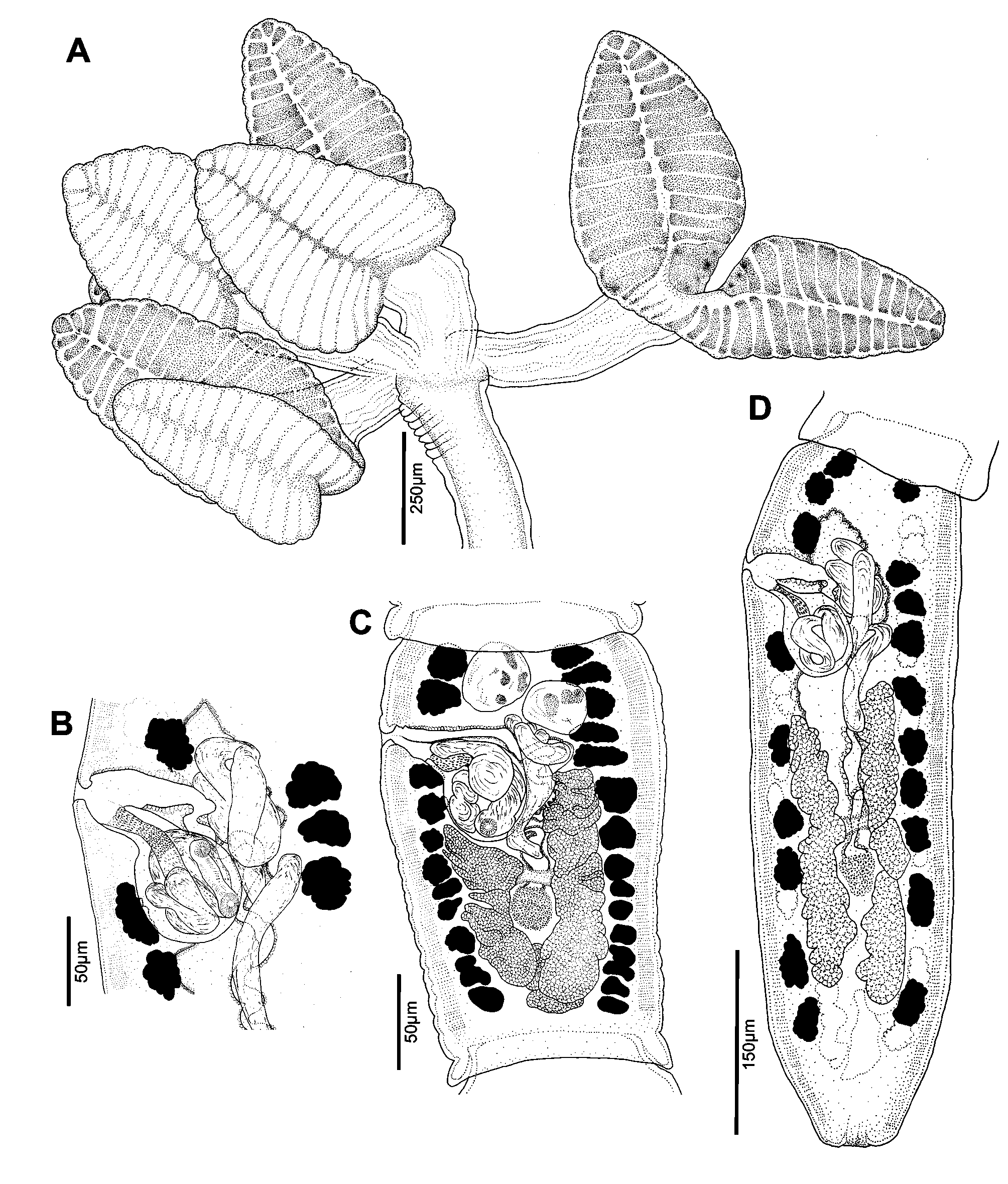