Diagnosis. Body elongate, slightly convex. Head with granules; antenna with short antennomeres. Pronotum slightly wider than long, covered with long golden setae; deep longitudinal impression on the disc. Elytra with the anterior margin yellow and two yellow patches near the apex. Pair of flat spines at the apex of each tibia. Abdomen with a pair of carinae on the first ventrite. Male genitalia with the phallobase slightly shorter than parameres; parameres slightly compressed dorsoventrally, wider at the base, strongly narrowed towards apex, apex sharply curved towards the inner margin; penis with the basal two thirds broad, almost parallel sided, and then tapering towards the sharp apex.

Thorax: Pronotum slightly wider than long ( Fig. 2AView FIGURE 2), (length: 0.74mm, width: 0.82mm); anterior margin convex; lateral margin sinuous and granulated, anterior angles produced, acute; posterior margin trisinuate. Pronotum surface with punctures and long golden setae. Sublateral carinae sinuous, reaching the anterior and posterior margin, wider on the middle portion. Deep depression on anterior portion of the longitudinal carinae. Longitudinal impression wide and deep on the disc and with a depression on each side of the posterior portion ( Fig. 2AView FIGURE 2). Elytra longer than wide (length: 2.09mm, width: 1.15mm), anterior margin sinuous, lateral margin straight, apex rounded. Elytral suture elevated. Elytra with ten intervals, surface with rows of dense granules, separated by two rows of long setae on each interval. Brown colour, with the anterior margin yellow, extending for 1/5, and two yellow patches of triangular shape near to apex ( Fig. 2AView FIGURE 2). Carinae on the intervals; 3, 4, 6 and 8, on the third interval extending for 1/5, on fourth interval extending half of the elytra, and the sublateral carinae (sixth and eighth intervals), extending for ¾ of elytral length. Epipleura with the anterior-half covered by tomentum ( Fig. 2AView FIGURE 2). Scutellum dark-brown colour, long and narrow, without punctures, with two rows of three golden setae. Hind wings macropterous. Prosternum covered by tomentum and punctures separated by their own diameter (except on the hypomera). Prosternal process U-shaped ( Fig. 2BView FIGURE 2), reaching the coxae, with the surface with punctures and tomentum. Mesoventrite short, with a shallow depression to receive the prosternal process, surface covered by tomentum. Metaventrite broad, moderately pronounced, with the surface similar to the surface of the prosternal process ( Fig. 2BView FIGURE 2). Legs (except the tarsi) covered by tomentum. Coxae slightly elongate, hind coxae with two rounded depressions; femora with microsetae; tibiae long and thin, with fringe of tomentum on distal ¾, and a pair of long, flat spines at the apex, tarsi long, 5- 5-5, with a few setae at the apex of each tarsomere, and the last tarsomere slightly smaller than the previous four combined. Claws long and thin.

Abdomen: Five ventrites ( Fig. 2BView FIGURE 2), (length: 1.24mm, width: 1.05mm). Surface covered by tomentum, except the disc of the first and second ventrite, and with punctures scattered randomly up to twice their own diameter. First ventrite carinate on the disc. Fifth with a few setae on the apex, and with lateral margins slightly produced posterolaterad.

Female. Similar to the male.

Etymology. The specific epithet segurae  is in honour of Dr. Melissa Ottoboni Segura, one of the pioneers in the study of the elmids of Brazil.

Comparative notes. Cylloepus segurae  sp. nov. is similar to Cylloepus ventralis Hinton, 1940  in the antenna with short antennomeres; pronotum with lateral margin sinuous, very deep longitudinal impression on the disc, and tibiae with fringe of tomentum on distal ¾. However it can easily be differentiated by the dark brown colour of the elytra of C. segurae  , with the yellow anterior margin extending for 1/5 of the elytra, and two yellow patches of triangular shape near to the apex; sublateral carinae on the pronotum reaching the anterior and posterior margin; epipleura with the anterior-half covered by tomentum and disc of the first and second ventrite not covered by tomentum, while C. ventralis  has the elytra uniformly brown; sublateral carinae on pronotum only reaching the anterior margin; epipleura are entirely covered by dense tomentum, and the disc of the first to fourth ventrites is not covered by tomentum. 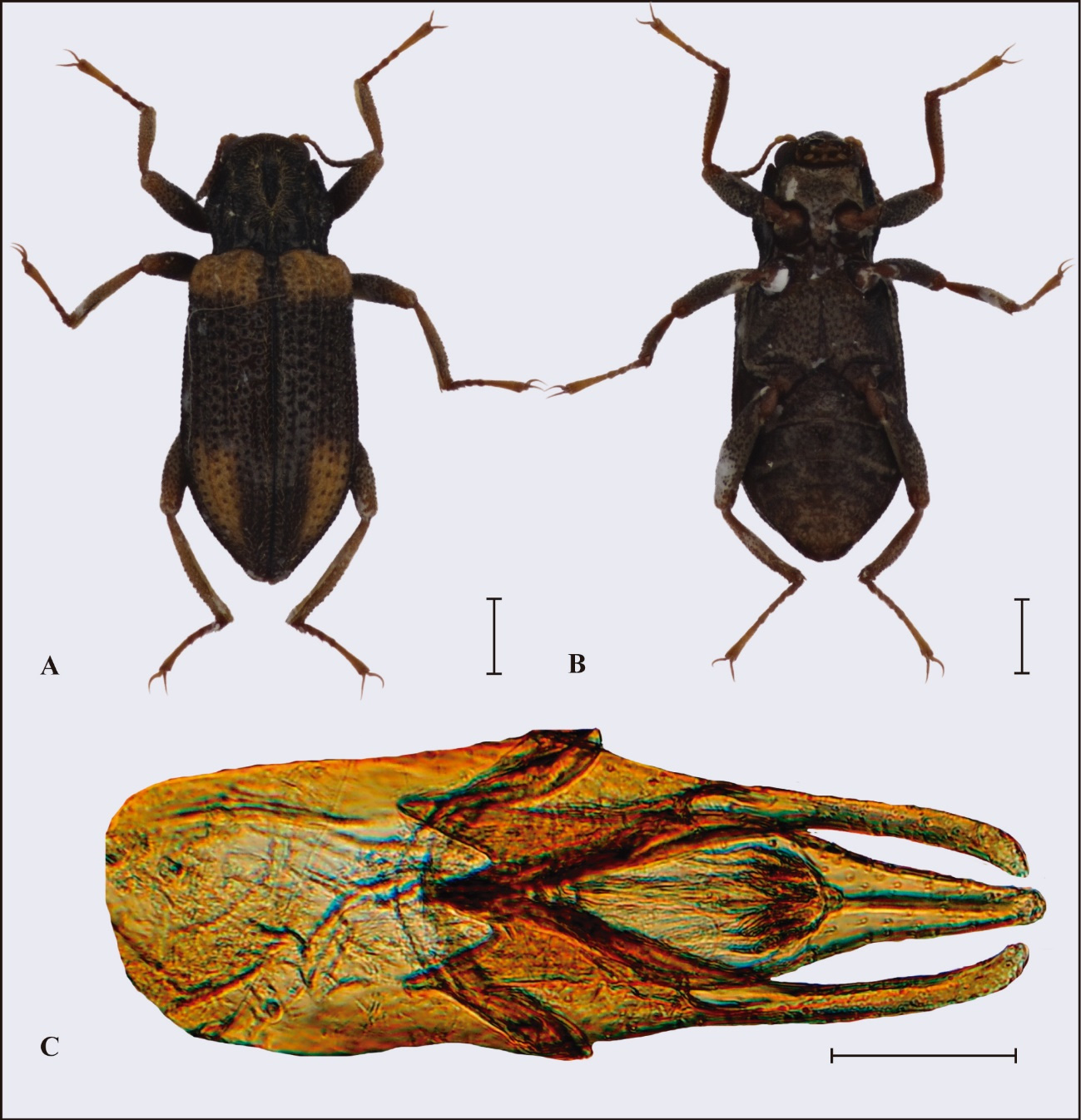