Etymology. This species is named in honor of Edith Folger Andrews (1915–2015), Nantucket naturalist, in whose yard (“Ice Pond Lot”) several of the specimens used in this study were collected.

Puparium. Formed within the mine, oriented parallel with the leaf venation; see comments for description.

Comments. Cerodontha (Dizygomyza) edithae  will key to C. (D.) paludosa Spencer  using Spencer & Steyskal (1986), but the new species has a shorter wing (not 2.5–3.0mm) and the distiphallus has a narrow basal curve and a shorter, semicircular distal curve.

Two species of Cerodontha  ( Dizygomyza  ) were previously recorded from Iris  in North America. Cerodontha thompsoni (Frick)  forms an entirely linear mine and always pupates at the base of the leaf ( Claassen 1918), whereas the mines of this species were blotches that ended well above the leaf base. Cerodontha iridophora Spencer  is known only from Florida and Louisiana. Its mine was described as irregular and whitish, with pupation occurring toward the base of the leaf. The mine of the new species is consistent with that of the European C. iraeos (Robineau-Desvoidy)  , tentatively recorded here from Missouri. The other European Iris  miner, C. iridis Hendel  , forms a mine that is very inconsistent in depth, and the puparia lie in a row, oriented perpendicularly to the leaf venation ( Ellis 2016).

In Cerodontha (Dizygomyza) thompsoni  the puparium is pale brown, and each of the two posterior spiracles has three minute bulbs, the lower two closely wrapped around the base of the longer, upper one. In C. iridophora  the puparium is dark brown and the posterior spiracles each have three distinct bulbs, the lower two curving out laterally ( Spencer & Stegmaier 1973; Spencer & Steyskal 1986). The spiracular processes of C. iraeos  , as figured by Ellis (2017), are similar to those of C. thompsoni  . In the new species C. edithae  , the puparium is yellowishorange with the dorsal half nearly black; the posterior spiracular processes are produced as one pair of strong, unbranched horns, each with two oblique grooves curving along the posterolateral surface.

The genitalia of the adult do not match the illustration or description of any species previously known from Iris  , although Cerodontha (Dizygomyza) iridis (Hendel)  [Europe, Russia] is somewhat similar. It differs, however, in that the basal curve of the distiphallus is longer, the distal section shorter and the ejaculatory apodeme is very large. The curved, C-shaped distiphallus with virtually no basal stem is mostly similar to C. palustris Nowakowski  [Europe; host unknown], C. fasciata (Strobl)  [Europe, Russia, Nearctic; host: Poa  ], with which it shares a paler orbital plate, and C. grisea  [Europe, Russia; host unknown]. In all of these, however, the basal curve of the distiphallus stem is slightly longer (not virtually absent), the apex of the distiphallus is swollen, the mesophallus is more slender, the left distal section of the basiphallus is extended, the left sclerite of the hypophallus is not split, and the ejaculatory apodeme is much larger with a ventral sclerotization on the sperm pump. 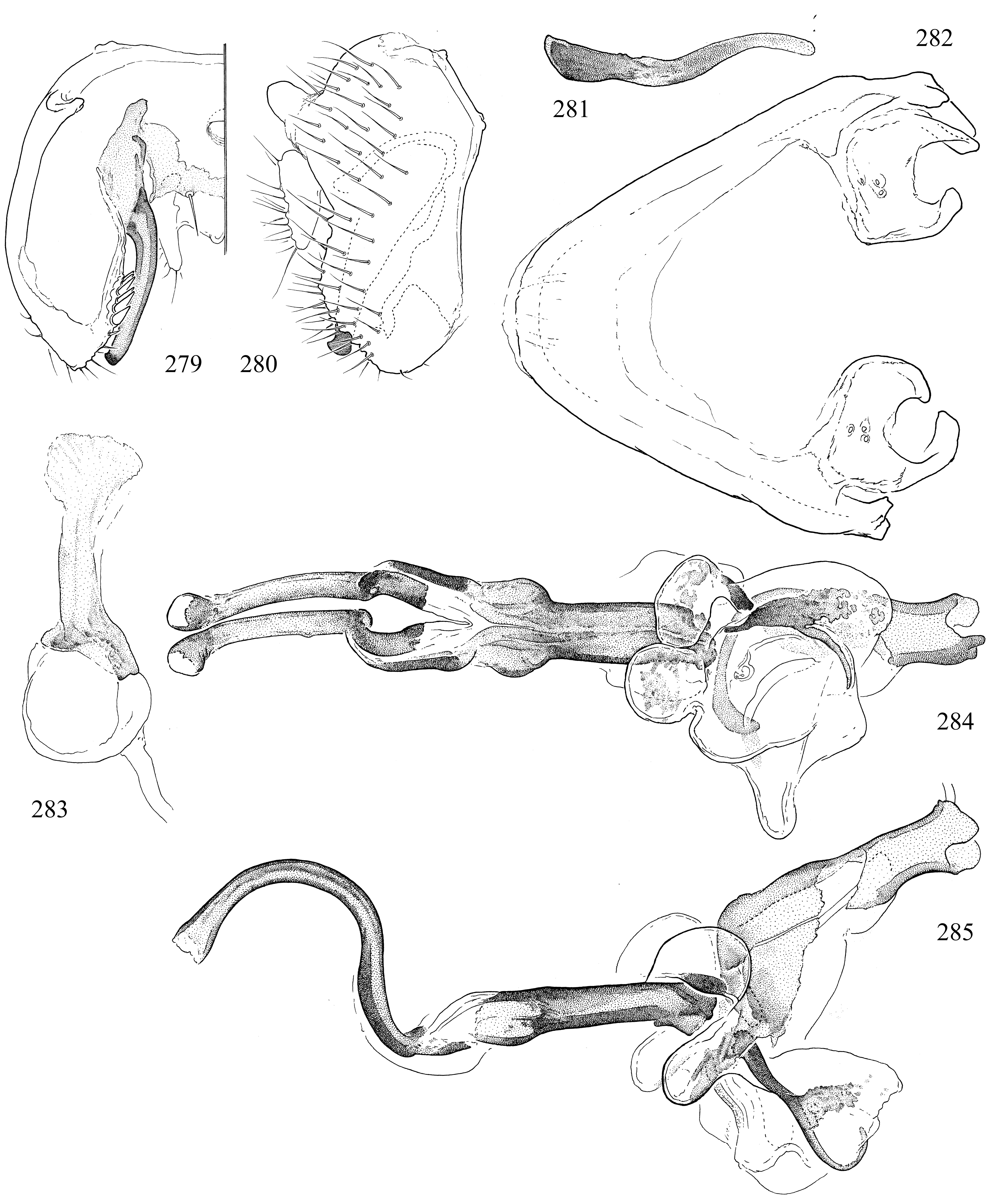