Description. The general body color of alcohol-preserved specimens collected more than 10 years ago is pale yellow brown. Biocellate. The head is mostly pale yellow with indistinct red brownish spots: one semicircular spot is in front of the ocelli; the second V-shaped spot projects onto the clypeus in front of the M-line; two short horizontal stripes present below the M-line ( Fig. 1 View FIGURES 1 – 10 ). The lateral margins of the frons are pale, widened, rounded, and turned up slightly. The palpi and middle antennal segments are pale yellow; the basal and apical antennal segments are brown. The pronotum is pale yellow, with thin brown stripes posteriolaterally and obscure brownish median band and rugosities ( Fig. 1 View FIGURES 1 – 10 ). The meso- and metascuta are pale, with brownish pattern. The abdomen is pale yellow with brown pattern dorso-laterally, more pronounced in males than in females on segments 1-6; the abdominal segments 9–10 of females are of uniform brownish color. The cerci are brownish basally, their middle parts are pale, and the apical cercal segments are brown. Legs are pale yellow, tibia with brownish basal band, the tarsi are brown. Wings are transparent, veins and costal areas are pale amber.

Male. Body length 10.0−10.5 mm, forewing 11.0−12.5 mm, wing span 23.2−26.2 mm. The posterior margin of the abdominal tergum 7 extends into a rounded and elevated process armed with numerous reddish sensilla basiconica ( Fig. 2 View FIGURES 1 – 10 ). Tergum 8 possesses an erect, triangular mesal sclerite narrowed to the base, curved forward and upward, darkly sclerotized ventrally; the distal margin of the mesal sclerit with rounded angles which bear sparse patches of ca. 7 sensilla basiconica ( Fig. 3 View FIGURES 1 – 10 ). Tergum 9 is short, without sensilla patches, covered with long fine hairs. On tergum 10, each hemitergal lobe has an oval patch of numerous sensilla basiconica meso-posteriorly ( Fig. 3 View FIGURES 1 – 10 ). The hemitergal process resembles the letter S, with relatively deep obtuse notch at midlength; the top is narrowed and rounded, directed inward, reaching the mesal sclerite ( Figs 2 & 3 View FIGURES 1 – 10 ). The aedeagal tube is plump, angled dorsally near midlength; the base of tube bent dorsad at a blunt angle near midlength, the dorsal side with unpaired hump in the distal third, the distal margin is oblique ( Fig. 4 View FIGURES 1 – 10 ). The everted aedeagal sac is curved, fingerlike, approximately 1.5 times as long as the tube, the entire surface armed with fine spines and with spines of different size and shape: slender spines grouped dorsomedially in an irregular double row from the base along almost half of the sac length with ca. 20 spines in each row; a patch of the largest spines covers the dorsodistal margin of the sac; two rows of stout spines with rounded apex occur laterally with 15–17 spines in each row; a double row of hook-like spines extends ventromedially near the apex of the sac with ca. 10 spines in each row ( Figs 4–6 View FIGURES 1 – 10 ). Probably the sac is not fully everted, but the inverted part lacks an armature ( Fig. 4 View FIGURES 1 – 10 ).

Etymology. The species is named in honour of Lidia Andrejevna Zhiltzova (St. Petersburg), in recognition of her outstanding contributions to the knowledge of stoneflies in the Russian Far East.

Distribution. The species is known from the mouth of the Third Ilistaya River, which flows down to the Ilistaya River in the Khanka Lake Basin in the Primorsky Region of the southern Russian Far East. The lake belongs to the Ussuri River system which itself is part of the Amur River system. Lake Khanka (Xingkai in Chinese) is the largest lake in Northeast Asia and is located on the border of China and Russia. It is probable that the distribution of N. zhiltzovae   is not restricted to the Russian part of the Khanka Lake Basin, but this hypothesis requires confirmation.

Diagnosis. Neoperla zhiltzovae   is associated with N. montivaga   group ( Zwick 1983), where there are a few East Asian species in which the shape of hemitergal process, aedeagus, and aedeagal armature on the sac are similar to N. zhiltzovae   . Thus male of N. lii Du   from Fujian Province of China has straight, long hemitergal process, and many large black triangular spines on the sac on the ventral and dorsal surfaces, unfortunately no detail of the spines arrangement is given (Du, 1999). The aedeagal sac of N. idella Stark & Sivec   from Vietnam is armed along dorsoapical margin with a double row of 4–7 cultriform spines; most of apical half of the sac covered with smaller spines. The hemitergal processes strongly bent and upturned at midlength (Stark & Sivec 2008). The aedeagal armature of N. laotica Zwick   also from Vietnam consists of many minute spines on convex face and two rows of very strong curved hook like spines on the venter of sac. The anterior part of the hemitergal process is straight, very short, and blunt ( Zwick 1988). Neoperla zhiltzovae   can be easily separated from three above species by the aedeagal armature dorsomedially, with slender spines arranged in an irregular double row with ca. 20 spines in each row; the largest spines covered the dorsodistal margin of the sac; two rows of stout spines with rounded apex occurred laterally, with 15–17 spines in each row; a double row of hooklike spines extended ventromedially near apex of sac, with ca. 10 spines in each row ( Figs 4–6 View FIGURES 1 – 10 ). The hemitergal processes of N. zhiltzovae   is distinctive resembling a letter S with deep obtuse notch at midlength and the top directed inward, narrowed, and rounded ( Figs 2 & 3 View FIGURES 1 – 10 ). The female subgenital plate of N. zhiltzovae   is distinguished from other Neoperla   species by weakly sclerotized and rounded process slightly expanded at the base and apex, and narrowed mesolaterally ( Figs 7 & 8 View FIGURES 1 – 10 ). Usually the females of other Neoperla   species have unmodified or bilobed with notch of different depth subgenital plates. The dorsal part of N. zhiltzovae   vagina is also very specific. It is comb-shaped and has a double row of strong sclerotized pectinate semi-oval bands with ca. 5 bands in each row ( Figs 8–10 View FIGURES 1 – 10 ). 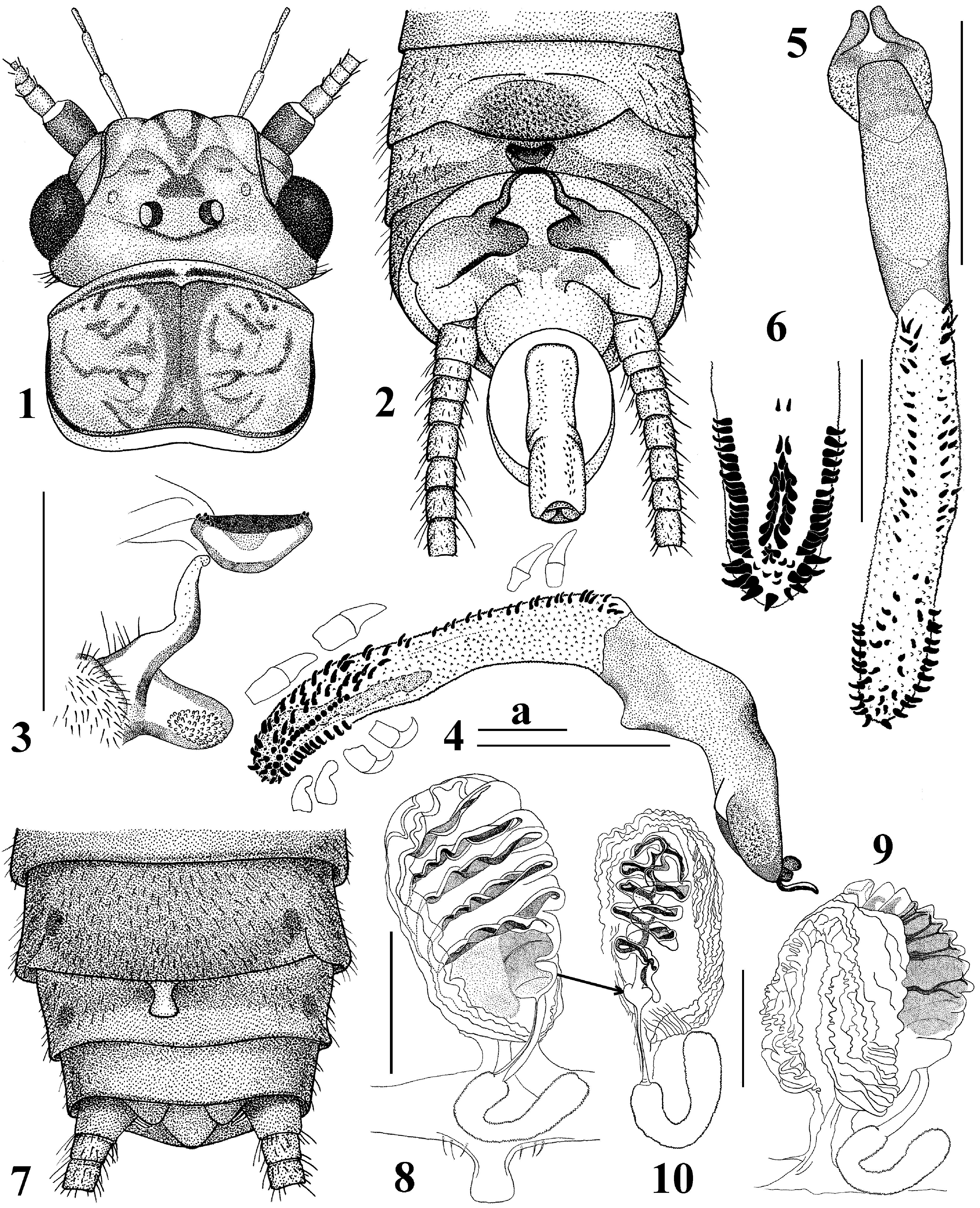