Diagnosis. Small, blue-spotted stingray of the genus Taeniura   lacking of a pair of blue longitudinal stripes along the sides of the tail; a uniformly pale ventral fold; no dorsal fold but upper margin of tail with a firm, blunt ridge; and within the genus possibly a relatively short post-orbital disc (length from rear of orbit to pectoral-fin insertion 63–65% DW), relatively long horizontal snout length (20–21% DW) and prenasal length 14–16% DW, and prenasal length 1.5–1.9 times internasal width.

Mouth small, jaws strongly asymmetric; lateral grooves short, rather well developed, curved slightly, extending from nostril to below corners of lower jaw; mouth not projecting forward when open, not protrusible; skin on chin and margin of lower jaw very fleshy, strongly papillate; teeth uniformly close-set in both jaws, in few oblique rows, not arranged in obvious quincunx; in paratype ( CSIRO   H 7724-02) rows in upper jaw ~23, lower jaw ~23. Upper jaw strongly arched, anterior edge strongly double concave; tooth band width similar over its length, only teeth of anteriormost part of upper jaw visible when mouth closed; symphysial part of jaw projecting anteroventrally. Lower jaw strongly convex anteriorly with a rounded anterior margin, lingual edge truncate (tooth band much broader at symphysis than at corner of mouth; partly interlocking into upper jaw when mouth closed; teeth not visible when mouth closed. Upper jaw of female paratype ( CSIRO   H 7724-02) with 5th tooth rows from each side of jaw having slightly enlarged teeth with longer cusps than those adjacent (directed lingually); teeth otherwise acuspid or with short cusps; those at symphysis barely larger than those adjacent. Teeth in lower jaw smaller than those of upper jaw, broad based, low, with semi-truncate to weakly cuspid distal margins; anteriormost part of crown with cenulate surface; no rows of enlarged teeth in jaw. Floor of mouth in female paratype ( CSIRO   H 7724-02) with two, slender, lobe-like oral papillae, interspace between them subequal to their distance from corner or mouth (holotype not dissected); no smaller papillae near angle of each jaw.

Distribution. Specimens collected from the Solomon Islands and Vanuatu ( Fig. 6 View FIGURE 6 ), but possibly more widely distributed in Melanesia. Underwater images from off Kavieng (New Ireland), and off Kokopo, East New Britain ( Papua New Guinea), were also verified based on colour as being this species. Underwater images viewed on Google Images of Taeniura   from Fiji also appear to be this species. Probably mainly inshore, types collected from surge channels in fringing coral reefs, to at least 18 m depth.

Etymology. Epithet in recognition of the work of the 19th C French scientist, René Lesson, who once worked on members of this genus in Melanesia. Vernacular: Oceania Fantail Ray.

The distributions of these two similar species do not appear to overlap. Both occur off Papua New Guinea, based on underwater images, but they do not appear to be sympatric. Lesson (1831) described Trygon halgani   based on material from Waigeo (Indonesia) and Port Praslin (New Ireland). His illustrated syntype ( Fig. 13 View FIGURE 13 ) is clearly referable to T. lymma   due to the presence of the longitudinal blue stripes on the tail. The two syntypes attributed to this species are listed as being from Port Praslin. Séret & McEachran (1986) compared the two available New Ireland specimens (MNHN A 7994, Fig. 14 View FIGURE 14 ) to Lesson's drawing, and found some similarities in the pattern of spots between the "larger" specimen and the drawing (mainly on the interorbital space and inner left pectoral fin). However, because of uncertainty as to which of these two specimens Lesson used as the type, they decided to consider both specimens as syntypes and also treated Trygon halgani   as a junior synonym of Taeniura lymma   .

Lesson also unequivocally mentioned the existence of ‘two soft blue lines extending along the entire length of the tail’ and these markings are evident in his colour painting of the type ( Fig. 13 View FIGURE 13 ) – a key diagnostic feature of T. lymma   but absent in T. lessoni   . However, while the two syntypes of T. halgani   are in good condition, and the blue spots remain distinctive, the blue stripes on the tail are not clearly evident based on images of these specimens. According to B. Séret (pers. comm.), the blue tail stripes mentioned by Lesson were still visible in the preserved specimens as darker bands (most evident on the "larger" specimen) when examined in the 1980s. The confirmed presence of T. lessoni   (and possible absence of T. lymma   ) from New Ireland confounds this issue. However, given that Lesson’s illustrated ‘type’ clearly depicts T. lymma   , T. halgani   must be considered a synonym of that species. Additional collections of these rays are needed from New Ireland, and the surrounding island groups of Papua New Guinea, to determine the local range of T. lessoni   in this area and whether the two species co-occur. From information gathered to date, T. lymma   has been confirmed from Milne Bay ( KRFS unregistered specimens)   , Madang ( NTUM 10296), Trobriand Islands (e.g. BMNH 1974.5.25.1, USNM 206313 View Materials )   , Port Moresby ( FMNH 120119 View Materials ) and Daru (e.g. USNM 222553 View Materials ) in Papua New Guinea   . Furthermore, Miklouho-Maclay & Macleay (1886) described Discobatis marginipinnis   from the Admiralty Islands of PNG   . While no type specimens were retained, the illustration and description clearly highlight that the possession of blue lines on the tail diagnostic of T. lymma   . In comparison, T. lessoni   has been confirmed from Rabaul (East New Britain) and Kavieng (New Ireland) based on underwater images. Thus, T. lymma   appears to be common around mainland Papua New Guinea, but T. lessoni   may be confined to New Ireland and eastern New Britain. 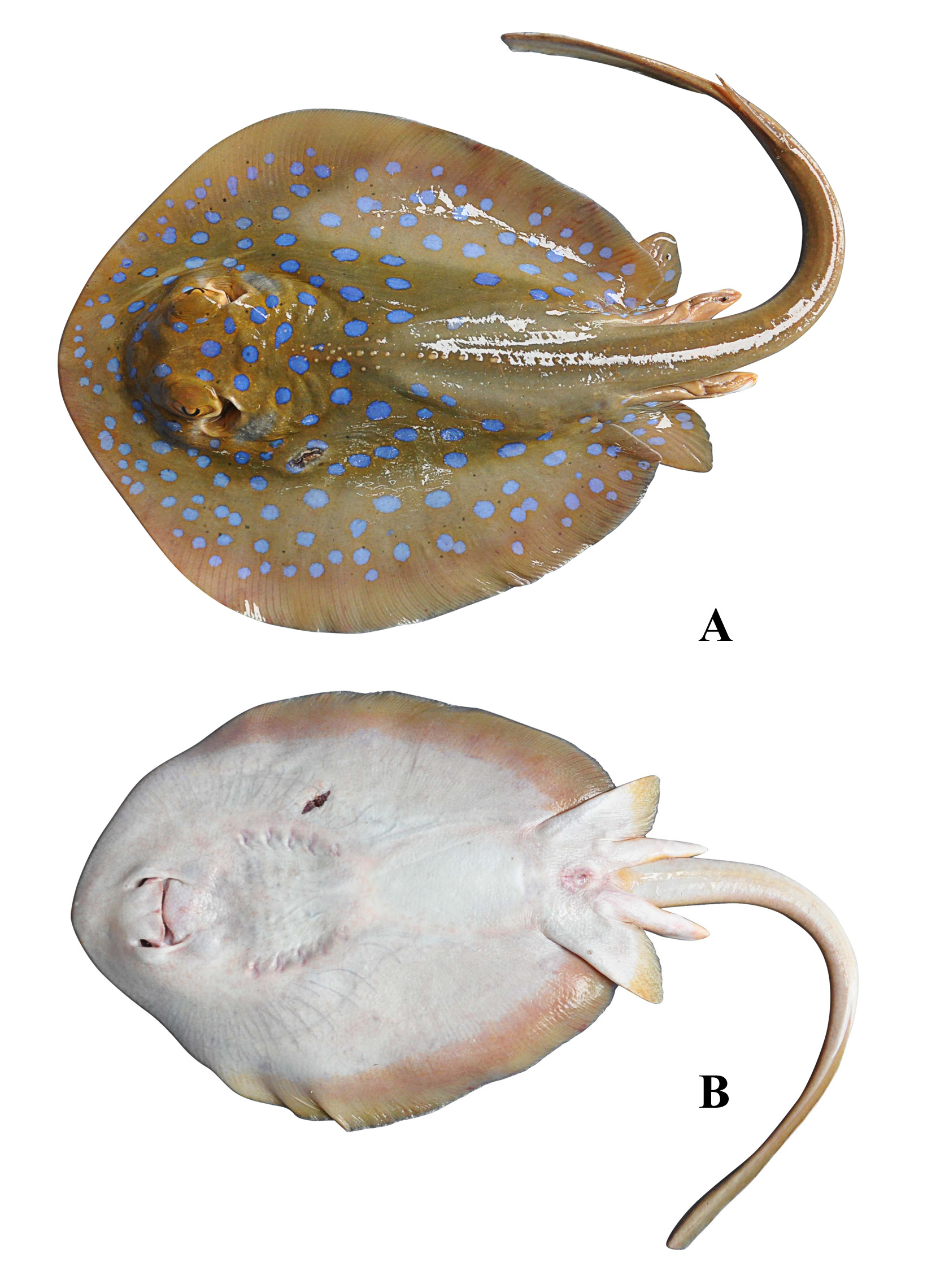 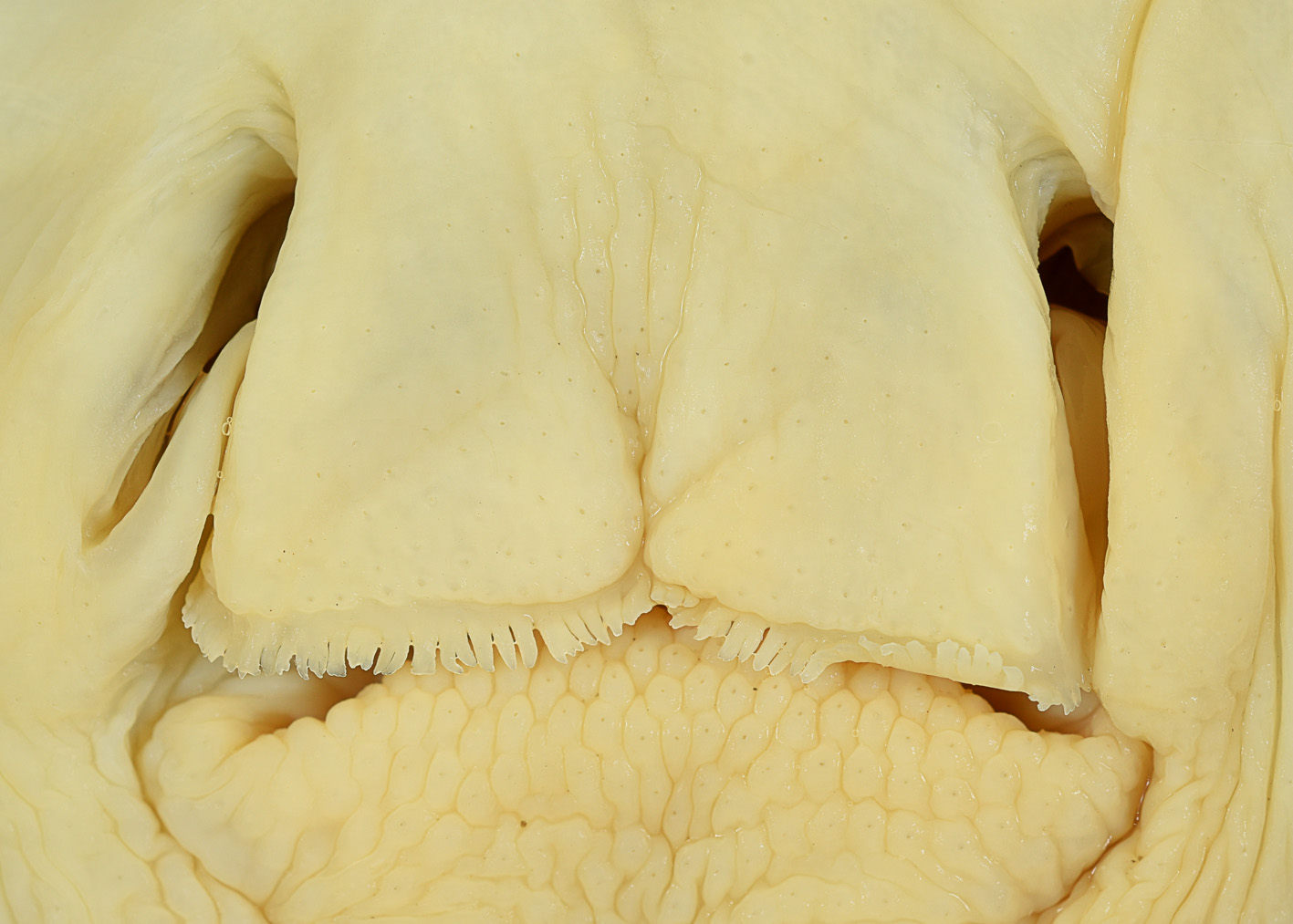 FIGURE 14. Dorsal view of one of the syntypes (MNHN A 7994) of Trygon halgani Lesson (preserved).

TABLE 2. Morphometric data for the holotype (CSIRO H 7724 - 01) and four paratypes of Taeniura lessoni sp. nov., and four non-type specimens of T. lymm a with ratios expressed as percentages of disc width.