Etymology. This taxon is named in memory of Prof. Dr David G. Frey (10/10/1915 – 01/04/1992), one of the most famous cladoceran researchers, who proposed the modern methods of taxonomy, diversity and distribution in these microcrustaceans. The sample which was used for our description was collected by D.G. Frey.

Postabdomen large, subquadrangular, strongly compressed laterally ( Figs. 8 View FIGURE 8 J, 10A). Postabdomen length/ height ratio about 2. Ventral margin straight. Proportions and armature ( Figs 8 View FIGURE 8 J–L, 10A–B) similar to those in G. brazzai . Postabdominal setae longer than postabdomen, distal segment bearing long setulae. Postabdominal claw relatively robust ( Figs 8 View FIGURE 8 L–N, 10C), subequal in length to anal margin of postabdomen. External dorsal side covered in its proximal portion with a row of fine teeth, decreasing in size distally. Internal side of claw with a row of teeth, they slightly longer in proximal portion, and decreasing in size distally. Several teeth on ventral side of claw. On the base of claw, relatively long basal spine (more than two times longer than diameter of claw base) and a small denticle located proximally.

Variability. No significant variability among New World specimens was found.

We have revised Grimaldina and demonstrated the non-cosmopolitanism in its distribution, as it was previously made for some other tropical cladocerans (other examples include Rajapaksa & Fernando 1986; 1987a; b; Hudec 2000; Korovchinsky 2004; Kotov & Hollwedel 2004; Kotov et al. 2005; Neretina & Kotov 2015; Neretina & Sinev 2016). H. J. Dumont (personal communication) was the first author suggested that Grimaldina might include more than one species worldwide. The genus was found in South ( Chatterjee et al. 2013) and South East Asia ( Maiphae et al. 2008; Kotov et al. 2013; Korovchinsky 2013; Sinev & Korovchinsky 2013; Van Damme et al. 2013; Sinev & Yusoff 2015); as well as in Central (e.g. Elías-Gutiérrez et al. 2006) and South America (Hollwedel et al. 2003; Kotov & Fuentes-Reinés 2015). But an adequate understanding of the diversity in this genus was impossible due to incompleteness of Richard’s (1892) and subsequent (e.g. Sars 1901; Smirnov 1976; 1992) descriptions. Moreover, some authors ( Kořínek 1984; Silva-Briano 1998) mixed illustrations on specimens from the Old and New World in the same plates and ignored fine morphological differences, even with their doubts on the status of non-African populations. Grimaldina also remained unrevised due to a low numbers of samples. We demonstrate that G. brazzai and G. freyi sp. nov. parthenogenetic females are superficially similar, but clearly differ in some important fine features ( Table 1). Such traits of G. freyi sp. nov. as densely located endopod seta spinulae and longer proximalmost seta on limb V are presumably plesiomorphic.

The taxonomical value of fine morphological setal traits of the proximal endopod segment is demonstrated for another anomopods, ilyocryptids ( Kotov & Štifter 2006) and Macrothrix Baird, 1843 (see Silva-Briano 1998; Dumont et al. 2002; Kotov & Hollwedel 2004; Kotov et al. 2005). The ratio between lengths of setae on limb V is important in discrimination of some daphniids (e.g. Alonso 1996; Benzie 2005; Popova et al. 2016) and chydorids ( Kotov 2009), but has not been previously used in the macrothricids probably, due to insufficient study.

Fryer (1974: p. 237–238) noted for Grimaldina : “It has not been possible to study the feeding mechanism, but filtration of collected particles is certainly involved. The filter chamber, whose filtering surface are compressed by trunk limbs 3 and 4, is very well developed and the indications are that fine particles are collected. Thus the denticulation of the scrapers of trunk limb 2 is extremely fine and suggestive of sweeping rather than scraping. Its gnathobasic spines are long and slender, the anteriormost being modified for sweeping by a posterior row of fine spinules. Trunk limb 1 is relatively slender, which suggests great mobility, for which its musculature also appears suited, and the distal lobes bear slender claws. The use of these is enigmatic as they appear not to be specialized for dragging flocculent material as they are for example in Acantholeberis , but are not specialized for grasping. Further observations are required”. Therefore, Grimaldina feeding mechanism includes particles swept from the substrate and subsequent secondary filtering. The thoracic limbs are not used for scraping the substrate as in chydorids and they differ from the truly scraping limbs of Macrothrix (i.e., thoracic limbs I–II with less prominent setal armature, and thoracic limbs III–V more delicate ( Sars 1901; Fryer 1974)).

Grimaldina has diversified and relatively long valve setae, which are convergently similar to those in truly benthic anomopods such as Ilyocryptus Sars, 1862 ( Fryer 1974; Kotov & Dumont 2000; Kotov & Štifter 2006) or Leydigia Kurz, 1875 ( Kotov 2009) . At the same time, the former (in contrast to the later two genera) "appear not to be a burrower" ( Fryer 1974, P. 236). A.Y. Sinev (personal communication) collected most abundant samples with Grimaldina brazzai from lake areas overgrown with Pistia sp. or Salvinia sp., with apparent oxygen deficiency and hydrogen sulfide smell, and these animals were mostly collected from the plants roots, not immediately from the bottom. It is interesting that living Grimaldina specimens studied by Sars (1901) were of a reddish brown color, which is also typical for benthic Ilyocryptus and Leydigia . The reddish body color in benthic cladocerans is explained by a string hemoglobin production, an adaptation to oxygen deficiency ( Smirnov 2014).

Grimaldina occurrence and abundance may be also associated with a particular season or rainfall events. It is common that standard faunistic samplings performed by European researchers in tropical regions are made during the dry seasons in order to avoid diseases such as malaria. Remarkably, Grimaldina prefers small puddles, swampy grasslands and pools with vegetation, rather than rocky or sandy littoral of large lakes (e.g. Sars 1901; Thomas 1961; Rey & Saint-Jean 1968; Elías-Gutiérrez et al. 2006; Van Damme et al. 2013; this study). Generally, efforts are aimed at lake zooplankton, while tropical marshy areas and swamps remain poorly investigated and future studies are needed (e.g. Van Damme et al. 2013).

Cladocerans probably diversified in the mid-Paleozoic ( Fryer 1995; Dumont & Negrea 2002; Kotov & Korovchinsky 2006; Van Damme & Kotov 2016), passed through several extinction bottlenecks (Korovchinsky 2006), and now are successful and diverse across continental water bodies ( Dumont & Negrea 2002; Kotov 2013). Apparently, many cladocerans were differentiated before the Gondwana breakup. The ancestors of cladocerans presumably inhabited some shallow water bodies and had unspecialized benthic life modes (see details in Kotov 2013). With this in mind, the macrothricid-like organization is plesiomorphic as compared with a chydorid-like organization specialized to life in some particular littoral zone niches. It is possible that the Grimaldina species originated from a common ancestor having a Gondwanian distribution range.

But the Old-New World differentiation could be a result of a long-distance dispersal events and subsequent speciation. Continental endemism concept is based on the fact that, although many cladocerans species are easily distributed by different vectors (including water birds) (Kotov 2013; Rogers 2014), for them it is rather difficult to form stable populations in new habitats already occupied by other taxa, better adapted to local conditions ( Rogers 2015). Therefore there is no mixing of different faunas (e.g. De Meester et al. 2002). Among cladocerans several well-documented examples of human-mediated invasions are known, but they concern mainly more evolutionary advanced forms such as daphniids ( Mergeay et al. 2005; Kotov & Taylor 2014) and chydorids ( Sharma & Kotov 2014). To date, there are no confirmed examples of invasive macrothricids. But intercontinental transitions apparently took place in some other Cladocera groups (e.g. Adamowicz et al. 2009). Since we have no molecular data for Grimaldina from different regions and paleontological records of macrothricids are unknown, we do not know which theory is best.

During the last two decades, distribution of many tropical groups of animals, plants and fungi were reconsidered based on new molecular and paleontological data, and different scenarios for Paleotropical- Neotropical differentiation were revealed. Vascular plants, especially angiosperms, with circumtropical distribution are the most actively studied group due to a large number of paleontological records and expanded genetic information (e.g. Antonelli et al. 2009; Li & Wen 2013; Nie et al. 2013). Post-Boreotropical dispersals for studied angiosperm plants explain their contemporary distribution patterns, and, at least for some species, cases of dispersal events from the Old World to New World and vice versa were convincingly demonstrated ( Antonelli et al. 2009; Li & Wen 2013; Nie et al. 2013). The same distribution patterns were found in some ectomycorrhizal fungi, associated with circumtropical vascular plants (e.g. Harrower et al. 2015). Boreotropical migration was considered as the most possible scenario for the explanation of current distribution of the cladoceran genus Leydigiopsis Sars, 1901 ( Van Damme & Sinev 2013) . Among other crustaceans, a Gondwanian origin was not confirmed for freshwater shrimps ( Page et al. 2005), prawns ( Murphy & Austin 2005) and crabs ( Daniels et al. 2006). Dispersal events, occurring long after the split up of Gondwana, explain contemporary distribution patterns of many taxa. However, studies on freshwater crayfish diversification supported the Gondwana origin hypothesis. Moreover, the differentiation of crayfish superfamilies was associated with the division of Pangaea ( Crandal et al. 2000). It should be taken into consideration that sampling (the number of investigated taxa) and the estimation of paleontological age (calibration scale) strongly influence the results of such analysis. If the fossil crayfish are known from Permian and Early Triassic deposits (see links in Crandal et al. 2000), the fossil findings for freshwater crabs are relatively recent, with the oldest known from the upper Miocene ( Daniels et al. 2006). For some other ancient groups, such as freshwater sponges, the worldwide geographic range suggests a Gondwana biographic pattern ( Manconi et al. 2015). Recently a complex situation was shown in tropical diving beetles: a potential Gondwana origin of some groups and later trans-Pacific dispersal took place towards South America in the Oligocene ( Toussaint et al. 2016). The explanation of contemporary distribution patterns for tropical organisms, including the cladocerans, remains an interesting and intriguing task for future investigations. 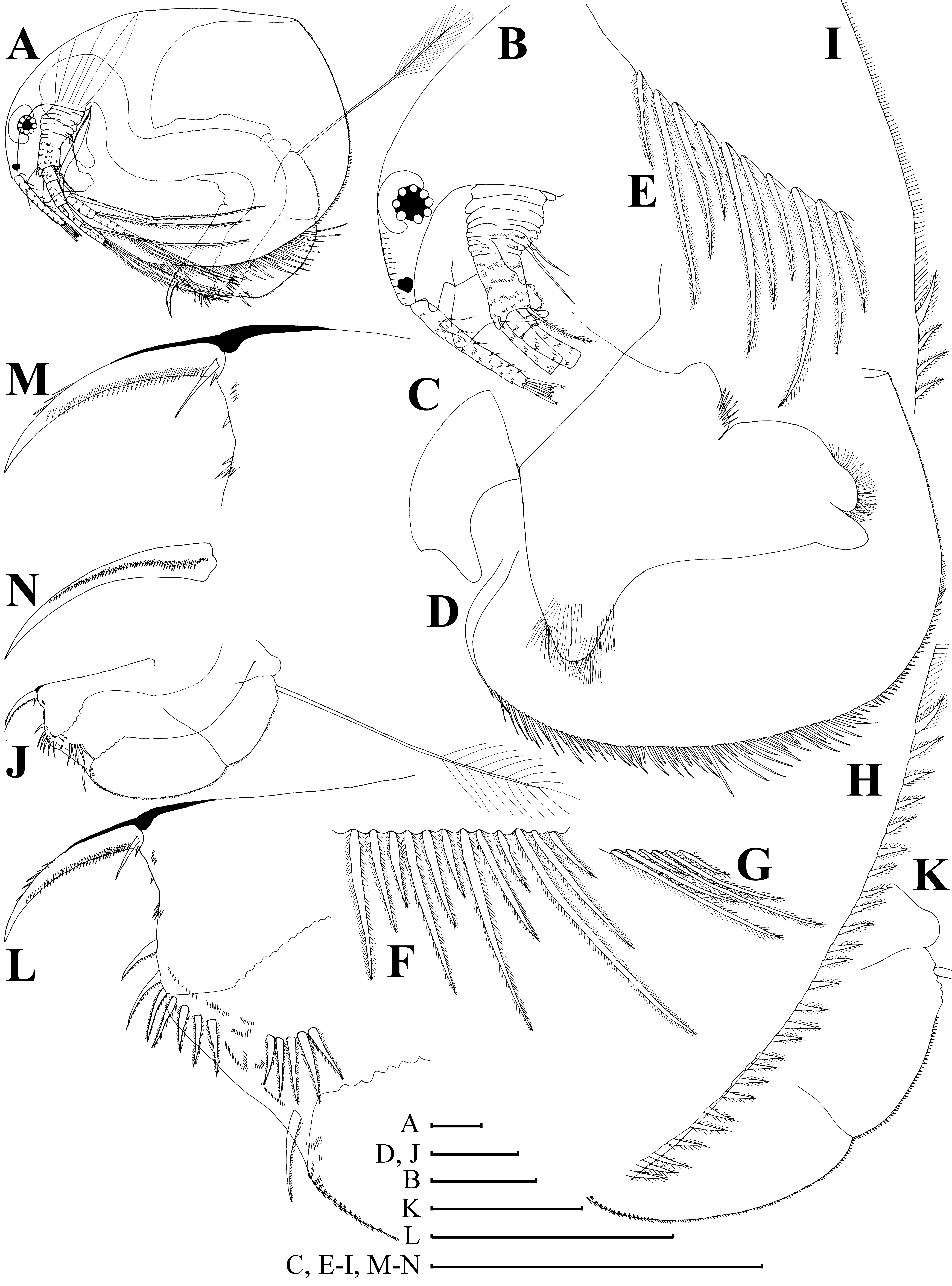 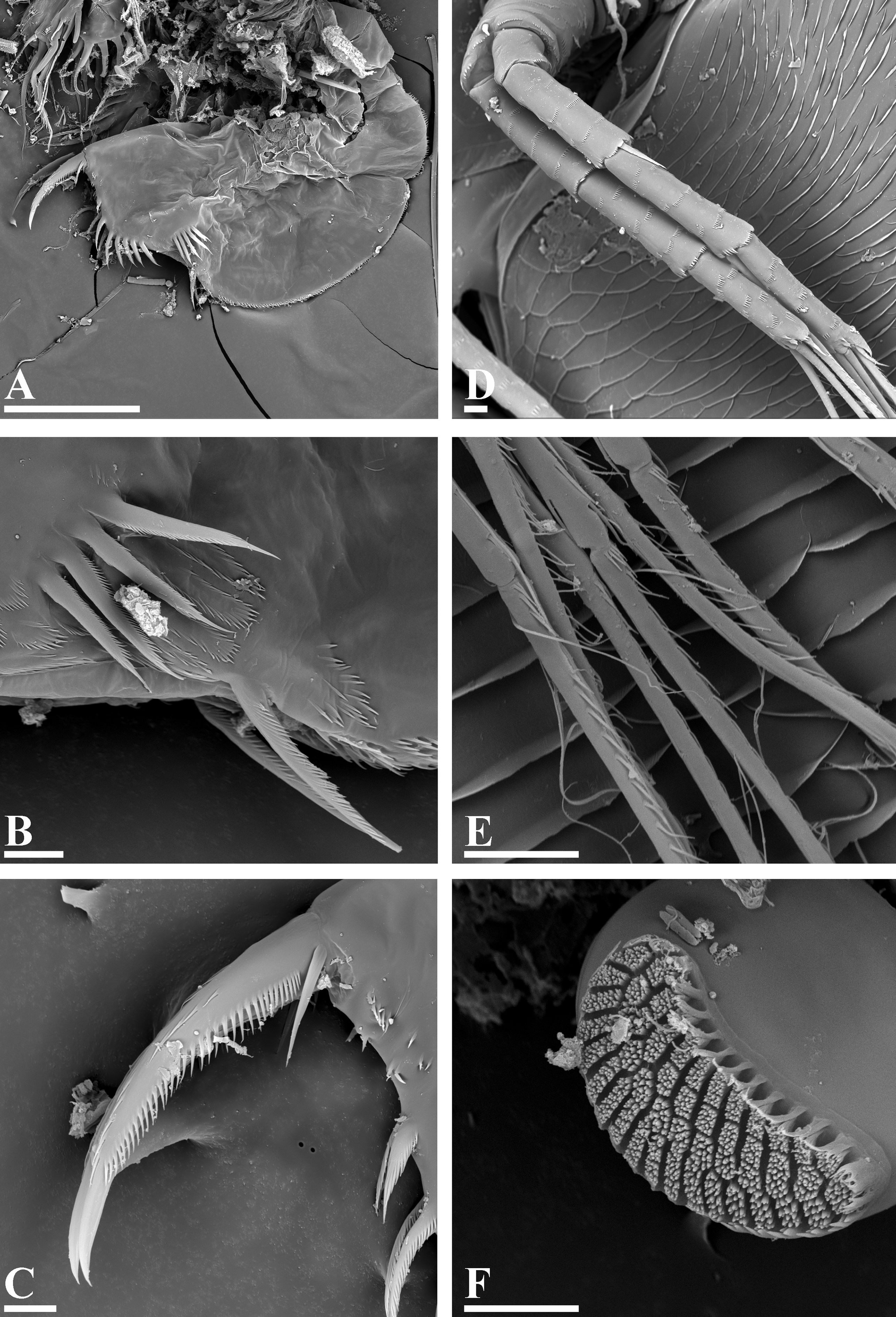 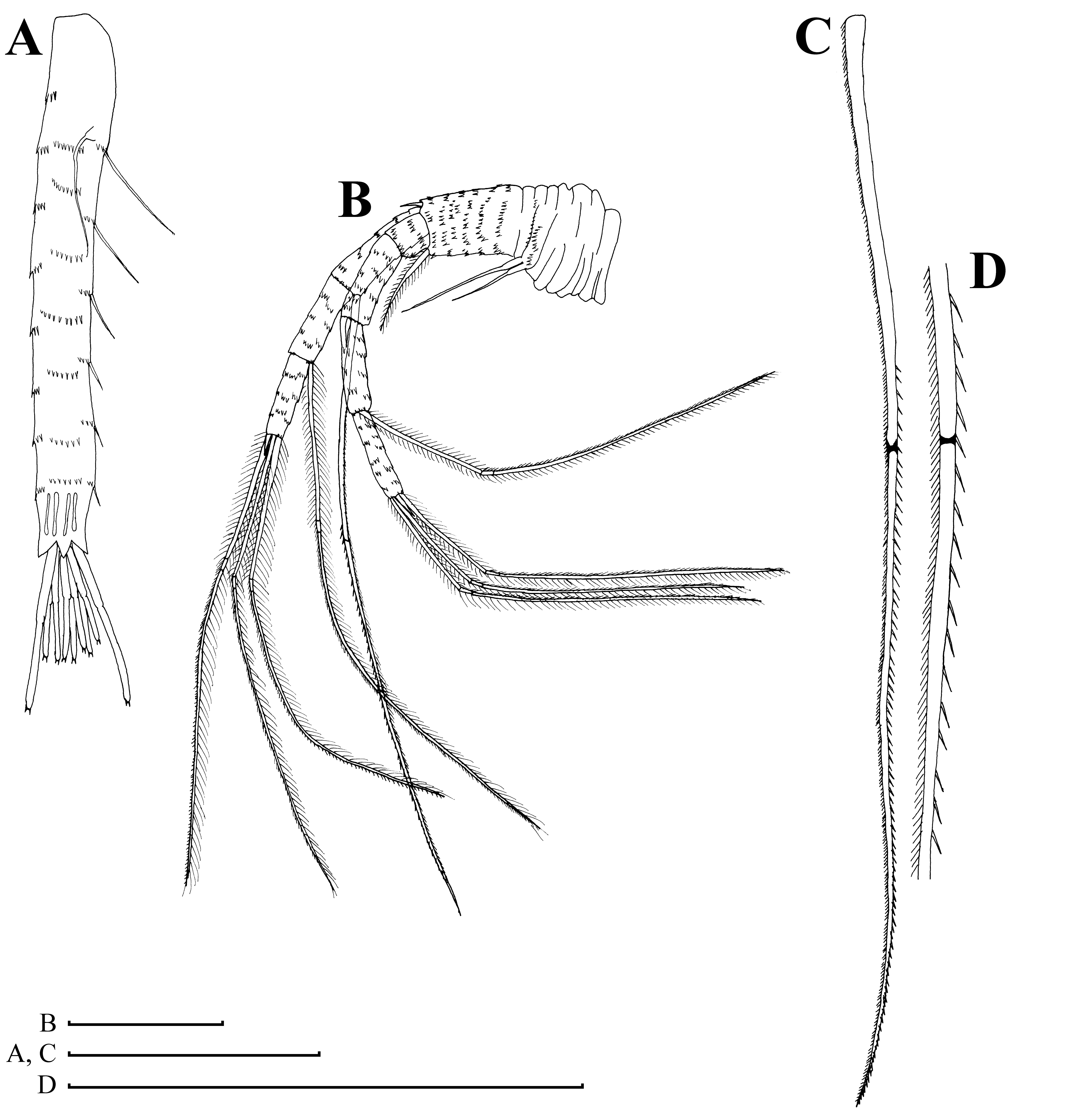 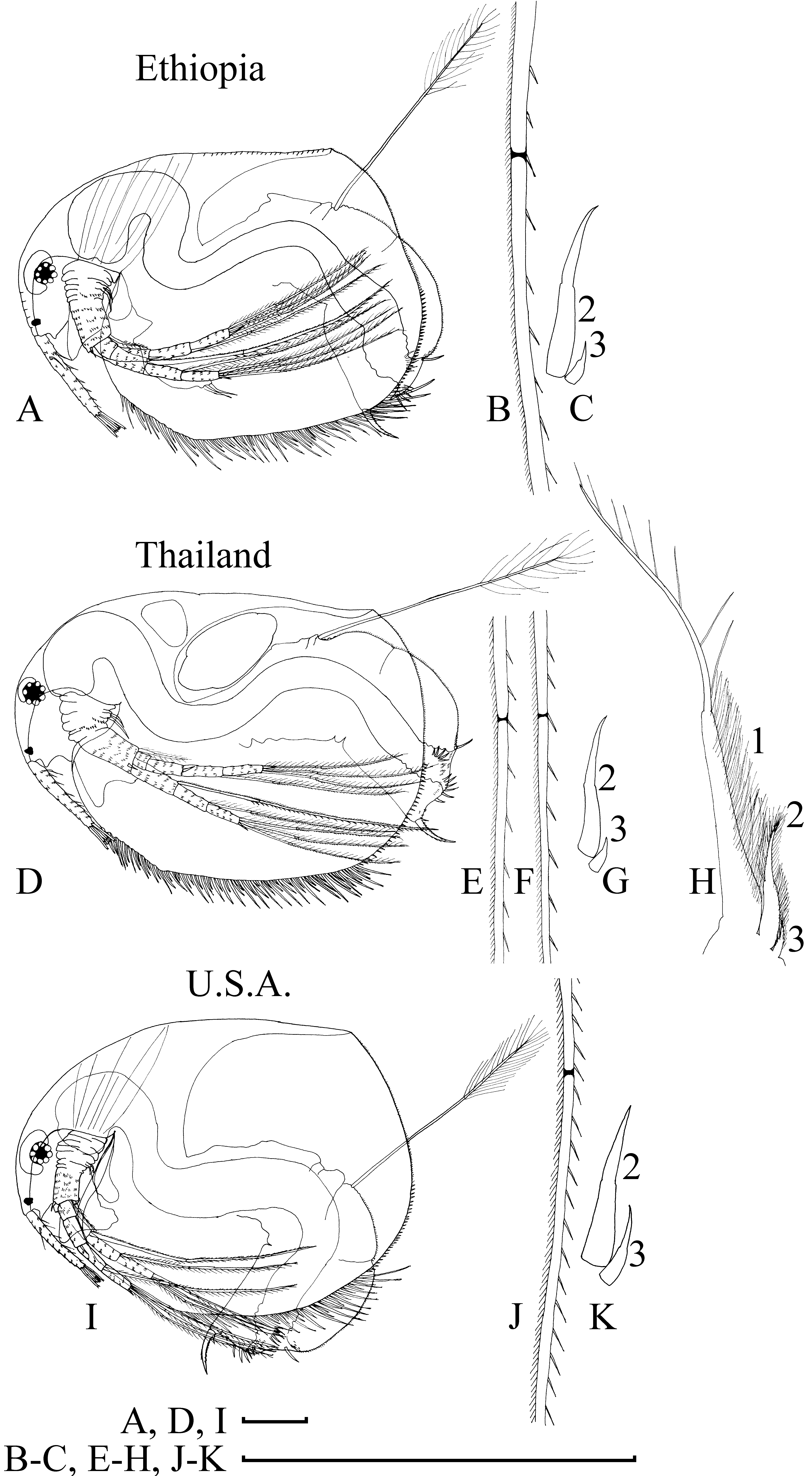