Discussion. The above combination of characters will distinguish the members of the Colaspis suilla species group from other Colaspis occurring in the United States. At the present time, I am not aware of any Neotropical Colaspis that should be assigned to this group. This group is probably an unnatural assemblage, at least in-part, defined more by what characters the species lack than by unique characters they possess.

Color. Coloration is helpful in recognizing all members of the C. suilla species group. The three new species described herein are primarily dark metallic above, and the other included species have some degree of metallic coloration on the elytral strial areas (except most specimens of C. suilla ), lateral elytral margins, and most ventral areas. With the exception of C. thomasi new species, the pronota range in color from bright metallic green to dark brown with faint metallic reflection, with the intensity of the metallic reflection generally darker or equal to that of the strial intervals of the elytra. Colaspis thomasi is highly unusual in having a dark red pronotum, contrasting with the dark metallic elytra. In C. ansa new species, the entire dorsum is dark metallic blackish-green, although the outer-most costa and the extreme elytral apex are tinged with reddish in most specimens.

Elytral costae. In members of the C. suilla species group, the costae on secondary elytral intervals are absent or poorly developed compared to the primary costae. The extreme of this condition is common in the group, where the adjacent punctate striae merge into a single punctate field with no indication of the intervening interval. Members of the group generally have the primary elytral intervals with raised costae, or if not raised, they are at least well-defined by the alignment of punctures in adjacent punctate striae. There are two exceptions. Colaspis thomasi n. sp. is atypical in that the discal costate are poorly defined and sometimes completely lacking, where intervals that are normally costate are represented by flat spaces between semi-geminate punctation; only the outer-most costa on interval VIII and those at the elytral apex are developed. Colaspis skelleyi n. sp. is also atypical, having primary costate unequally developed, with those on intervals II and VIII, and sometimes VI, distinct, while those on interval IV, and usually VI, are greatly reduced or absent.

Male abdominal ventrite V. In the C. suilla species group, the surface of male abdominal ventrite V is flat, lacking a median tubercle or low transverse swelling. Blake (1974) omitted reporting the condition of the last male ventrite in her descriptions of C. carolinensis Blake , C. flavocostata Schaeffer , and C. keyensis Blake. The male holotype specimens for these species have a distinct tubercle present on ventrite V similar to but less strongly developed than she described for C. recurva Blake. Some costate Colaspis of the southeastern United States are likely to be routinely mis-identified if this important male character is not checked.

Male genitalia. Male genitalia of the C. suilla species group conform to Division II of Flowers (1999), having a long basal hood separated from the shaft of the median lobe by a strong basal constriction, and the base of the median lobe with a fenestra and well-developed basal spurs. The endophalli of Colaspis species possess complex armature, including a complex apical sclerite ( Fig. 34, 36, 38 View Figures 33–40 : AS). These endophallic structures were not studied in detail in the present work. The shape of one endophallic sclerite was used by Chapin (1979) to distinguish two morphologically close species of the C. brunnea group, thus, it is possible the endophallic armature may possess some unexploited taxonomic utility in the C. suilla group. The shape of the median lobe in en-face view is a useful taxonomic character previously employed in Colaspis by Barber (1937) and Blake (1974). It should be noted, however, that further examination has revealed some notable variation within one species treated here (see comments under C. costipennis ).

Female genitalia. The ovipositor and spermatheca of the five species of the C. suilla group were examined. The ovipositors are short to moderately long, about three to four times as long as wide, and are uniform in structure, with the apodeme of sternite VIII long and narrow, with the hemisternites and paraprocts of segment IX possessing elongate, narrow basal rods ( Fig. 41 View Figures 41 –46). These structures and the baculum and gonocoxae are typical of those seen in other Colaspis and related genera ( Flowers 1995, 1999; Riley unpublished). The shape of the spermathecae is similar among four of the five included species, being u- or j-shaped, narrow and uniformly cylindrical with an abrupt duct connection (Fig. 49–53). The spermatheca of C. suilla , however, is differently formed, being bulbous distally and gradually narrowed from the gland connection, thus appearing to lack a discrete connection point with the spermathecal duct (Fig. 47–48). 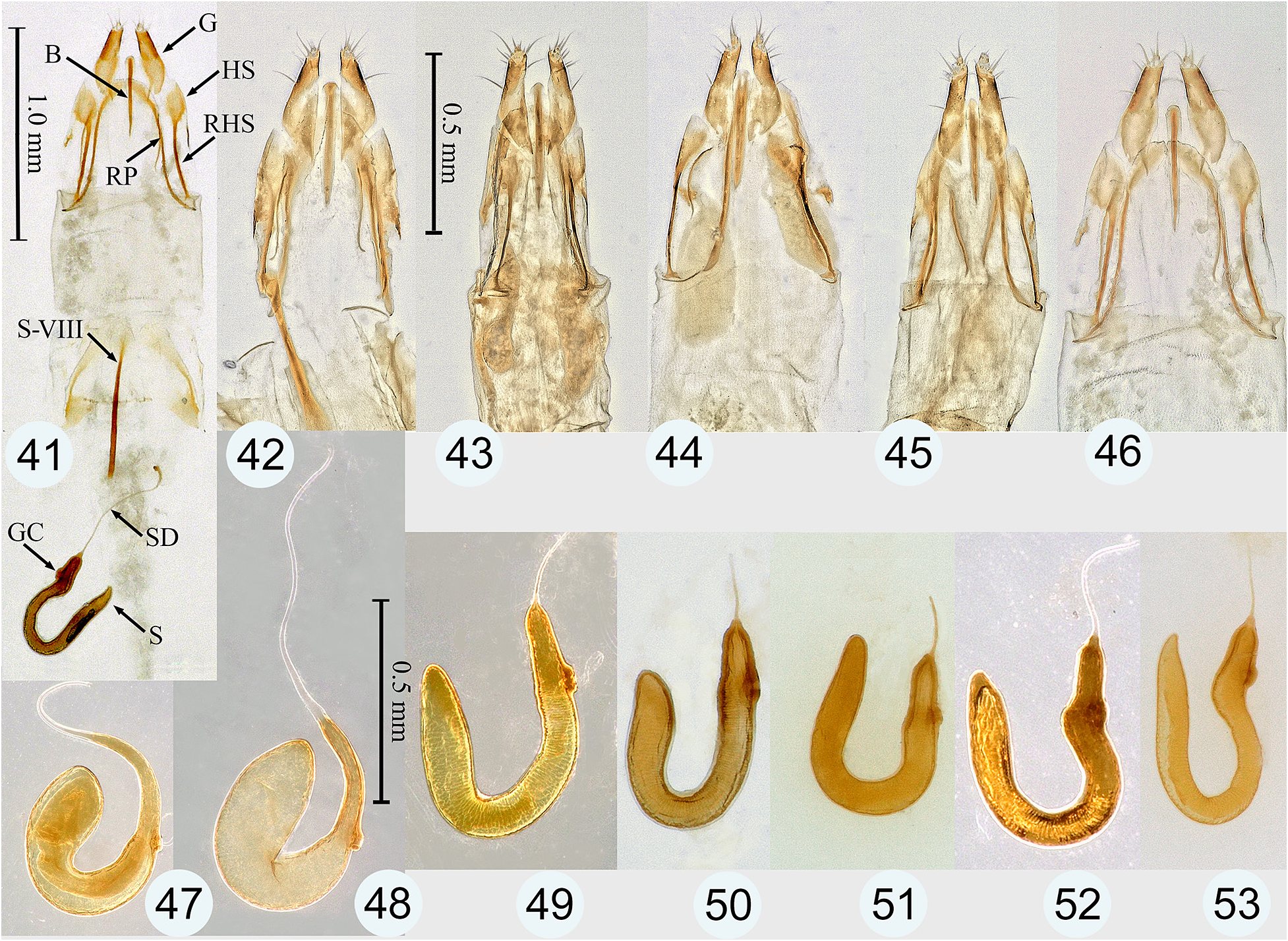