Diagnosis. Actenosigynes mantiqueirensis can be readily distinguished from the only other species in the genus by its entirely black-pubescent mesosoma ( Fig. 2 View FIGURE 2 a,d) (ferruginous dorsally in A. fulvoniger — Fig. 1 View FIGURE 1 a,d) and by the light-yellow pilosity on the terga ( Fig. 2 View FIGURE 2 a,d) (entirely black in A. fulvoniger— Fig. 1 View FIGURE 1 a,d). Other characters distinguishing these species are given in the identification key and (in italics) in the description, below.

Pubescence: black, except brownish gray on face, light yellow on T 2 –T 6, marginal fringes of S 4 and S 5, on disc of S 6 and laterally on margin of S 3. On lateral surface of mandible, labrum and submarginal groove of clypeus long, simple, stiff, semi-erect to erect; on face, genae, and vertex, fine and plumose, on disc of clypeus intermixed with fine, simple hairs, finer and shorter on vertex; on mesosoma, similar to face, but longer on anterolateral angles of mesoscutum, posterior fringe of scutellum, mesepisternum (shorter, very fine and simple ventrally), and propodeum, relatively dense but not entirely hiding body surface; on front leg, long, shortly branched on coxa, forming a fringe of long branched hairs on posterior edge of trochanter and femur, formed by shorter, simple, stiff, semi-erect bristles on inner and outer surfaces of tibia and on whole basitarsus, of shortly branched bristles on posterior surface of tibia; on mid leg, with finer, shorter, simple, erect hairs on ventral surface of trochanter, otherwise, similar to front leg; on hind leg, femoral and tibial scopae formed of long, stiff, gently curved hairs, short-branched on basal half, unbranched on apical half; on terga, very fine and appressed, short and very sparse on T 1, shorter and denser on disc of T 2, longer and denser on margin of T 2 and on disc and margin of other terga; on S 2 –S 5 forming a brush of relatively long, semi-erect, stiff bristles restricted to the apical half of the sterna, less developed on S 5, which is also fringed by long, densely plumose hairs; on S 6 forming a discal tuft of fine, poorly branched hairs.

Va r ia ti o n: the irregular impunctate area between the superior eye margin and the lateral ocellus varies in size among the paratypes and its surface can be relatively smooth but dull (as in the holotype), shiny microreticulate or smooth and shiny.

Etymology. The species is named after the mountain chain, “Serra da Mantiqueira,” located on the borders of the Brazilian states of Minas Gerais, Rio de Janeiro and São Paulo, and where the type series was collected.

Distribution. Known only from its type locality, in the municipality of Gonçalves, Minas Gerais state, Brazil. Probably occurs all along the Serra da Mantiqueira, including also areas in the states of São Paulo and Rio de Janeiro and, maybe, in other nearby mountain ranges.

Flight activity. The type series was collected in October, in the beginning of the rainy season.

Comments. The arrangement of sternal pilosity on both species of Actenosigynes, as dense, wide, marginal bands, and the way the pollen is held in the holotype of A. mantiqueirensis ( Fig. 2 View FIGURE 2 c) suggests that females may actively use them to collect and/or carry pollen from flowers, despite the fact that the scopae in the hind leg appear to be normal, comparatively to other Paracolletinae , and fully functional. 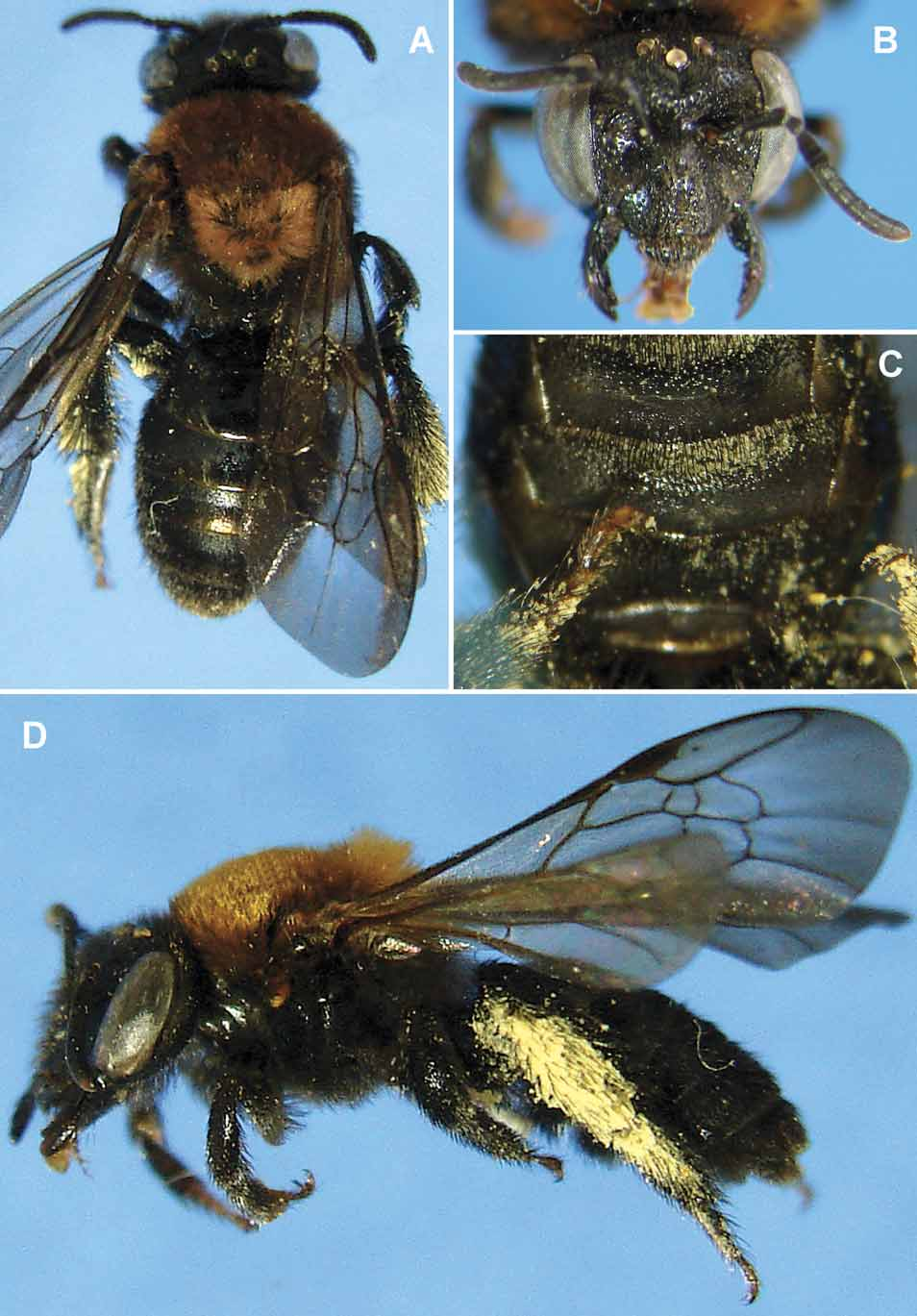