Colony upright, ca 10 cm high, arising from elongated (2–3 cm high) mass of interlacing hydrorhizal fibers anchoring it in sediment, giving rise from its upper part to bundle of individual hydrocladia, all pointing upwards. Cladia up to 6 cm high, composed proximally of up to 1.5 cm long ahydrothecate part with two closely-set, parallel rows of frontal nematothecae, placed mostly alternately, occasionally in opposite pairs; ahydrothecate part ending in deeply-incised, oblique node, separated from remainder of cladium through prosegment, the latter also ending distally in oblique node; prosegment with hydrotheca and its five associated nematothecae (a mesial one and two pairs of laterals), as well as four additional nematothecae imperceptibly displaced laterally, left and right, along longitudinal axis of internode. Remainder of hydrocladium undivided, but equivalents of internodes with hydrotheca, its four associated nematothecae (two pairs of laterals), as well as row of 2–4 nematothecae above (commonly 3, but proximal ‘internodes’ with 4 of these, and distal ‘internodes’ with only 2). Hydrotheca cup-shaped, fully adnate, abaxial wall straight for most of its length, slightly curved inwardly at aperture; rim smooth, aperture circular, facing upwards. All nematothecae bithalamic and movable; mesial nematotheca indistinguishable morphologically from its counterparts situated proximally in row, all with slightly scooped rim of upper chamber; lateral nematothecae in pairs, first pair borne on tips of moderately-developed apophyses, second pair seated near bases of same apophyses; first pair greatly surpassing hydrothecal rim, with tall basal chamber, upper chamber shallow, conical, with rim entire; second pair comparatively shorter, wall of upper chamber scooped on adaxial side. Gonothecae absent.

There is little doubt that the present material is conspecific with that described and illustrated earlier by Ansín Agís et al. (2009). Both display a single row of nematothecae between successive hydrothecae (except for the proximalmost internodes), and this represents a deviation from the current concept of A. varians ( Billard, 1911)   , in which the nematothecae are arranged in two parallel rows, even though their distribution in pairs is not always met with ( Billard 1913; present study).Additionally, a comparison of the material at hand with true specimens of A. varians   from Indonesia (sample HRG-1584) reveals a series of discrete differences, such as the shape of the hydrotheca (compare Fig. 12 View Fig B–C and 12D–E, respectively) and the size of the anterior pair of lateral nematothecae (compare Fig. 13B and 13C View Fig ). Their morphometrical differences are summarized in Table 4. For these reasons, the New Caledonian material is provisionally assigned to the hydroid of Billard (1911), pending a more comprehensive morphological study based on a relevant number of colonies, as well as genetic data.

In spite of the opinion of Schuchert (1997), A. balei   is here kept distinct from A.varians   . Indeed, the examination of several samples from three distant localities in Indonesia reveals a uniformity of morphological characters: 1) although deeply-incised, strongly oblique nodes occur here and there along the stems, delimiting internodes with numerous hydrothecae, a prosegment is lacking in all specimens; 2) the proximal part of each stem (± 1 cm long) bears a varied number of hydrothecae until the first strongly oblique node occurs; in some specimens, this portion could be segmented by slightly oblique nodes into internode bearing irregularly 1, 2, 3, etc. hydrothecae; these nodes, although distinct, are neither that deeply-incised, nor that strongly oblique as the scarce nodes that occasionally divide the caulus above; 3) there is no single mesial nematotheca, even in the internodes immediately above a deeply-incised, strongly-oblique node; 4) there are generally 2 pairs (occasionally 3 proximally) of nematothecae in two parallel rows above each hydrotheca, the members of each pair being always situated at the same level; 5) a deeply-incised, strongly-oblique node generally passes through two consecutive pairs of stem nematothecae, one being confined to the internode below, the other to the internode above; 6) all nematothecae have a hypertrophied perisarc; the first pair of laterals is borne on long, horizontal apophyses fused to the lateral walls of the hydrotheca; the second pair is sessile, and the nematothecae have a size comparable to their anterior counterparts; the wall of the upper chamber of the anterior nematothecae is sinusoid on the adaxial side.

Antennella biarmata Nutting, 1927   is very likely a junior synonym of A. balei   , judging from the shape and size of the apophysis supporting the lateral nematothecae, and additional characters mentioned in the original account.

The material assigned by Rees & Vervoort (1987) to A. varians   could not be allocated with certainty to either A. varians   or A. balei   , due to an unusual segmentation of the stems and some characters displayed by the nematothecae. 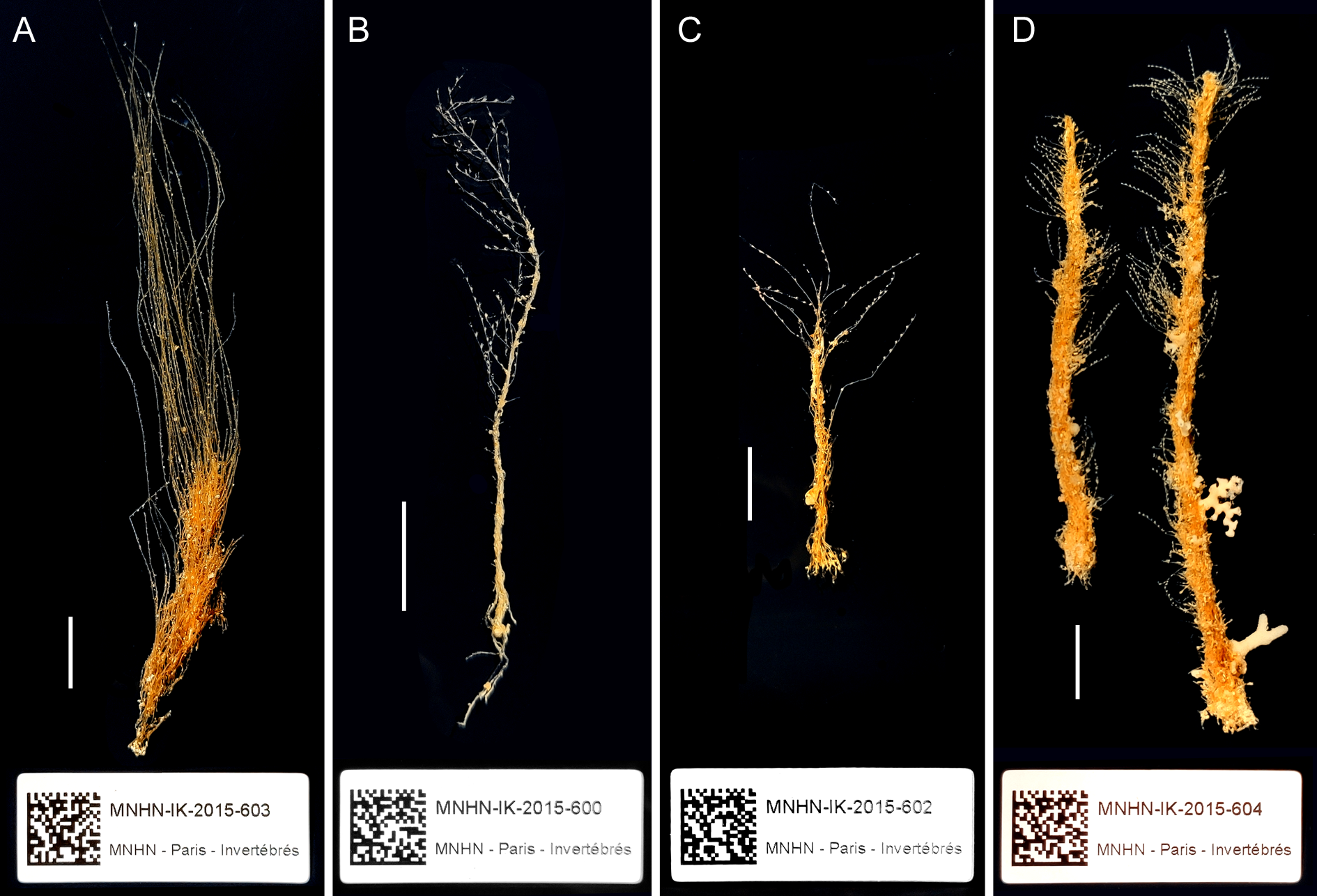 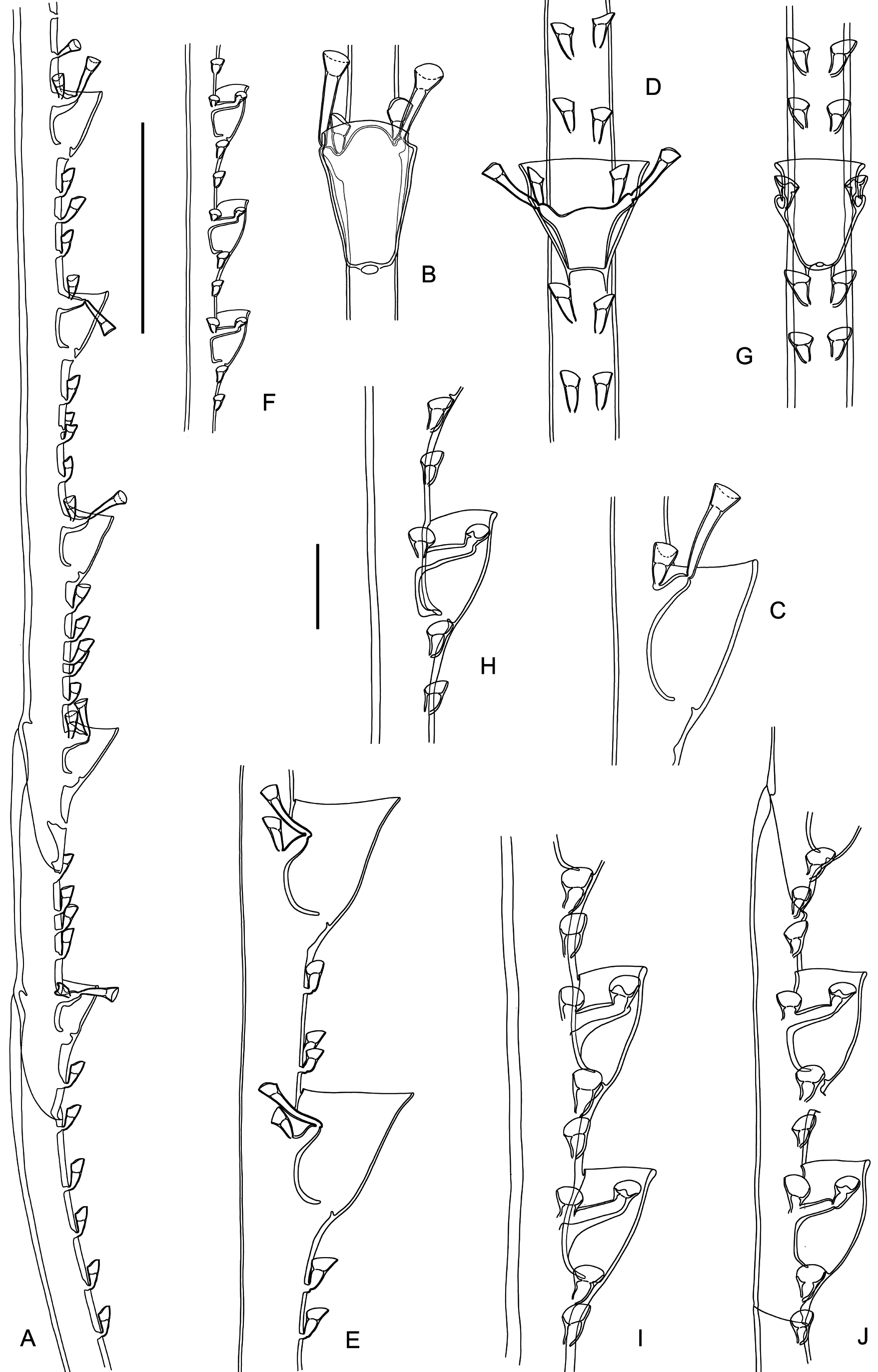