Colonies upright, up to 2 cm high, coplanar, rigid, with thick, brown perisarc, arising from creeping, branching, slightly flattened hydrorhiza. Stem monosiphonic; proximal part straight, irregularly divided into few internodes of varied length by means of transverse nodes; distalmost nodes with two parallel, closely-set rows of frontal nematothecae; remainder of stem divided into regular internodes by transverse nodes; each internode moderately long, straight, bearing one or two lateral apophyses and 4–6 frontal nematothecae in two closely-set rows; apophyses subterminal on internodes; when two of these are present on same internode, either opposite or subopposite; two types of apophyses: first type very short, ending in straight node and bearing secondary stem, and second type comparatively longer, ending in oblique node and bearing cladium; first regular thecate stem internode with either pair of dissimilar apophyses, one bearing secondary stem, the other a cladium, or with pair of apophyses supporting two secondary stem; in the latter case, following internode may bear two dissimilar apophyses; remainder of stem internodes with single apophyses supporting cladia only, distal part of stem assuming scorpioid shape, typical of genus. Secondary stems, like main stem, divided into regular internodes, each bearing nematothecae and upwardly-directed apophysis supporting cladium; consequently, all their cladia point upwards with respect to colony, and their hydrothecae all facing towards main stem. All cladia borne directly on main stem have their hydrothecae facing downwards in proximal part of colony and, as stem curves away in scorpioid manner, hydrothecal apertures of more distal cladia increasingly facing outwards or even upwards, depending of length of distal part of stem and number of cladia it bears. Cladia up to 8 mm long, heteromerously divided into hydrothecate and ahydrothecate internodes; up to 10 hydrothecate internodes per cladium, relatively short, each with proximal node oblique and distal node transverse, bearing hydrotheca in middle and its complement of nematothecae: one mesial, a pair of laterals, as well as axillar one on one side of hydrotheca; hydrotheca deep, tubular, half adnate, free adaxial wall and abaxial wall nearly straight, aperture circular, rim smooth; all nematothecae movable and bithalamic; laterals conical, borne on conspicuous apophyses, whole set reaching hydrothecal rim; upper chamber of lateral nematothecae lowered on adaxial side, and there with sinusoid margin. Cladial ahydrothecate internodes of varied length, with proximal node straight and distal node oblique, each bearing frontal nematotheca proximally. Stems either mono- or dioecious; gonothecae sexually dimorphic, borne exclusively on cladia by means of 2-segmented pedicel, given off laterally between base of hydrotheca and its mesial nematotheca; female gonothecae large, piriform, slightly flattened laterally, distally truncate and there with broad, thickened, ovoid aperture, proximally with 2–3 nematothecae; male gonothecae, comparatively smaller, ovoid, circular in transverse section, distally with small, rounded aperture, proximally with a nematotheca.

The illustrations and measurements provided by Ansín Agís et al. (2009) leave little doubt that their material is conspecific with that dealt with herein. Although they identified it as M. quadridens (McCrady, 1859)   , it could be demonstrated that they are specifically distinct. Indeed, Caribbean specimens ( Galea 2010), corresponding strictly to earlier descriptions of McCrady’s species, are more delicate in appearance and build exclusively scorpioid sympodia, while the present material is composed of comparatively stronger colonies with distinct, upright, straight main stems ( Fig. 17J View Fig ).

Monostaechas fisheri   is still a poorly-known, seldomly-recorded species. Speculations on its affinities with M. quadridens   often provided inconclusive or cautious opinions (e.g., Stechow 1925; Vervoort 1968; Migotto 1996; Schuchert 1997), although some authors pleaded for a definitive inclusion in its synonymy (e.g., Leloup 1937; Watson 2011).

Schuchert (1997) reexamined the type of M. fisheri   and provided a comprehensive description and illustrations of it. It is mainly characterized by the presence of a definite, straight main stem, a peculiar mode of branching, with secondary stems arising singly or forming opposite pairs with a cladium (see also Nutting 1905: pl. 5 fig. 3). No such branching pattern is known to occur in M. quadridens   , although the existence of dichotomously-branched colonies (e.g., Allman 1877: pl. 22 figs 1–5, as M. dichotoma   ; Nutting 1900: pl. 13 fig. 1; Vervoort 1968; Hirohito 1974: fig. 16d; Calder 1983; Hirohito 1995: fig. 84b) is not uncommon, while the occurrence of aberrant secondary stems ( Hirohito 1995: fig. 84a) is a rare, peculiar condition.

Unlike the present material from New Caledonia, the cladial ahydrothecate internodes of the type material of M. fisheri   possess two nematothecae instead of only one, although no other differences could be noted between them. It is thus assumed that the present material is, with little doubt, conspecific with M. fisheri   . Supporting this hypothesis, Watson (2011, as M. quadridens   ) noted the presence of 1–2 nematothecae in her specimens, with distinct stems that could probably be assignable as well to Nutting’s (1905) hydroid. Their color in life was “dark purplish grey”, thus different from the paleyellow colonies of M. quadridens   from the Caribbean collected by Galea (2010). Although Watson argued that her Australian material was indistinguishable from a colony of M. quadridens   from Sapelo Island, GA, USA, no information, notably on the condition of the stem, was provided to support her statement.

Only male gonothecae, bearing a single basal nematotheca, have been documented in M. fisheri ( Schuchert 1997)   . The present material also possesses female gonothecae, of a much larger size compared to those of M. quadridens   , and bearing 2–3 basal nematothecae, further supporting the specific separation between these species. Similar gonothecae were reported upon by Watson (2011: fig. 9e).

Specimens in material MNHN-IK-2015-605 show a more complex branching pattern of the main stem, with an increasing number of ramifications per site, and the formation of up to third order stems. Some examples of branching are illustrated in Fig. 18 View Fig . This appears to be a variety of the nominal species, distinguished by its proportionally smaller and shallower hydrothecae and longest (trumpet-shaped) lateral nematothecae, the other morphological characters, including the shape and size of gonothecae of both sexes, being similar to those of the nominal species.

A series of records attributed to M. fisheri   are, most probably, based on misidentifications. Indeed, the Cape Verde material studied by Bedot (1921b) is said to exhibit all characters of M. fisheri var. simplex Billard, 1913   , which is now recognized as the simplest mode of colony growth met with in McCrady’s hydroid (e.g., Schuchert 1997).

Additionally, Vannucci’s (1949, 1950) material reportedly comprised both simple and ramified stems, although their mode of branching was not described in detail. On the account of their geographical occurrence and the size of their female gonothecae with respect to the hydrothecae ( Vannucci 1950: pl. 1 fig. 6), it is believed that she actually had specimens of M. quadridens   . Migotto (1996) agrees that “Vannucci’s description (1949) of M. fisheri   […] clearly conforms with the current conception of M. quadridens   ”.

The colony illustrated by Park (2010: fig. 75a, as M. quadridens   ) shows a peculiar branching pattern, approaching the condition met with in the present species, and both could be conspecific. However, her description fits the classical concept of M. quadridens   , as well as the size of the illustrated gonothecae ( Park 2010: fig. 75b, d) do, but, since many colonies were available, it is conceivable that some belonged to one species, while some others to the second one. 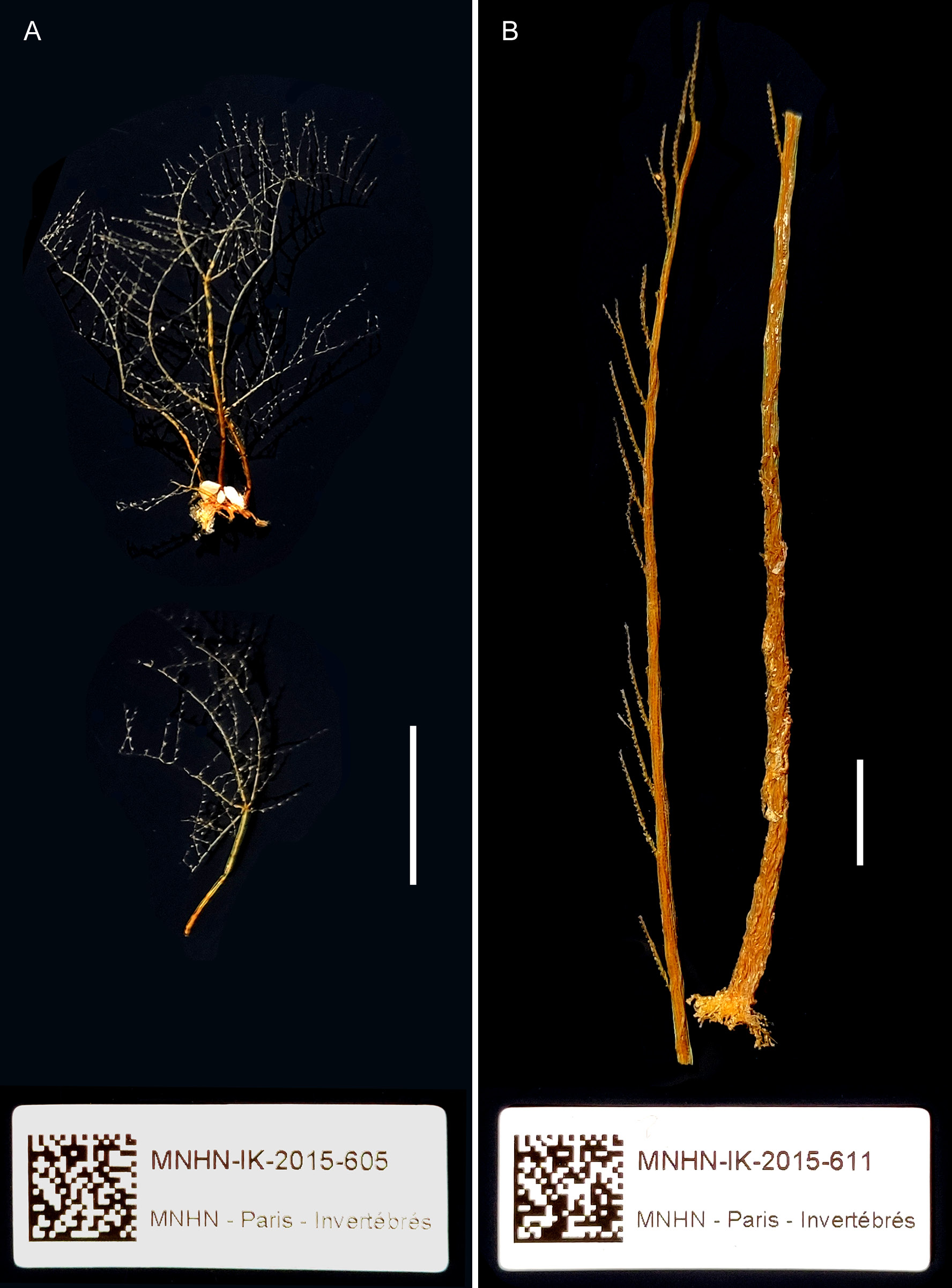