Remarks. The characteristic habit of this species is due to auto-epizoism, with new stolons creeping up the stems of older plumes and giving rise to new cormoids. The characteristic dark-brown color is not only due to the thick perisarc, but also to the presence of zooxanthellae in the coenosarc (a positive iodine reaction with the starch contained in the zooxanthellae was obtained even in formalin fixed material). The stem internodes are well delimited and carry a lateral apophysis supporting a cladium, as well as two nematothecae, one of which is borne on the basal part of the apophysis, and the second slightly above on the internode ( Fig. 9 View FIGURE 9 A). The cladia are very approximated and typically shifted on to the anterior side of the stem (Pl. 3 G). Each cormidium has two internal perisarcal septa, the basalmost being a continuation of the intrathecal septum ( Fig. 9 View FIGURE 9 B). The hydrothecal rim is provided with nine cusps, of which the frontal one carries a conspicuous protuberance, the first pair is squared in lateral view, while the others are triangular ( Fig. 9 View FIGURE 9 E). Only the second pair is well developed and strongly everted, while all others point inwardly ( Fig. 9 View FIGURE 9 D). The mesial nematothecae are generally well developed, though differences in length occur between those in the proximalmost cormidia and those situated more distally ( Fig. 9 View FIGURE 9 E). The corbula is open, the rachis is divided into very short internodes, each carrying a lateral apophysis supporting a costa, two centrally placed nematothecae, and a basal mamelon of which is borne a gonotheca ( Fig. 9 View FIGURE 9 F). There is an unpaired corbulacosta, basal on the rachis, not mentioned in earlier accounts. The basalmost segments of each corbulacosta bear a triplet of nematothecae, two of which are fused to a varying degree ( Fig. 9 View FIGURE 9 I).

The Chilean material gathered by Poeppig and listed under Aglaophenia tenerrima   by Kirchenpauer (1876) was reexamined by Stechow (1919), who made available the name. Though only a microslide preparation containing a single hydrocladium is left 19, the description and illustrations provided by Stechow leave little doubt about its conspecificity with the present species.

There has been extensive discussion in the past regarding the taxonomic status of several closely-related nominal species. Billard (1909 c; 1910) sunk A. acanthocarpa   and A. laxa Allman, 1876   in the synonymy of A. divaricata   , while Bale (1924) kept them distinct from the latter. However, the description provided by Bale (1884) for A. divaricata   does not differ from the one he gave later ( Bale 1924) for A. acanthocarpa   , though in the latter work several characters are emphasized in order to separate the species, such as the shape of the mesial nematotheca and the degree of immersion of the hydrotheca. Trebilcock (1928) found, in material assigned to A. laxa   , a huge difference in the distance between successive hydrocladia (varying by twice as much), and the structure of the corbula was in agreement to that of both A. divaricata   and A. acanthocarpa   . Finally, Vervoort & Watson (2003, p. 277), recognized that the “ A. divaricata   – A. acanthocarpa   group (including A. laxa   ) is in need of a detailed review”.

We share the same point of view as Billard (1910) and choose to use the oldest available name for the present material, until the taxonomy of this species group is clarified through molecular genetic studies.

Distribution in Chile. Only known from Talcahuano ( Stechow 1919, as Aglaophenia tenerrima   ) and Corral (present record). 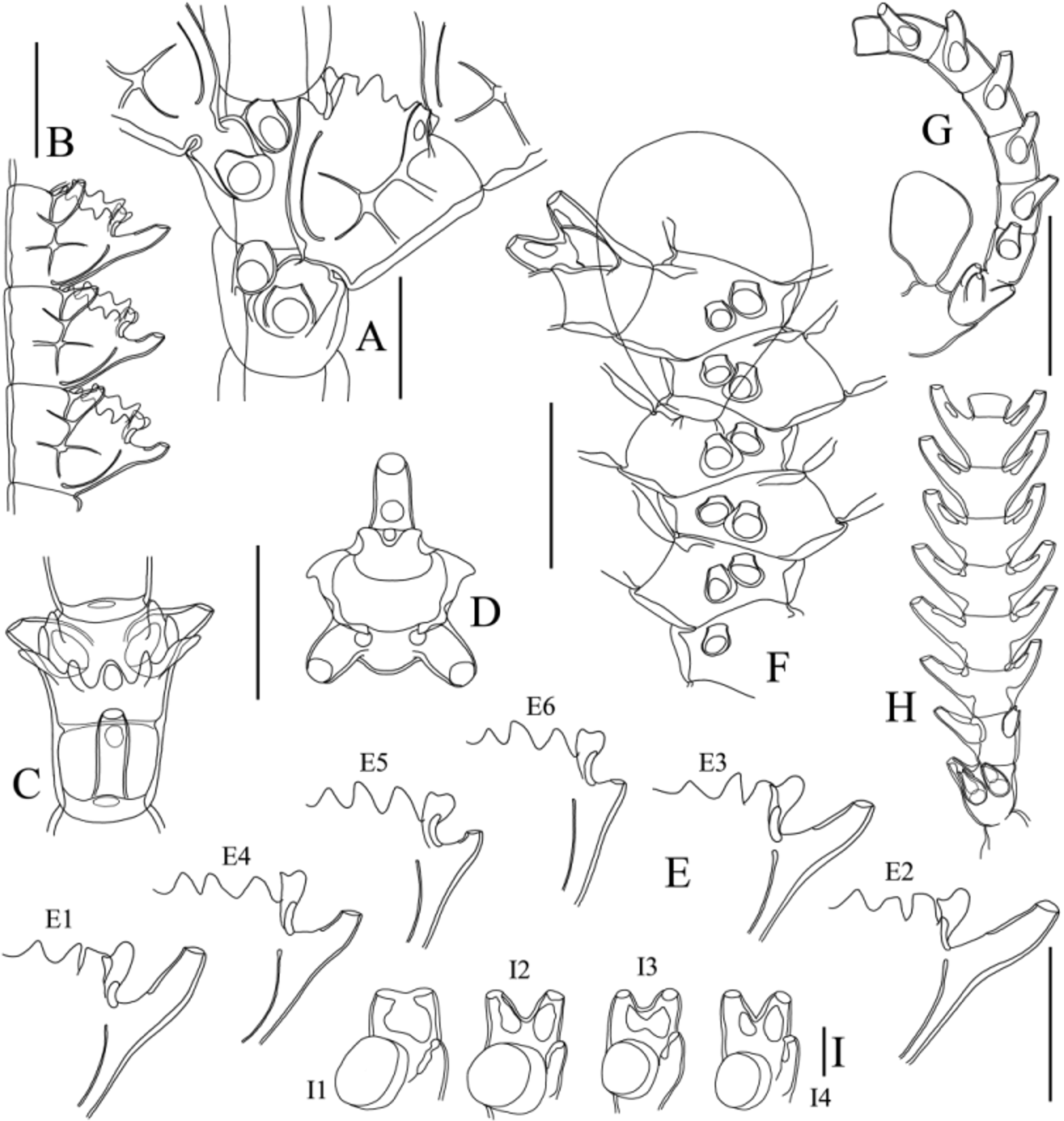