Diagnosis. Apical disc monobasal with 4 gonopores. Petals with equal columns of respiratory podia. Ambulacral plates beyond petals with pores running along the middle. Interambulacrum 5 with 11–12 plates between basicoronal 5 and aboral edge of periproct. Naked zone along oral midline developed and pitted. Phyllodes short and with few occluded plates. Peristome transverse and pentagonal. Bourrelets bulged outwards because of internal depression on the basicoronal plates. Periproct aboral, longitudinal, and narrow.

Petals short, not tapering, with roughly same L and W ( Figs. 7A, FView FIGURE 7; 8CView FIGURE 8); columns of respiratory podia equal, pore-pairs conjugated, inner pore round and outer pore elongated. Inner columns of pores straight or slightly bowed; outer columns straight or slightly bowed on posterior petals, and always bowed on anterior petals. Two to 3 primary tubercles per plate, at least one of them in poriferous zone. Ambulacra beyond petals increase 125–175% in relation to end-petal W; unipores in plates beyond petals: aboral plates wider than long (cubic in small specimens), pores on plate suture, in the middle of plate ( Fig. 8DView FIGURE 8), and oral ambulacral plates longer than wide, pores on middle of plate suture ( Fig. 8GView FIGURE 8). Phyllodes with unipores, short (usually 4 pores per half), with 1–2 (rarely 3) occluded plates, not sunken, broad, greatest W proximally ( Figs. 7C, HView FIGURE 7; 8F –IView FIGURE 8). Inner pores usually straight, outer pores piercing at an angle (i.e., phyllodes are narrower on the inside). Pore on last plate displaced inwards (i.e., not in an occluded plate). Ambulacral basicoronal plates pierced by large buccal pore and one per ambulacrum also pierced by a phyllopore in the sequence a, a, b, a, b from phyllode I –V ( Fig. 8FView FIGURE 8). Buccal pores near phyllodes, facing upwards. Phyllodes with 6–7 round sphaeridia in open pits near buccal pores ( Fig. 7CView FIGURE 7).

Etymology. Named after Cassandra of Troy, depicted in the myth of Hecuba and Priam’s family as the odd sibling. Kassandrina malayana  comb. nov. is an odd Cassidulus  . Spelled with an initial “K” so that the type species abbreviation can be distinguished from the old combination. Gender feminine.

Biological note. Females of K. florescens  comb. nov. have larger gonopores than the males. More specimens of K. malayana  comb. nov. are needed to check whether this slight sexual dimorphism is characteristic of the genus.

Note on type specimens of K. malayana  comb. nov. The original description of K. malayana  comb. nov. was very poor and Mortensen (1948b) mentioned only the H, even though he included data from two specimens within the bathymetric range. He later provided a thorough description in his Monograph of the Echinoidea ( Mortensen, 1948a) and mentioned that there were two specimens: a larger specimen (the type) and a smaller specimen he designated as the co-type (considered here as the P).

The morphology of the bourrelets, and the classification and composition of the new genus: A major difference between the families Cassidulidae  and Faujasiidae  is the shape of the bourrelets, which are round mounds in the former and tooth-like in the latter. However, there are intermediate states between these two forms, and some genera classified as faujasiids, such as Petalobrissus  and Australanthus  , do not always have tooth-like bourrelets. SRµCT images of the taxa described herein have shown that bourrelets in cassiduloids are built in different ways. Bourrelets seen externally as mounds may be formed by an accretion of stereom on the interambulacral basicoronal plates, as seen in Cassidulus  ( Fig. 10BView FIGURE 10), or by a depression on the interior surface of the basicoronal plate, which makes these plates project outwards ( Fig. 10D –FView FIGURE 10). The outer surface of the bourrelets of K. malayana  comb. nov. is similar to that of Cassidulus  (i.e., round mounds), and this may be the reason why this species has remained within the cassidulids rather than the faujasiids. However, our analyses show that the bourrelets of K. malayana  comb. nov. was formed by a depression on the basicoronal plate, which means this species does not belong in the genus Cassidulus  nor in any of the other extant cassiduloid genera sensu Kier (1962). We also looked extensively for an extinct genus whose diagnosis would include K. malayana  comb. nov.; however, we did not find a genus that conformed to the species description.

Amongst the valid cassiduloid genera sensu Kier (1962), only K. florescens  comb. nov. fits the description of the new genus. Although apparently common in the fossil record (based on the number of specimens deposited together in museum collections), there is not much information about this species in the literature. Kassandrina florescens  comb. nov. was described in the genus Cassidulus  , but Holmes (1999) implied that the genus classification could be wrong. Sullivan (2007) placed this genus in the genus Australanthus  although no justification was given. However, the type species of Australanthus  , A. longianus  , has tooth-like bourrelets rather than round mounds as in K. florescens  comb. nov.

Our analyses also showed that a depression is also present on the interior surface of the basicoronal plate of some faujasiids, such as Faujasia  and Hardouinia  , and it may be of phylogenetic importance. Cladistic analyses are necessary to test this hypothesis; until these are performed, we have decided to leave the genus unclassified (incertae familiae) instead of arbitrarily choosing the family that K. malayana  comb. nov. or K. florescens  comb. nov. are currently classified under (i.e., Cassidulidae  and Faujasiidae  , respectively). Also, because the uncertainty in the phylogenetic placement of this genus, we decided to provide a more detailed and broader diagnosis.

Taxonomic history of K. malayana  comb. nov. and genus-level relationships: Mortensen (1948a) described K. malayana  comb. nov. in the genus Procassidulus  , unaware that this genus had a tetrabasal apical disc. The periproct position and groove were also quite different, but Mortensen did not consider them of generic importance. Kier (1962) finally described the apical disc of Procassidulus lapiscancri  as tetrabasal, leading Mooi (1990b) to place “ P. malayanus  ” temporarily in the genus Cassidulus  . Suter (1994b) tested this classification in a phylogenetic framework and the preferred phylogeny revealed that “ C. malayanus  ” was sister taxon to the genera Rhyncholampas  and Cassidulus  . Suter (1994b) indicated that this species did not fit Kier’s description of the genus Cassidulus  . However, he emphasized the need to analyze the fossil species before attempting to reclassify it. Indeed, Cassidulus  contains many fossil species (see Lambert & Thiéry, 1909 –1925; Kier & Lawson, 1978; Kroh, 2010), but most of them have been mistakenly placed in this genus. In addition, morphological characters supporting the new genus are numerous, among them the longitudinal and aboral periproct, the absence of a lip above the periproct, equal a and b columns of respiratory podia, sphaeridia placed in open pits, internally depressed basicoronal plate, and phyllodes with occluded plates.

Comparison among genera. Kassandrina  gen. nov. differs from Cassidulus  , Rhyncholampas  and Paralampas  by having a longitudinal periproct; from Eurhodia  , Glossaster  and Oligopodia  by having a transverse peristome; from Petalobrissus  , Procassidulus  and Rhynchopygus  by having a monobasal apical disc; and from Australanthus  by having occluded plates in the phyllodes (vs. absence of occluded plates; inner pore is displaced from edge of plate), large sphaeridial pits by themselves or in double rows (vs. tiny sphaeridial pits in groups of 2– 4), pores of respiratory podia in the outer edge of the ambulacral plate at the end of the posterior petals (vs. porepairs migrate towards the middle of the plate at the end of the posterior petals), small expansion of the ambulacra W between the end of the petal and the ambitus (2–2.5 vs. 3–4.5 times the W at end-petal), and bulging, but not tooth-like phyllodes (vs. tooth-like phyllodes). Table 2 depicts the main morphological differences between the living cassiduloid species possessing a complete naked zone: C. caribaearum  , C. mitis  , C. infidus  , C. briareus  sp. nov., Rhyncholampas pacificus ( A. Agassiz, 1863)  , K. malayana  comb. nov., and Eurhodia relicta Mooi, 1990a  . 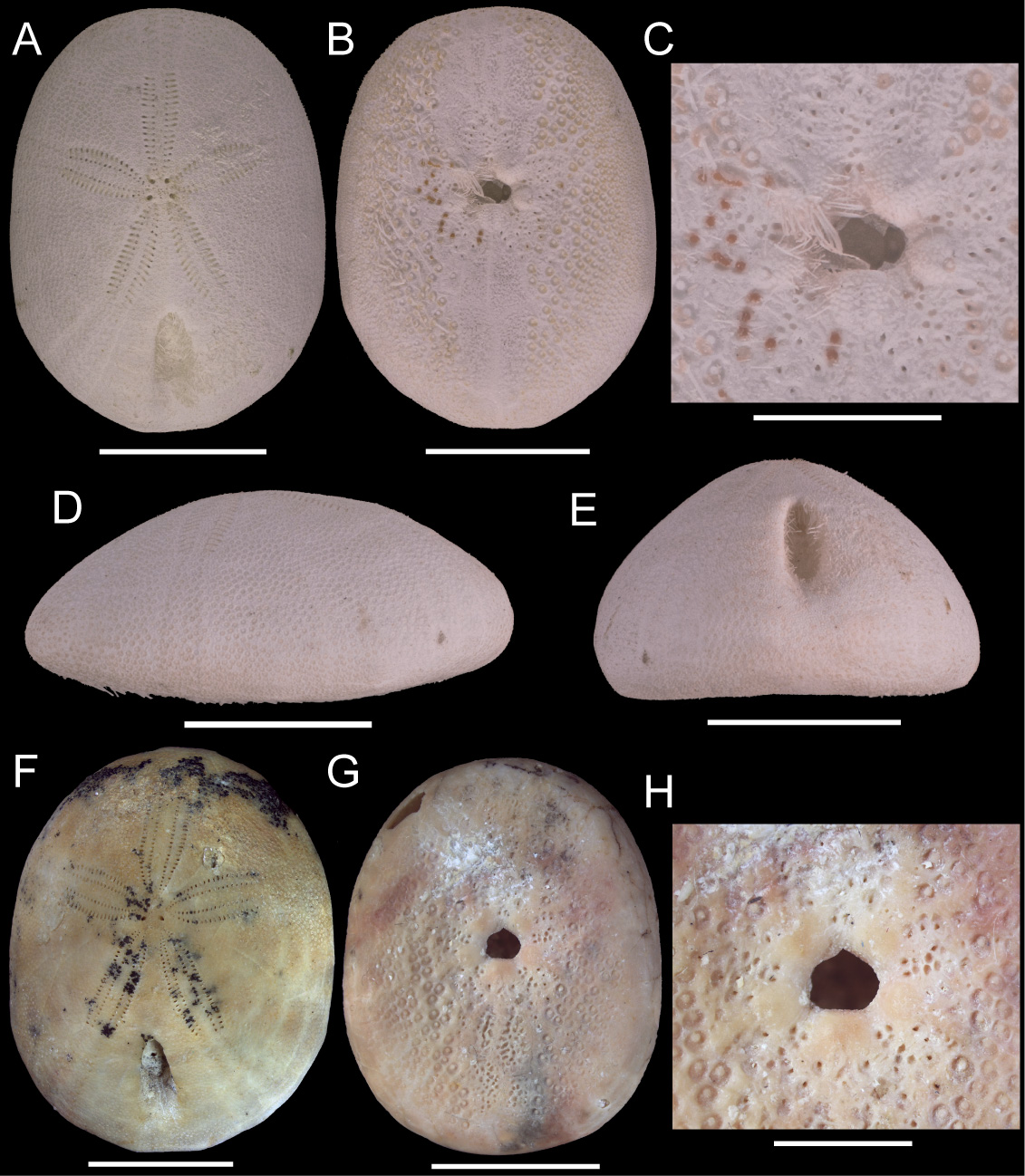 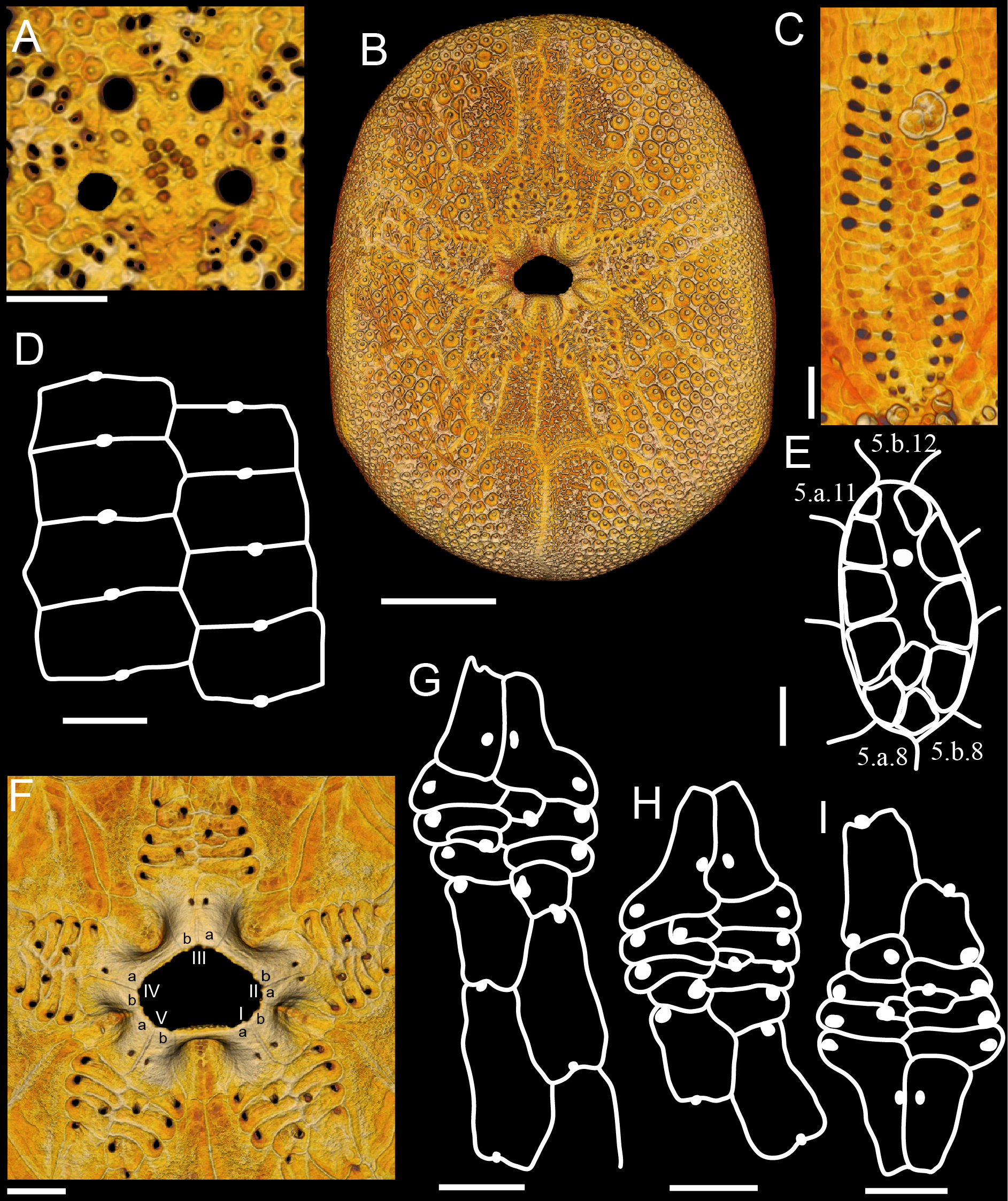 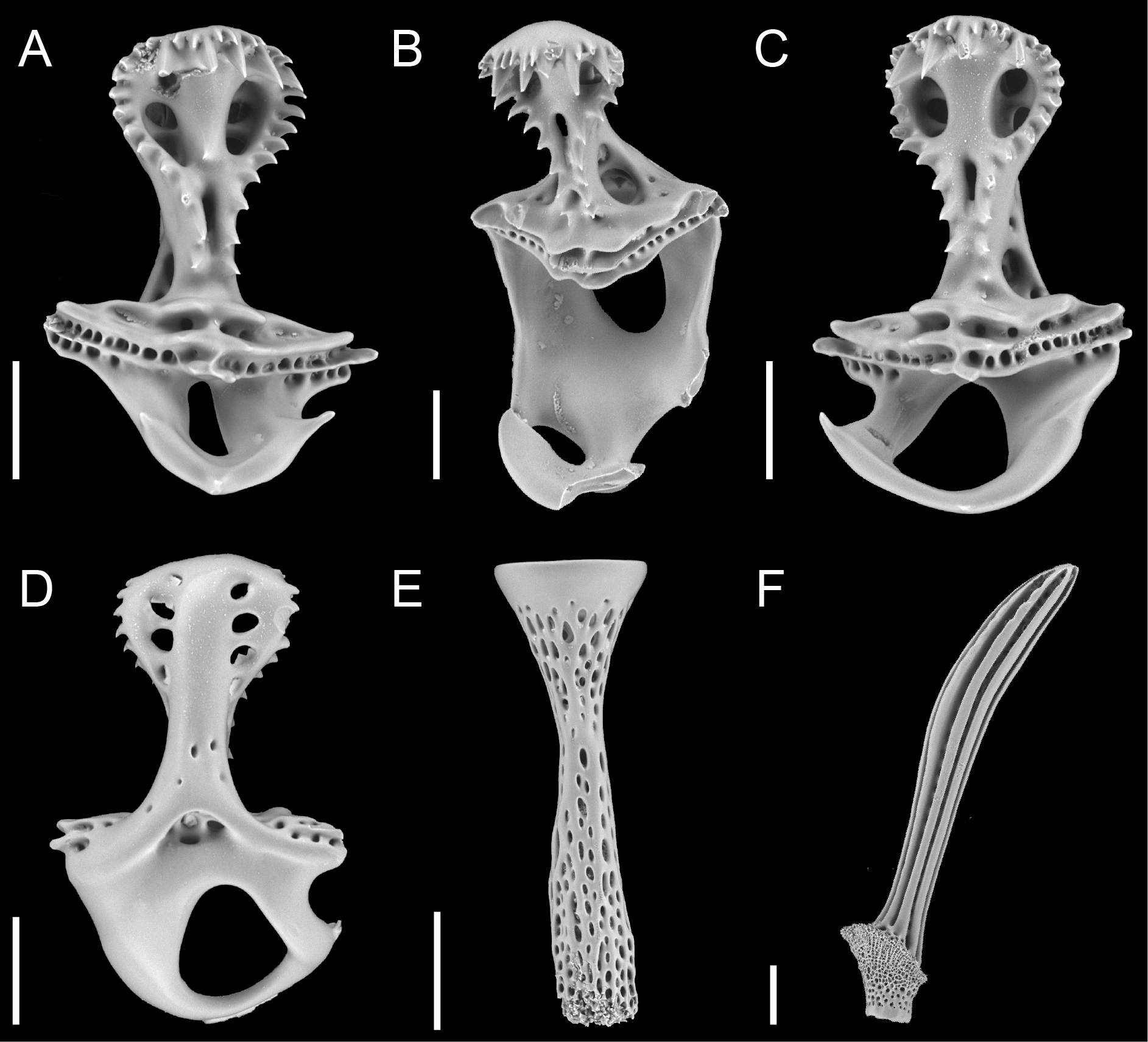 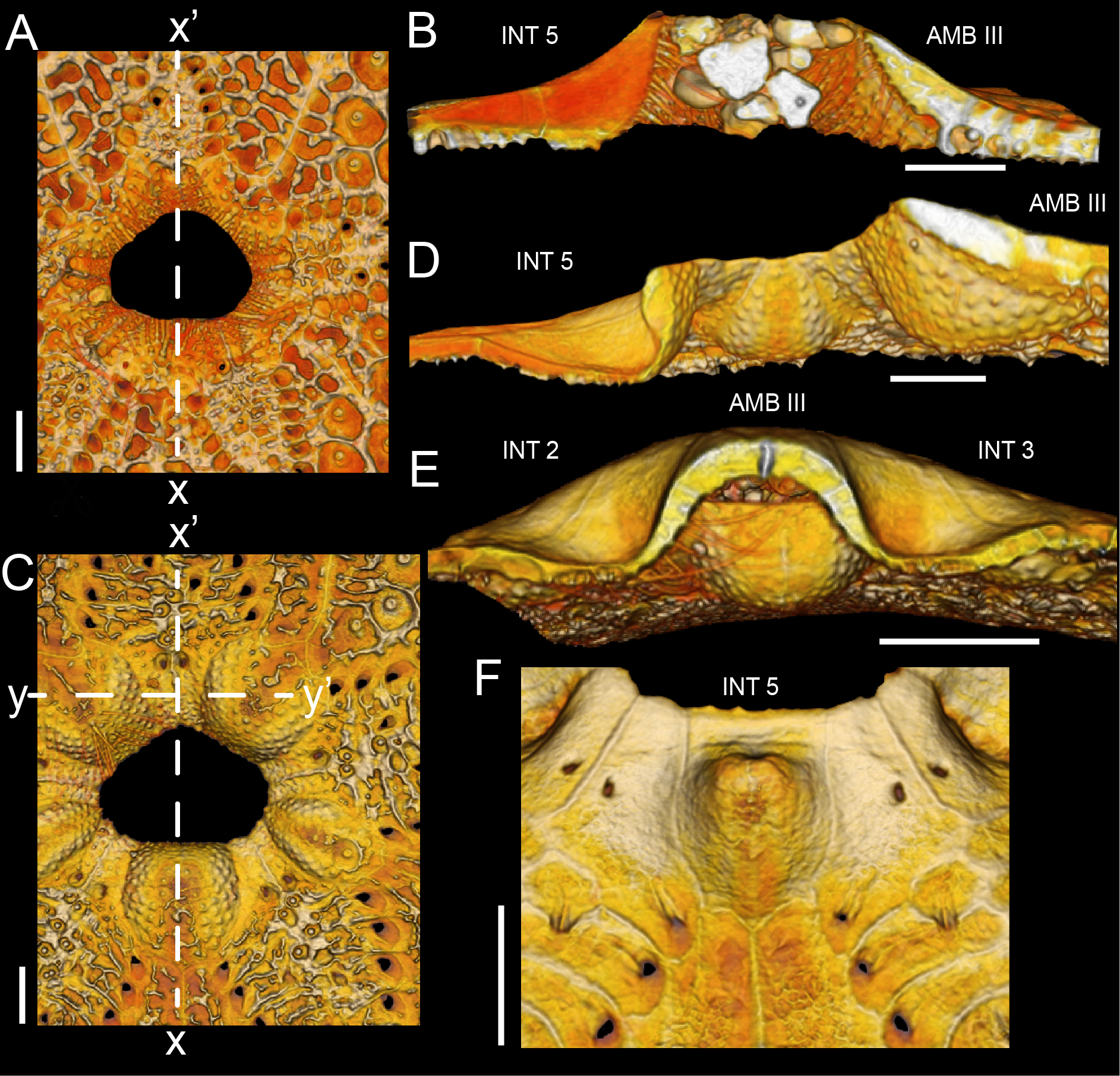