Description. Living specimens are purple colored with epibionts sparsely covering the tunic but after preservation, the tunic turns red ( Fig. 13 View FIGURE 13 ). The tunic is wrinkled. The animals attach on corals by the ventral margin and live in a vertical position with both siphons facing up, 1–3 m deep. The siphons are distant from each other with the oral siphon being slightly larger than the atrial, both lined with tubercles. Animals are commonly 2–3 cm in diameter and can reach up to 11.5 cm at maximum length including the tunic, but most specimens are 6–8 cm long. The thickness of the tunic is 1–3 mm. It has a white, reddish or purple interior. The body wall is uncolored and transparent around the gonadal and intestinal region, but when the material is freshly preserved, a red layer of tunic can be difficult to detach of the body wall. The siphons are red and densely surrounded by circular muscles. Longitudinal muscles organized into broad bands and radiate from the siphons down to the beginning of the gut on the left side and the gonad, on the right side, thus the enlarged intestinal pouch and long gonads are visible through the body wall ( Fig. 13B, C View FIGURE 13 ).

The lining of the siphons is red, without spinules, but with round white iridescent structures. The number of oral tentacles ranges from 18 to 33 (without counting very small ones), of four sizes. One large (11 cm long) individual had two very long ventral tentacles (1 cm), ~30 large and medium sizes and ~10 very thin and small tentacles. They are laterally flat, with a very large base. First order branches are long and placed along the posterior margin, with small second order ramifications, and occasionally minute third order branches ( Fig. 14A View FIGURE 14 ).

The peritubercle region is a deep V with a long dorsal tubercle with narrow U-shaped aperture ( Fig. 14B View FIGURE 14 ). The first dorsal folds in each side begin posterior to the peritubercle region and the languets of the dorsal lamina appear posterior to those folds. The languets are thin and long, 55–98. The length of the languets increases posteriorly and each languet lines up with the transverse vessels of the pharynx. The pharynx is white and presents six high folds per side with no fold overlap, the dorsal ones not so high as the others ( Fig. 13D View FIGURE 13 ). The vessel formula of a 4 cm long individual was (from right to left side—352 total):

Longitudinal vessels fray toward the base of the animal, making languets around the esophageal opening. Parastigmatic vessels are present and there are 4–7 stigmata per mesh ( Fig. 14F View FIGURE 14 ).

Fleshy large endocarps line both ascending and descending intestine, attached both to the body wall and intestine wall, but inside the secondary loop they are attached to the body wall only. The endocarps lining the ascending intestine are smaller and flatter. Very long laminar and irregular endocarps are observed on the top of each lobe on the left gonad but much smaller endocarps are observed on the right gonad. Four or five large fleshy endocarps, orange in recently preserved samples, are on the body wall, closely placed dorsally to the right gonad or much more centered along the middle longitudinal line ( Fig. 13E View FIGURE 13 , 14C View FIGURE 14 ).

The gut loop occupies the 2/3 of the left side of the body and is entirely attached to the body wall ( Fig. 13E View FIGURE 13 ). The intestine forms a closed primary loop, followed by an open secondary loop. The intestine is not isodiametric; a large pouch occupies the descending intestine and rectum. The anus is lobed ( Fig. 14D View FIGURE 14 ). The digestive gland is green or brown and form a main portion with two connections to the stomach and small extensions connect to the long esophagus ( Fig 14E View FIGURE 14 ).

Both gonads are elongated and formed by a sequence of lined lobes which are not well defined in some sections. Testis follicles are finger-like and ramified, laying on the atrial side of the lobes. The left gonad is sometimes hidden by the large hind intestine and have around 30 lobes. The right gonad is ventral and lies extremely close to the endostyle, but forms a closed curve in the posterior end towards the atrial siphon. There are also around 30 lobes ( Fig. 14C View FIGURE 14 ). Larger specimens do not have more gonadal lobes than smaller ones. The sperm duct is slightly shorter than the oviduct and open in the base of the atrial siphon ( Fig. 14E View FIGURE 14 ).

Remarks. Externally, this species resembles Pyura beta in the field due to coloration and distant siphons. Internally, the most significant difference between P. beta and P. vannamei is the enlarged intestine present only in P. vannamei , but the lobed anus, endocarps attached to the intestine wall and the large fleshy endocarps that lie dorsally next to the right gonad are also indicative of P. vannamei . Our specimens agree well with the description by Monniot (1994), but his Fig. 2A View FIGURE 2 shows a very shallow peritubercle region which is usually very deep and narrow in Panamanian specimens. 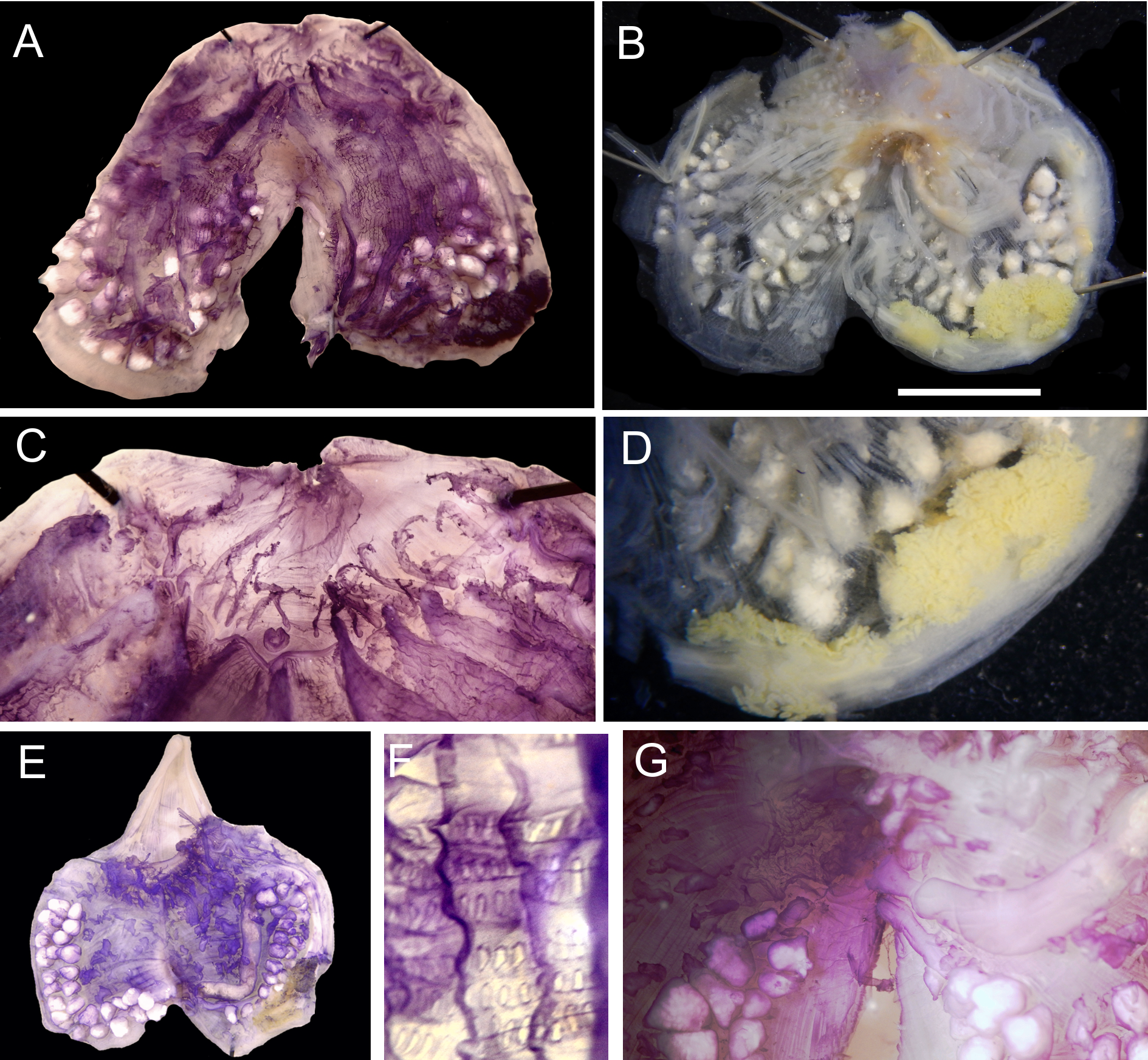 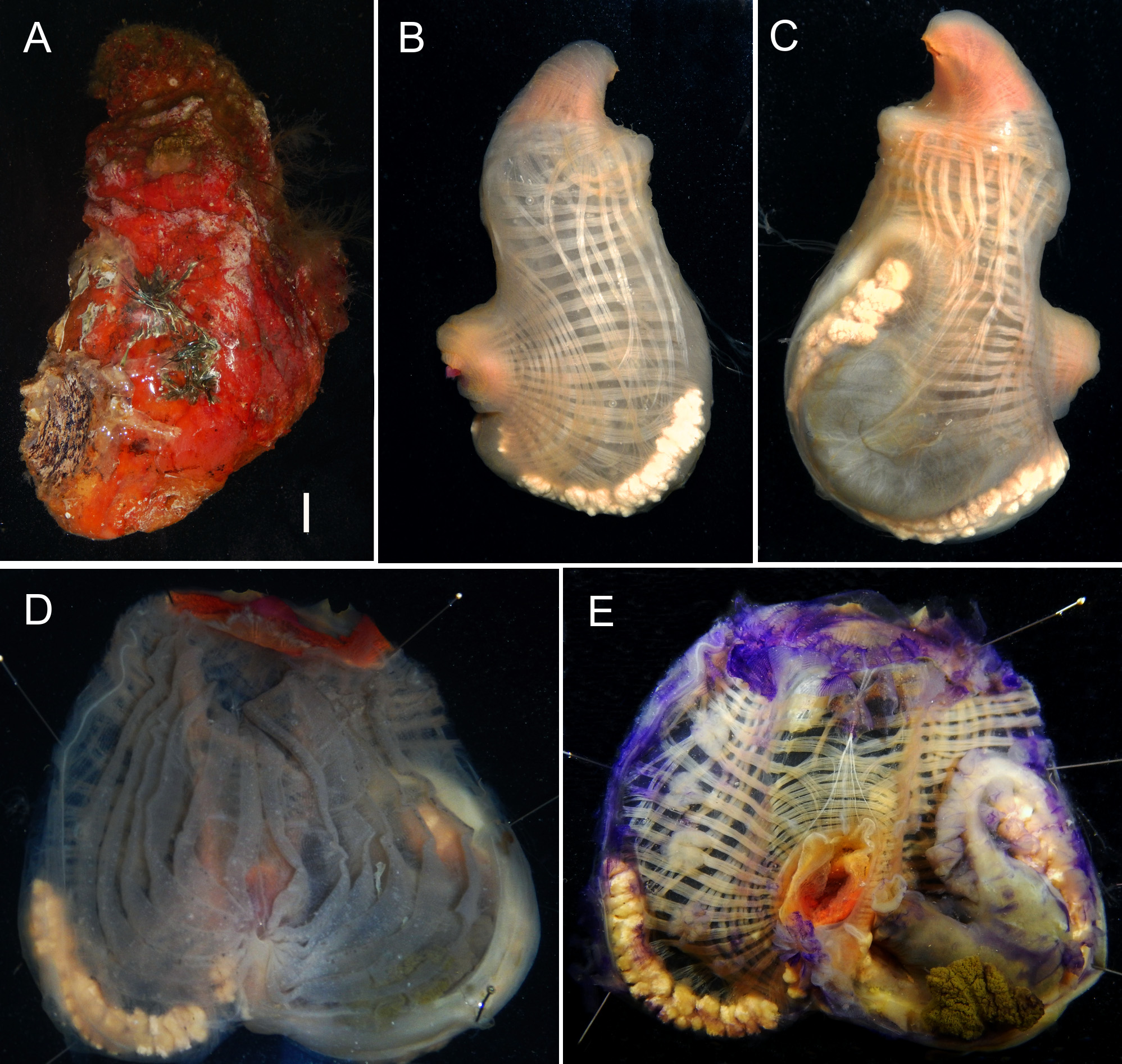 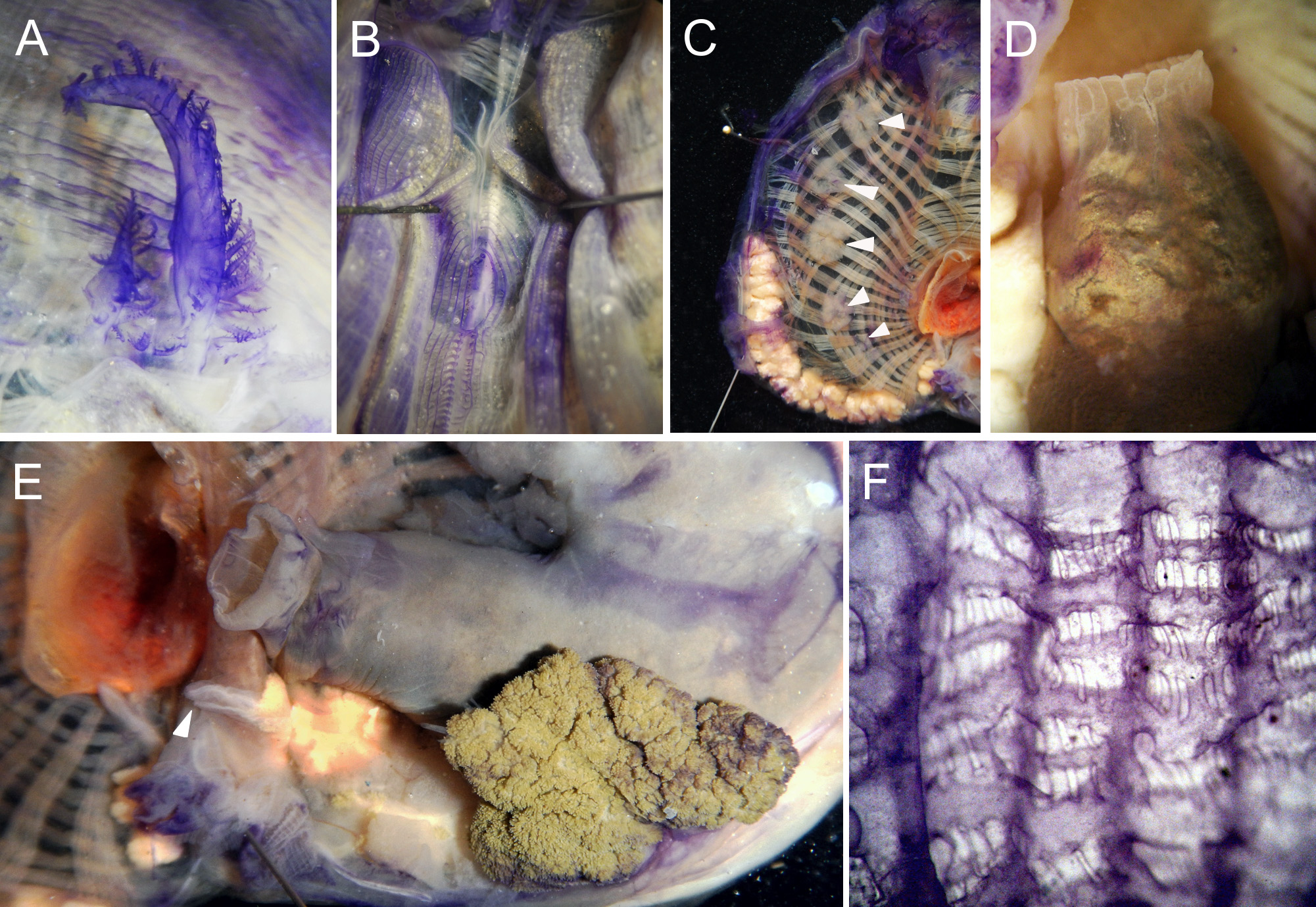