Color in life ( Fig. 5View FIGURE 5). Upper two-thirds of head brown with reddish hue anteriorly, greyish ventrally; upper half of body dark brown above pale yellowish white stripe extending from posterior part of upper jaw across lower cheek, lower opercle, and middle of pectoral-fin base and ending at caudal-fin base; lower half of head and body above this demarcation stripe grey to dark grey, usually with bluish hue on abdomen. A large black spot (ocellus), rimmed by a semicircular white mark below, on back at middle of the second dorsal fin, the spot extending into fin, where rimmed above in yellow; the black spot on back appears an open eye, sometimes with dark red anteriorly and posteriorly; another black spot larger than pupil dorsally at posterior end of caudal peduncle, rimmed below in yellow. Head with straight middorsal stripe from the tip of snout reaching origin of the first dorsal fin. Two narrow longitudinal yellow dorsolateral stripes on each side of head and body between middorsal and demarcation stripes. Upper stripe with U-shaped continuation at the front of snout from one side of body to the other side and continuing across upper part of eye and inner surface of orbit (only upper edge of orbit is visible through stripe) backwards to black ocellus, the stripe then continuing behind ocellus, more or less visible, along the top of caudal peduncle, where it ends at another black spot. Lower stripe extending from the upper lip through the lower part of eye, upper part of opercle, and upper pectoral-fin base running along lateral midline to the caudal peduncle where it is bended or separate, continuing as slightly lower positioned pale yellow mark on caudal-fin base. First dorsal fin with a reddish brown band, rimmed above in yellow, along base; a black ocellus, a little larger than pupil, broadly rimmed with yellow over first three spines and adjacent third membrane at midlevel of fin; an indistinct narrow reddish brown stripe on membranes between fourth and sixth spines; and an obvious orange-red streak or series of 2 or 3 elongate spots in outer half of first membrane. The second dorsal fin with a broad reddish brown band rimmed above in yellow, circumflexing black ocellus, along base; narrow yellow margin and an indistinct reddish brown submarginal band, more obvious on posterior half; an indistinct narrow reddish brown stripe in the middle of anterior half of fin; and yellow rear edge. Anal fin with pale grey to dark grey membranes and with narrow pale bluish white margin on posterior half and rear edge. Caudal fin with curved white bar at base, rest of fin with transparent membranes. Pectoral and pelvic fins with translucent membranes.

Distribution and habitat. Widespread from islands of the western Indian Ocean ( Seychelles, Reunion, Mayotte Island, Europa Island, and Madagascar), Chagos Archipelago, Maldives, and Andaman Sea east to the Indonesia, Malaysia (Tioman), Papua New Guinea, the Philippines, New Caledonia, Solomon Islands, Micronesia, and Fiji, north to Taiwan and southern Japan (Ryukyu and Yaeyama Islands), no positive records from Australia. The record from Fiji (easternmost record of the species) is based on material from USNM collected by Springer & team (e.g. USNM 236679, USNM 235950). Usually seen solitary hovering a short distance above bottom near base of coral reefs at depth of 3– 30 m. 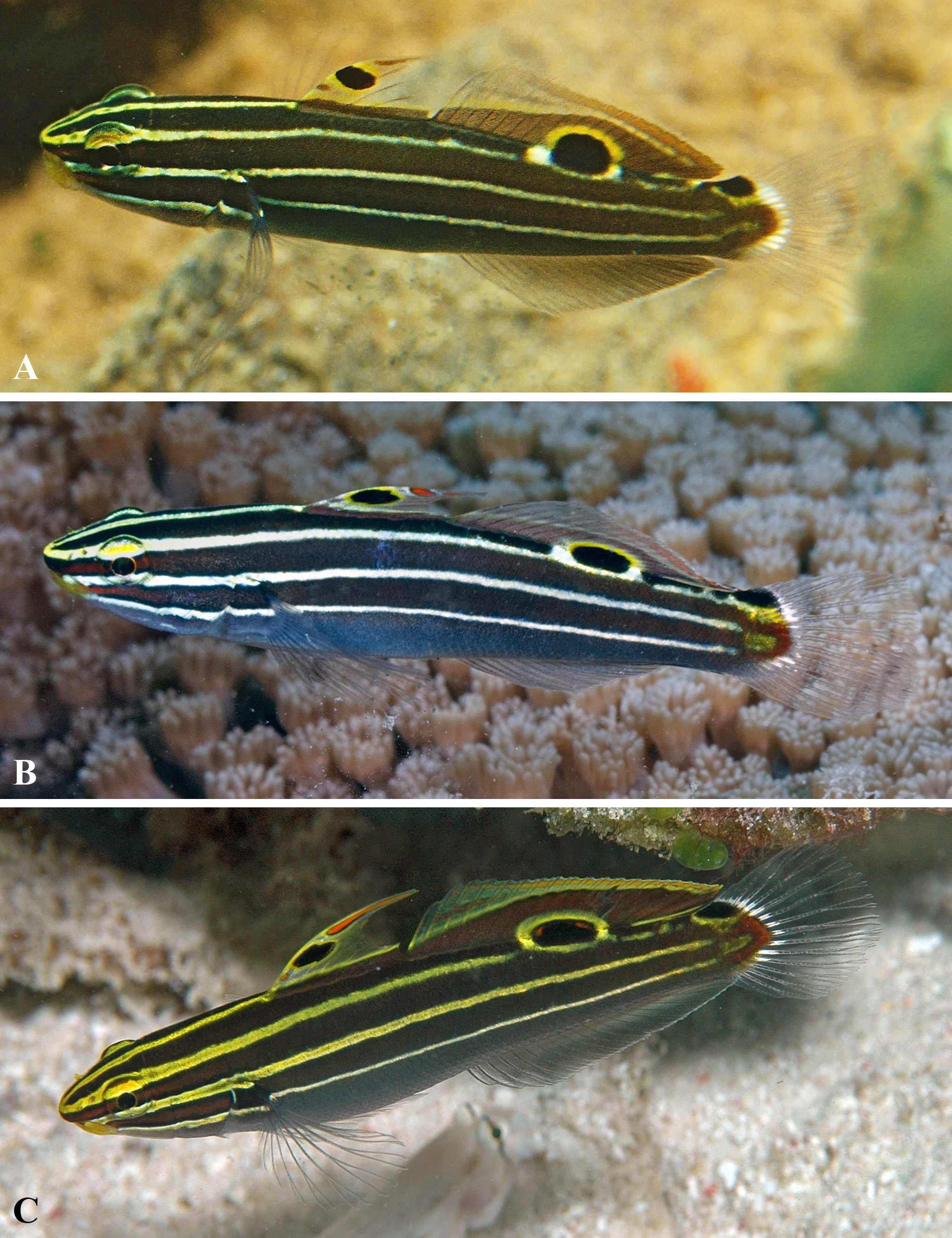