Diagnosis. This species can be distinguished from congeners on the basis of the lack of hair chaetae and cuticular papillation, and the detailed morphology of the cuticular penis sheaths. In comparison with its closest known relative, T. pseudogaster  , the new species is distinguished by its wider body at segment XI, its wider ental portions of the atria, its longer penis sheath, its lack of an outward-turned collar at the ental end of the penial tube, and its lower maximal number of preclitellar chaetae. In addition, the average COI distance between T. mackiei  n. sp. and T. pseudogaster  is 22.07% (see Kvist et al. 2010) and a total of 127 characteristic attributes (i.e., molecular synapomorphies; see Sarkar et al. 2002) separate the COI sequences of these species ( Kvist et al. 2010).

Etymology. Named after the esteemed polychaete systematist, Andrew (Andy) S.Y. Mackie, for his contributions to annelid systematics, and for his hospitality, generosity and aid during the first author’s collection of numerous naidids (from various localities in Wales in 2007), including T. pseudogaster  , which partly enabled the separation of the new species.

Distribution and habitat. Known from the southeast coast of Norway and west coast of Sweden, in fine sand and silt, as well as coarse sand and gravel; intertidal and shallow subtidal.

Remarks. Molecular data support that Tubificoides mackiei  and the north European T. pseudogaster  are closely related ( Kvist et al. 2010). The two taxa strongly resemble each other, both in general appearance and in some details of the chaetal morphology. In particular, Tubificoides mackiei  and T. pseudogaster  are similar in general body length from prostomium to segment XI, the lack of hair chaetae and cuticular papillation, and in the detailed morphology of dorsal chaetae ( Dahl 1960; Baker 1980; Takashima & Mawatari 1996). However, the two species can be distinguished on the basis of body width, e.g. using the width at segment X ( T. mackiei  seems to be about twice as wide as T. pseudogaster  in X [see Dahl 1960], although such a difference may depend on, or be exaggerated by, coverslip compression on a microscope slide), the shape of the atrium (wider ental portion in T. mackiei  ), and the maximal number of preclitellar, dorsal chaetae (the reported [up to] six chaetae per bundle in T. pseudogaster  [ Dahl 1960] are nowhere found in T. mackiei  ). Also, the shape and size of the penis sheath (shorter in T. pseudogaster  ), and the details of the penial tube (with an outward-turned collar at the ental portion in T. pseudogaster  ) differs between the taxa. It should be noted that, with regard to the detailed morphology of the chaetae, in particular the length of the upper teeth in the dorsal bundles, Dahl’s (1960) original description and Baker’s (1980) re-description of T. pseudogaster  report slightly different information. Dahl (1960) mentioned that the upper teeth in dorsal bundles are sometimes shorter than the lower teeth, whereas Baker (1980) suggested the opposite.

Dahl (1960) reported the following for T. pseudogaster  : "In segment 9 the intestinal walls are thickened dorsally and laterally with a glandular structure". These structures are indicated in the scientific name for the species (Gr. pseudēs meaning false, and Gr. gastēr meaning stomach). All of our slide-mounted, non-juvenile specimens of both T. pseudogaster  and T. mackiei  display a feature very similar to that detailed by Dahl (1960), yet it is difficult to discern if the structures are of digestive epithelial origin or chloragogenic cells, and whether they are directly related to the intestinal tract or free in the coelomic cavity. Regardless, because both species seem to have this structure, it may be a synapomorphy for them (and perhaps additional, closely related taxa).

On the penis morphology of T. pseudogaster  . Historically, delineations of species within Tubificoides  have relied heavily on the shape and size of penis sheaths ( Brinkhurst & Baker 1979; Brinkhurst 1981, 1985, 1986; Baker 1983; Helgasson & Erséus 1987); this character also seems to separate T. mackiei  from T. pseudogaster  . Although the resolution of Dahl’s (1960) figure showing the penis sheath of T. pseudogaster  is less than ideal, the language in her description is clear. Dahl (1960), when describing the penis sheath, states that: "Its length is about twice its breadth" and that "Distally the penial tube has an outward turned collar". In addition, the figures supporting Baker’s (1980) and Takashima & Mawatari’s (1996) re-descriptions of the species clearly show a "cone-shaped" penis sheath, with an outward turn at the ental end [referred to as "ental flange" in Takashima & Mawatari (1996)]. In order to aid future morphological identifications of T. pseudogaster  (see also above regarding the DNA barcodes for this species) and owing to the low quality of the figures presented by Dahl (1960), we here present a photograph of the penis sheath from the lectotype of T. pseudogaster  ( Fig. 3DView FIGURE 3). The structure is morphologically compatible with the detailed description by Dahl (1960), as well as both the text and figures presented in Baker’s (1980) re-description, and we hope that these new photographs, in combination with the genetic data, will mediate the difficulty of delimiting species that are morphologically similar to T. pseudogaster  . 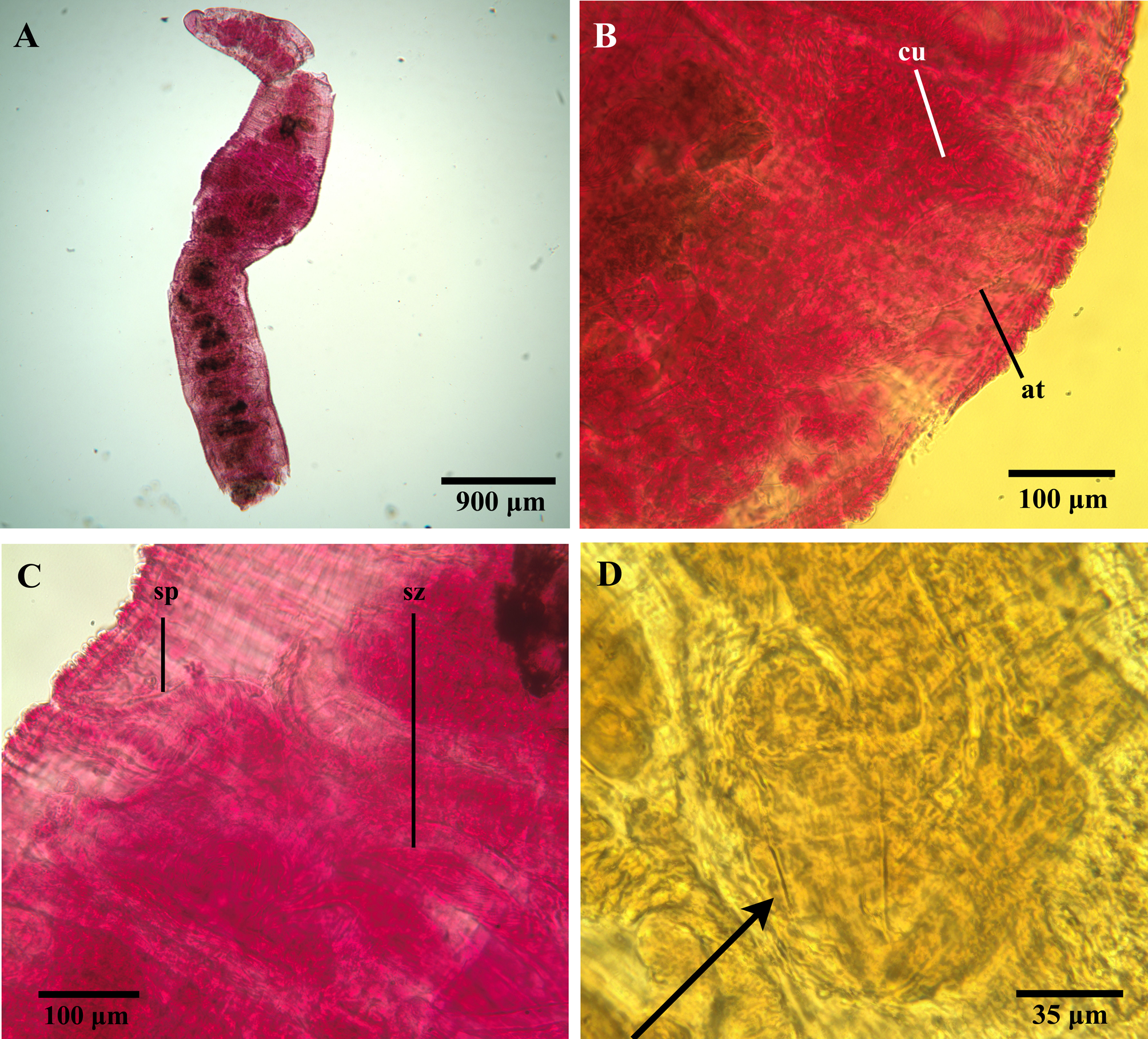