Male. Coloration. Brown, frons vertex and occiput darker brown, mouthparts and legs paler than thorax, the base of femur 3 slightly darkened, wing unicolorous, hyaline, pale yellowish-brown, knob of haltere dark. Head. Antennal flagellomere 4, Fig. 20View FIGURE 20 C. Palpomere 3 of maxillary palpus with apicomesial extension, with 6 apically expanded curved sensilla; palpomere 4 with parasegment. Thorax. Pleural setosity pattern similar to M. bicuspis  , Fig. 1View FIGURE 1 E: anepisternum setose, with 69 setae; anterior basalare non-setose; preepisternum 2 setose, with 25 setae; laterotergite setose, with ca. 25 setae; episternum 3 setose, with 11 setae. Wing. Length 2.2 mm. Hypopygium ( Figs 20View FIGURE 20 A –B). Sternite 9 extending posteriorly to halfway between the base of gonocoxa and the base of gonostylus, lateral margin anteriorly fused with gonocoxa, posteriorly confluent with convex posterior margin, which is notched medially, anterior margin deeply incised, the setae similar to adjacent ventral setae of gonocoxa. Parastylar lobe well exposed in ventral view, long and narrow, directed obliquely anteriad, with two apical setae. Paraapodemal lobe distinct and exposed in ventral view, not shown in Fig. 20View FIGURE 20 B, similar to M. parilis  , Fig. 18View FIGURE 18 A. The dorsal mesial margin of gonocoxa convex in the middle, apically with a narrow lobe which is setose at the mesial margin. Two juxtagonostylar setae present, a megaseta and a normal seta, both arising at the apex of a common basal body which is almost as long as the megaseta, the megaseta rather straight in Fig. 20View FIGURE 20 A but on the other side (which is not illustrated) it is sigmoid. Gonostylus laterally flattened with the dorsal and ventral surfaces rather narrow, in lateral view the gonostylus apparently slightly longer than high, but the character cannot be seen precisely in the single specimen; setae on dorsal, lateral and ventral surfaces mostly similar to ventral hairs of gonocoxa but becoming longer towards the apex; at the apical margin of gonostylus with a mesially directed megaseta on its dorsal part, but apparently no additional setae diverging from the other setosity except for a couple of very long setae apicodorsally; the mesial surface of gonostylus non-setose but with very long microtrichia. Tegmen triangular, without distinct lateral shoulders. Hypoproct posteriorly extending to the level of the base of gonostylus, with ca. 15 scattered ventral setae on each half. Cerci medially united and apically separated by a deep notch, but this character cannot be seen very clearly in the single specimen.

Female. The single specimen is in rather bad condition, e.g. leg 3 is missing from both sides. Similar to male. Antennal flagellomere 4 in the single specimen, seen in ventral view, with its length/width ratio 1.3.

Discussion. The hypopygium of M. orthacantha  perhaps resembles that of M. evexa  most closely but differs by having sternite 9 anterolaterally fused with the gonocoxa, by having a long parastylar lobe instead of a small flat plate, by lacking a row of long hairs along the ventral mesial margin of gonostylus, and by having the apical lobe at the dorsal mesial margin of gonocoxa much longer and parallel-sided, not short-triangular. M. orthacantha  differs from all similar species except for M. sicula  by the long antennal flagellomeres, flagellomere 4 being about twice as long as broad instead of as long as or only slightly longer than broad, and by its large size with the wing length over 2 mm.

The identification of the female on the basis of the known characters may be difficult. The basal bodies of the setae on tergite 9 are narrower and longer than in any other females in the present material, but the difference from such species as M. ctenophora  , M. taedia  and M. explicans  is not great. M. orthacantha  differs from the other species in the present material in which the female is known by its large size, wing length 2.5 mm. The undescribed female of M. sicula  can be expected to be similar in the size, and these two species appear to have the antennal flagellomeres longer than in other species.

Other material. 1 female with same data as holotype (in NRM). 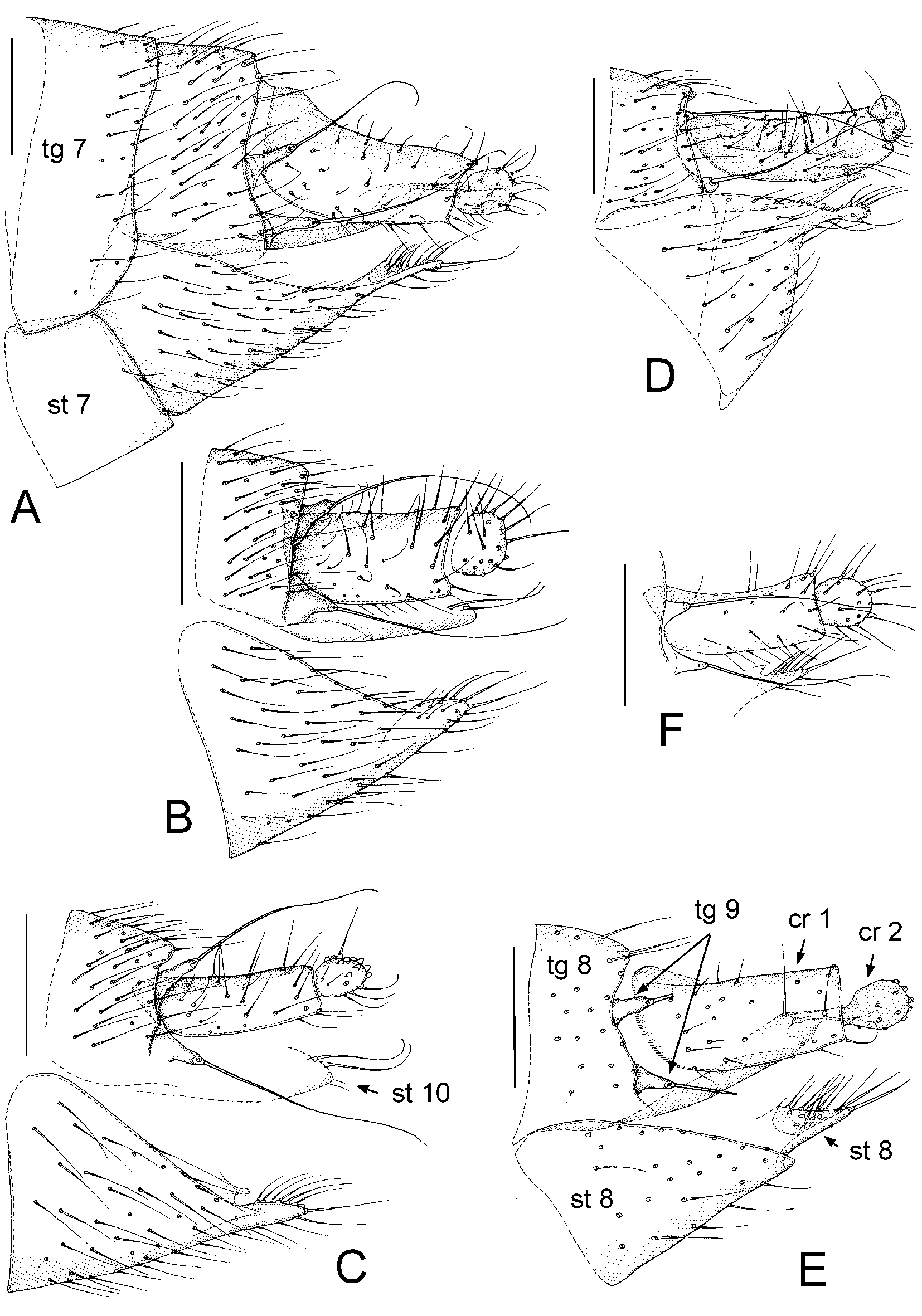 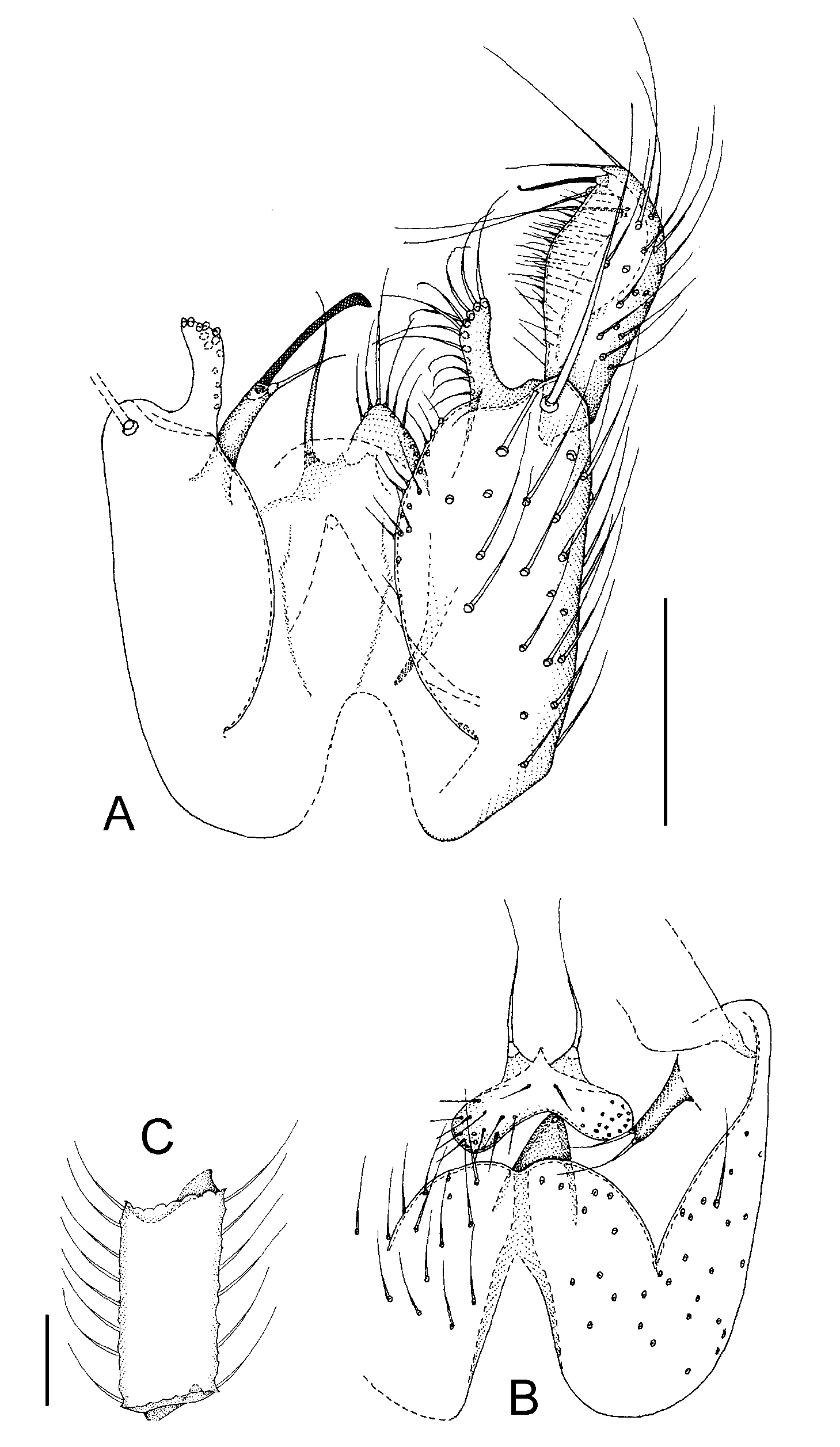