Male. Coloration. The specimens are probably strongly faded, but it seems that the coloration was blackish or greyish-brown with the following pale (yellowish) parts: face, mouthparts, antennal scape and pedicel, ventral parts of pleura, stem of haltere and all of legs, except for the extreme base of coxa 3 and base and apex of femur 3. The wings, mounted directly from dry specimens, are unicolorous pale greyish-brown. Head. Antennal flagellomere 4, Fig. 22View FIGURE 22 C. Palpomere 3 of maxillary palpus with apicomesial extension, with 5 apically expanded curved sensilla; palpomere 4 with parasegment. Thorax. Pleural setosity pattern similar to M. bicuspis  , Fig. 1View FIGURE 1 E: anepisternum setose, with 48–55 setae; anterior basalare non-setose; preepisternum 2 setose, with 16–17 setae, the number in the holotype uncertain; laterotergite setose, with ca. 21–32 setae; episternum 3 setose, with ca. 4–8 setae. Wing. Length 1.5 mm. Hypopygium ( Figs 22View FIGURE 22 A, B). Sternite 9 large, extending posteriorly just over halfway between the base of gonocoxa and the base of gonostylus, laterally sharply delimited, posterior margin slightly concave, anterior margin deeply notched, the setae similar to adjacent ventral setae of gonocoxa except for a couple of stronger setae on both sides near posterior margin. Parastylar lobe exposed in ventral view, large, directed transversely mesad, with a constriction separating a broader basal and narrower apical part, with one seta at the apex and ca. four setae more basally on the apical part. Paraapodemal lobe distinct and exposed in ventral view of hypopygium, not shown in Fig. 22View FIGURE 22 B, similar to M. parilis  , Fig. 18View FIGURE 18 A. Dorsal mesial margin of gonocoxa simple, evenly curved, at apical margin with a large lobe with a few setae on basomesial margin and four setae apically. One juxtagonostylar seta present: a sigmoid megaseta arising from a basal body, which is nearly as long as the megaseta. Gonostylus flattened, in lateral view broader than long with a very narrow base, the lateral setae similar to the ventral setae of gonocoxa, at the apical margin, on mesial side, with 5–6 apically angulate strong setae or megasetae, the two most ventral arising from a small lobe, the mesial surface of gonostylus non-setose but partly covered by long microtrichia. Tegmen narrowly triangular, with weak but distinct lateral shoulders. Hypoproct posteriorly extending to the level of the basal part of the gonostylus, rather narrow, with ca. 20 scattered ventral setae. Cerci unusually small, mesially fused but apically separated by a notch which is as deep as the width of the free part of cercus.

Discussion. M. pentacantha  resembles M. hamulata  , M. bicuspis  , M. parilis  , M. evexa  , M. orthacantha  , M. sicula  and M. pacifica  , but differs from all of these by the megasetae at the apical margin of gonostylus which are five or six in number instead of only one or two, or instead of two or three stronger pale setae as in M. hamulata  , and by having only the juxtagonostylar megaseta present, the thinner seta being absent. The parastylar lobe of M. pentacantha  , with its distinct basal and apical parts, is similar to that of M. hamulata  , M. bicuspis  and M. parilis  but differs from all three by having the parts of the parastylar lobe inflated, not flat, and by having the basal part much larger than in the other species; M. hamulata  also differs by having the basal part of the parastylar lobe composed of more than one lobe. The apical lobe on the dorsal side of the gonocoxa is more lateral than in the other similar species. Otherwise the lobe resembles that of M. orthacantha  , M. sicula  and M. pacifica  . It differs from the former e.g. by having the setae on the mesial margin of the lobe divided into an apical and a more basal group instead of covering the whole mesial margin, and from the two latter by having the lobe non-branched or not divided into two sub-lobes. 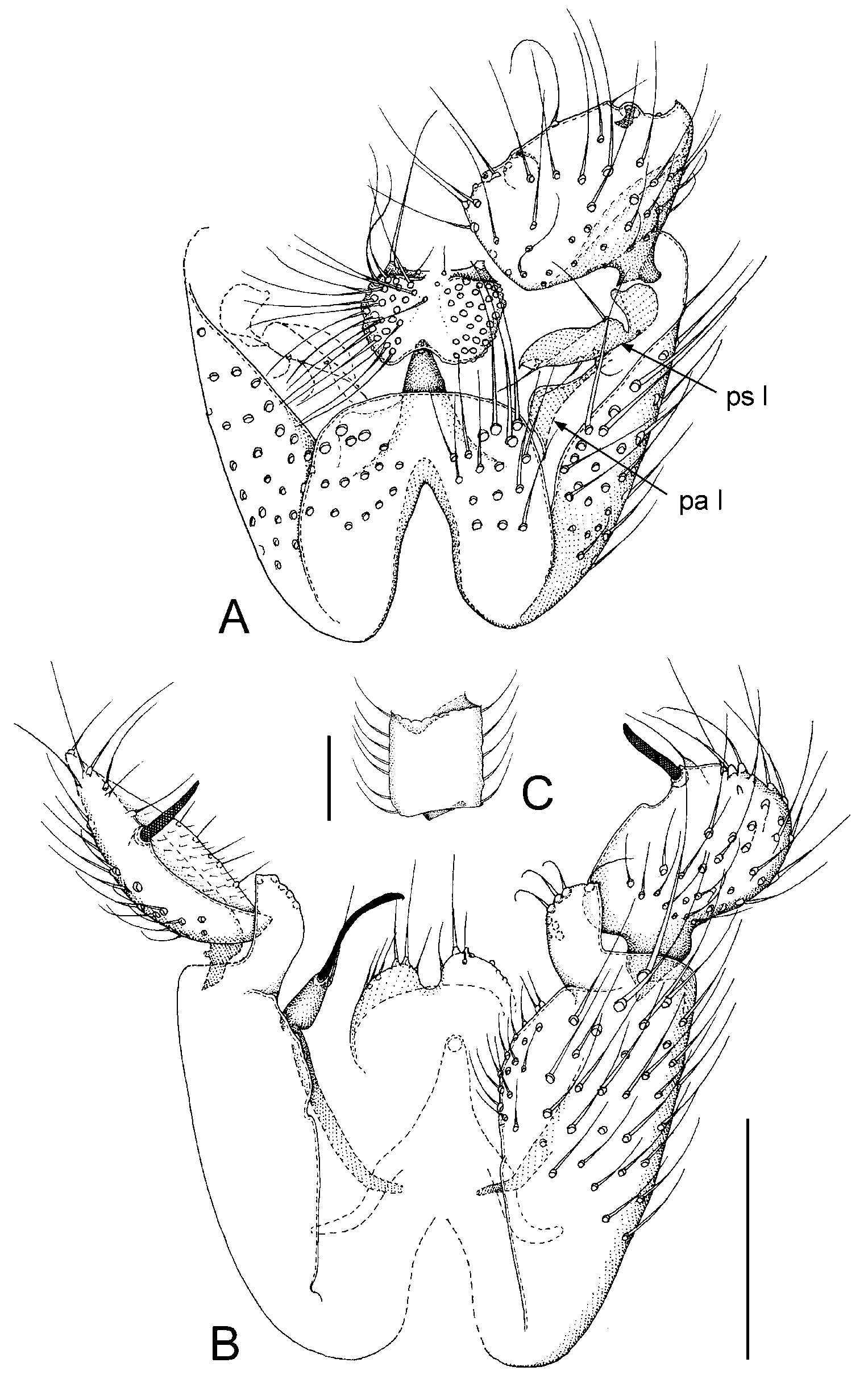 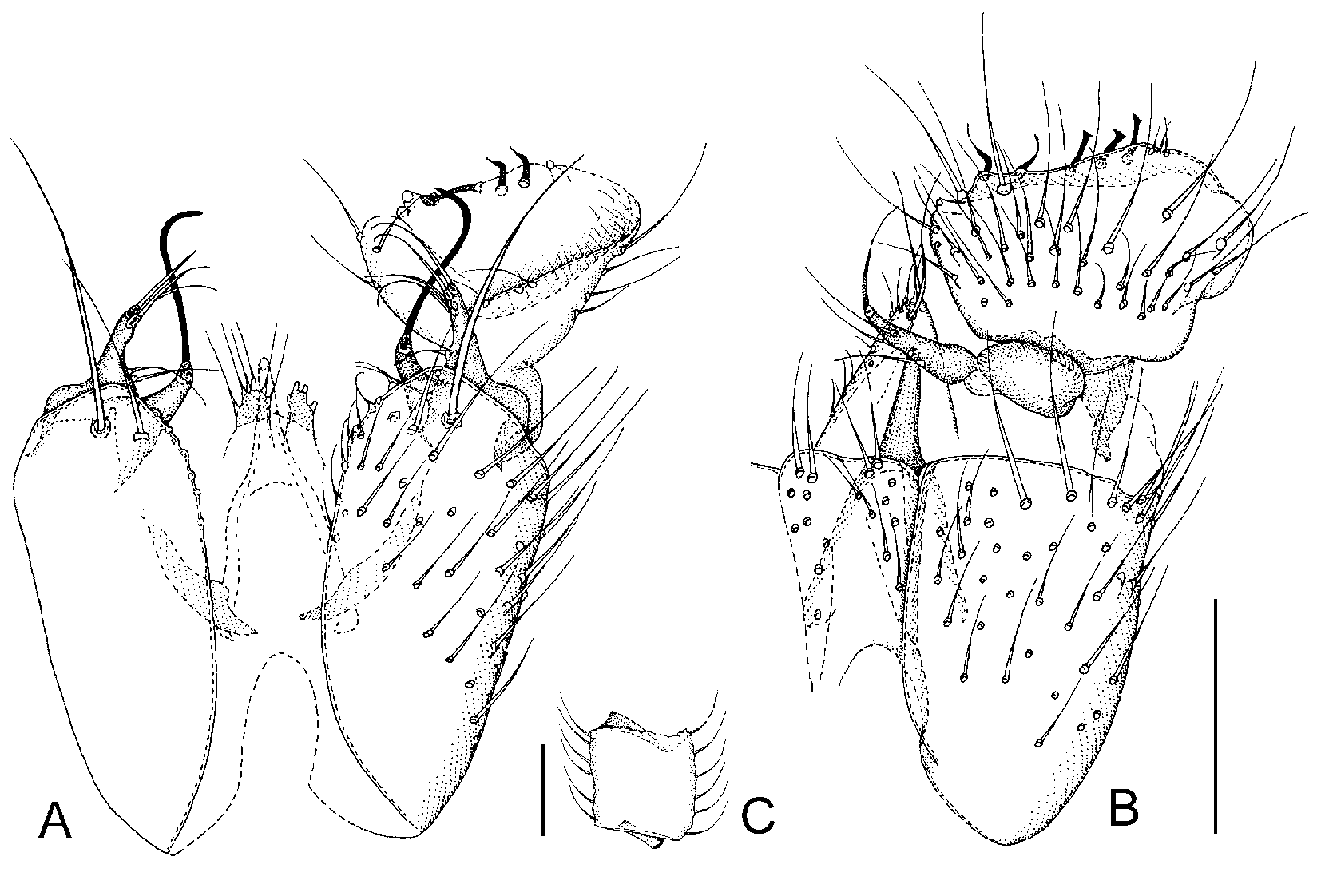