Male. Coloration. The apparently strongly faded coloration is pale yellowish-brown, antennal flagellum, posterior parts of thorax, including episternum 3, and a small basal patch posteriorly on hind coxa and the abdominal tergites darker brown. Head. Antennal flagellomere 4, Fig. 15View FIGURE 15 D. Palpomere 3 of maxillary palpus with apicomesial extension, with 5 apically expanded curved sensilla; palpomere 4 with parasegment. Thorax. Anepisternum setose, with 45–56 setae; anterior basalare non-setose; preepisternum 2 setose, with 19–21 setae; laterotergite non-setose; episternum 3 setose, with 9–15 setae. Wing. Length 1.3–1.5 mm. Hypopygium ( Figs 15View FIGURE 15 A –C). Sternite 9 extending halfway between the base of gonocoxa and the base of gonostylus, laterally sharply delimited, posterior margin slightly notched, anterior margin deeply incised, setae similar to ventral setae of gonocoxa except for a transverse row of the three or four most posterior setae which are much stronger. Parastylar lobe exposed, flat, with 3 transversely directed setae anteriorly. Paraapodemal lobe exposed in ventral view. The dorsal mesial margin of gonocoxa simple except for a small setose subapical lobe. Apically and laterally of the latter, the gonocoxa is produced as a narrow setose lobe. Two juxtagonostylar setae present, a long slightly curved megaseta and a slightly shorter normal seta, both arising from a basal body, which is nearly half the length of the megaseta. Gonostylus elongate-oval, with two small lobes on the mesial margin, one just basal of the middle, the other very inconspicuous one forming a basomesial corner of the gonostylus; with moderately long setae ventrally, dorsally with a row of short curved submarginal setae mesially on the apical half of gonostylus and with a row of three rather conspicuous longer setae on the opposite lateral side, otherwise almost non-setose but with rather conspicuous microtrichia. Tegmen narrowly triangular, with weakly expressed shoulders. Hypoproct extending posteriorly to the level of the apical half of gonocoxa, with ca. 8 ventral setae on each side in an indistinct mesial row. Cerci separate.

Discussion. M. gemella  is similar to M. orientalis Senior-White  as interpreted by Edwards (1928), known from Sri Lanka. It differs by the shorter gonostylus, which is less than twice as long as broad instead of being over three times as long as broad, and by having the lobes on the mesial margin of the gonostylus smaller and more basally situated, the more basal one being at the basomesial corner and the other just basal of the middle; in M. orientalis  the first is about one-third of the gonostylar length from the base and the second is distinctly in the apical half. Furthermore, in M. orientalis  there are three very long setae apically on the gonostylus. The setae are about one third of the gonostylar length and possibly correspond to the rather short dorsal apicolateral setae of M. gemella  as shown in Figs 15View FIGURE 15 B and C. The apicodorsal structure of the gonocoxa in the two species is very similar except that the two lobes seem to be a little stronger in M. orientalis  . M. gemella  differs from all the species of the Australasian region by its non-setose laterotergite. The hypopygium resembles that of M. tricuspis  , but is distinguished e.g. by lacking the three huge setae apically on the much longer gonostylus, by lacking the two strong transverse setae mesially on the apicodorsal lobe of gonocoxa and by having the setae posteriorly on tergite 9 much stronger than the more anterior ones.

Paratypes. 1 male with same data as holotype (in MNHN). 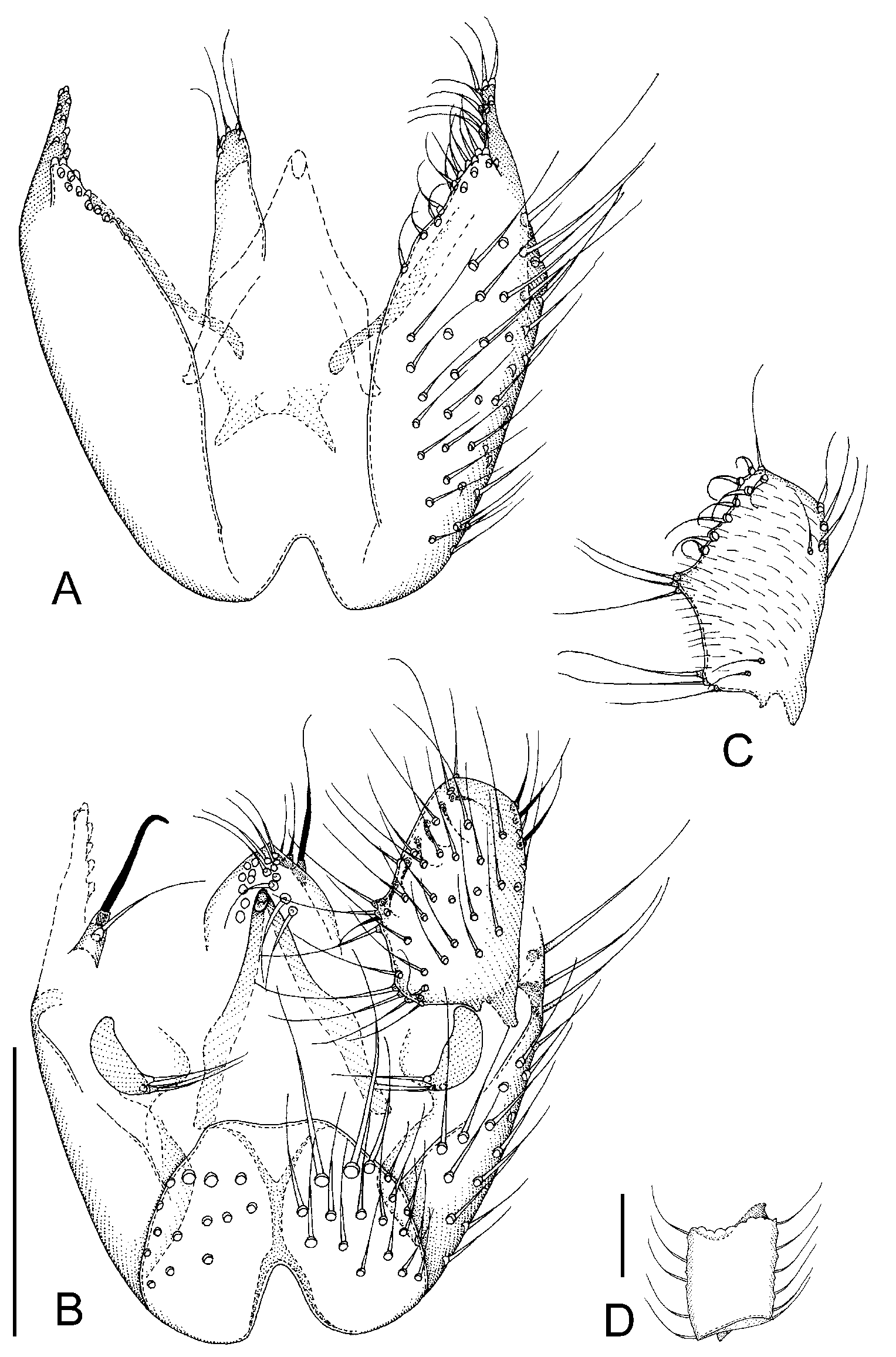