Description. Shell small (to 1.3 mm), translation of Golikov & Sirenko (1980: 107–108), the translation of the Russian original description was kindly provided by Vyacheslav Palchevskiy (University of Southern California, Los Angeles, California, USA): “The shell is small, almost disk-like with thin walls and with 2.5 slightly convex whorls separated by a deeply impressed suture. The last whorl makes a small concave platform near the suture. The upper part of the whorl has a weakly convex, smooth slope towards the periphery, restricted by two raised keels, which border the slit near the outer edge of the aperture. The base of the shell under the keels is moderately convex but forms a deep depression in the region of the wide umbilicus. The diameter of the last whorl is 1.45 × as wide as high and 1.3 × greater than the height of the shell.

The surface of the shell is milky-white though in one of the paratypes, the color of the shell is slightly yellow. The axial sculpture of the shell consists only of thin, non-contrasted growth lines. Only in the region of the umbilicus, there are slightly separated, barely visible (only under magnification) wrinkles. The spiral sculpture is absent except for separate, non-distinct, unshaped lines.

The aperture is round-oval, essentially shifted in respect to the axis of the shell; its height is 3 / 4 of the shell’s height. The outer apertural lip has a slight angle in the upper part near the parietal wall of the whorl and slopes smoothly towards a deep and narrow slit; the region where the keels frame the slit is slightly raised. The inner lip near the columella is strongly curved outside making the narrow fold, and during the transition towards the base of the shell, forms a smooth, circular and dull angle.”

Differential diagnosis. Anatoma obtusata (Golikov & Gublin, 1978)  from the boreal north Pacific is more globular in overall shell shape, has a teleoconch I of 0.875–1 whorls, and a very narrow umbilicus. Thieleella baxteri ( McLean, 1984)  from the Northeastern Pacific shares the discoidal shell shape in smaller specimens, but has strong and sharp axial lamellae on shoulder and base, crossed by much finer spiral lines. Thieleella kelseyi ( Dall, 1905)  from the northeastern Pacific has an overall more turreted shell shape, a protoconch with reticulate sculpture and fine axial cords on shoulder and base crossed by finer spiral lines.

Remarks. Five specimens were collected, and reference is made to at least one paratype, but it is unclear whether only one or more paratypes were designated. The holotype was illustrated by Kantor & Syosev (2006) and is strongly decalcified. Multiple attempts at obtaining the specimen on loan failed. The specimens from Alaska are considered conspecific as they agree as well as possible with the original illustration, the subsequent photograph of the holotype as well as with the original description. The overall shape of the specimens, the strong funiculus, the very weak sculpture in some of the examples examined, and the distribution in the boreal Pacific all support the identification of the Alaskan specimens as A. disciformis  . The original illustration shows a specimen with a very rounded aperture, whereas some of the specimens shown here have a rather more angular D-shaped aperture. The latter condition is encountered in specimens with a broken lower adumbilical portion of the peristome, hence, is an artifact of no taxonomic significance. As in Anatomidae  , juvenile specimens are more depressed than older ones as shown by the ontogenetic series in Figure 12View FIGURE 12 [see also Zelaya & Geiger 2007, figs 18–40, for ontogenetic series of A. euglypta (Pelseneer, 1903)  ]. The shared protoconch and early teleoconch features support that the specimens belong to the same species. 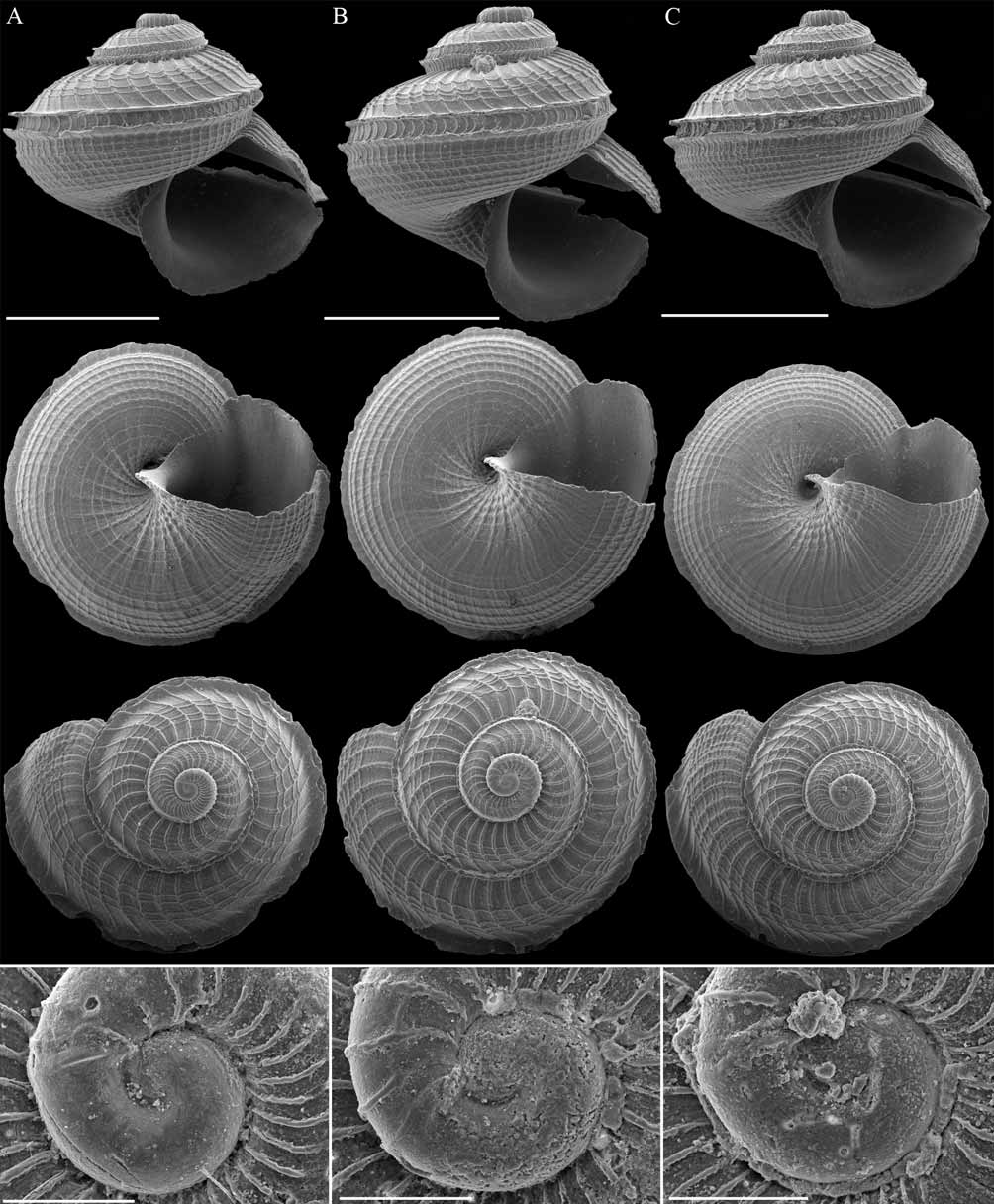 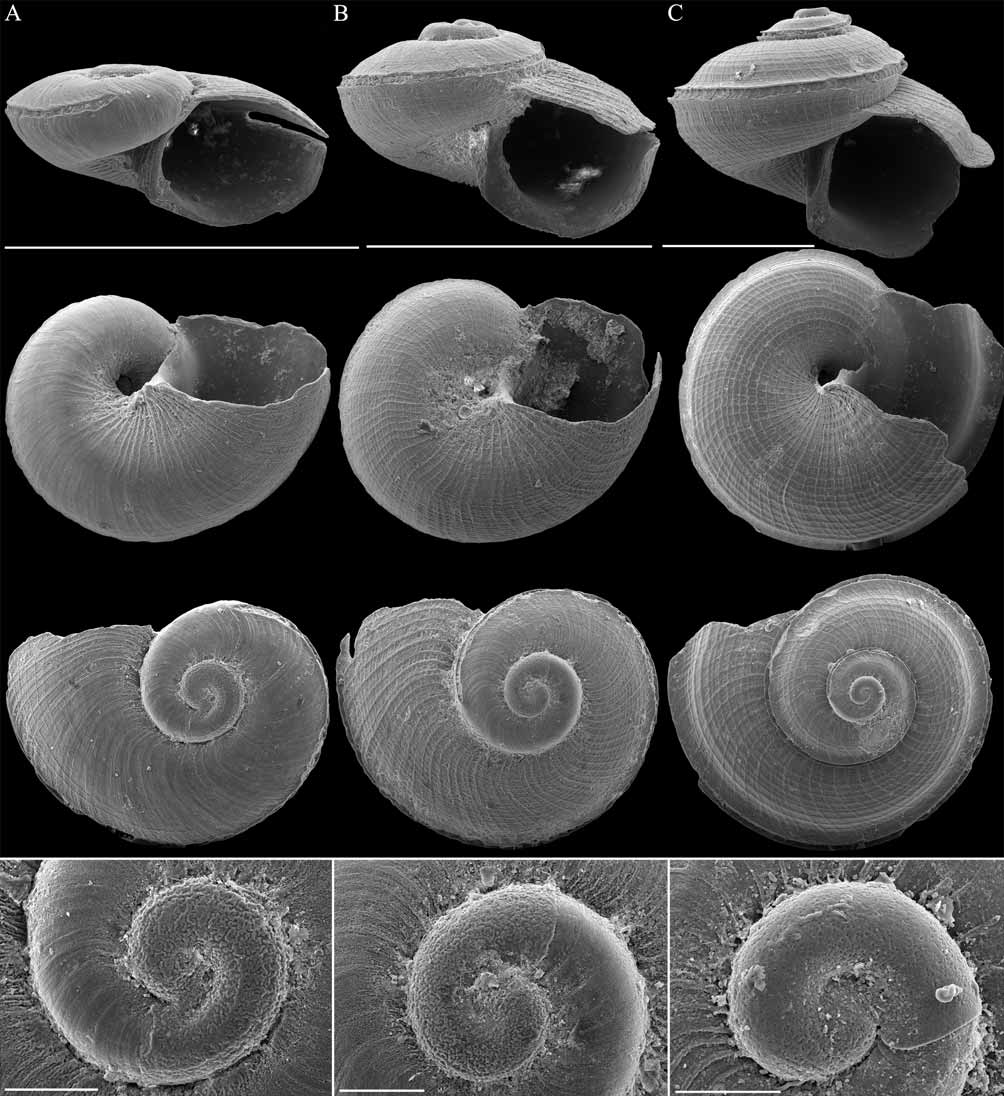