Pectoral fins large and broadly rounded, originating just behind gills. Anterior margin of pectoral fin mostly straight, 0.8–0.9 as long as pectoral length, extending to a lateral apex. Margin from lateral apex to posterior-most lobe slightly concave. Posterior lobe broadly rounded. Pectoral inner margin about one half of pectoral length, convex, and with a small lobe near pectoral base.

Remarks.— Although similar to other northwestern Atlantic angel sharks, S. david  can be distinguished from the other three species known from the area as follows. Its eye-spiracle distance in eye diameter is 1.5–2.1 times in specimens larger than 599 mm TL (0.8–1.3 in those 245–302 mm), while in S. dumeril  is always less than 1.5 (Compagno et al., 2005). This ratio may be also larger than 1.5 in the two recently described Gulf of Mexico species (Castro-Aguirre et al., 2006). Also, its mid-dorsal line lacks thorns or enlarged, sharp, pointed dermal denticles, as in S. heteroptera  and S. mexicana  , while S. dumeril  has a mid-dorsal row of hooked thorns.

Colonello et al. (2007) suggested the occurrence of pectoral spines on mature males, which might be widespread within the order Squatiniformes  . The only adult male available (787 mm TL) of S. david  indeed has a patch of spines on its pectoral fin edges, a trait associated to sexual dimorphism. In the numerous previously examined (Bigelow and Schroeder, 1948; Colonello et al., 2007; Baremore, 2010) morphometric differences between males and females, no mention has been made of nostril width. This tear-shaped cavity is wider, almost two-fold in adult males of S. david  compared to females. We speculate that males may have a larger nostril area enhancing their capability to detect female reproductive

cues as has already been suggested by Arif (2011) for Scyliorhinus canicula  .

Stelbrink et al. (2010) included in a comprehensive worldwide species coverage, corresponding to world major geographic regions, four recovered Squatina  clades. After including sequences from S. david  , all reconstructions yielded the same results, with the new species being nested inside the American branch. All phylogenetic methods used in this study consistently recover S. david  as the sister species of the branch, including the Brazilian S. guggenheim  and S. occulta  . According to our time-calibrated phylogeny, the branch including all South and North American species originated at some point between mid-Oligocene to late-Miocene (29.3 – 8.6 mya). Our result displaces the earliest boundary of such splitting several million years before the hypothesis of Stelbrink et al. (2010). In accordance with our results, the 95 HPD credible interval of the time of origin of S. david  spans from 10.7 to 2.7 mya, somewhere between mid- Miocene to Pliocene ( Fig. 6View Fig. 6).

The branching arrangement of American Squatina  exhibits a distinguishable biogeographic pattern, with the most basal species being restricted to the southeastern Pacific, one clade exclusive to South America, and a third being totally North American ( Fig. 7View Fig. 7). Unfortunately, there are no available molecular data for the two endemic Gulf of Mexico species ( S. mexicana  and S. heteroptera  ), information that eventually may concur with the south-north grouping hypothesis. Geologic and paleoclimatic events during the Miocene-Pliocene associated with the rising of the Central American isthmus and its collision with northwestern South America (Coates and Obando, 1996; Coates et al., 2004) could have deeply influenced the evolutionary history of American angel sharks. A thorough review including the two Gulf of Mexico species and additional genes are necessary in order to have a better understanding of the evolutionary history of this American clade of elasmobranchs.

Etymology.— To be used as a noun in apposition. To honor the son of the first author, David  Acero, who passed away on March 7, 2011. Pronunciation of david  : dahveed. 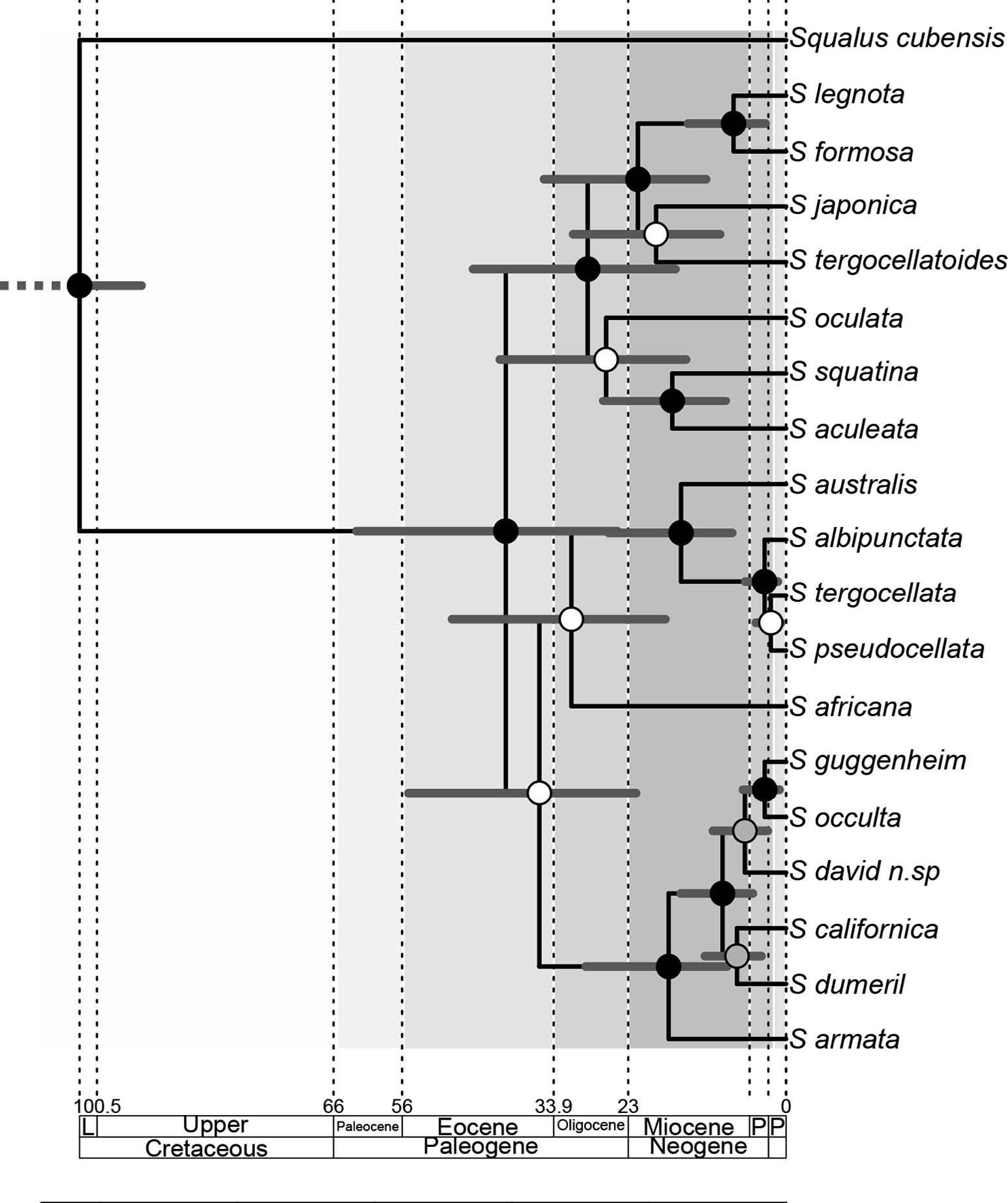