Ecology. The holotype was collected from under $leaves of Camarina#; the paratypes were encountered in $tropical woods under leaves.#

Distribution. Known only from the type and paratype localities.

Remarks. I cannot improve on Chamberlin s drawing (1943, fig. 163) of the caudal segments, but his illustration of the gonopodal telopodite of the holotype (1943, fig. 164), a simple, uncinate blade (a $hook#) without a prefemoral process, is wholly inadequate and misleading. While the telopodite lacks secondary projections, it possesses a distal flange on the caudal margin, and there is a minute prefemoral process consisting of two branches (figs. 3­4); the paratype prefemoral process consists of three branches, the anterior one redivided. Thus in this short distance of only 45 mi (72 km) there is seemingly significant variation in the structure of the prefemoral process, and the paratype s telopodite is more upright and bends abruptly, though still possessing a distocaudal flange. This difference may justify specific recognition of the paratypes, but more material and further study is needed to determine this definitely. However, the division of the prefemoral process becomes significant when it is noted that the structure in the Texas species, some 800 mi (1,280 km) to the north in Kendall County, is similarly divided into two ultra minute, acuminate banches ( Shelley 2003, figs. 19­20), basically the configuration in the paratype of M. mundus   minus the caudal branch. Likewise, the telopodite in the Texas species appears to be a simple, uncinate $hook# under low magnification, but high power reveals that it curves more strongly and is structurally complex, with a side branch, the presumed solenomere, and a divided and redivided tip. Consequently, the basic gonopodal pattern in both species is a simple, curvilinear, blade­like telopodite and divided prefemoral process. The affinities of the Texas species therefore appear to lie with M. mundus   , and both are at the low end of the generic size spectrum, being about 3 mm in total length. Innumerable additional species of Myrmecodesmus   probably await discovery in Texas and Mexico, so while we are likely only beginning to catalog the genus, we may be seeing the basis for delineating one $species group# that ranges at least from central Veracruz to the vicinity of San Antonio, Texas & minute forms with the aforementioned gonopodal pattern in which there may be telopodal elaborations and the caudal or possibly the anterior prefemoral branch may be lost. While the trend in diplopodology is not to recognize species groups taxonomically, it should be noted that the name, Eirenyma Chamberlin, 1943   , is available to denote a subgeneric entity if a future student decides such is warranted. 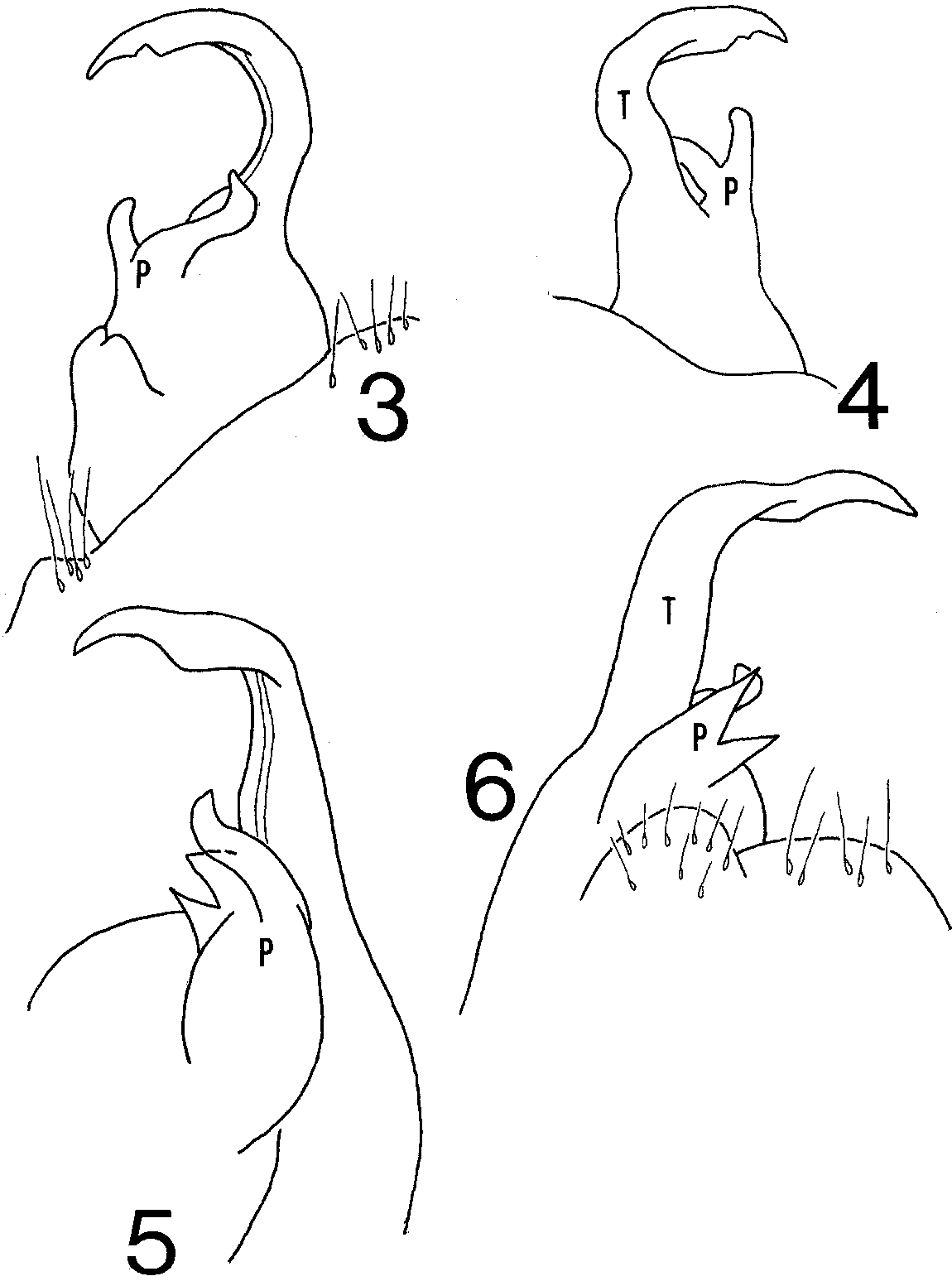