Remarks. The present material is mainly characterized by its very peculiar coplanar colony, with straight stems and branches, and much long, articulated hydrophores. Similar specimens, possessing collinear internodes, were found by Hartlaub (1905) (as H. flexile Allman, 1888  ) in material from Punta Arenas, Chile. Long primary hydrophores were mentioned and/or figured by both Hartlaub (1905) (p. 613, fig. K3a) and Ralph (1958) (p. 335, fig. 11L). They were thought to belong to aberrant colonies, as stated by Vervoort & Watson (2003). Until more material is examined, it is difficult to say if these long hydrophores appear after mechanical breakage and a subsequent regeneration step.

The occurrence of two sympatric morphotypes of H. cf. delicatulum  in the present collection raises the question of the morphological variability in this taxon, and its specific limitation. Coughtrey (1876) erected his new species for “very delicate”, monosiphonic, sterile specimens of a haleciid hydroid from Dunedin, New Zealand. Ralph (1958) examined material from several North and South Island localities and always found “erect monosiphonic stems with loose irregular branching”, whose female gonothecae were “more or less oval in general outline, with two distinct peaks arising from the narrow sides at the distal end”.

Schuchert (2005) gave the first accurate illustration of the female gonotheca of this species (p. 629, fig. 12B). I have had the opportunity to examine his specimen from Wellington (microslide MNHG INVE 26669). The exclusively monosiphonic stems are morphologically in agreement with the description provided by Ralph (1958), and the gonothecae clearly exhibit two prominent “ears” flanking the aperture. The gonothecae are 1335–1360 µm long, 760–790 µm wide, and contain ca. 20–22 small, rounded eggs (diameter 90–120 µm).

Ralph (1958), upon examination of types of H. gracile Bale, 1888  , H. parvulum Bale, 1888  , and H. flexile Allman, 1888  , concluded that all three species were synonyms of H. delicatulum  . Previously, Bale (1888, 1894) himself did not exclude the possibility that his two species could be conspecific, and Billard (1908, 1910) recognized H. gracile  as a junior synonym of H. flexile  , an opinion later on shared by Bale (1915). However, both Billard (1908) and Ralph (1958) based their conclusions exclusively on characters of the trophosome, since the syntype of Allman’s (1888) species was devoid of female gonothecae, the latter being now recognized as essential for an accurate identification of Halecium  species (see Schuchert 2005).

Additionally, the female gonothecae of both H. gracile  and H. parvulum  , as figured by Bale (1888), do not possess the characteristic perisarc projections flanking their aperture, as found in specimens from New Zealand, and Ralph (1958) did not discuss their morphological variability in H. delicatulum  . Through the courtesy of J.E. Watson, I have examined a female colony from Southeastern Australia, assigned to Coughtrey’s (1876) species. All the stems were monosiphonic and the gonophores almost ripe. No apical projections could be detected, and the gonothecal aperture was situated in the middle of a slight depression.

I have also examined fertile specimens referable to H. delicatulum  , recently brought from southern Chile (Galea, unpublished results), and found pear-shaped female gonothecae (760–835 µm long, 560–650 µm wide) with rounded apex and the aperture situated in middle of a slight depression. Four to six large eggs (diameter 180–195 µm) were present inside each gonotheca. Their size and shape are similar to those from Antarctica [Blanco (1984a); Peña Cantero & Vervoort (2009) found gonothecae 650–1000 µm long and 750– 870 µm wide, Peña Cantero, pers. comm.], though all are smaller than Blanco’s (1984b) specimens from Mar del Plata, Argentina. On the other hand, the number of eggs in the Chilean material is in agreement with that (up to 6) reported by Blanco (1984b).

As seen from above and the available data from the literature, H. delicatulum  appear as an extremely polymorphic species, with stems either mono- or polysiphonic (though both bear gonothecae), internodes of variable length and shape (straight to geniculate), a hydrothecal rim more or less everted (in mono- vs. polysiphonic colonies), and female gonothecae variable in size, shape, and number of eggs. The characters of the trophosome share, however, much more in common than the female gonothecae in the various populations from around the world. All in all, it seems likely that that we are dealing with several closely-related, cryptic species.

It is therefore imperative to accumulate more material from various localities around the world, and undertake a wide morphological study integrated with molecular data, in order to solve this problem. Meanwhile, it seems most prudent to assign some of the southern hemisphere records of H. delicatulum  to Allman’s (1888) species. 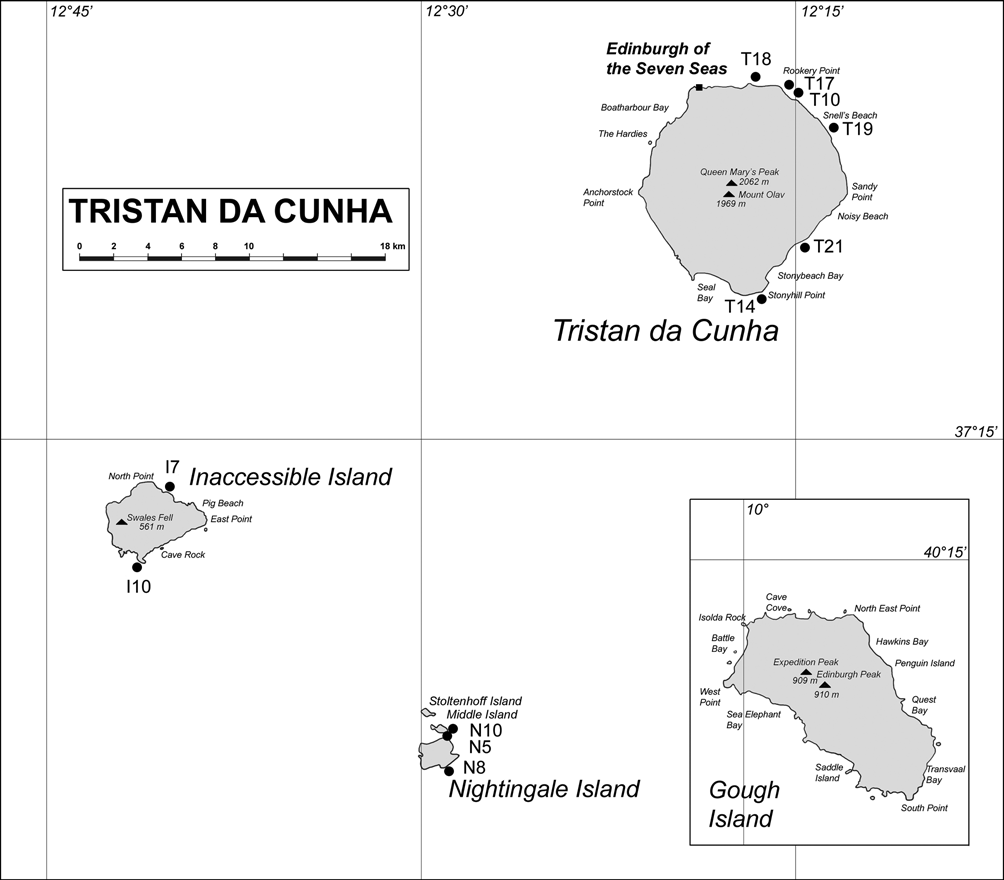 FIGURE 1. Map of the Tristan da Cunha archipelago, with the location of stations yielding hydroid material. 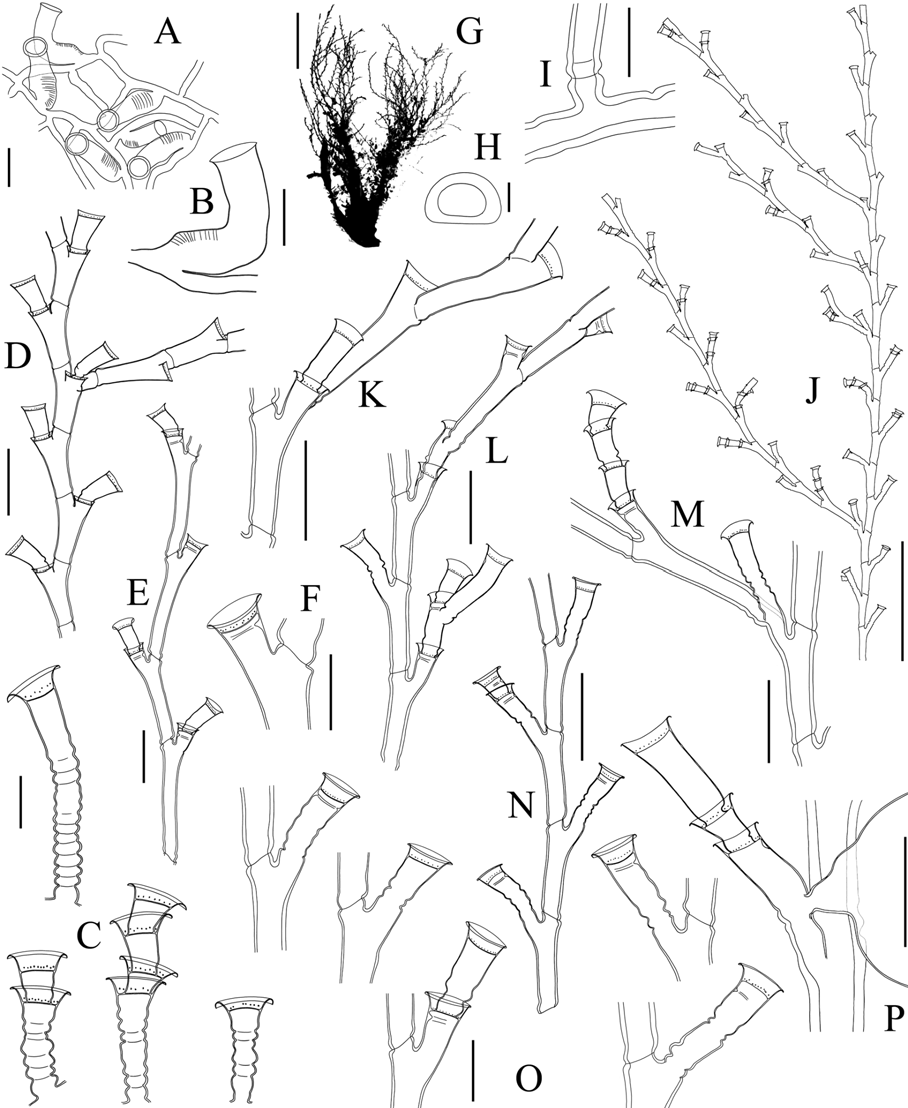