Description. Colony free-living, comprising a uniserial row of zooids following a strict pattern: each autozooid buds a distolateral daughter from a septulum on the right side, so colony grows in a clockwise spiral, forming a circle 1.4 mm external diameter, with succeeding zooids growing over earlier zooids.

In two specimens, first zooid of colony is different to other autozooids, being oval to rhomboid, symmetrical, narrow proximally; distally budding a typical zoecial series, proximally budding a vibraculum similar in shape to other vibracula but smaller and directed in opposing direction.

Remarks. Setosella folini  was originally described from two samples collected at 896 m depth off northwestern Iberian Peninsula and from a colony collected 1205 m depth south of Portugal ( Jullien 1882). Subsequently, Calvet (1907) recorded it at 555 m based on dead material also collected by the Travailleur south of Marseille and from 3700 m at the Canary Islands. A small fragment of three autozooids, originally labelled as S. folini  and collected by the Travailleur at 460 m south of Portugal, was also examined; this material has not been reported elsewhere. Some material from the Balgim sampling survey, reported by Harmelin and d’Hondt (1992) was also examined.

The autozooidal features and the shape and position of vibracula are consistent with placement in Setosella  . However, the species of this genus are mainly encrusting. D’Hondt (1974) pondered if S. folini  was merely a detached portion of the free rim of a specimen of Setosella vulnerata ( Busk, 1860)  . However, the distinctive ring shape of the colony and the lack of lateral fractures in the autozooids support the interpretation that S. folini  is indeed a free-living species that lives resting on the sea floor. Colony shape and the vibracular setae appear to afford either the stability to prevent burial and flipping over or the setae can right the colony if overturned. The setae are probably also used to prevent settlement of epibiota, deter predators and clean the area.

Many free-living colonies exhibit clockwise spiral growth ( Silén 1942; Cook 1965). In these forms, the ancestrula buds two vibracula, one distal and another proximal or proximolateral ( Cook 1965) as it is seen in the first zooid in colonies of S. folini  . Therefore, this zooid, which differs from later autozooids in its overall symmetry, may actually be an ancestrula, although evidently free-living. Generally in free-living cheilostomes, larvae may metamorphose on a sand grain or other small substratum or, less frequently, have no substratum ( Ostrovsky et al. 2009; A. O’Dea pers. comm. September 2010).

On the other hand, the origin of this first autozooid could be different. It shows a clear fissure in its proximal area, later covered by a small proximal vibraculum ( Figs 24View FIGURES 21 – 24, 27View FIGURES 25 – 28). The autozooids present two distolateral septula, inner and external. The first one produces a new autozooid, which also communicates with the proximal vibraculum, while the external one opens to the outer side of the colony. The development of a calcareous layer that encloses the upper part of this external septulum ( Figs 23View FIGURES 21 – 24, 28View FIGURES 25 – 28) may correspond to the beginning of a zooid bud. Silén (1942) described sporadic left-hand budding in S. vulnerata  , with ordinary budding to the right side. This may be the case in S. folini  . However, this left zooid must be different from ordinary autozooids, as its base must be narrow and cannot be connected to the distal vibraculum, which lacks a pore on its outer side. This might be the location where the first zooid from another free colony is budded. The right bud is rather robust, as the autozooid has a wide base also joined to the proximolateral vibraculum, while the left bud would be more fragile owing to a smaller point of attachment, making fracture easier. This could represent a type of asexual (clonal) reproduction, similar to the ‘clonal propagation by colonial budding’ described by O’Dea et al. (2008).

The ovicell in S. folini  has not been described and none has been seen in the studied material, unless it is represented by the slight swelling on the distal wall of two autozooids seen in MNHN 15487 ( Fig. 25View FIGURES 25 – 28, lower right part of colony). Di Geronimo et al. (2001: pl. 2, fig. 2) show what appears to be an ovicell with a frontal pore – typical of the genus –but this material might not correspond to S. folini  : the zooecial series is not very curved and slightly twisted (the first zooid and the last are not in the same plane); the autozooids are elongated and seem to present very small or even circular opesiules.

Many free-living species exhibit both sexual and asexual reproduction. For example, in the Cupuladriidae  many species have evolved to use fragmentation as their principal means of propagation ( O’Dea et al. 2008). Setosella folini  seems to have rather fragile colonies, as a great part of the studied material consists of short sections of a few autozooids (although breakage could also have taken place during collection). Regeneration seems to be frequent, as evidenced by Fig. 25View FIGURES 25 – 28, hence the species could use this mode of asexual propagation to create new clonal colonies with great frequency. On the other hand, the colony depicted by Harmelin (1977, pl. 1, fig. 8) could represent another form of growth, in which the last zooid in the ring does not overlap the first zooid but grows on the outside, creating an outer arch to the original ring. To conclude, it will be necessary to collect more S. folini  material to learn more about its growth, way of life and reproduction.

Setosella folini  seems to be a deep-water species that is distributed northwest of the Iberian Peninsula, south of Portugal, at the Canary Islands and off Marseille. The shallowest record (200 m) is from an upwelling area in the Canaries ( Harmelin 1977). Reports of the species from the southern Tyrrhenian Sea ( Di Geronimo et al. 2001) and northwestern Ionian Sea ( Mastrototaro et al. 2010), need to be confirmed through comparative study of the original material. 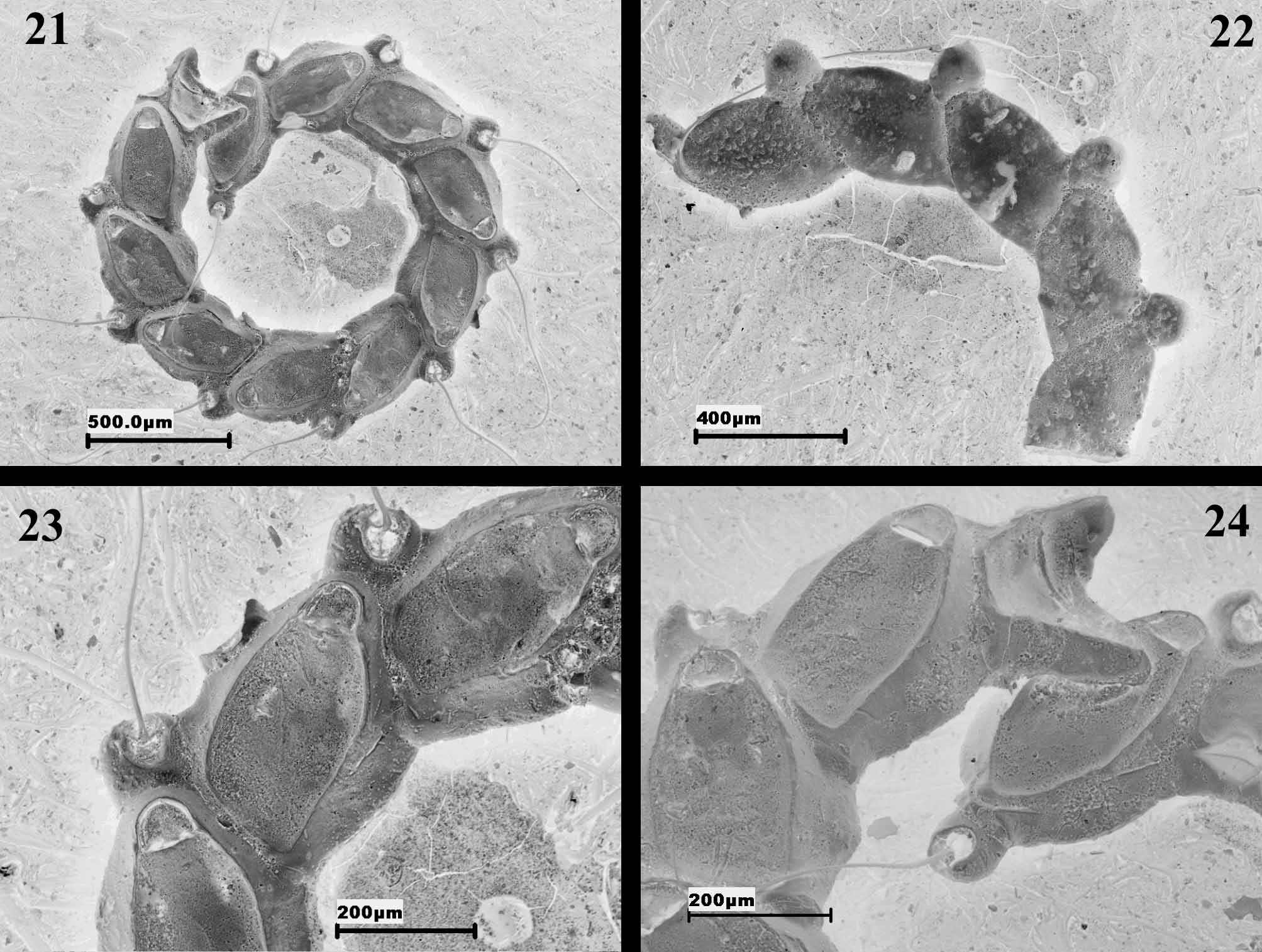