Diagnosis: The short forewing (maximum 8 mm long), the generally ‘washed-out’ ground colour, and the reduced forewing markings postmedially, with only a pair of short vertical dashes below costa between 2/3 and 3/4 wing length, will separate this new species from the other species of Samea  externally. The closest species in terms of size (wingspan: 7-9 mm) and genitalia morphology is Samea multiplicalis (Guenée)  (see Hayden, 2014, fig. 3). However, Samea inconspicuella  ( Figs 57, 58View Figs 57 - 64) is a darker moth than S. multiplicalis  ; its paler forewing markings are less conspicuous and in both wings the darker region along the outer margin is wider. In male genitalia ( Fig. 127View Figs 125 - 127) the uncus of S. multiplicalis  is longer and thinner, the ratio of the length of the uncus over the largest width of the valva being about 0.8 compared to 0.63. In female genitalia, the most conspicuous diagnostic character is the length of the lateral extension at the base of the ductus bursae, short and wide in S. inconspicuella  ( Fig. 173View Figs 173 - 177), about twice as long and narrow in S. multiplicalis  . Samea alophalis Hampson  and S. druchachalis Dyar  , are also small species, but the former has contrasting satiny white forewing markings, including along the postmedian line as in S. coffea  sp. n., but even more prominent, especially in the median and cubital sectors on the outside of the postmedian line. Samea druchachalis  also has more numerous and distinct white markings, touching dorsum medially and touching costa postmedially, and a distinctly checkered white and brown fringe.

Etymology: Named for the diminutive size and inconspicuous forewing markings.

Female genitalia (n=3) ( Fig. 173View Figs 173 - 177). Papillae anales of medium length, shaped like rugby ball, width about 1.6X length, not connected dorsally; sclerotized basal margin narrow, of equal length and shape on both sides of apophyses; posterior apophyses about twice as long as width of papillae anales, straight, without noticeable enlargement. Segment VIII long with tergum narrowing slightly to base of apophyses, then narrowing also ventrad of base of apophyses to about 2/5 dorsal length, with short setation homogenously placed on whole tergal surface, unsclerotized along midline except for narrow anterior band; without sclerotization of membrane ventrally; anterior apophyses barely subequal in length to posterior apophyses, thicker, with distinct enlargement subbasally. Intersegmental membrane posterodorsally from ostium bursae set with short, narrow scales. Ductus bursae with colliculum about 10% of length of whole ductus bursae, well sclerotized, cup-shaped, followed by indistinctly shaped section of same length but less thickly sclerotized and ridged, with third section mostly membranous but ridged at base, scobinated, and with lateral rounded enlargement sporting inception of ductus seminalis; distal 3/5th before corpus bursae of medium girth without conspicuous modifications of the membrane. Corpus bursae circular, half as long as ductus bursae and without modifications of membrane.

Biology: Unknown except for the habitats of the specimens collected which span from the low arid zone to the highest, pampa zone, and the collecting months, from January to May, as well as September and November.

Distribution: Galápagos endemic found so far on the islands of San Cristóbal, Santa Cruz, and Santiago.

Remarks: The unique male specimen available was dissected before the colour of the abdominal vestiture and some structures of the genitalia, such as the gnathos and juxta, could be documented. The simple, digitlike male uncus differs conspicuously from the bifid and apicolaterally spiny uncus of Samea ecclesialis Guenée  ( Fig. 137View Figs 136 - 137), the type species of the genus, S. castellalis Guenée  ( Fig. 125View Figs 125 - 127), and S. coffea  sp. n. ( Fig. 126View Figs 125 - 127). Perhaps this divergence would warrant a different generic association for this species, but a revision of the whole genus and related taxa would be necessary to arrive at a meaningful conclusion. Samea multiplicalis  is reputed to occur worldwide and its larva is known to feed on aquatic plants of the genera Azolla  ( Azollaceae  ), Eichhornia  ( Pontederiaceae  ), and Salvinia  ( Salviniaceae  ) ( Robinson et al., 2014). Both the former and latter genera occur in the Galápagos (Jaramillo Díaz & Guézou, 2015) and would be the first to check for potential hosts to S. inconspicuella  . 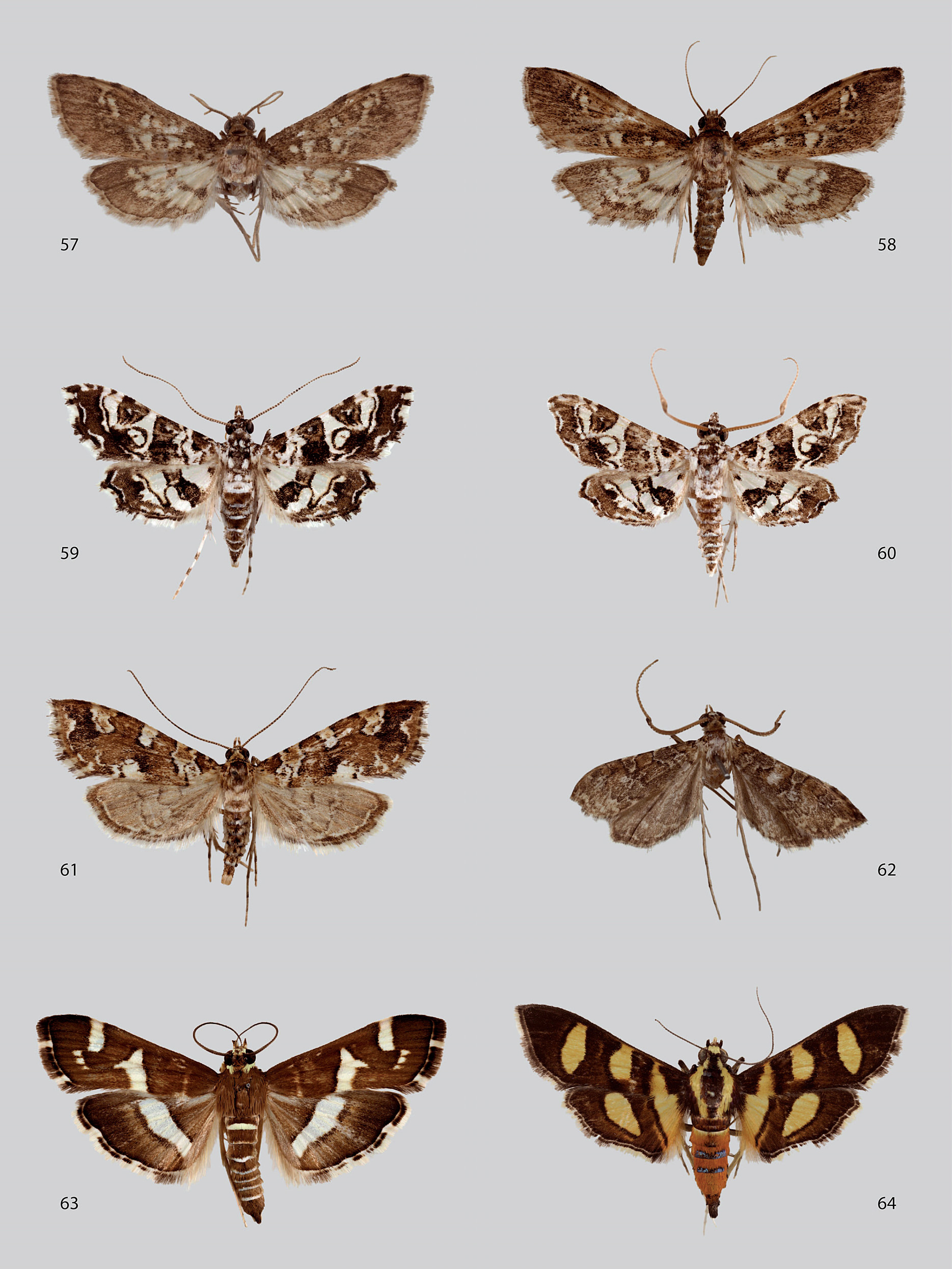 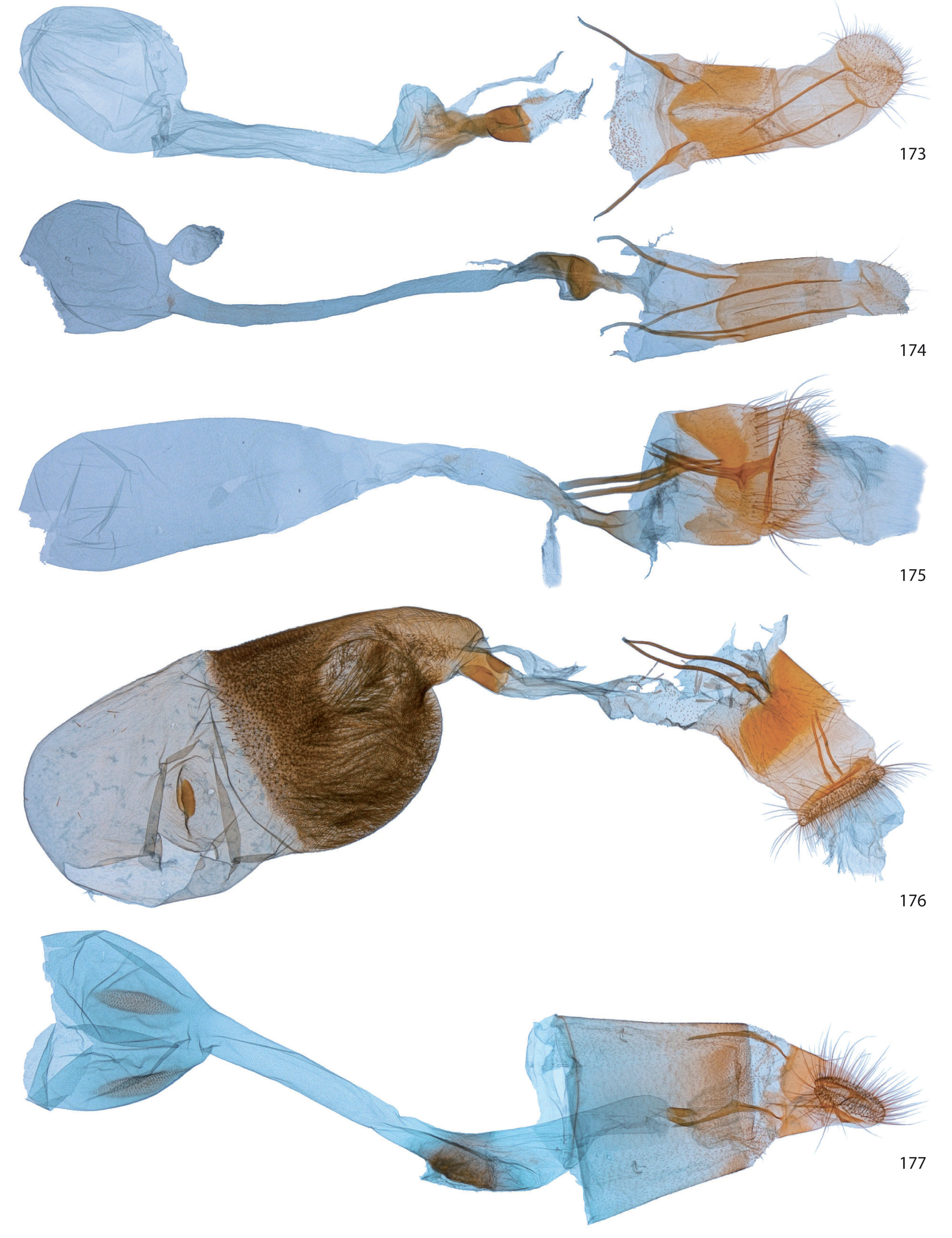 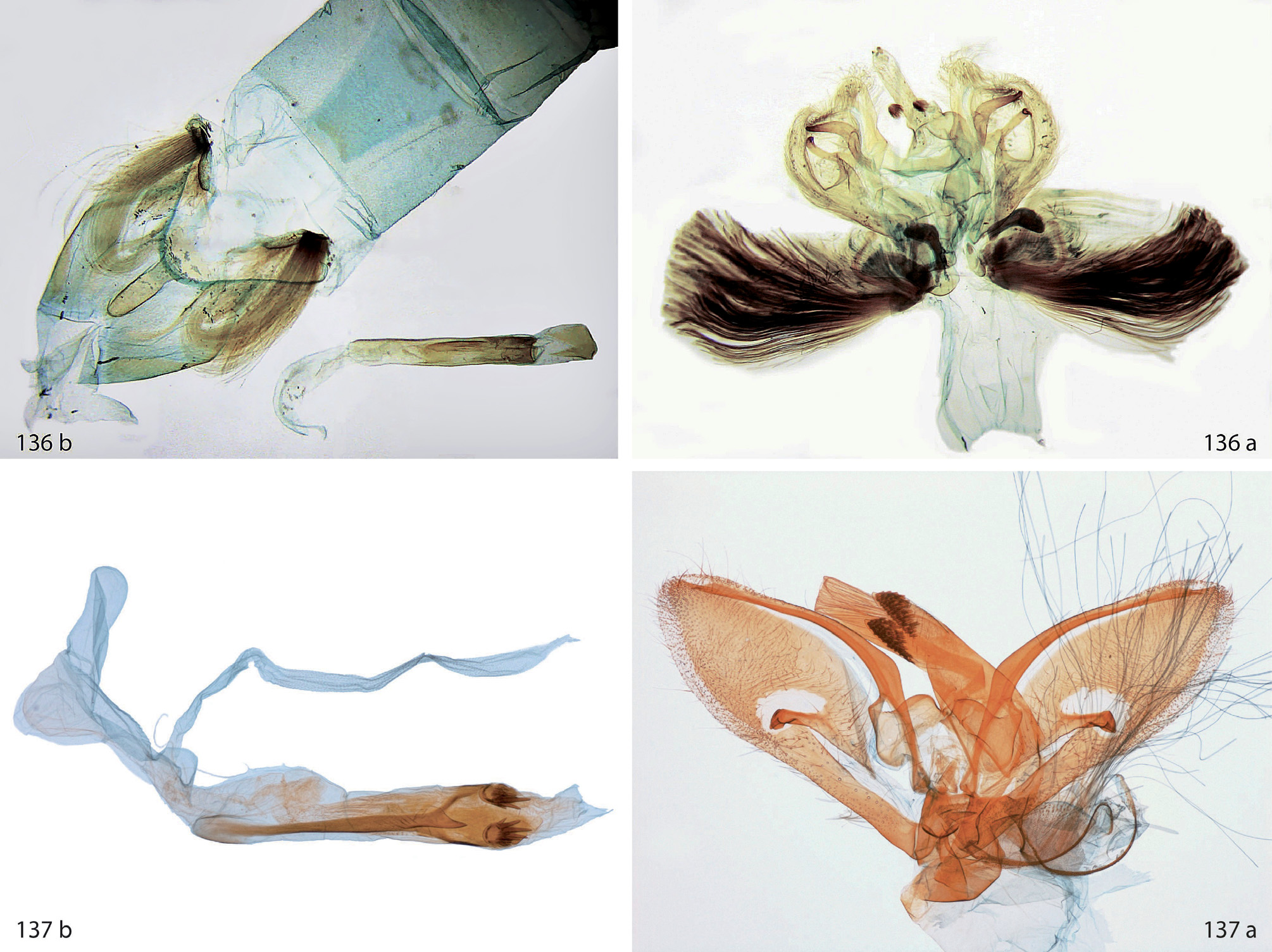 Figs 136 - 137. Male genitalia of Neotropical Spilomelinae, a and b from same slides, but not to scale, (a) showing the genitalia without phallus and (b), the phallus. (136) Asciodes gordialis lectotype with b showing also the tip of the abdomen. (137) Samea ecclesialis: slide MHNG-ENTO- 8709, Brazil.