Diagnosis: This species is most similar in the morphology of the genitalia to D. glauculalis ( Guenée, 1854)  , and differs primarily in the male by the sclerotization in segment VIII where the u-shaped sclerotization of the sternite tapers in apically and is less broad than the base and the tergite sclerotization is almost the same width or only slightly expanded posteriorly. In the female, the corpus bursae is broad or bulbous-shaped after the ductus and the two round signa are adjoining with short extensions, longer than the base. It differs externally from D. glauculalis  whose wings have a conspicuous green shade, forewing length and wingspan slightly larger (> 16 mm and> 35 mm respectively), and males without modified segments on the antennae and without a fold along the forewing costa ventrally. In the Galápagos this species ( Fig. 14View Figs 9 - 16) is only externally similar to Palpita flegia (Cramer)  , but it is smaller with a wingspan 24.0-32.0 mm versus 50 mm in P. flegia  ( Fig. 40View Figs 33 - 40). Also, the forewing costa of D. costata  is brown whereas that of P. flegia  is blue.

Etymology: The new name refers to the area of occurrence of this species.

Biology: Perry & de Vries (2003), under the name Margaronia limitalis Dognin  (a different, similar species), report the food plant in the Galápagos as Vallesia glabra (Cav.) Link  ( Apocynaceae  ). Specimens were collected from the arid or littoral zone, on the grounds of the CDRS, to about 850 m in elevation on Santiago, in various types of habitats and in January, March until May, October, and November.

Distribution: Galápagos endemic for which we have examined specimens collected on Floreana, Isabela, Santa Cruz, and Santiago. Perry & de Vries (2003) also mention it from Floreana.

Remarks: This species belongs to a complex group of 16 ‘white/greenish/brownish’ Diaphania  species that includes misplaced species in Munroe (1995), new species, and species from other genera (e.g. Palpita  , Hoterodes  ). They have in common a short phallus and a short ductus bursae (manuscript in prep., MAS).

BL initially identified a Galápagos specimen of this species as D. glauculalis  by comparing it with specimens in the BMNH, including the female holotype, although the latter is without an abdomen. The species was described from a single female, without indication of collecting locality, although Guenée (1854: 306) mentioned that he believed it to be ‘américaine’, i.e. from the Americas. However, the description of D. glauculalis  , which records the wingspan as 37 mm and the wings as whitish green, supported the conclusion that the smaller Galápagos specimens are not this species.

Diaphania costata (Fabricius)  is externally similar to D. galapagensis  and unknown to occur in the Galapagos Islands. The type was studied because the species was only known from the original description and it seemed similar. The lectotype of Phalaena costata Fabricius, 1775  ( Figs 73, 74View Figs 73 - 80), deposited in ZMUC is here designated: ♀, ‘P: costata’; ‘Mus. Seh. & T. L.’; ‘ LECTOTYPE | Phalaena  | costata Fabricius  | Des. B. Landry, 2015 ’. The wings of this specimen are unspread but the forewing length is 13.0 mm. This species belongs to another group of species, exemplified by D. costata (Fabricius, 1775)  , that have a long phallus and a long ductus bursae ( Fig. 182View Figs 178 - 183) (manuscript in prep., MAS).

There is no specimen of Phalaena costata  in Fabricius’ personal collection in the ZMUC, but there is one in the collection of Sehested & Tønder-Lund (O. Karsholt, pers. comm.), also in the ZMUC. Ole Karsholt (pers. comm.) also wrote ‘It is not clear from the original description if Fabricius based the description [of costata  ] on a specimen from the Sehested & Tønder-Lund collection, and it can also have ended up there later on.’ Thus, this specimen ‘should be considered as a potential syntype.’ and is here designated lectotype upon O. Karsholt’s recommendation as it agrees with the current concept of D. costata  . Ove Ramel Sehested and Niels Tønder Lund lived in Copenhagen and were pupils and friends of Fabricius ( Baixeras & Karsholt, 2011). According to Tuxen (1959) cited in Baixeras & Karsholt (2011), ‘about one third of all Fabrician insect descriptions are based on material in the Sehested-Tønder Lund collection.’ 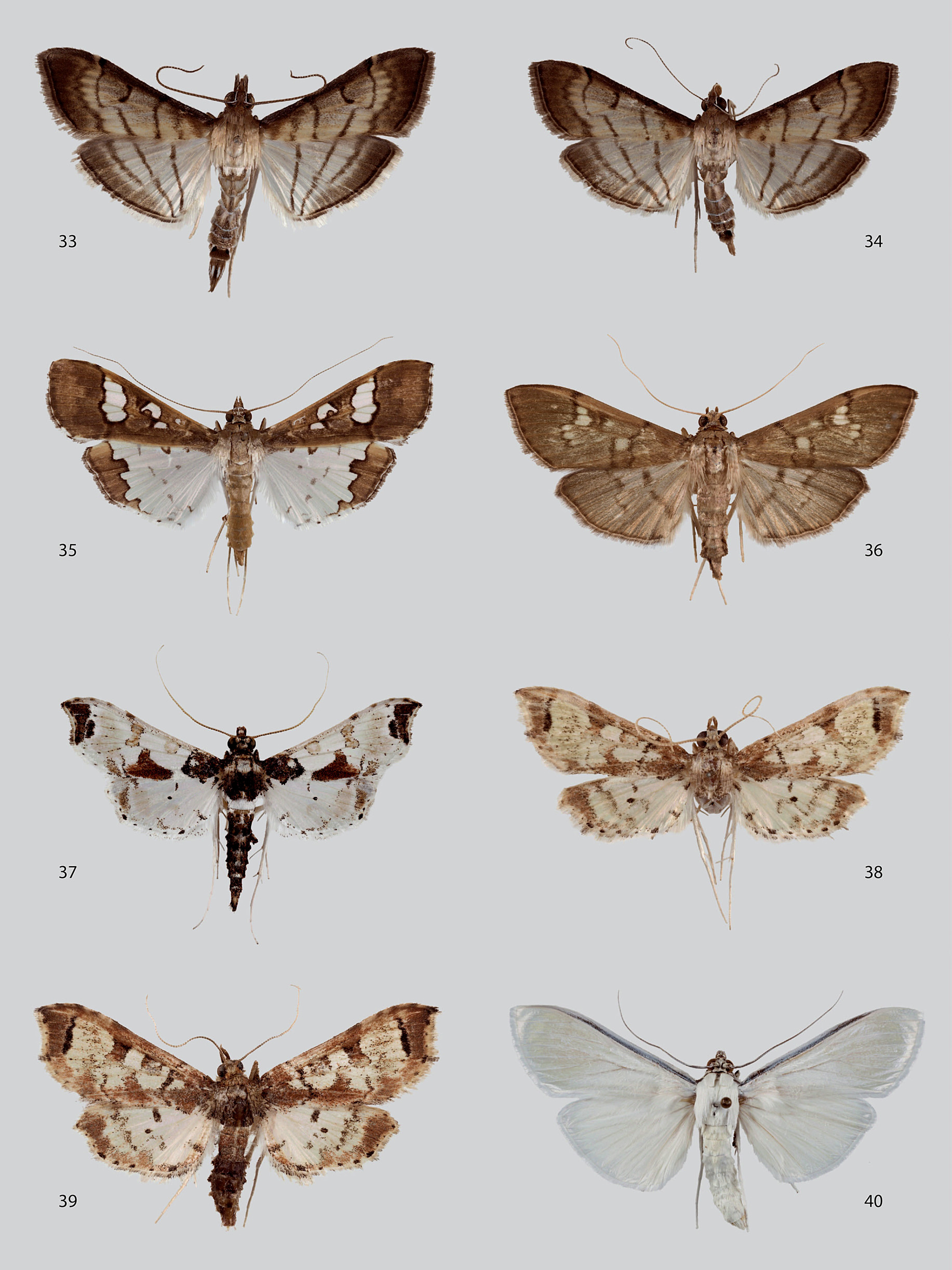 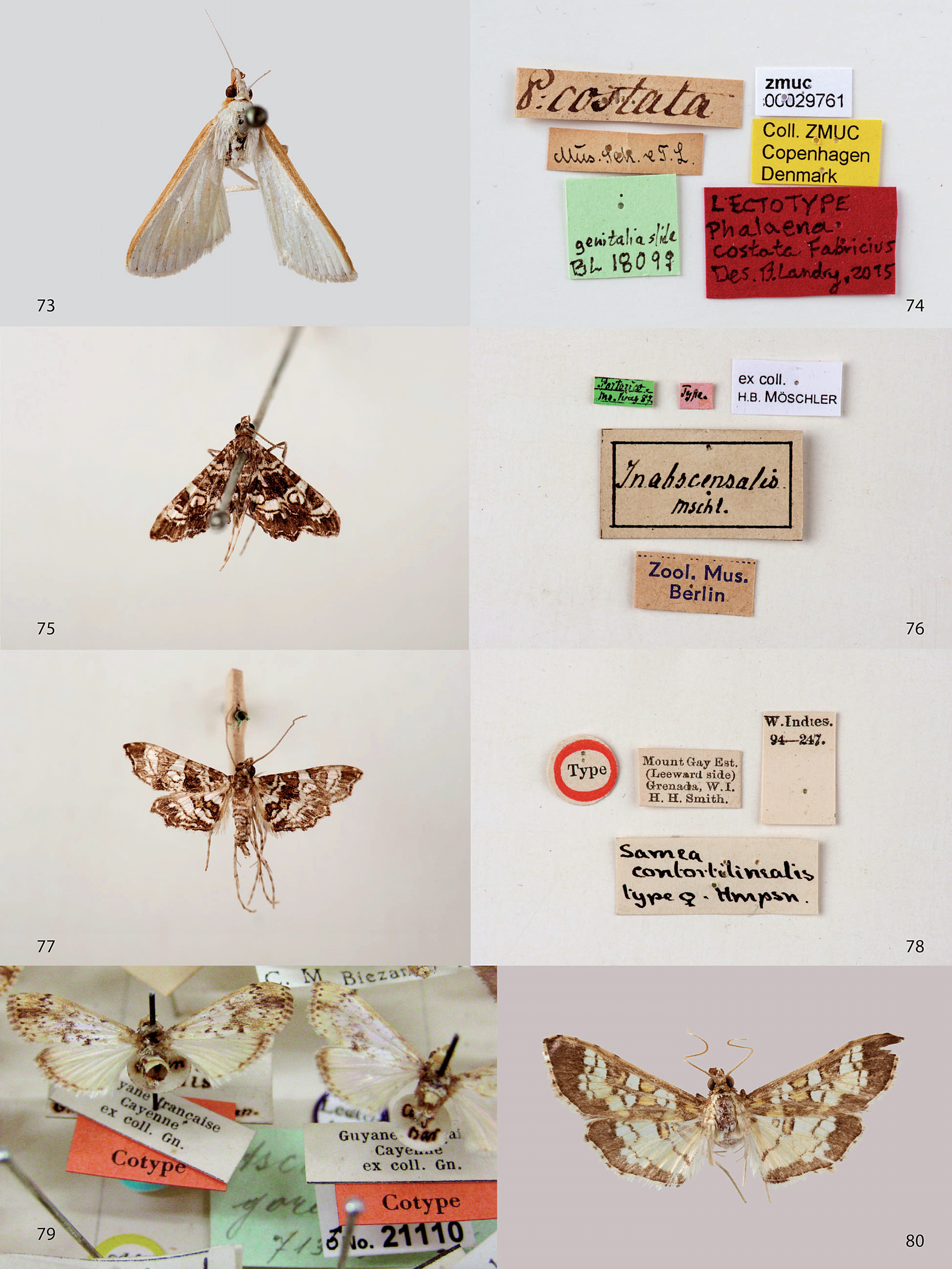